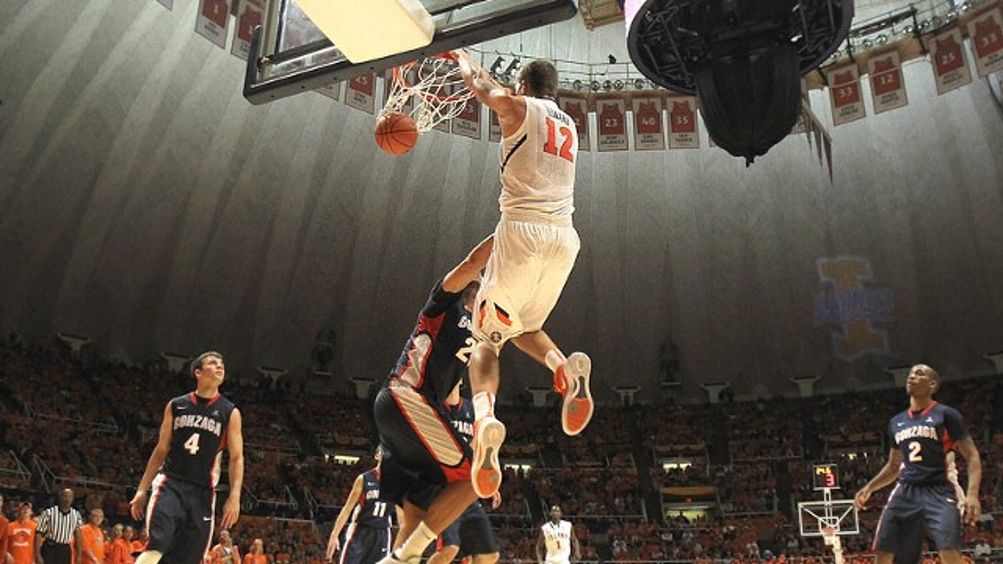 Welcome to the Second Annual YouTube Dunk Video Draft! Last year, we brought you the glory of Jonas Valanciunas, Donatas Motiejunas, Jon “P.I.M.P.” Leuer, and Jan “The Dunking Ninja” Vesely. This year, the rules are the same — we evaluated every NBA hopeful on the merits of his highlight video, taking into account production value, font choice, video filters, dunk ferocity, block ferocity, and the always-vital music choice. The draft order was determined by who GMs would pick if they had nothing to go on but the coolness of each player’s YouTube video. That’s why you don’t see Harrison Barnes, Anthony Davis, or Jared Sullinger on this list. Because their videos were terrible.

Without further ado, we present the top five picks …

1. Fournier plays for a team owned by Sidney Poitier.1

2. Fournier convinced Inception director Christopher Nolan to take time out of his cinematic schedule of bending time and blowing up football fields to travel to the Continent and film the “French Knight Trilogy.” (This is less far-fetched than it might seem, since the credits to “Evan Fournier highlights in slow motion” parts 2 and 3 show that those videos include music by the legendary producer Nist, of Cookies Swag. But seriously, the camera work in these videos is so good that it makes Fournier’s stubble look like poetry. Certain clips in part 1 made me blurt out, “Was that a crane shot?”

3. The French Pro A league will allow you to set up dolly tracks and a crane on the baseline, so filmmakers like you can make the athletes look that much more amazing. Orson Welles got the idea for his famous tracking shot at the beginning of Touch of Evil while sitting courtside at a Poitiers game.

4. The official ball of the French Pro A league is the $14.99 black-and-red outdoor Spalding available at a ShopRite near you.

And if all that is true, then Evan Fournier is not merely a basketball player likely to be selected somewhere near the end of the first round in the 2012 NBA draft. He is the Most Interesting Man in the World.

Or, you accept none of these statements as true, and you concede that these videos are the work of a French master video forger. They are the best-looking fake basketball scenes I’ve ever laid eyes upon — better than White Men Can’t Jump, Like Mike, Just Wright, Juwanna Mann, and the scene in The Kids Are All Right in which Mark Ruffalo chest passes the ball off the backboard a few times.

The truth is out there.

Someone please forward this to Cole Aldrich and tell him to hurry up and write an open letter in support of Chris Brown, because his reign as the NBA’s biggest asshole is about to come to an end. Tomislav Zubcic does everything Cole does, but better. He has a dickhead haircut, he does terrible chest bumps, he struts up the court, he makes dunk videos to the instrumental track for “Smooth Criminal,” and he apparently doesn’t do anything but throw down and shoot from a distance. Seriously, has anyone made a worse impression in 94 seconds of video? Maybe the district attorney in the West Memphis Three trial? Maybe Canibus when he pulled out a notebook in his battle against Dizaster? Maybe Adele in that never-aired sex tape?

0:18 — Wide-open 3-pointer. Flexes and starts screaming again. Tomislav seems like a real joy to play with.

0:38-0:46 — Hits a 3 with a guy somewhere in his vicinity. Throws out the arms like Scott Stapp while running backward down the court. THEN HE THROWS IN A TIGER WOODS FIST PUMP AT THE END. I understand that years of living behind the Iron Curtain have restricted your personal expression, Tomislav, but we live in a free world now and you have the rest of your career to do silly celebrations. No need to stick two of them together back-to-back and make everyone fucking hate you.

1:10 — Tomislav has apparently dunked a grand total of four times in his life, because we already saw that dunk at the start of the video and we already saw you yell at the main character from Grand Theft Auto IV.

The video starts with a blocked shot anyone over 6-foot-5 should probably make. Then the Common track kicks in and we’re treated to 30 seconds of Meyers passing out of double-teams. My personal favorite, aside from the dribble handoff at the 33-second mark, is the rebound and pass at 0:51. For reasons unclear, Leonard has just made his way to the top of the key when the ball careers off the rim and through a defender’s hands and into Leonard’s. Saying he “caught” the ball before making the pass would technically be correct, but it was more an act of self-defense.

As a teammate slashes into the lane, Meyers is there to take the pass and put down the two-hand flush. At this point, I’m thinking the final 30 seconds are going to be a smash-cut whirlwind of rim rocking. Sort of. Apparently, Meyers Leonard had so few dunks last year that among the impossibly unimposing throw-downs, the most exciting play is a dunk he actually misses. At no point in this video does the Illinois bench jump up quicker than when Meyers fakes a dribble handoff at the wing, takes two dribbles, and clanks it off the front of the rim while killing the defender underneath him. It all makes sense now. Excuse me while I go watch the one where he cries.

If someone unfamiliar with sports were to view “Will Barton: The Journey Continues,” the only logical conclusion would be that Will Barton is the greatest athlete in the history of the planet. I only know this because I’m someone who is pretty familiar, and that’s the only thing I could think as the video ended.

I have no idea who “Jenksz2k7” is, but I have to assume that in the 19 days since this video went up, he was hired by Paramount to make the trailer for every movie they ever put out. Half of this video is footage from an intersquad scrimmage, and it still feels like the most epic sports moment since hockey won the Cold War. Never has a guy wearing sunglasses indoors compelled me more to go out and do something better with my life. I don’t want to know what he could do with some strings and a few clips from Remember the Titans. Two minutes of that, and my body would be physically unable to produce any more tears. You know what? Scratch that. This dude directed Remember the Titans. There’s no other explanation.

This dunk track comes to us from an emcee named Macklemore, who kind of sounds like what would happen if you took Slug from Atmosphere, dumped a few buckets of bleach on his head, and made him work for a month in the rock-climbing gear section of REI. On the surface, “Wings” is about the senseless violence that has irreparably changed sneaker culture, but because Macklemore is from Seattle and because the song references all sorts of “air bubbles,” and shit that “makes me fly,” the song is probably actually about heroin, so when you see Macklemore and he’s fitting you with a new harness and a chalk bag and you say, “Hey, I really liked that emo sneaker song you did,” he can say, “Bro. That shit was about heroin.”

That’s when your mind gets blown.

So, to review: Sneakers = Heroin.

0:00-0:30 — What iMovie filter is this? Because it’s in like every dunk video now and it’s awesome. It makes everyone look like they’re standing behind Abraham Lincoln with a loaded gun or standing next to Henry Ford as the first Model T rolls off the production line. Whoever made this “retro” video filter, please hit me up at @jaycaspiankang, because my own highlight video needs some work.

OK, enough self-promotion. Back to Kostas.

0:58 — Snap back to reality. Whoops, there goes the filter — we’re back to the present, in which Kostas is putting in work for Olympiakos.

2:28 — “That’s my air bubble and I’m lost … if it pops” just as Kostas pops a mid-range jumper. Honestly, we’re reaching Jan Vesely Dunking Ninja levels here. This is the best highlight/dunk video I’ve seen this year. And I’m someone whose Gchat light is always green because I’m out here putting in work for all of you.

4:15 — Who is that familiar dude with long hair who just got torched by Kostas? Hmmm …