Mocked Up: Grantland on the 2012 NBA Draft 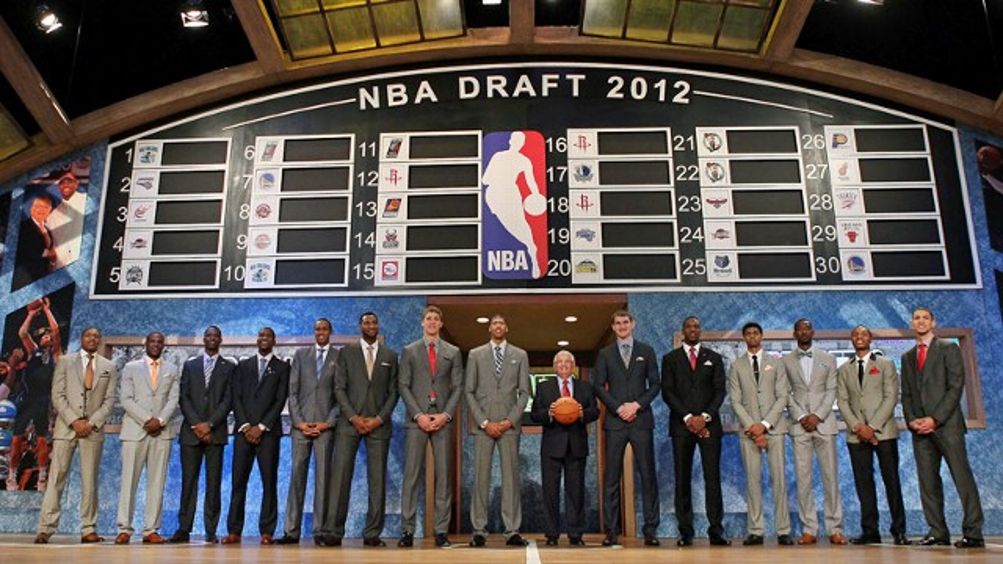 Usually, the NBA draft concludes with the top half of the first-round draftees gathered around Commissioner David Stern for a group photo. It’s both something for the yearbook (behold, the Class of 2012!) and something for the look book (behold, those clothes!). This year, the 14 guys gathered around Stern stood with their hands folded over their crotches, looking ready for a penalty kick from the fashion police.

The class of ’12 was a downer: a chorus line of slate gray, light gray, marbled gray, dark gray, gray-gray, F. Gary Gray. Fellas, really: Happy happy joy joy. It’s summer. You’re done with school. You’re rich. These weren’t clothes that told any of those stories. These were clothes that — on these long guys, arranged side by side in those colors — looked like the pillars of an ancient temple. The crowd, of course, had preordained that comparison minutes into the ESPN broadcast when it vociferously booed Stern’s arrival and continued to do so 29 more times. Despite only making Stern stronger in a Kelly Clarkson sort of way, the booing was good Roman Senate stuff. The clothes were something else. 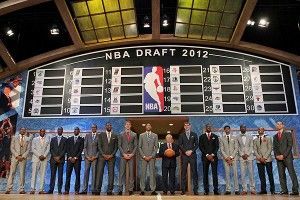 Whose idea, for instance, was Damian Lillard’s blazer with the screen-door checks? The jacket had a two-tone lapel over a black tie and vest with a red splotch for a pocket square. The black pants were a mercy; that pattern spread over 96 inches or so might have been actionable. The pants lent the jacket and shiny tie some casualness. He was a cool prom date instead of a nervous one.

Style-wise, every name Stern called held the promise of possibility. We’ve seen these gentlemen play, but we haven’t really seen them dress. So who among them might be the next Russell Westbrook and start showing up to games in couture cabanawear? Who might go further out on a limb of serious-minded ridiculousness than LeBron James and Dwyane Wade did this year? We want to see the future and we want to see it now. Yet it took Westbrook a few years to figure out that he wanted to look like an independent filmmaker in a graphic novel.

I think the anticipation for fashion at these draft ceremonies has become totally misconstrued. Since players rarely wear anything truly inspired or outstanding to any draft, and since most draftees tend to wear the opposite of inspired and outstanding, anyone watching the clothes is doing two contradictory things: hoping for the best and rooting for the worst. It’s worth remembering that when James was drafted, in 2003, he came dressed as a bar of Dove soap. 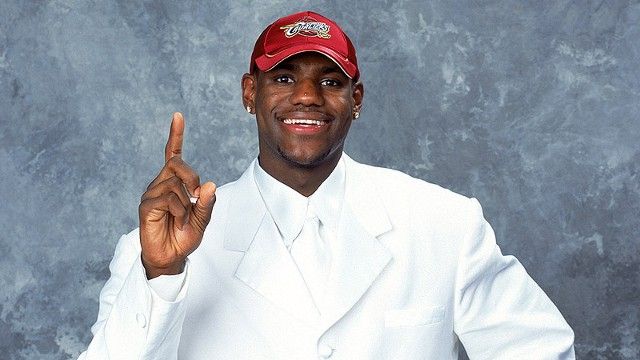 This is an event rife with the potential for tragedy, for cheapness, too-muchness, and preacher-y, pimpy, ambulance chaser-y badness. Sometimes all that bygone tackiness reminds you how far the league has come. It was only five years ago that Joakim Noah wore a floppy bow tie and badly tailored, latte-colored seersucker suit for his closeup with Stern. And in 2002, Drew Gooden showed up in a full-length hidden-panel jacket that made him look like a giant Baptist-preacher robot. You want to see clothes like that, but not all the time. What you want is someone with a sense of adventure — great or awful, it doesn’t matter. You want to see a star. But the last two or three years of NBA draft attire have inspired mostly shrugs.

Since the dress code, players have been obligated to explore how “respectable” and “professional” translates into cool, wearable clothes. Apart from international soccer, to which the NBA runs a distant second in the sartorial effortlessness department, basketball has become the American sport whose stars’ sense of style compels some of us to watch as much as their play does. That shift has certainly elevated the quality of clothes you see at the draft. But it’s also removed the risk and danger. It’s disaster-proof now. Not even Lillard made you ask, “What was he thinking?” because what he was thinking was perfectly obvious: “Girl, I’m going to ditch these chaperones, bring you back to the limo, put on some Jodeci, and shake you down.”

That’s too bad. The clothes in the vividly overdone preproduction that kicked off the draft broadcast were so promising. The top candidates stood awash in sidelights, and fedoras, vests, tweeds, suspenders, and paperboy caps — or something like that — ready to climb ladders into the rafters. It was silly, aspirational kitsch. It was also like the start of a number from Newsies, the movie-musical that’s now a Broadway musical, about young men being exploited by their corporate bosses. I’m sure any similarities between the show and the draft were just an unfortunate coincidence. But when Austin Rivers — in the vest and newsboy cap and a shirt that didn’t fit — began to mount his ladder and glanced over at Andre Drummond, whose gaze was skyward, there appeared to be a show tune glimmering in his eyes. Of course, once the climbing began, what you noticed was that the players were merely at another combine, styled for fun that their clothes weren’t having once the actual show got under way.

There were exceptions. The Raptors picked Terrence Ross, who looked like a lawyer at the annual Hugo Boss picnic. He went for a marbled gray suit and a bow tie, and he should be happy he did. The tie at least implied some thought beyond the usual power ties. It was big and green and, if chewed, would leave your breath minty fresh. Even better was Michael Kidd-Gilchrist, who made the best of being drafted to the Bobcats by wearing a silk knit tie, blue suit, tie bar, pink lapel, and a scalene pocket square. It was busy, but the accessories were at least affixed at the same latitude. The shoes were smoked-brown leather wingtips, and the TV cameras couldn’t do them justice. Yes, Rivers is the son of the best-dressed coach in the league. But of this batch, I’d say Kidd-Gilchrist is the one whose clothes we should watch.

Then there’s Anthony Davis. He was widely predicted to be selected first (and went to the Hornets) and wore nothing special to celebrate. It didn’t matter. He now has the chicest face in the NBA. The thick dark lashes on the light skin; the face that’s secretly wider than it is long; the eyes that are big, the nose that’s bigger, and the lips that are biggest; the single, half-mile eyebrow that should never, ever be touched; the carry-on beneath each eye. Davis’s face is handsome and ugly, feminine and masculine, canine and feline. It’s something Picasso would have painted. It belongs in the Louvre and might be all the style Davis needs. 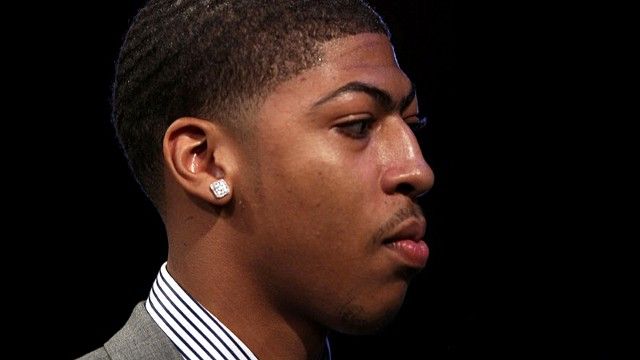 Still, it would be nice to see that face paired with a garment that had a little funk. How many of the guys this year accessed professional styling is unclear, but the collective goal seemed simple: Do not screw up. Better to bore people than appall them. You’ll have the rest of your career to find a persona, to become an icon, to dazzle people. In the meantime, put this on.

For the most part, “this” meant “dignified.” Over and over, in the press and broadcast previews and during the draft itself, we were told that this year’s class was rife with young men of heart and character. What a batch of smart guys and selfless teammates and saints the NBA was getting. For example, in the course of a month, Thomas Robinson, who’s going to the Kings, lost his mother and his grandparents, and is trying to win custody of his 9-year-old sister. He’s got a lot going on. It makes sense for him to want to wear something that complemented his heavy mood. That would explain both the three muted pieces he wore and the enormous wristwatch, which was simply physically heavy and appeared to be encrusted with minced disco ball. Like almost everyone else, Robinson was dressed for self-conscious personal safety more than any particular fashion statement.

The whole idea of being part of a business that drafts, trades, and owns you is surreally, almost farcically loaded, and it’s probably better for everyone not to enter into that bargain dressed like a fool.

That’s understandable. You want civility on an introductory stage like this because, inevitably, the draft evokes the tired presumptions about race and what a black basketball player should wear and how he should act. Black men always know two audiences are watching — their mothers and white people (sometimes, as with Austin Rivers, the mothers are white) — and you can make both parties happy just by putting on a tie. Of course, the whole idea of being part of a business that drafts, trades, and owns you is surreally, almost farcically loaded, and it’s probably better for everyone not to enter into the bargain dressed like a fool. Stern will always want you to know that you’re not in his league, you merely play in it. One way to impress him would be to dress like a businessman and not a rapper — or what one presumes are Stern’s and the team owners’ ideas of the difference (there’s not much of one anymore).

Stern imposed the dress code that altered the psychology of the sport and the culture that surrounded it, and you get the sense that he loves wielding the authority that caused that change to happen. So it’s all personal and political, and do you really want to have to think about David Stern when you’re getting dressed on the biggest day of your life? No, but there you are putting on that power tie and thinking a little bit about him and his power. Maybe you want to rebel and wear something crazy, but maybe crazy is the wrong message to send before you’ve even started work. Maybe this is your first suit and your first adult job, and maybe that’s all the crazy you can handle at the moment.

What’s also at work here is just the wonderful, terrible history of the draft, its implications, and what, emotionally, is happening for these guys. It’s an amazing day that’s also a rite of passage, and as much as some of us are looking for signs of a new press conference star, the draft, alas, might not be the right place for cabana shirts and cosmetic eyewear. Despite the harsh impression that taking that stage and greeting Stern is like shaking hands with the devil, it’s also a little bit like going to church and getting confirmed. Now you’re free to practice your religion. God willing, that will one day mean wearing something better than your Sunday best.