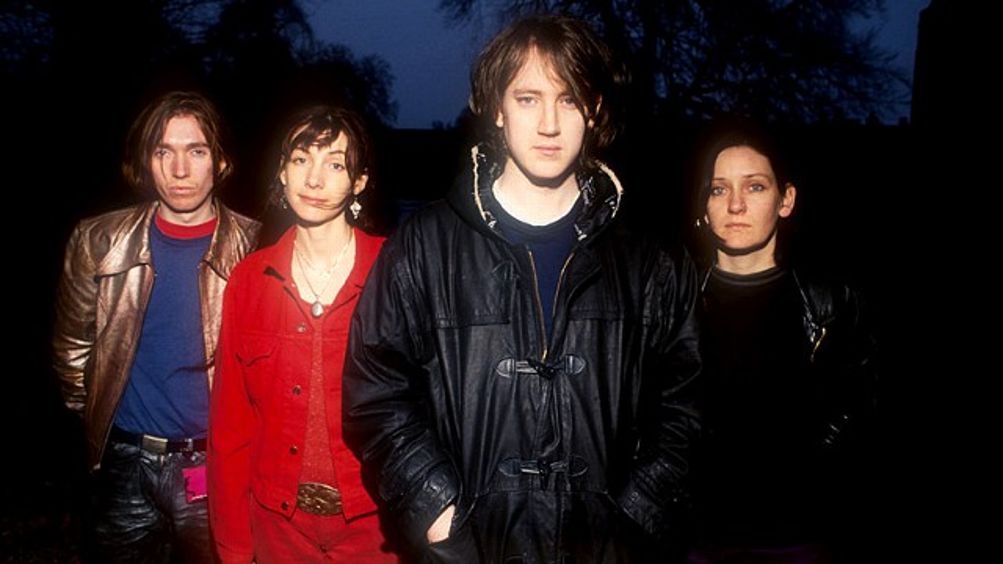 If you visit this site regularly, it’s safe to assume you enjoy conversing about sports and pop culture. But you probably enjoy talking about sports more. And that’s likely the case because sports have ground rules we all agree on. There is really just one important rule: Athletes only win when they win. There’s nothing awesome or coolly romantic about Tony Romo self-destructing like Johnny Thunders in the fourth quarter; not winning only makes you an easy metaphor for failure. Whereas in music, for example, success exists purely in the mind; it’s not exactly imaginary, but it’s certainly not set down in solid terms like on-base percentage. It’s possible to lose quantifiably (i.e., not sell any records, suffer a fatal overdose, collaborate with Damian Marley) and still be regarded retrospectively as a winner.

This makes answering a seemingly simple and straightforward question like “What is the greatest rock album released since 1990?” a frustrating and unsolvable quagmire. If music were like sports, the answer would be easy: It would be Metallica’s self-titled 1991 LP, better known as “The Black Album,” the most successful record of the SoundScan era with more than 15 million sold. In terms of moving units, “The Black Album” is the early ’90s Cowboys. But music is not like sports, and “The Black Album” is maybe the fourth-best Metallica record. Sometimes when musicians win, they really lose.

It’s generally accepted that in the last 20 or so years, rock music has shifted from a form of mass entertainment to a marginalized niche that no longer powers the motor of pop culture. Rock has walked the same lonely path as The Legend of Zelda and the Wayans Brothers to this point. This further complicates the “greatest rock album since ’90” question. Along with “The Black Album,” there are four mass-appeal rock records from the past two decades that are “great” in the way old-guard rock classics are great: Nirvana’s Nevermind, Pearl Jam’s Ten, U2’s Achtung Baby, and Radiohead’s OK Computer. These records have sold millions and are commonly seen as touchstones and reference points for their time; even if you don’t like these albums, you’re at least aware of them, and likely know many of the songs.

And that’s the problem: Our culture’s no. 1 most-valued property for music is convenience of selection. Picking one of these records as Our Greatest Album is uninspired. It’s this sort of thinking that posits Nevermind as overrated, or at the very least inferior to something like Slint’s Spiderland.

What good are touchstones in an era where consensus seems to actively annoy people? In terms of contemporary rock records, “greatest” might be better suited to an LP that represents the genre’s prolonged post-mass period. Perhaps the greatest rock record of the modern era shouldn’t be well known, but elicit blank stares and shoulder shrugs from 95 percent of the population, because that’s the realm rock inhabits now. If that’s the case, let me introduce you to Loveless by the enigmatic Irish group My Bloody Valentine, the greatest guitar-rock album of our greatness-averse age.

Released in 1991 and reissued last month in a hotly anticipated two-disc remastered edition that’s (of course) available only as a U.K. import, Loveless is hardly obscure if you happened to care about alternative rock back when the name Dave Kendall still meant something. The brilliantly bald rock theoretician Brian Eno once said that Loveless “set a new standard for pop”; conversely, brilliantly bearded jam-band instrumentalist Trey Anastasio called it the best album of the ’90s. Loveless didn’t go wide, but where it hit, it penetrated deeply. It has sold in the neighborhood of a quarter of a million copies, and influenced almost as many bands.

For everybody else: My Bloody Valentine is a four-piece group from Dublin, Ireland, headed up by a perfectionist genius named Kevin Shields. When My Bloody Valentine was at its creative peak in the late ’80s and early ’90s, it was well regarded by those interested in anti-commercial European art-rock combos. But MBV didn’t become legendary until it entered an extended hiatus after the release of Loveless, the group’s second full-length album. (This hiatus continues to this day, though a new My Bloody Valentine album and EP are supposedly on the way later this year. If you’re new to Loveless, you’ve discovered it just in time to be disappointed by whatever Shields puts out next.)

As anyone familiar with the record’s oft-told legend will tell you, Loveless was recorded in 19 different recording studios over the course of two years. Shields hired and fired a battery of engineers in a maniacal pursuit to capture the sound rattling in his head, and in the process spent so much money that he nearly bankrupted his label. This might make Shields seem like some kind of single-minded weirdo visionary in the mold of Brian Wilson or Syd Barrett. But Loveless was merely the work of an imaginative sonic architect who trial-and-errored his way to inventing a whole new way for a guitar-based band to sound.

Listening to Loveless is not unlike the sensation of having just endured a two-hour sonic hurricane, then feeling an intense yet melodic pounding in your eardrums for the next week. And I mean that in the most pleasant way imaginable. What took so long for Shields to find in the studio was the ecstatic pleasure point buried in the suffocating psychic evisceration caused by pure unadulterated volume. On most rock records, the music drowns out the lyrics; on Loveless, the music drowns out the music. The songs are packed dense with multi-track vocals, distortion, tremolo guitar licks, drum loops, mechanical squeaks from robot zoo animals, the sweet moans of clouds mating, and other sound bites from a terrifyingly beautiful rapture. On many tracks, it’s as if the actual song that you assume is in the middle of all of this has been removed, and it’s just sonic detritus floating along in suspended animation, doing lovely little pirouettes and blowing peyote smoke rings.

Loveless is not an album that “rocks” in any conventional, beaming-down-to-rescue-humanity sense. The incredible opening track “Only Shallow” starts with a quick drum fill that kicks down the door between our reality and a writhing cauldron of existential fire and belching evil spirits, and the club-friendly closer “Soon” is the post-punk “Disco Inferno.” Other than that, it’s impossible to clap along rhythmically with a large group of people to Loveless, and you definitely don’t want to put it on while washing your car. (The guitars approximate the sound of a Pontiac Grand Am being sawed in half.)

What’s incredible about Loveless is that no matter what level you play it at, it seems louder than it actually is, and yet also not nearly loud enough. A lot of that has to do with how Shields and fellow singer-guitarist Bilinda Butcher deliver their vocals in soft murmurs that undermine the aggression of the music. It is ugly and pretty, sensual and twee, metallic and billowy, all at the same time, with no beginning and no end. Which perhaps is why My Bloody Valentine hasn’t dared follow it up yet: Loveless still keeps ringing in the ears of anyone who’s ever played it.

In June, Rolling Stone unveiled yet another version of its “500 Greatest Albums of All Time” list. To the surprise of no one, the Beatles’ Sgt. Pepper’s Lonely Hearts Club Band (which is not even a top-five Beatles album) was at no. 1. The highest-ranking record from the last 20 years (again, no surprise) was Nevermind, at no. 17. Achtung Baby came in at no. 63, and Kid A (not the more traditionally popular OK Computer) was at no. 67. No other album made since 1990 made the top 100. (Loveless showed up way down at no. 221.)

That says more about the voting bloc at Rolling Stone than it does about music of the last 22 years. It also explains why we tend to carve up music history along generational lines. (People are physically incapable of accurately judging the greatness of music that was released before they turned 13 and after they turned 35.) In May, Spin published its list of the 100 greatest guitarists of all time, pointedly stating in the introduction that “we’re not drawn to Olympic feats of fleet-fingered athletics, unless they’re used for unique and exploratory ends. We see the mewling histrionics of Jeff Beck as tyranny instead of catharsis. The name Derek Trucks is practically alien to us.” The following list didn’t include Hendrix or Clapton, but it did have an entry on Skrillex. That’s because this is our list, not yours, and a non-guitar playing DJ can be a great guitarist because he belongs to us. Remember that the next time you won’t lend us the car, Dad.

On the Spin list, Shields comes in at no. 2, right behind generational avatars Thurston Moore and Lee Ranaldo of Sonic Youth, the most rock-band famous rock band ever to never become actually famous. “My Bloody Valentine’s signature opus Loveless is what happens when Kevin Shields puts his mind to making that instrument sound like anything but,” reads the Shields entry. In spite of having all the hallmarks of a standard-issue rock band, My Bloody Valentine turned those conventions inside out; Shields implicitly rejected rock history just as the guardians of rock history rejected him. And this makes his band seem more important in recent rock history than many far more successful groups. Sometimes when musicians lose, they really win.

Loveless is part of a generation of rock albums that court greatness by shrugging off the notion of greatness as a useful concept: Pavement’s Slanted and Enchanted, Wilco’s Yankee Hotel Foxtrot, Weezer’s Pinkerton, Neutral Milk Hotel’s In the Aeroplane Over the Sea, Guided by Voices’ Bee Thousand, and Animal Collective’s Merriweather Post Pavilion are also in this company. These records are touchstones of a different kind: They’re important in rock culture, and hardly at all in the culture at large. The thorny, heavenward-seeking tendrils of Loveless still spread so far and so wide that they can almost fill the vast expanse between the two.