Courtesy of B Lloyd 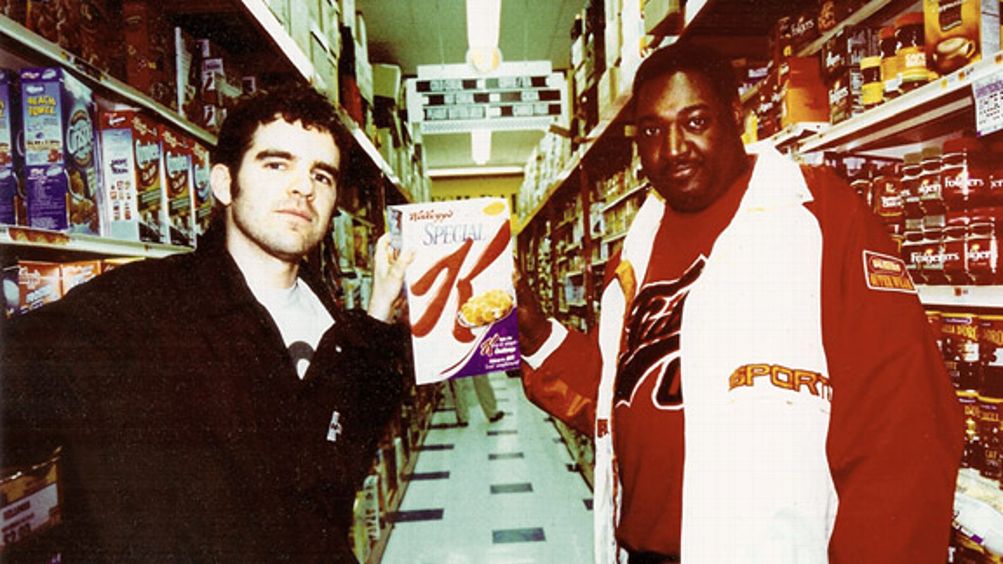 In 1995, the head-trauma wing at a nursing home in Bensonhurst began acquiring the lost memories of Def Jam’s first rapper. Terry Keaton, a new patient at Haym Salomon hospital, had emerged from a coma unaware that he was T La Rock. Or that T La Rock had a hit in 1984 called “It’s Yours.” All of this was news to Keaton, as it was to neurologists. What was known is that the history of T La Rock — and perhaps the time of his life — had been purged from Terry Keaton’s mind with a blunt instrument.

The assailant was never caught, and Keaton spent much of his rehab listening to “It’s Yours,” recollecting lines that the rest of the hip-hop world had been quoting for the past decade. Residents at Haym Salomon — many suffering from dementia and Alzheimer’s — would trundle into Keaton’s room and learn that T La Rock once called himself a reason for a very nice day. (This is not hyperbole: He is really a nice guy.) Though “It’s Yours” wasn’t exactly targeting the Yiddish-speaking Russian-granny demographic, this Def Jam moment essentially became theirs: a new memory that required an additional memory for all that excess bass. Listening to an 808 drum machine certainly beat not recognizing your loved ones.

As happens often with severe head-injury cases, Keaton began recalling details that had been vague prior to the attack. One in particular concerned the Beastie Boys’ presence in the studio when “It’s Yours” was recorded in 1983. Loaded off their first slugs of Brass Monkey — a German-engineered cocktail of beer and orange juice — the Beasties provided background party noise, some chanted assonance that seemed to be mimicking a hungover barnyard. How strange this low-end therapy must’ve been to nonagenarians at Haym Salomon, listening in their robes and slippers to a guy whom they originally mistook as an orderly, as if Keaton was just there for bathroom navigation. What it must’ve sounded like to Terry Keaton himself, hearing T La Rock for the first time, again.

The Brass Monkey story appears in Def Jam Recordings: The First 25 Years of the Last Great Record Label, a combination scrapbook and oral history of the first rap label to become a brand. (T La Rock’s brain injury, and much of what follows, does not appear in the book; these are just supplemental implants, actualities that have kept me awake over the years.) I hauled this carry-on maroon tombstone throughout holiday airports in Europe, just to read accounts of Russell Simmons’ elbow patches and look at photos of the Beastie Boys chasing Madonna across stage with squirt guns. I imagined Public Enemy’s Security of the First World going through security. Sir, your plastic UZI is in direct violation of FAA tonnage restrictions. Or Flavor Flav’s neck clock gliding down the conveyor in its own tub. During the TSA scan, I made Jay-Z hands above my head and pondered essential questions like, why are there no bells in “Rock the Bells”? (Answer: The bells went to Run-DMC’s “Peter Piper,” recently heard in the Chesapeake Energy Arena on Christmas Day, when the Oklahoma City Thunder annihilated the Orlando Magic.)1

I first saw the book while Christmas shopping and Scrooged it for myself — not the first time Def Jam had compromised holiday largesse. December of 1985, I bought a copy of LL’s debut album, Radio, for a friend, but decided it was better off in my collection. Long before Russell Simmons Phat-Farmed America, the purchase of a Def Jam 12-inch was a label-conscious consumer act. In high school, we coveted Def Jam tour jackets and defaced homework with blobby bootlegs of the PE logo, a target in soft focus. Back then, Public Enemy was killing it and nearly took me out in the process. When I first saw them on the ’87 Def Jam tour, I ended up in the emergency room, wired to an EKG. Inflammation of the pericardial sac, said the cardiologist, ruling out “Rebel Without a Pause.” According to MC Serch’s account in Def Jam Recordings: You couldn’t hear that song in a club without someone getting robbed or beat up. Proximity to mayhem is always good for the lore.

Though “It’s Yours” did not induce a coronary, it happily fragged my mom’s speakers when I first played it during a thunderstorm, summer of 1984. (Acting as surge protector, my mom pulled the plug, leaving the Bass and I in darkness.) When Russell Simmons first heard “It’s Yours” on the radio, his mind was blown by T La Rock’s “40-letter words.” He immediately sought out the song’s producer, Rick Rubin, an RA’s nightmare at NYU who had a thing for Captain Lou Albano and had an 808 in his dorm room. A lucrative partnership was born. At the time, Simmons was managing Run-DMC and lesser-known clients such as Spyder-D. (Russell once advised Spyder to not wear a Spider-Man costume on stage. Named for his on-court spin moves, the future owner of the Charlotte Krunk refused.)

Before Rick and Russell, there was Russell and The Guy Who Made “Zoot! Zoot! Zoot! Here Comes Santa in His Space Suit.” In 1982, Simmons’ ear for new sounds had led him to synth innovator Bruce Haack, a “Christmas fanatic” from Nordegg, Canada who claimed his only friends were farm animals. Haack made electronic dance records for children (“Fantastic Skullastic”) and Satan (“Mean Old Devil”). It was an improbable union: Haack, the reticent analogue genius who guested on Mister Rogers’ Neighborhood, and Simmons, the mouth about town who sipped vodka-cranberries with Prince Vince Gallo. (After registering the wall of human skulls in Haack’s home studio in West Chester, Pa., Simmons suggested they record elsewhere.) The result was “Party Machine,” a lo-fi, Kraftwerk jalopy that asked, “Is it hard to think of life without sex?”

It stands to reason that if you’re onstage with a giant, inflatable dong and girls in cages, probably not. The Beasties returned from their License to Ill tour hungover, disillusioned, and triple platinum. (A customized “All Excess” backstage pass appears in the book.) They would ultimately leave Def Jam owing to grievances over money and career direction. But time, success, and Transcendental Meditation heals all wounds, as all parties seem at peace with the internal strife and hurt feelings, at least in retrospect. Without these beefs, there may not have been a Paul’s Boutique, not to mention “99 Problems,” a hatchet-burier of sorts for Rubin and Def Jam.

Adam Horovitz gives the best accounts, as would be expected from a guy who once wrote a song about an ice cream cake from outer space. He reminisces on Russell’s sweater-vest days, comparing the Def Jam offices to Barney Miller — where the Beasties acquired all those Abe Vigoda references. For an informative visit to the original Def Jam offices, LL’s grandmother’s house, and the front seat of DMC’s Cadillac, you should see the 1986 Dutch documentary Big Fun in the Big Town.2

When Method Man first arrived at Def Jam in 1993, he expected to be greeted by Slick Rick and LL. (He ended up on an abandoned bus, with lord knows how many Wu Tang shadow affiliates, for the “Bring the Pain” video, an excellent use of public transportation for a song that, according to Method Man himself, gave his own chest hairs a perm.) The way Russell tells it, they found Slick Rick in a “nuthouse” outside Atlanta after a bad turn with angel dust. (Apparently, Rick barfed upon meeting Simmons.) This was a time when Def Jam seemed to be introducing one new artist annually, each one an event, announced on the back cover of The Source. The book is a reliquary for this sort of memorabilia: business cards, Christmas party flyers, my Swatch Watch NYC Fresh Festival poster, etc. The highlight is a print ad addressing Mike D’s clunky VW medallion. To discourage copycats from ripping emblems off Rabbits, Volkswagen kindly offered to mail one to you themselves. Not exactly a corporate sponsorship from adidas, but a sly endorsement of sorts.

I like the idea of how one great Redman song (“Time 4 Sum Aksion”) can save an entire label, just as a Foxy Brown shopping binge could bring it financial ruin.

To some, the book’s record-deal shoptalk may not be nearly as exciting as tales of LL’s grandma mispronouncing Rick Rubin’s name (“Flip Loogan”). But I like the idea of how one great Redman song (“Time 4 Sum Aksion”) can save an entire label, just as a Foxy Brown shopping binge could bring it financial ruin. At one point, Def Jam CEO Lyor Cohen remembers how he rehearsed his fiscal end-times speech to a backyard tree (and hugged said tree) during the federal investigation of Murder Inc. for money laundering. Far more serious implications than, say, the LL couch-humping controversy of ’87.

Later in Def Jam Recordings, there’s little room for stories, just looks. Jeezy, Ja Rule, Nas, Cam’ron. (No Freeway?) Nine pages of Ludacris. There’s DMX, taking a blood bath. Rick Ross, a man whose face and beard inspired the best pumpkin of 2011. And the Roots, whose bandleader, Questlove, may have brokered one of the more intriguing, if not nerdy, deals in history: He allowed a friend to borrow four terabytes of music, including unreleased D’Angelo tracks, in exchange for a DMX drum machine used for classics by Slick Rick, LL, and Run-DMC. This is not the first time the Def Jam mystique has informed big-time decisions. And before you can rhyme legacy with currency, Watch the Throne becomes available on vinyl for twice as much as Def Jam’s history on paper.

In 2005, the president of Def Jam left a message on T La Rock’s answering machine at a convalescence for head-trauma victims. He referred to a line from “Big Pimpin’,” “Izzo (H.O.V.A.)” the one about “overcharging for what they did to the Cold Crush.” A charitable nod to the old school in a business that runs on short-term memory, where disposability occurs at the expense of the past, back when Russell Simmons had once gone on record (literally, it was Def Jam’s second single) and said, “We don’t have to hire nobody to say nothin’ and keep all the money.”

“I was also overcharging for what they did to T La Rock,” said Shawn Carter to Terry Keaton. Beep. Message saved, memory full.

Shockingly, there is no Def Jam tour jacket in Def Jam Recordings. However, one can be found in Raleigh, N.C., roughly 15 miles west of Terminator X’s ostrich farm. It was last spotted in the kitchen of a friend, draped across a restaurant booth upholstered in Gucci, on the same night Professor Griff was caught dancing through a Soul Train Line at a party nearby that was deejayed by Davy DMX, who once released an album on Def Jam. And so on.3

If you drive by North Carolina State University, where I ducked out of a Local Government exam to make the 3rd Bass/Nikki D show in Wilmington, you’ll pass a telephone pole that once advertised a special Saturday afternoon PE show in Chapel Hill, when rap referred to itself as being conscious.

Down the street is the YMCA, where I last heard “It’s Yours” this past summer. A special a cappella version, issued live from a commode stall in the men’s locker room. Old folks sagged by in paper slippers, in buck-naked recall of the day, oblivious to the voice in the echo chamber. A guy in knee-high tubes and headphones finally emerged, with the chorus and a flush. Thanks for the memories.

Dave Tompkins’ first book, How To Wreck A Nice Beach: The Vocoder From World War II To Hip-Hop, is now out in paperback on StopSmiling/Melville House. Born in North Carolina, he currently lives in Brooklyn.