Label Conscious: The Ghosts of Def Jam’s Past 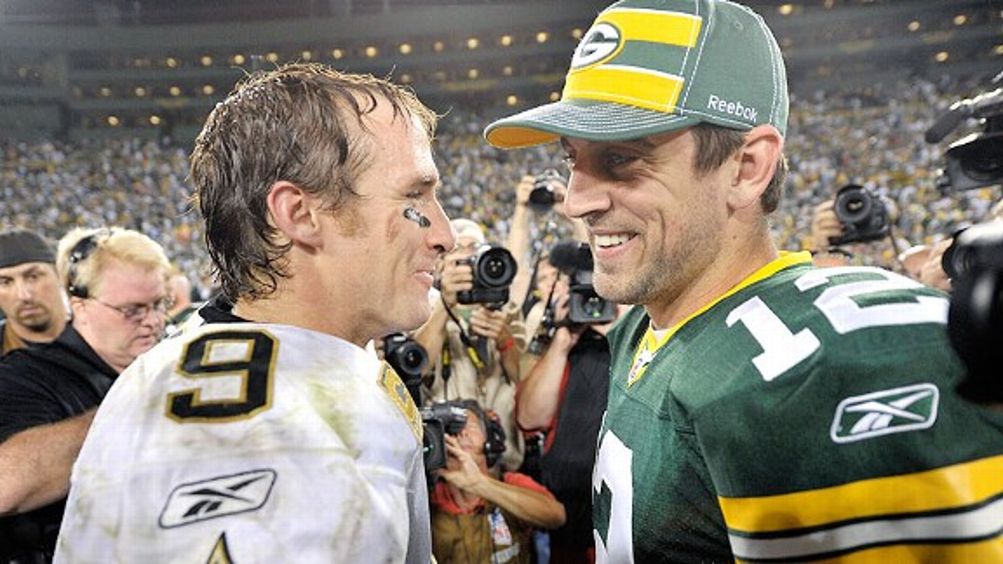 When we last looked at the MVP race around Halloween, it didn’t appear to be much of a race. Aaron Rodgers and a bunch of guys fighting for second place. We noted at the time that the guy who was our pick to occupy second place, Drew Brees, was on a record-breaking pace that he was unlikely to sustain.

Well, oops. Since then, Brees has basically maintained and even slightly improved upon that seemingly unsustainable level of play. He was completing 71.0 percent of his passes, averaging 8.3 yards per attempt, and was projected to throw 41 touchdowns against 18 interceptions. Now, with just two games to go, he’s completed 71.6 percent of his passes, is averaging 8.2 yards per attempt, and is on pace to throw 42 touchdowns against just 13 picks. With Rodgers’ grip on first place slipping after the Packers lost to the Chiefs last Sunday, is Brees really now a viable MVP candidate?

Now, let’s be clear: This debate would not be happening if the Packers had beaten the Chiefs. As great as Brees has been this season, the elite starting quarterback on an undefeated football team is going to win the Most Valuable Player award virtually every time. The move to bring Brees (and to a lesser extent, Tom Brady) back into the MVP discussion after a team’s first loss in Week 15 reeked to us of recency bias; that is to say, focusing on the events that are fresh in the voters’ or viewers’ minds without considering other meaningful data. Green Bay’s loss to Kansas City was an upset in a game the Packers should have won, but you would be hard-pressed to say that it was more embarrassing than New Orleans’ losses to the Buccaneers in Week 6 or the Rams in Week 8. If Rodgers’ loss to the Chiefs had come then and Brees had gone down in ignominy against the Rams this past Sunday, it would have been seen as the final straw that knocked Brees out of the MVP discussion and pushed the award toward Rodgers. Instead, because of the timing of the wins and upset losses, the opposite happened.

That led us to a question worth asking about the broader idea of what wins MVPs: Is that recency bias institutional? Do MVP voters really value production and winning (Brees’ Saints are on a six-game winning streak) during the second half more than the overall package? And if so, should that lead us to the conclusion that either Brees or Brady is about to usurp Rodgers and win the MVP?

To figure that out, we took the yardage, touchdowns, and wins accrued by each of the 18 quarterbacks and seven running backs who have won a share of the MVP voting since 19881 and split out their production by quarters and halves of a season. If there was a recency bias in effect among voters, the players who won the MVP would produce more of their overall total output in the final half or even quarter of a season.2

If a recency bias does exist, it doesn’t show up in the numbers. The 25 MVP winners since 1988 accrued 51.7 percent of their yards as a passer, running back, or receiver and 51.9 percent of their touchdowns during their teams’ first eight games of the year. The average player accrues about 50.2 percent of his yards during the first half, so our MVP winners are actually going even beyond that. In addition, their respective teams’ records are about the same in each half, as they win an average of 6.3 of their first eight games and 6.5 of their final eight. The sample is too small for us to rule out the idea that the recency bias with MVP voters does or doesn’t exist, but there’s no evidence of it existing in the sample we’ve got. This isn’t a regularly occurring problem.

OK, so perhaps there actually is more to Brees being in the discussion than that the Packers loss. We’re going to leave Brady out of this conversation because he’s having a worse season than the one he had a year ago, and it’s extremely hard to vote for a guy as MVP in back-to-back seasons when he’s declined during the second year and isn’t clearly the top guy after the decline. Let’s go with Rodgers vs. Brees, mano a mano, and pick a winner.

Based on the raw statistics, Brees has the edge on Rodgers. He’s on pace to break his own record for completion percentage while coming close to Dan Marino’s record for passing yards in one season. Here are their numbers through the first 14 games:

So Brees’ advantages in completion percentages and yards per game make up for his higher interception rate. Right? Well, no. The numbers above fail to tell the whole story, because they fail to properly account for two things that dramatically affect the statistics of individual players: pace and usage.

In their first 14 games, the Saints have had 154 offensive possessions.3 Green Bay, meanwhile, has had only 145 offensive possessions. Only Pittsburgh (144) has had fewer opportunities to move the ball. The biggest reason why that’s occurred, of course, is that Green Bay’s defense has forced the fewest punts of any team in the league while inheriting, on average, the third-best starting field position in football. If you get the ball against the Packers and you don’t turn it over, you’re going to hold on to it for a long time.

As a result of those nine extra possessions and the nature of how the two teams play, Brees has thrown 110 more passes than Rodgers has this year, which is 23 percent of Rodgers’ total attempts. That can be spun as a positive (Brees has played at a similar level to Rodgers over an additional 23 percent of plays) or a negative (Rodgers has nearly matched Brees’ totals in what amounts to a quarter of a season less than what Brees has done). What we’re more interested in, though, is evening the playing field. The average NFL offense has had 160 possessions to work with this season. What if Brees and Rodgers had each gone onto the field for 160 drives? What would their numbers project to then?

RODGERS & BREES ON THE LEVEL

Brees will still have thrown more passes and completed them more frequently, but Rodgers makes up most of the difference in yards, since he’s averaging a full yard more per attempt than Brees is. If his team played at this pace, Rodgers would be in line to match Tom Brady’s record with 50 passing touchdowns in one season. Rodgers has been slightly more efficient, but Brees has been slightly more productive.

Rodgers can make up the raw yardage difference by virtue of his extra impact as a runner. Without adjusting for the extra possessions, Rodgers has run for 251 yards on 44 carries this year, scoring three times. He’s averaging just less than 5.8 yards a pop. Brees has a respectable 76 yards on 14 carries, but having scored just once, he’s had much less of an impact as a scrambling quarterback than Rodgers has. On the other hand, Rodgers has fumbled four times this season, and Brees has put the ball on the ground only once (with that “fumble” being the ridiculous premature snap to him in Week 15). So that makes up most of the turnover difference between the two.

Here’s how close their offensive production is: The Packers have scored 480 points to the Saints’ 457, but the Green Bay defense and special teams have produced 42 points on return plays, while the Saints defense and special teams have mustered only 18. Take those points out of the equation and their offenses are within one point of one another through 14 games. That’s freakish. Because of the possession difference, the Packers have produced more points per drive, but the Saints have picked up the ball with an average of 71.8 yards to go for a touchdown, while the Packers have needed only an even 70 yards, on average, to go for their score. That’s the difference between fifth (Packers) and 15th (Saints) in average starting field position. That 1.8 yards per drive might not sound like a lot, but over the course of 160 drives, that’s 288 yards.

Strength of schedule is often a last resort for separating players who are so close, but both Brees and Rodgers have had friendly schedules. Using the DVOA statistic as our barometer of quality, the average pass defense facing Brees has ranked 18th in the NFL, while the average pass defense facing Rodgers has been 20th. Brees has played four games against top-seven competition (Detroit, Houston, Jacksonville, and Chicago), while Rodgers has just two such games (Detroit and Chicago, although he has to play each again over the final two contests of the year). They have each played four games against the four worst pass defenses in the league. Brees has suited up twice against 29th-ranked Tampa Bay, as well as Indianapolis and the bottom-ranked Minnesota Vikings, while Rodgers has two games to go against those Vikings, as well as matchups against the Buccaneers and Saints, who are currently 30th.

If late-game heroics are your thing, each player has a case. Rodgers suffers from being in too many blowouts, but his 68-yards-in-58-seconds sprint to set up a game-winning field goal at the end of the Week 13 game against the Giants qualifies as sheer dominance, especially in a situation where the vaunted momentum was entirely on the New York side of the coin. Meanwhile, Brees has two slower drives that stand out from earlier in the year. In Week 3 against the Texans, he took the Saints 93 yards in eight plays with 4:08 left before Mark Ingram scampered in from 12 yards out, giving the team a 40-33 win. Two weeks later, Brees was the architect of a six-minute drive in the fourth quarter that culminated in a Pierre Thomas touchdown catch with 50 seconds to go, turning a 27-23 Panthers lead into a 30-27 Saints win.

In the end, the deciding point in this MVP race may come down to a Brees drive that didn’t work out. Think all the way back to Week 1, when Rodgers and Brees matched up against each other on opening night at Lambeau. The Saints take over with 5:35 left on their own 24-yard line, down 15 points, with just one timeout left. Their chances of winning are estimated to be at about 1 percent. Somehow, Brees brings them back to life. They drive 76 yards in 3:20, scoring on a throw to Jimmy Graham to get within eight. They get the ball back with 1:08 left after the Packers go three-and-out and, somehow, march 70 yards in 55 seconds. On the final pass of the game, A.J. Hawk is called for pass interference in the end zone, giving the Saints first-and-goal from the 1-yard line on an untimed down. On those two series, Brees goes 10-of-15 for 134 yards.

It’s not enough. On the untimed down, Brees hands the ball to Mark Ingram and Clay Matthews stacks him up at the line of scrimmage for no gain, ending the comeback bid. If the Saints score, get the two-point conversion, and go on to win the game, the argument of Brees versus Rodgers is a cinch for Brees. Instead, as close as the race between these two great quarterbacks is, Aaron Rodgers is likely going to be voted as the Associated Press MVP. And it may have come down to a play made by a linebacker during Week 1 in September.

Sportsbook Review: Planet Hollywood
The Fabulous and the Flops of NFL Week 15
A Blueprint to Take Down the Mighty Packers