The Bowl Season Is Upon Us

A Week With the New Jersey Nets 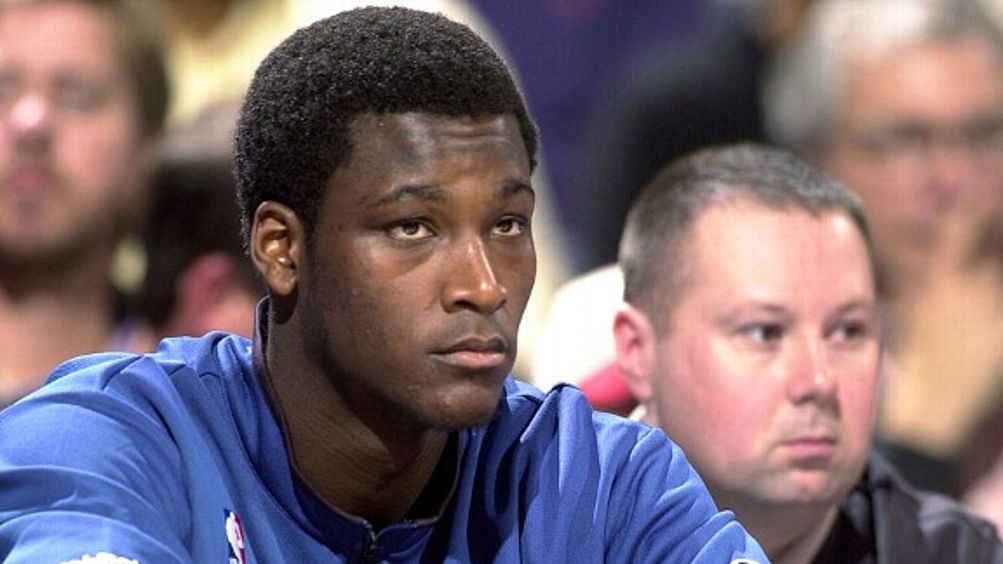 “I was aware, somewhat at least, that I was throwing Kwame into the same old mantras — all my silly, megalomaniacal compassion had guttered out. Face to face and within the context of a basketball gym and other athletes who were fighting for roster spots, my personal Kwame Brown devolved back into a much more generic sort of self-aggrandizement. I think this happened because sports provide us with only a plumb line down into itself — perhaps, more than anything, this self-containment is what explains the power of the mantras, because people who are not invested in creating metaphors just want to see themselves in the context of athletes and the game. Despite all our projections and however many books are written about how certain sports help explain the succeeding world, in the end, what rises to the surface is the actuality of the game and its mind-bending economy.

“I asked if he had any expectations for this season. Kwame said he didn’t think much about expectations. He just wanted to help the team win. I asked if he saw this season as a chance for redemption. He said he didn’t think in terms of redemption because he didn’t see what needed to be redeemed. I asked if he thought being the no. 1 pick in the draft had put an undue burden on him, if he ever thought back and wished he had been taken fourth or fifth. He looked off in the direction of the locker room and grimaced. I asked if he was excited about having a fresh start with the Warriors. He said he didn’t think of it as a fresh start because he had already been fairly successful in the league and played some great games. Finally, I asked if he felt like his critics were being unfair when they labeled him a disappointment. To which Kwame Brown, of course, replied, I just don’t pay attention to what anyone has to say about me. Then, as so often happens in these scripted moments when a writer meets an athlete only to find out that said athlete doesn’t match up at all with said writer’s projections, Kwame Brown got off the chair, extended one of his notoriously small hands, shook mine, and walked away.”

“Ahhhhhh, Round 1 of the playoffs. My annual dream to finish 11-0 against the spread. My beloved Patriots getting a much-needed week off. Four games in 28 hours. What’s better than this? To celebrate, should we bang out an all-football mailbag before diving into the Week 1 playoff picks? I’m on the fence. Let’s take one or two e-mails from readers and see how it goes.”

“Van Halen performed at Café Wha? last night. It’s possible you’ve already heard reports of this, since Café Wha? only holds 250 people and just about every single person inside the venue was a journalist, an industry bozo, or a former Wimbledon champion (John McEnroe was there). This event was partially the result of Café Wha? being previously owned by David Lee Roth’s 92-year-old uncle, but it mostly happened because Van Halen assumed unfathomable intimacy would be an easy way to remind the media that they’re still awesome. The stage was about 15 feet long and eight feet deep; in 1981, it’s possible Roth could have touched the ceiling with his foot, or at least with his samurai sword. It was a little like watching Darryl Dawkins dunk over Kareem Abdul-Jabbar on a Nerf hoop in your grandparents’ basement.

“So, just to be clear: Van Halen is still awesome.”

Parts 1-4 of our team-by-team breakdown of this weekend’s NFL playoff action.

Label Conscious: The Ghosts of Def Jam’s Past

“In 1995, the head-trauma wing at a nursing home in Bensonhurst began acquiring the lost memories of Def Jam’s first rapper. Terry Keaton, a new patient at Haym Salomon hospital, had emerged from a coma unaware that he was T La Rock. Or that T La Rock had a hit in 1984 called ‘It’s Yours.’ All of this was news to Keaton, as it was to neurologists. What was known is that the history of T La Rock — and perhaps the time of his life — had been purged from Terry Keaton’s mind with a blunt instrument.

“The assailant was never caught, and Keaton spent much of his rehab listening to ‘It’s Yours,’ recollecting lines that the rest of the hip-hop world had been quoting for the past decade. Residents at Haym Salomon — many suffering from dementia and Alzheimer’s — would trundle into Keaton’s room and learn that T La Rock once called himself a reason for a very nice day. (This is not hyperbole: He is really a nice guy.) Though ‘It’s Yours’ wasn’t exactly targeting the Yiddish-speaking Russian-granny demographic, this Def Jam moment essentially became theirs: a new memory that required an additional memory for all that excess bass. Listening to an 808 drum machine certainly beat not recognizing your loved ones.

“As happens often with severe head-injury cases, Keaton began recalling details that had been vague prior to the attack. One in particular concerned the Beastie Boys’ presence in the studio when ‘It’s Yours’ was recorded in 1983. Loaded off their first slugs of Brass Monkey — a German-engineered cocktail of beer and orange juice — the Beasties provided background party noise, some chanted assonance that seemed to be mimicking a hungover barnyard. How strange this low-end therapy must’ve been to nonagenarians at Haym Salomon, listening in their robes and slippers to a guy whom they originally mistook as an orderly, as if Keaton was just there for bathroom navigation. What it must’ve sounded like to Terry Keaton himself, hearing T La Rock for the first time, again.”

“If the first three games of the NBA season are any indication, Amar’e Stoudemire is on his way to one of his worst seasons in a very long time. He’s averaging just 17.3 points per game with a PER of 15.48, according to John Hollinger, and his true shooting percentage of just 51.2, down from 56.5 percent last season. Most teams would be pleased with that production from their power forward, but the Knicks rely on Stoudemire and Carmelo Anthony to score most of the team’s points, and right now Stoudemire’s production hasn’t been enough to make the Knicks a real threat to Miami and Chicago in the Eastern Conference.”

“A year ago, Sidney Crosby went down with a concussion and the way we see hockey changed. A few days ago in the World Junior Championships, Canada’s junior team lost to Russia in a way it shouldn’t have lost, and almost won in a way nobody should win. Each speaks to something in our nature.

“Where does it come from, this fight that is in us?

“Surely, it must have to do with the hard land and hard climate of our past, when illness or injury weren’t allowed to keep us from the fields or the forests. That was survival. So when we created our games, we’d play them in the only way we knew how.”

“When Marquette’s Todd Mayo hit a 3-pointer with 13 minutes left at the Verizon Center on Wednesday night, his team took a 17-point lead on no. 9 Georgetown. It had been a dominant 27-minute display from the no. 20 Golden Eagles, all the more impressive because it came on the road. The home team looked, at least for the night, outclassed.

“But Georgetown wasn’t about to panic. The team’s body language was calm and unbowed, always ready for a brief reprieve in which to launch the counterassault. Given a chance, the Hoyas would make a push. Which didn’t mean they were going to win; Marquette was the better team, no question. But they weren’t going to concede, and they definitely wouldn’t play afraid. They had, after all, seen far worse.”

“A quick note: Given the finale last night of the HBO hock-umentary 24/7 Flyers/Rangers: The Road to the NHL Winter Classic, I’m hijacking this week’s NHL goaltender blog post for a mashup of TV recapping, some leftover observations from last weekend in Philadelphia, and a little bit of goalie news. Consider this post HBOalies of the Week. We’ll return to our regularly scheduled programming next week.”

“As someone who watches Top Chef, a number of things have always troubled me about the format. One, almost none of the chefs were in the movie Young Guns. Two, many of them seem to have previous cooking experience, or at the very least to have eaten normal human food through their mouths. Three, not a single person mentoring the chefs ever wears their sunglasses on the back of their heads. Very often, they aren’t wearing any sunglasses at all! These things have always nagged at me, but now Food Network’s Rachael vs. Guy: Celebrity Cook-Off is here to ‘solve’ these problems.”