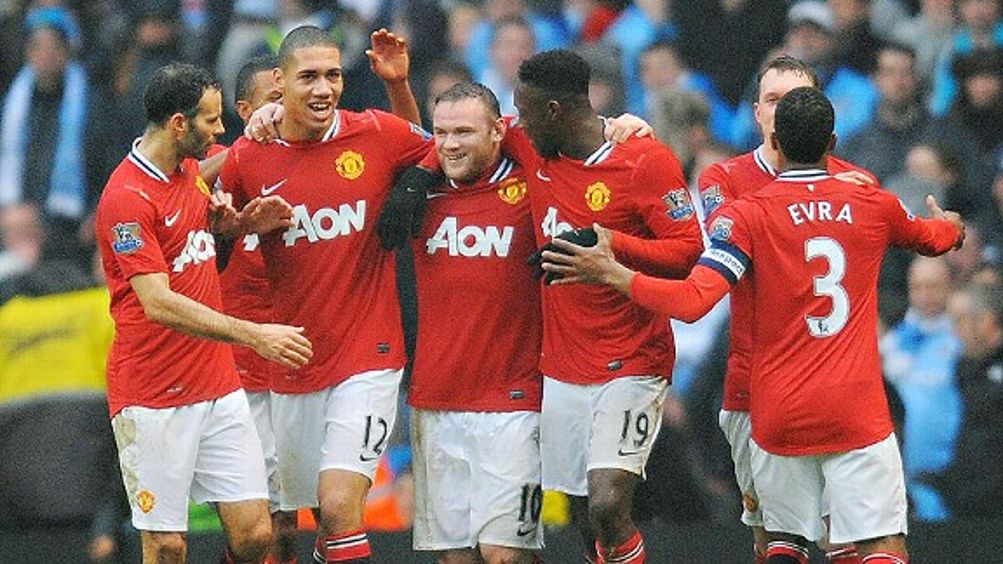 When the whistle blew late on Sunday afternoon at the Barcelona derby, with Espanyol drawing 1-1 with the league/world/universe/galaxy champions, I was emotionally exhausted and wearing a cowl-neck sweater. Not unlike this guy …

What an incredible, exhausting football weekend: Barca vs. Espanyol in Spain, Sporting vs. Porto in Portugal, and Palermo vs. Napoli in Italy. And that was just on the Continent.

In England the leagues took a break for the third round of the FA Cup. Over the years, since Manchester United elected to skip the 1999-2000 tournament so as to focus on the World Club Cup, the FA Cup has been treated by many top-flight teams as a distraction; nice if you win it, but no big deal (and perhaps even advantageous) if you go out early.

Tournaments are only as good as their draws, though, and this weekend served up a match that demanded the commitment of the two clubs involved and the attention of the football-watching world. It was a Manchester derby that mints new fans of the game, reinvigorates old ones, and keeps all of us talking, second-guessing, and arguing for the weeks to come. And the excitement seemed to permeate Cup clashes all over the country.

We needed it. English football needed it. Because no matter how brilliant it was to see Macclesfield Town’s Arnaud Mendy score the goal of a lifetime against Bolton, or Swindon Town manager Paolo Di Canio experience, by his own admission, the greatest day of his own by beating Wigan, there was no escaping the terrible scene that began the weekend. That’s because, as wonderful as some of the action was, the image of the tear-streaked face of Oldham player Tom Adeyemi, trying to pull himself together — with the help of teammates and Liverpool players alike — after being racially abused by someone in the Anfield crowd, made the rest of the football, to put it mildly, bittersweet.

Let’s review the good, the bad, and the ugly from this FA Cup weekend.

The score says Manchester United won, but in every other way, Manchester City was victorious. They may not retain the FA Cup, but this loss might have meant more to them than any of their victories this season, save their 6-1 victory over United back in October.

What’s so great about going out of the Cup, at home, to your most bitter rivals? Because somehow during Sunday’s cold, wet brawl, Manchester City once again became the plucky underdogs; losing, in the fashion that they did, gave them their identity back.

For decades, as they rose and fell through the leagues, City was the kid with a back brace with the locker next to the quarterback/prom king. The transition from runts of the litter to, at least economically, top dogs seemed to happen in the blink of an eye. Imagine if all of a sudden the Kansas City Royals started spending money like the Yankees. It would be difficult for anyone outside of lifelong fans to get behind them. That’s what happened to City: They went from afterthoughts to objects of hate in a matter of months.

Sunday’s match in no way recast City as the Bad News Bears of European football, but it went a long way toward building some internal character.

After 12 minutes, the big-spending boys in blue were down a goal and down to ten men, with their captain Vincent Kompany sent off for a two-footed tackle (which on repeat viewing looked a lot like a slip). As Kompany brooded and stormed off the pitch, no doubt a little miffed that Wayne Rooney went so out of his way to alert referee Chris Foy about the severity of the tackle, he walked by his manager, Roberto Mancini, who was … smirking.

Roberto Mancini hasn’t smiled since he saw Old School in a Milanese multiplex in 2003. But there he was, the ball-breaking Italian who Siberia-izes players that don’t fit into his plans, complains about not having enough bodies when most managers would raze their stadiums for his reserves, and who generally seems to be a hard-ass, smiling.

City were getting pissed on, and I’m not talking about the weather. Big, bad United and their time-manipulating, ref-intimidating boss, Sir Alex Ferguson, were having their way with them. Except this time it would be different. This time they wouldn’t know their place. And Mancini seemed to know that. Despite being short a Balotelli, a Dzeko, a Yaya Toure, and despite David Silva wearing a facial expression that read, “I’d Rather Be In Mallorca,” Mancini knew the caliber of his team and he knew they had some fight in them. After the match he declared that City were the “moral winners.” It’s hard to argue with him.

Here are some quick-hitter thoughts on the match, moral and otherwise:

• Given that we just spent several hundred words talking about the scrappy, can-do spirit of the richest club in the world, it’s only fair to point out just how unlikely this win was for United. It’s easy to look at the Red Devils and only see the shirts, not the names on the back. Ferguson was without his captain and best defender (Nemanja Vidic), played Phil Jones at right back, had midfield made up of a 37-year-old converted winger and a player whose United career looked over earlier in the season. He’s coming off a now seemingly annual relationship breakdown with his team’s star player, quite obviously doesn’t have any money to spend, and has somehow, with spit and guile, stitched together a title-challenging team.

• That being said, you have to wonder about the sustainability of the Ferguson-Rooney partnership, not only off the field, but on. Rooney is a streaky player. He can rack up nine goals in three games and then disappear for half a dozen matches after that. But it can’t help his form to be moved around constantly, from creative midfield, to the wing, to behind the striker, to leading the line. With everything that has happened over the last week, with the latest rumors swirling that Rooney has fallen out with his manager and will look to move on, it’s worth noting that no United player other than Phil Jones has been as flexible, position-wise, as Rooney.

• Also, that dude should be ashamed of himself for demanding that Kompany get carded. I know all’s fair in love and football, but given Rooney’s history with situations like that, you’d think he’d have some sympathy for Kompany.

• Favorite blink-and-you-miss-it moment in the game came when Rio Ferdinand lazily tried to clear a ball, under pressure, to Phil Jones, who was streaking upfield. Rio started tearing strips off the young defender/midfielder, insisting Jones was supposed to come back for the ball, but Jones, who had a tough game against Newcastle but has been outstanding for the most part this season, was having none of it. My lipreading is a little rusty, but it looked like Jones was saying, “You’re Rio Ferdinand, so I can’t tell you to go fuck yourself — but go fuck yourself.”

• The most meaningful touch Samir Nasri took all game was when the ball deflected off his face to Danny Welbeck’s foot for United’s second. Nasri looked brilliant when he arrived at City, racking up assists left and right. But he’s been cutting an increasingly ineffectual figure at the club. He didn’t look much happier on Monday, sitting in the stands at the Emirates watching Arsenal and Leeds and rocking a Monica Bellucci T-shirt. You can’t go home again, I guess.

• Speaking of going home (and touching again on United not having any money), Paul Scholes made a shock return for the Red Devils. “Everyone knows what a fantastic player he is and I thought he showed his quality when he came on,” said Wayne Rooney. I thought for a second that Scholes looked a little nervous when he came on, but then I remembered that Paul Scholes doesn’t have facial expressions. He was partially responsible for City’s second goal, but even a past-it Scholes should help the thin United central midfield.

• The Reducer was written this week lit by the warming glow of Arsenal vs. Leeds on the television, Monday. Really hope nothing cool or interesting happened —

• Oh come on. What do you say about that? I feel the same way about Henry’s return as I do about Scholes’: It papers over the cracks. But Christ, it must feel good for Arsenal fans. This is a different Gunners than the one Henry left for Barcelona years ago. They don’t need him to fill the Emirates or carry the club on his back. They just need him to finish chances. Looks like he can still do that. (Also, probably goal celebration of the season, right?)

• I don’t know which planet is in which house and what it means for Bolton goalkeepers this month, but Adam Bogdan is having a nightmare of a January. Beaten by two wonder strikes in three days, the first being Tim Howard’s end-to-end act of goalie-on-goalie violence, and then Saturday’s miracle volley from Arnaud Mendy.

• Liverpool will be satisfied with their 5-1 dismantling of Oldham. With no chance at the title and no place in Europe this season, domestic cup competitions can be a great source of pride for the storied club. Unfortunately, the cup tie with Oldham left the club with a black eye as well. The man who racially abused Adeyemi was arrested by Merseyside police and Liverpool denounced the act thoroughly after the match. But coming on the heels of the Luis Suarez controversy, it’s not what the club needed. The head of European football’s anti-discrimination body, Fare, accused the club and its manager, Kenny Dalglish, of whipping up a “tribal fervor” among the fan base. And while I think that’s unfair, and while it’s clear that the Suarez and Adeyemi cases are separate events with separate circumstances, Liverpool’s conduct, as a club, on the whole, has left a lot to be desired.

• For any of you who haven’t had a chance to watch the pilot episode of the new HBO series Luck, I can’t recommend it highly enough. The fact that David Milch and Michael Mann managed to make an awesome hour of television with actors like Dustin Hoffman and Dennis Farina is not very surprising. What was surprising was the throwaway shot early on in the episode. A few gamblers are discussing the chances of a particular horse, and we briefly see the Racing Form listing, which reads, “Redknapp Ranch LLC.” Figures. Harry Redknapp is basically a David Milch character anyway.

• I for one cannot wait ’til Mark Hughes quits QPR five months from now because he believes he’s about to be hired, via time machine, to manage the 1990 AC Milan team. Hughes looks like he’s on the verge of replacing Neil Warnock at QPR, but I wouldn’t get too attached. Hughes might very well keep Queens Park up, but he, and his “adviser” Kia Joorabchian (who also “advises” Carlos Tevez), will soon be looking for a more high-profile gig.

Mendy’s was a miracle, Wellbeck’s was pretty decent, and Henry’s was like watching the home run scene from The Natural. But Ben Arfa’s was my favorite.

“It is the best moment of my life.” That might be the only time in human history that someone says that about beating Wigan.