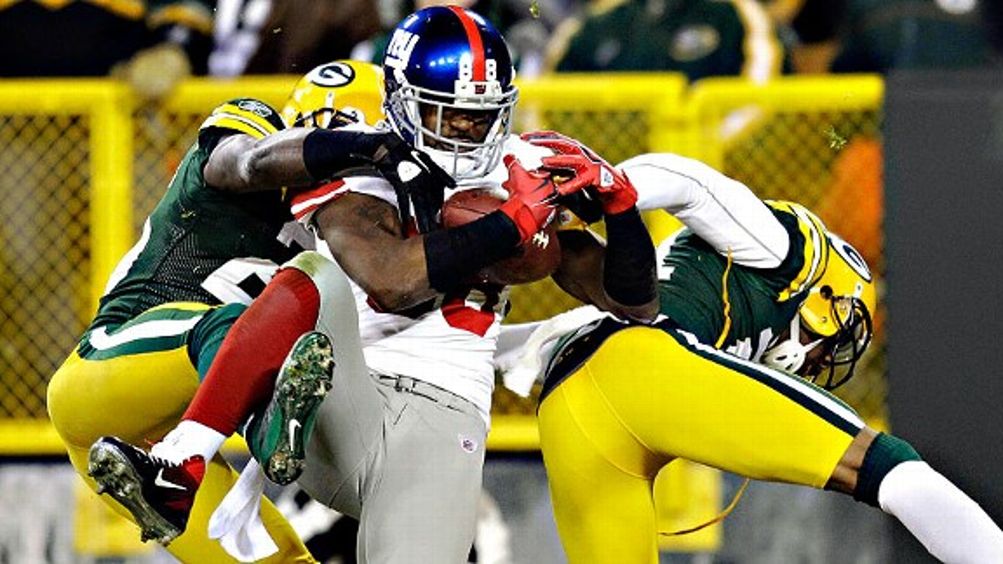 The comparisons are all wrong. The 2011 New York Giants, the team that blew out the Cowboys and Falcons in consecutive home games before manhandling the 15-1 Packers in Lambeau Field on Sunday? That team isn’t like the 2007 Giants at all. There’s a really obvious comparison for what they’ve done through these past few weeks, though, and it strikes closer to the heart of yesterday’s matchup than you might realize. The 2011 Giants, right now, look more like the 2010 Green Bay Packers than any other team of recent vintage.

Let’s have our little Chazz Palminteri figures out the identity of Keyser Soze moment here together. In our preview of Giants-Packers, we covered why the narratives between the 2007 team and the 2011 version didn’t match up, and the Packers game just furthered it. That 2007 Giants team spent virtually the entire postseason in sight of a possible failure; after the wild-card round, they never once had a double-digit lead. They were competitive with some great teams, but they were rarely dominant. This Giants team just beat a 15-1 team on the road by 17 points, putting together what was surely the best single-game performance by any team (considering the context and difficulty level of the opposition) this season.

The 2007-to-2011 similarity has been built upon the incredible coincidence of a late-season 38-35 loss to an undefeated team, but let’s try a different jumping-off point for the Giants season that makes a lot more sense: Dominating your closest rival for a playoff spot. The Giants did it in Week 17, of course, by laying waste to the Cowboys at home in a 31-14 shellacking. The 2010 Packers made their statement in Week 16 with a 45-17 waxing of, yes, the Giants. That win moved Green Bay into control of their playoff destiny and started the Packer’s 19-game winning streak. The Packers had to overcome the Bears during the final week of the season, but then the wild-card round saw them each play at an extremely high level. The Giants beat the Falcons by 22 and held Atlanta’s offense scoreless, while in the 2010 playoffs, the Packers beat the high-flying Eagles by five in a game where the margin of victory failed to capture the chasm in performance between the two teams.

The Giants really meet up with last year’s Packers, though, in the divisional round. In each case, the team in question went and dominated the no. 1 seed in what had appeared to be an unassailable home fortress, tipping the tide in their favor right before halftime with a game-changing swing. Last year’s Packers beat a 14-2 Falcons team at home by 27 points, back when Matt Ryan was 20-2 inside the Georgia Dome. It all happened at the end of the first half. With 2:30 left, the Falcons were tied with the Packers at 14 while facing a third-and-21 from the Green Bay 26-yard line. Somehow, the otherwise-conservative Ryan threw a pick to Tramon Williams. The Packers promptly marched down the field and scored a touchdown with 48 seconds left, but they weren’t done. The Falcons launched a drive downfield that was aided by two defensive pass interference penalties, but with ten seconds left, Ryan threw a second pick in three minutes to Williams, who scored with all zeroes remaining on the clock. Atlanta could have been in a situation where they led 17-14 heading into halftime; instead, they trailed 28-14 and spent the rest of the game trying to catch up.

The Giants were able to pull an extremely similar sort of swing. As Rodgers was driving his team in the no huddle with 3:48 left, it would not have been unreasonable for a concerned Giants fan to wonder if the Packers might score to end the first half and begin the second one, turning a tied game into a 24-10 Packers rout. Instead, the Giants forced and recovered a fumble from John Kuhn, eventually kicking a field goal to go up 13-10. That still left time for Rodgers to drive, but the Giants forced a punt after five plays and then somehow marched 69 yards up the field in 41 seconds, culminating in a Hakeem Nicks touchdown from a Hail Mary — with all zeroes on the clock — that gave the Giants a 20-10 lead heading into halftime. They did to the Packers just about what the Packers had done to the Falcons the previous year. Green Bay, like Atlanta last year, spent the rest of the way trying to get back into the game.

Thank You For Not Tackling

We hope that you enjoyed the ending to that Saints-49ers game as much as we did. In fact, we felt so grateful for getting to enjoy four minutes of sheer insanity on a football field — a stretch where Alex Smith somehow ran a 33-yard sweep around left end for a touchdown and it wasn’t even the most unlikely Niners touchdown of the quarter — that we wanted to put together a little thank you note to the players that helped make those big plays and insane probability swings possible.

So thank you, safeties of the Niners and Saints! It was your total aversion to making tackles or taking remotely coherent angles to ball carriers that helped make the end of that game so freaking fun.

Let’s start with the Niners, who got a masterclass in how not to hit from Donte Whitner. After a huge helmet-to-helmet hit from Whitner on the opening drive concussed Pierre Thomas and forced the Saints back to fumble the ball away inside the 49ers’ five-yard line, every long-suffering Bills fan in America got a taunting text from one of their friends, asking how Buffalo let such a devastating hitter get away. The long-suffering1 Bills fan then probably chuckled to themselves and responded back with, “Just wait.” Whitner spent the rest of the first half yapping, but there was too much game to go for him to avoid screwing something up.

Sure enough, Whitner played a disastrous role in each of New Orleans’s final two touchdowns. First, the 44-yard touchdown to Darren Sproles saw Drew Brees avoid a big blitz from the Niners by checking down to Sproles, his “hot” receiver. After one missed tackle, Sproles ends up one-on-one in the center of the field with Whitner in front of him. It’s a tough play, but Whitner could try to create an angle that would push Sproles onto a side of the field where there are more 49ers to help out. At the very least, Whitner should try and make a tackle attempt. Instead, Whitner runs towards Sproles and then freezes, at which point Sproles just runs right by him. By the time Whitner has turned his hips to try and adjust to Sproles’s slight move, the running back is already by him. Sproles ends up walking into the end zone without Whitner even touching him, let alone stopping him.

Then, on Jimmy Graham’s 66-yard touchdown catch, Whitner basically does his best job of pushing the Saints into the NFC Championship Game. The 49ers line up with Whitner as a deep safety and Patrick Willis in underneath coverage against Jimmy Graham, who runs a seam pattern past him. Whitner’s responsibility here is to close on Graham once the ball is thrown, in the hopes of breaking the pass up or, at the very least, minimizing the impact Graham has after the catch. Time for that fateful word again. Instead of doing that, Whitner decides to go for either the interception or the huge, brain-jarring hit, playing the ball instead of worrying about allowing a touchdown. Sure enough, if you watch the replay that we linked above, Whitner comes flying through the screen like a comet … and speeds right past Graham. The touchdown is basically academic.

Fortunately for Whitner, though, he got to play against Saints safety Roman Harper. Yes, the same Roman Harper that allowed three touchdowns to the Seahawks in the wild-card game last year. Harper had a mostly-miserable game, but we’ll just focus on the two big plays to Vernon Davis on the final drive as a summation of what Harper had to offer on Saturday.

First, the 47-yard pass to Vernon Davis with 40 seconds to go. Davis lines up standing upright just outside of his standard spot as a tight end, and the Saints send free safety Malcolm Jenkins to go cover him at the line of scrimmage. Jenkins is a former cornerback, but Davis is going to be a tough matchup for him up at the line. Sure enough, Davis gets a free release and runs past Jenkins immediately, giving him a clear path downfield. Harper’s deep as the lone safety in centerfield, and while he has no hope of getting to Davis to stop the completion, he can limit the bleeding by making a tackle on Davis. With Jenkins chasing him and the clock running out, the obvious play is to force Davis to the sideline. As the last line of defense, though, it’s Harper’s job to make sure that Davis doesn’t get by him; if he can just slow Davis down, Jenkins should be able to catch up and help out with tackling the far bigger tight end. So what does Harper do? Well, he stands still and decides to try and grab Davis by the ankles as he runs by the safety. Great idea! Davis skipped right past Harper for 22 additional yards.

Of course, Harper was also in coverage on “Vernon post”, the passing play that produced the game-winning touchdown for the Niners. The play is designed to occupy the linebackers long enough for Davis to cut in ahead of the safety, where Smith will hit him with a well-timed pass before the safety can get in to make the play. If Harper recognizes what’s coming and sniffs it out early, he intercepts Smith’s pass and wins the game. Instead, he was a fraction too late, and the collision of Harper and Davis left Harper lying in a heap on the floor. He was basically just posterized by a tight end in the end zone during the biggest game of the season. It’s not quite as egregious as Harper’s first mistake, but it sure looked a lot more painful.