Why Syracuse Will Win the National Championship

Behind the Pipes: Into the Arms of the NHL 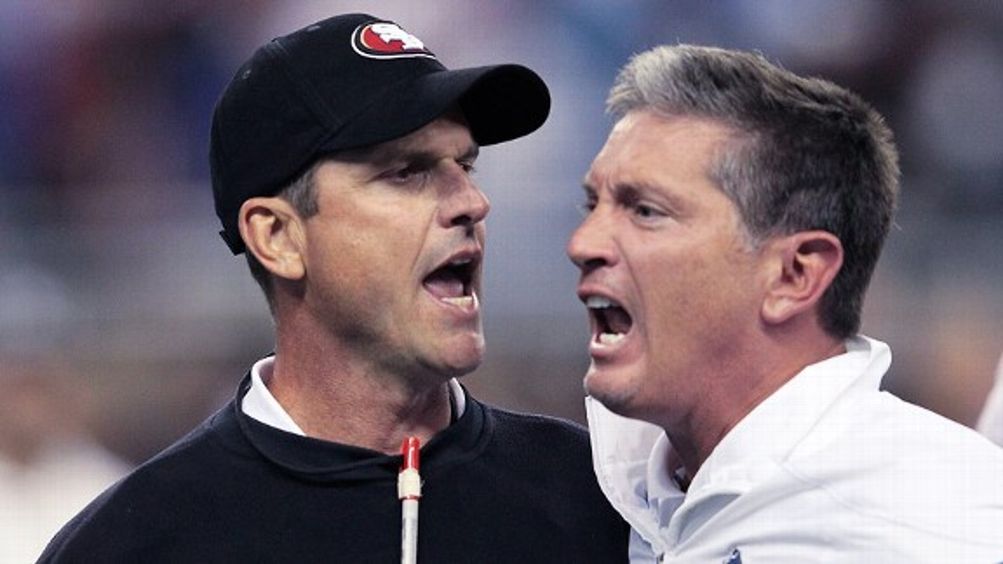 Two middle-aged men meet at midfield after the final whistle; a quick word is exchanged, a perfunctory handshake is handled with too much vigor, and one of them backslaps the other with a chummier velocity than the moment called for. Suddenly, one of them is dashing 30 yards after the other one, and their younger, more physically imposing charges are reattaching their helmets, ready to resume battle. You might rewatch the video clip of Detroit Lions coach Jim Schwartz’s near dust-up with his San Francisco 49ers counterpart, Jim Harbaugh, over and over and still not have a clue why any of this happened. And that’s part of the point.

Both coaches are notorious hotheads, they say. It all stemmed from Harbaugh’s first-quarter challenge of a Lions touchdown, others offer. Maybe it goes back to the year they spent together in 1998, when Harbaugh played for the Baltimore Ravens and Schwartz was a defensive assistant. I was so “revved up” after beating his heretofore-undefeated team, I must have crushed his puny hand with mine, Harbaugh implied. For his part, Schwartz — no shrinking violet himself — suggested that Harbaugh uttered a profanity that violated “the protocol that goes with this league.”

Of course, none of this truly matters, particularly when the actual story might have been the 49ers’ various, deeply unexpected accomplishments: their recovery from opening jitters that suggested they were the shook ones; the offensive line’s strong, aggressive play against Ndamukong Suh and a talented Detroit defense; their containment (relatively speaking) of Megatron and a promising performance from Michael Crabtree; the fact that the Niners won on the road with another one of quarterback Alex Smith’s gutsy but classically “Alex Smith” stat lines. But these are stories that can be apprehended, narrated in retrospect, slowed down for frame-by-frame analysis, and then recharted: Suh and his cohort were unused to such a brazen strategy; the Niners’ double-team of Calvin Johnson neutralized him in the red zone; Smith’s heart this season has been as large as his hands are small.

What made the Harbaugh-Schwartz conflagration so delightful was the fact that it could not be explained — the way it called attention to how two men playing chess might, fundamentally and apropos of nothing, want to gouge each other’s eyes out. You can watch it over and over, hire a lip reader, grasp for narrative, and all that matters is that you are still watching it over and over. Everyone wins. It is the kind of nonmoment that the lords of televised sports fantasize about, the controversy that inflames the passions just enough to demand a reperusal of the footage — on DVR, NFL and NBC-affiliated websites, newspapers, and magazines. Harbaugh further establishes his reputation as a coach who can will his teams to victory — a theme echoed by his players, who have no problem pointing out when opposing teams seem to give up. Schwartz absorbs any storylines around his strong-but-still-work-in-progress Lions, sending forth a message that they will not be happy merely to overachieve — they are serious.

Watching sports is a way of questioning how we might act in certain situations: Who can fault one man’s fist-pump and another’s desire to fight on after the final whistle? More important: Who among us would actually want to shake hands after a game? In the end, it’s not Harbaugh’s fault for greeting Schwartz with an impish, overfamiliar glee, as though the two of them together had just outwitted communism, just as it’s not Schwartz’s fault for catching hurt feelings.

If the NFL actually reviews this noncontroversy, as Greg Aiello promised they would, then they might want to begin with asking why coaches have to shake hands in the first place. We’ve been here before. There was Todd Haley’s accusatory finger jabbed in the direction of Josh McDaniels, as the Broncos coach stood there open-palmed. Each time Bill Belichick greets a former protégé — and there are so many! — it’s a micro-event of no-look gas-facing and awkward, floppy sprints that violate the spirit of aerodynamics.

Most head coaches find the tradition irritating or, if you were to carefully ask some of the more outspoken, old-school types, evidence of how lax and PC things are these days. “[I]t is fashionable and we are a much more loving country,” was Jerry Glanville’s explanation, when interviewed for a 2007 Boston Globe article about this newfound tradition. It’s hard to disagree. It’s an inorganic encounter engineered for televised sports, the closure-signifying equivalent of the frozen montage at the end of a sitcom. “I wish I could pinpoint the one seminal moment that made us, as viewers, [insist] they do it and we see it,” CBS Sports’ Jim Nantz admitted in the same article. “But we in the media, all of us, have applied the pressure on the principals to [shake hands] and the directors have fallen in love with the shot. We cover and try to interpret what we see.”

There are nice postgame traditions: the line-up after an NHL match, when these scruffy, gliding beasts revert to their polite, inner choirboys. Or after soccer matches, when the affiliations that precede or complicate the badge on one’s chest — nation, club, or native tongue, or maybe just the kinship of transnationally dislocated yacht-owners — take precedent and players swap shirts. Or NFL prayer circles, if that’s your thing. But sportsmanship is most bracing when it is wholly unexpected. The postgame handshake is a stilted tradition that seems designed to prolong drama — to provide a new platform for it — rather than bring closure. It’s fake warmth and mandated sportsmanship, legislated by a league that has drained the sport of a good deal of its fun (but not its danger).

Previously from Hua Hsu:
Waiting for Radiohead
Varieties of Disturbance
When They Were Kings: Paid in Full to Tha Carter IV
Never Been in a Riot
Watch the Throne: Let Them Eat Cake