Will Canelo vs. Chavez Become the New Mayweather vs. Pacquiao? 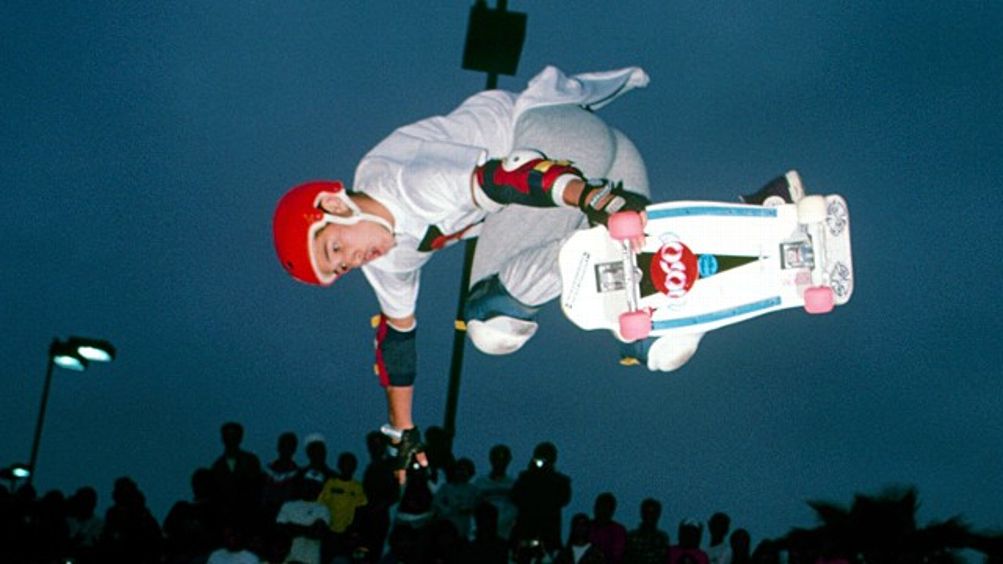 All great sporting rivalries are really conversations about style, philosophy, what it means to live the good life. Among skateboarders in the 1980s, there were but two choices. For those who appreciated craft and technique, there was Tony Hawk — diligent, inventive, a gangly mess of limbs and kneepads capable of retracting into a perfect, spinning sphere. Hawk was the one who sought a virtuosic, straight-A’s kind of perfection, an uptight kid who seemed too busy collecting trophies and devising new tricks to truly dream. Christian Hosoi was the natural, the very definition of style, the one who seemed to be carving full sentences into the cement with his perfect runs. He was the one with the swagger to pull off women’s jeans, hair extensions, and the blasphemous nickname “Christ.” Tricks are for kids. Hosoi was trying to see the sun.1

Everyone knows what happened to Hawk. He is the most famous skateboarder of all time. His almost masochistic sense of discipline has guaranteed him continued success as a skater, board and apparel manufacturer, occasional actor, and video game pioneer. For nearly a decade, Hosoi was held up as an example of what happens when you fly too high. He experienced an unprecedented kind of fame and lavished in the wonderful parties and brain-rewiring drugs that are its spoils. Disappearing in the mid-1990s and then catching a 10-year bid in 2000 for drug trafficking, Hosoi became one of skateboarding’s great tragedies, the rival who had failed himself as well as the sport.

Hosoi’s new autobiography, Hosoi: My Life As a Skater Junkie Inmate Pastor (HarperOne), is an attempt to account for this precipitous drop. There’s a passage early on that is almost too perfect in aligning his views on life with his approach to skating. “When you’re blasting air, it’s not the going up that’s the rush, but the coming down. Everything slows down up there. It takes forever because you’re thinking of what you’ve got to do, calculating your projectile, your landing, everything. All of a sudden you start picking up speed, coming down fast. Once you hit, it’s like you’ve been floating and you realize you can do whatever you want. I always loved doing whatever I wanted.”

The ominousness is intentional. Hosoi begins his account of childhood by warning readers against judging his father, a Japanese Hawaiian artist named Ivan Hosoi, too harshly. There is a bond that surpasses any standard forms of intimacy here; they are more like drug buddies than father and son. The elder Hosoi’s devotion to his son’s dreams is Olympian. He quits his job and begins working at the Marina Del Rey Skatepark, just so his son can practice anytime he wants. Christian is a daring skater and a fast learner, the little brother to Tony Alva, Jay Adams, Shogo Kubo, and Stacey Peralta, the clique immortalized in Peralta’s Dogtown and Z-Boys and Lords of Dogtown. While skateboarding competitions in the late 1970s had depended heavily on carnival tricks and feats of flatland dexterity, this new wave skated with a stylish aggression. They were, as one observer remarked, “like a hockey team showing up for a figure skating competition.”

Raised without limits, Hosoi perceived none in his art. He turned pro in 1981 at the age of 14.2 By the mid-1980s, Hosoi is one of the most successful skaters in the world. What sets him apart is his style. His competition runs are like the convergence of unalike energies: wild, reckless, and urgent yet impossibly graceful, perfectly communing with every bowl and half-pipe until vaulting higher into the air than anyone else. He endorses sneakers, T-shirts, and wristwatches at a time when only established names get to do this; at the very least, few 17-year-olds are allowed to dictate the terms of their image rights. He partners with the manufacturers of every component of a skateboard.

When he is not skating, he is devising ways to become an even more eccentric showman — to distance himself further from the robotically gifted Hawk.3 He gets hair extensions and shows up to competitions with the bulky, funky mane of an Asian grandma.4 He wears shirts atop shirts, shreds the sleeves and midriffs of his shirts and wears them as headbands, stuffs extra shirts in the back of his pants so he looks like a comet as he hurtles through the air. He moves into a house in Echo Park once owned by W.C. Fields and converts one of the main bedrooms into a closet full of clothing — “women’s coral pink, light yellow, and powder blue items, super tight girls’ pants and spandex shorts … I’m wearing skinny jeans decades before it’s a fad with skaters.”

It is here that Hosoi becomes a classically ’80s Hollywood story of sunglasses-and-Advil excess. There are parties where everyone cranes his neck to see if Chynna Phillips and Pauly Shore are around, an Andrew Dice Clay cassette, white leather jackets. Hosoi and a buddy hustle Scott Baio at pool. He hires Schoolly D and Eek-A-Mouse to play his 21st birthday. But as the 1990s approached, the culture around skating began to change. There is a shadow history of America to be written about the relationship between economic downturns, boredom, and creativity. California’s postwar prosperity meant that everyone could have a backyard pool. A drought in the 1970s emptied all these pools out, creating perfect bowls for skating and turning the dying sport into something fast and vertical. The economic downturn in the early 1990s destroyed this style of competition, which required more overhead than just taking to the streets.5

Hawk vs. Hosoi became a hopeless proposition, like an aging Baby Boomer trying to explain the pleasures of jazz. At his nadir, Hawk’s businesses had gone and he resorted to doing demonstrations of skate tricks at amusement parks for a fraction of what he once made. Always the romantic, Hosoi turned to drugs. He hit a new low in 1995, when he skipped the inaugural X Games — with its promise of Hawk vs. Hosoi 2.0 — and hid out in Japan with a wealthy benefactor who loved skateboarding and methamphetamines. As Hawk reestablished his brand and an audience cohered around “action sports,” Hosoi — the prototype X-Gamer if there ever was one — was lost to the world. Four years later, Hawk drew nonpartisans to the X Games when he landed the first-ever “900,” a seemingly impossible aerial spin that had been part of skate lore for over a decade.6 Hosoi had long since disappeared from the public eye. A year later, he would be facing a 10-year bid for trafficking meth.

The 18th installment of the X Games opens in Los Angeles this week. It’s hard to recall how tenuous this idea seemed when the “Extreme Games” debuted in 1995. But today, the skateboard has resurfaced as a ubiquitous prop of urban life, especially among young rappers. Pharrell Williams and Lil Wayne might be two of the most famous people-on-skateboards around. Skaters have been responsible for some of the most watchable and entertaining of mid-2000s MTV reality programming. And the resurgence of Vans, Nike’s entry into skate culture a decade ago, and the astonishing consistency of Supreme have converged in this moment when fashion and streetwear are one and the same.

It’s no exaggeration to trace much of this back to the dark prince Hosoi — he didn’t so much commercialize skating as bend the market around his own warped sense of style. As with those whose talents defy reason, however, he’s not at his best when trying to explain his arc. When you read about someone’s past excesses, you want a sense of how it was then, some admission that it was, indeed, rad in a comprehensive and all-consuming way. But rehabilitation and recovery require that you don’t cast too fond an eye on past transgressions, so in the case of Hosoi, one rarely experiences the thrill of his youth without a sense of apprehension. “Just in case you were wondering, I do drugs with some really famous people who cannot be mentioned in this book,” Hosoi writes, as though to stop the book from becoming as tawdry and boastful as most readers want it to be. “Have to respect their privacy.”

We read these kinds of books in order to find out if great artists understand their gifts, if we can glean some kind of insight into the dreams, visions, fears that possessed them. How, for example, Hosoi came up with one of his most famous moves, the lost-in-space, airborne crucifixion known as the Christ Air. Skaters had been getting air for some time, but going up always seemed a prelude to coming down — a toe would stay glued to the board, or the board would be gripped in position for landing. But the Christ Air was the equivalent of a pilot taking off his parachute on the way down. At the apex of his journey, Hosoi would extend his arms, straighten his legs, and hold his board aloft.

Like a man floating through space — or, perhaps, on his way to heaven. Of course there were all these holy signifiers around Hosoi, he now explains, just waiting to be accepted — the nickname “Christ,” for example. When Hosoi arrives at his spiritual awakening in Hosoi, it lacks the brain-stretching wonder of a true epiphany. Instead, a book that has been episodic and restrained suddenly snaps into shape. Nabbed by the cops with 1.5 pounds of meth, he finds himself in jail and, at the behest of his girlfriend, decides to read the Bible. He is awakened. He realizes that “Jesus Christ is more than a rad-sounding name.”

All of this makes for a clumsy book but a fascinating life. Hosoi still skates today, as part of his work as an outreach minister in Southern California. He returned to the X Games as a participant in the “Legends” bracket and won medals in 2009 and 2010. He still speaks with a chill, half-baked drawl, even when reciting scripture. There’s something alluring in Hosoi’s conviction that this was all God’s will, even if you have little use for religion or skateboarding, even if you recognize that this is precisely how all born-again conversions get streamlined and back-narrated and turned into genre. And yet, in the case of Hosoi and the generation that grew up studying grainy, Nth-generation VHS footage of his transcendent feats, this surrender to faith feels somewhat natural. It’s a belief that some things aren’t merely the result of practice and hard work. It’s faith in the sublime, those impossible things that make us wonder about the nature of beauty and grace, the shape and design of our bodies, the distance to the sun.