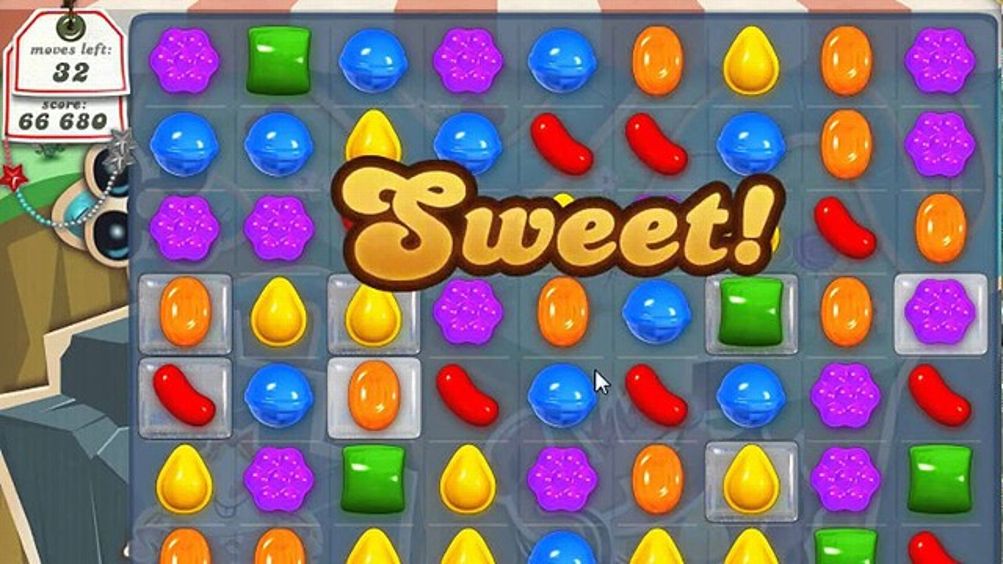 For the past two weeks, I have been stuck on level 311 of Candy Crush Saga. It gives me great anxiety not knowing if I will ever experience the joy of seeing a new level again. After 310 stages and a handful of impulsive $1 purchases for more lives, I am confident that I have the necessary skills to overcome the near impossible task of clearing 42 blocks of jelly. Fifty moves just aren’t enough to break the blocks and clear the final cells of jelly since the layout of the level is constrained in a shape that discourages the creation of striped and packaged special candy pieces. But after two weeks of the same level, I begin to wonder if my journey to the end of Candy Crush is even worth it. Is it time to walk away from my casual pseudo-addiction?

Like most devoted Candy Crushers, I have begun to blame external forces to rationalize my fruitless hyper-engagement. Perhaps the designers of this game have deliberately created this layout to have a low success rate. Maybe the gaming gods are working against me, providing me with the worst possible start to prevent me from winning. Should I deposit more money to make the game easier? Maybe I am trapped in some sort of growth hacking experiment in which I should beg my friends on Facebook for more lives. The reality is that I am just another active player in British game-maker King.com’s impressive Candy Crush user base of 7.6 million daily players and nearly 160,000 daily installs.

These are numbers that the latest niche social network or “buzzworthy” new app would kill to have.

King.com has become the most relevant company in the casual-gaming sector, essentially stealing most of former powerhouse Zynga’s market share and profits. You might remember Zynga as the creator of Farmville and the company that purchased the popular app Draw Something for $180 million, only to shut down the entire division that developed it 17 months later. King.com’s Candy Crush is the no. 1 Facebook app and the no. 1–grossing game in the iOS App store. It makes an estimated $850,000 per day. As a freemium product, you don’t exactly have to pay to play. There are opportunities to spend money within the game, but they aren’t required to play it in its purest form. If you don’t already know the rules, it is simply a standard match-three game — you swipe pieces of candy around your screen to eliminate them. It sounds easy enough, but King.com gaming guru Tommy Palm credits the ability to create “special” pieces as one of the major differentiating gameplay features from previous historically successful matching games like Bejeweled, Dr. Mario, and even Snood.

Besides creating a madly successful business model, King.com’s Candy Crush Saga has become an interesting social phenomenon because it has deconstructed any sort of “engagement” metric — typically based on defining users, readers, viewers, or players as “addicts” — that most forms of media attempt to utilize. The best-case scenario would be having the entire world immersed in their product 24 hours per day. Users, readers, or players make a daily visit to the game, actively engage for a significant period of time, and if they leave, they are likely to return. The product has become an irreplaceable need, an unquenchable high. Bounce rates, regency, views per user, and time spent within a page or app are analytical ways to measure your media’s value, but they’re usually just manipulated statistics meant to frame a product as more important than it actually is.

Candy Crush Saga doesn’t attempt to create a culture of addiction, where a person becomes unhealthily immersed within the world of the product. It has found the proper place for a casual game in a person’s life, creating an elastic level of engagement. Instead of setting aside free time to run a fake farm with fake animals and fake crops, Candy Crush is something that can be played passively, or with only a limited amount of time available to play. The elasticity of Candy Crush as a casual experience appropriates the game into a realm of “habitual” behavior. You can choose to play the game for one minute, or 15 minutes, or two hours (if you are willing to pay to reload your lives). Play it when you are waiting for your food, sitting on the toilet, ignoring your friends or coworkers, or watching television.

The casual-gaming sector is a crazy space, where simple ideas can make you a fortune. Forget about the bros wearing headsets, critiquing a game’s graphics and spending more than $300 on game consoles. In the casual gaming sector, moms, young children, tweens, and non-gamers are playing these approachable games with low barriers to entry. Those same people who use cheap Android phones as their primary mobile device and still make up that significant PC market share spend their free time playing mobile and Facebook games. Basically, that person from high school who friended you and won’t stop sending you game requests is the face of casual gaming.

Candy Crush has actually existed since 2011, when it was first hosted on the King.com website. Eventually, it launched a Facebook app version to maximize social opportunities, like the ability to give friends lives and extra moves. The socialization of Candy Crush creates the appropriate level of “community,” where you still play as an individual but are indirectly trying to beat your Facebook friends’ scores on every level. In 2012, the game launched a mobile version, turning it into a global phenomenon. However, Candy Crush is entering the “middle ages” of being a successful app or casual game. This means it has reached a point where it will be difficult to sustain its rate of growth. But when you are a gaming company that is considering an IPO, you have to create a “next move” that guarantees even more growth for potential investors.

Candy Crush Saga might not need another move, though, because it doesn’t have an end. Every week or so, more levels are added to the game. Apps don’t lend themselves to sequels because a game can’t fundamentally change gameplay and please its users. Casual gamers don’t actually want change, they just want to keep playing relatively beatable levels of the same game forever. They find security in the familiar icons on their mobile device.

King.com’s most valuable asset isn’t even a massively popular game, but instead the mastery of the social freemium business model. The Candy Crush model prevents players from becoming traditional addicts, because product addiction actually pushes consumers to a point of exhaustion and disenfranchisement. After you lose five lives, you must wait 30 minutes in order to get another life, or request lives from all of your Facebook friends. This forces you to spend time away from the game. Candy Crush Saga has harnessed the amount of time you are required to spend away from the game to create a natural demand. In those minutes and hours that you must wait to regain new lives, a subconscious demand accrues within your casual-gaming soul. You can’t wait for those five lives to return and give you another opportunity to advance further in the game.

Most apps and games built for smartphones, tablets, and Facebook were born to die. They are primarily popular because they’re inextricable from a popular iteration of technology that will eventually fade. The goal of monetization can also compromise the growth and quantity of active users. Previous apps and games were also grounded in fake rewards like badges on Foursquare or fake currency in virtual worlds. Over time, these rewards don’t actually add up to anything other than status in a formerly “hot” app. Candy Crush Saga‘s gaming model is designed to remain in the lives of its user base as long as smartphones, tablets, and Facebook are common consumer devices. It must create more real-world brand value to further establish itself as more than just a game that won’t be reinstalled next time you upgrade your phone.

Think about the expansion of the Angry Birds brand. There are little stuffed animals of the birds available in gas stations, Angry Birds candies at the mall, and an upcoming movie scheduled for release in 2016. While Angry Birds might not have the seismic popularity to keep pace with newer casual gaming apps, it has penetrated a sizable segment of the consciousness, giving it invaluable brand recognition. Casual gaming apps seem like they have become this generation’s board game. When most of us were young, we were introduced to a series of board games by our parents, who likely played the same board games. Will we be introducing our children to casual-gaming apps? Not if they are overtly addictive and cause detrimental behavior. Fortunately for King.com, Candy Crush‘s elastic engagement makes it a casual game that we can all trust.

Every day, people claim to be addicted to something, whether it’s branded coffee, ethnic-food chain restaurants, or the latest technological device that marginally improves their lives while mainly just consuming their free time and money. All of these self-proclaimed addicts are making light of people with serious addictions that are deeply rooted in a person’s DNA or psychological state. These genres of consumer addicts shouldn’t be blamed for greatly misusing the term. Companies want you to believe that you are dependent upon them. They’re more valuable that way, more profitable, more important. Media cycles don’t help when they turn every harmless phenomenon or trend into an “addiction,” while negative trends are “epidemics” or “crises.” Regardless of the fate of Candy Crush Saga, it will always be an important historical product. It is the meaningless thing that finally beat our addiction to saying we are addicted to meaningless things.