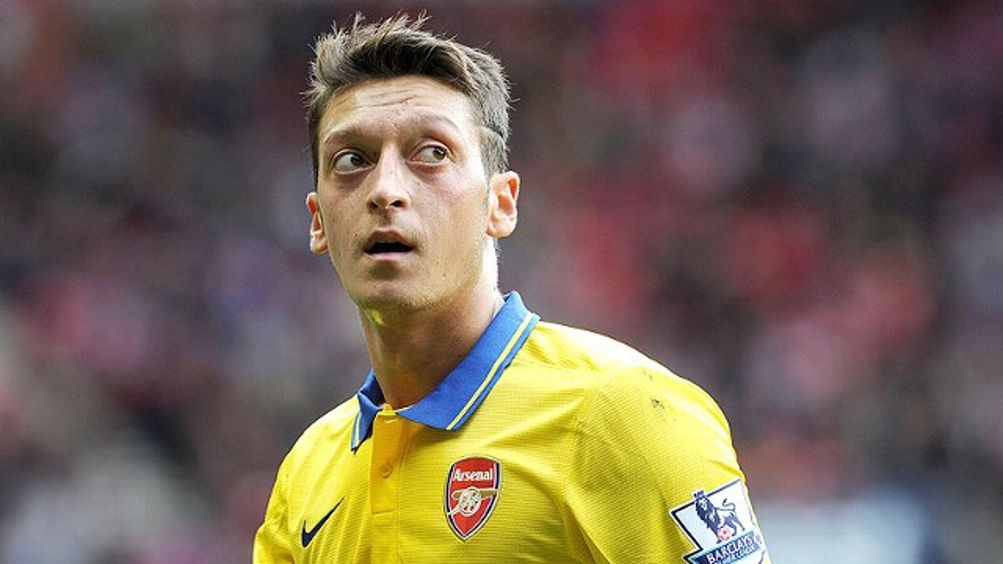 A couple of years back, in the “Hey, YouTube exists!” golden age of let’s call it 2007-10, it got to be a common thing for up-and-coming young soccer stars to release promotional rap videos. I’m talking European rap here, which blasted this trend into a whole other Bad Idea galaxy. You’d get these willowy midfield prodigies, kids who’d just signed their first £30k/week contracts, who’d barely even learned how to downshift their new Maybachs. Then suddenly there they’d be, shyly posturing in front of a studio mic while some mirror-shade-wearing Dutchman called DJ Hogwarts bounced around plaiting his Mennonite beard, nodding on one and three. It was a fascinating era. I miss it.

Most of these videos revealed nothing much about the player, at least beyond the fact that he had overly encouraging friends.1 But right before the 2010 World Cup, the German attacking midfielder Mesut Özil, who was then 21 and playing for Werder Bremen, cut a track with the Hamburg-based hip-hop impresario Jan Delay2 that I think explains a lot about him as a player. Özil’s verse … how can I even describe it? It is perhaps the worst instance of an athlete rapping. I know how incredible that sounds, believe me. I am shaking a little just from writing it. It’s like saying “The stegosaurus is perhaps the worst instance of a dinosaur going extinct” or “The rose is perhaps the worst instance of a flower.” But listen to this thing; listen. At least Delonte West is enthusiastic! Özil mumbles his lines, which he is reading from a piece of paper, with about the exact affect of a kid apologizing to another kid in front of all their parents. Özil makes Roy Jones Jr. sound like Percee P battling Lord Finesse in the Bronx.

But it’s the way he stands there, as John Lennon says in the movies. Özil is terrible, but he’s not hyper-self-conscious or ill at ease. He’s just in his own cocoon. His verse sort of lazes past you, as if it’s meant for someone behind you, or someone one dimension beyond. If you’re not paying attention, you might not even notice it’s happening. Apart from some quasi-rhythmic torso-undulating (pretty clearly coaxed out of him by Delay) and a couple of sheepish smiles for the audience (pretty clearly coaxed out of him by a frantic Nike rep off-camera), he seems, if not ignorant of his surroundings, at least undisturbed by the context. He’s performing, in the sense that he’s rapping in a studio and not actually asleep, but the pressure dynamic you associate with performance is beguilingly absent. He’s not thinking about your expectations. He’s just rapping, and this happens to be how he’s rapping right now, and maybe later he’ll eat a sandwich. It’s terrible, but it’s calmly terrible. It’s the terrible rapping of someone who feels both invisible and happy about it.

Invisible and happy about it,” “in his own cocoon,” “undisturbed by context,” etc. — these descriptors, you will probably not be startled to learn, apply equally well to Özil on the soccer pitch. It’s just that there, he’s calmly brilliant. Özil has been at the center of the Premier League news pulsar for almost three weeks, since his £42 million transfer from Real Madrid to Arsenal, agreed September 2, made him the first player the North London club had spent money on since, like, Eddie Hapgood in 1927.3 What’s been strange about this situation is not that Özil isn’t worth the expense or that he has underperformed on the pitch. (He’s played twice; he’s been sensational once.) It’s that Özil’s whole personal vibe is about slipping unnoticed into the flow of things. This is what makes him such a wonderful player; it also makes him the living antithesis of the headlines he himself has been generating. Seeing him bandied about as a marquee transfer item has been very precisely like watching someone who has no business in a rap studio and who does not care about being in a rap studio hang out in a rap studio.

I have no idea whether Özil will be a good signing for Arsenal. I think he will. But then again, I supported the Andrei Arshavin transfer when it happened, and that cratered pretty world-endingly about 12 seconds later, so who knows. But I love the Özil signing regardless of whether it works in the long run — it has worked pretty well in the short run — and for exactly the same reason I loved the Arshavin signing. I love it because Arsene Wenger, after eight years without a trophy, may be more embattled than any great manager in Premier League history, and he has reacted to the criticism by escalating his philosophy rather than revising it. There’s been a lot of talk about Özil as a bellwether of change at Arsenal simply because the club now seems willing to spend money. But stylistically? Özil represents Wenger trying to build the most completely fucking Arsenal team this side of Thierry Henry’s 30th birthday. He represents Wenger going for broke.

Pragmatic micromanagers probably win Super Bowls, but for the thrill of sports, give me a visionary any day. If you think back to the time before the Great Darkness settled over Islington, before the move from Highbury to the Emirates, back when Wenger was racking up undefeated seasons and stringing together titles like six-foot square passes, then you’ll remember that his approach at Arsenal was founded on two main tenets. The first was the one that gets all the attention today: Tend to your finances by fielding teams of undervalued assets. (This was an approach that worked noticeably better before other clubs decided they should maybe invest in a Dell and send a scout south of the Channel.) It was the second tenet, though, that seemed revolutionary at the time: win with style.

The notion that there’s something admirable about Arsenal’s self-appointed role as a bastion of footballing beauty has taken a hit over the last few years, especially in England. Partly that’s a simple consequence of the club no longer winning titles.4 Partly it’s a consequence of a lot of younger football writers being sick of hearing about Barcelona. The whole idea that soccer should be beautiful, that “football is an art, like dancing is an art,” as Wenger once said, is a little out of fashion at the moment. But 10 or 15 years ago, before tiki-taka and at a time when the Premier League was even less synonymous with short passes and attractive buildup play than it is today, those Henry-Bergkamp sides, with Robert Pirès and Freddie Ljungberg and (yes) Ashley Cole, felt like a revelation. They were hypnotic and merciless and did things that made you question what was possible on a soccer pitch. Even today, if you get out your old videos, those squads’ aesthetic coherence can be stunning. What we mean when we talk about beauty in soccer is often simply that the players look like they’re doing it on purpose — that rather than seizing on lucky bounces or hoping they can spot an advantage in a moment of chaos, they’re controlling their attack from start to finish, doing exactly as they please and making a show of doing it, the way Garrincha used to beat a defender and then dribble the ball back for the fun of beating him again. That’s a breathtaking challenge in a game where successful attacking involves a million coordinated variables breaking simultaneously and successful defending often means simply bashing the ball away.

Those earlier Arsenal teams did as they pleased, and not with the aristocratic gradualism of mid-2000s Milan or the oddly childish relentlessness of Barcelona. They just tore through you. They raced the ball up the pitch, fast but also somehow perfectly under control, and whipped it at the net. Then they gave it back to you. Then they took it from you and started again. They were an astonishing fusion of masterful and giddy. Wenger used to get on a high horse every once in a while about football as entertainment and value for the fan’s hard-earned shilling,5 but what stands out about those teams now is not simply that they were entertaining but that they were also in some way explanatory: They played soccer, a game whose disorder frequently verges on madness, at such a high level that you could watch them and understand the sport in a new way. They made sanity intensely compelling. 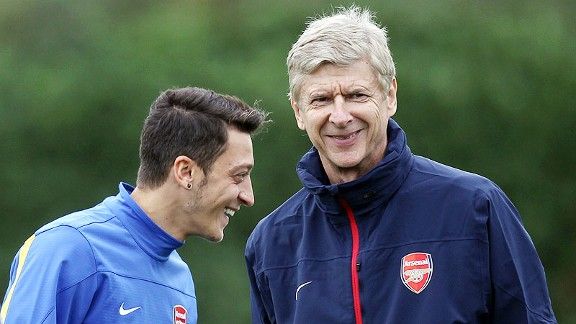 It will come as no surprise that I think there is a special type of soccer player whose purpose it is to achieve sanity on the pitch, and that I think Özil belongs to this type. These players are frequently, but not always, midfielders, and their main quality is that they have a knack for disappearing even as they’re dominating a match. The model here is Andrea Pirlo, not Zinedine Zidane; David Silva, not Yaya Touré; Luka Modrić when he’s at his best, not Arjen Robben ever. These are stars who somehow just glide out of the corner of your eye. Think about how long it took the world to appreciate what Xavi meant to Barcelona. Your invisible-genius player operates in his own cool bubble of omniscience, a private pocket of space-time from which he can direct a move while drawing attention only to the players who finish it. His role in a passage of attacking play is roughly analogous to that of the omniscient narrator of a novel — only by some postmodern twist, he’s also a character in the story.

If you watch one of Özil’s many skills compilations, you’ll see that he is a deceptively straightforward player. He’s gorgeous to watch in a counterattack, flying forward with that efficient, impactless ease some players have. Put a defender in front of him and he can charm his way free with any wild trick you like. He’s classically graceful but he treats grace as a last resort. But watching a skills compilation is really the worst way to understand Özil, because his real skill is for being where the camera isn’t. Özil’s real highlight clip would be full of shots of other people celebrating; you can get a sense of it from what Cristiano Ronaldo reportedly said when he learned of the transfer to Arsenal: “The sale of Özil is bad news for me. He is the player who knows best my movements in front of goal.” Özil moves, sure. But his game is knowing movement.6

And this is why he’s maybe the single boldest player Wenger could have gone after when he decided to blow £42 million. This is not a course-correction signing; this is the Bad Boy–era Pistons signing Mike Tyson as a small forward. Özil’s not the battling defensive midfielder fans have been clamoring for since Patrick Vieira left or the defensive bulwark the squad could use at the back. His tactical purpose is alchemical. For years now, the Arsenal first team has been made up of talented youngsters who occasionally dazzled the world (they beat Barcelona in the first leg of a 2011 Champions League matchup) but never quite cohered into the ruthless opulence of the Pirès era. By bringing in Özil, Wenger is attempting to find the catalyst that will transform the Wilsheres and Ramseys and Walcotts7 into something capable of the same murderous sanity as those earlier Arsenal squads. The uncharitable way to look at this is to say that Wenger is trying to prove his flat-Earth theory by sailing off the edge of the world. Then again, it may work. I hope it feels like flying.