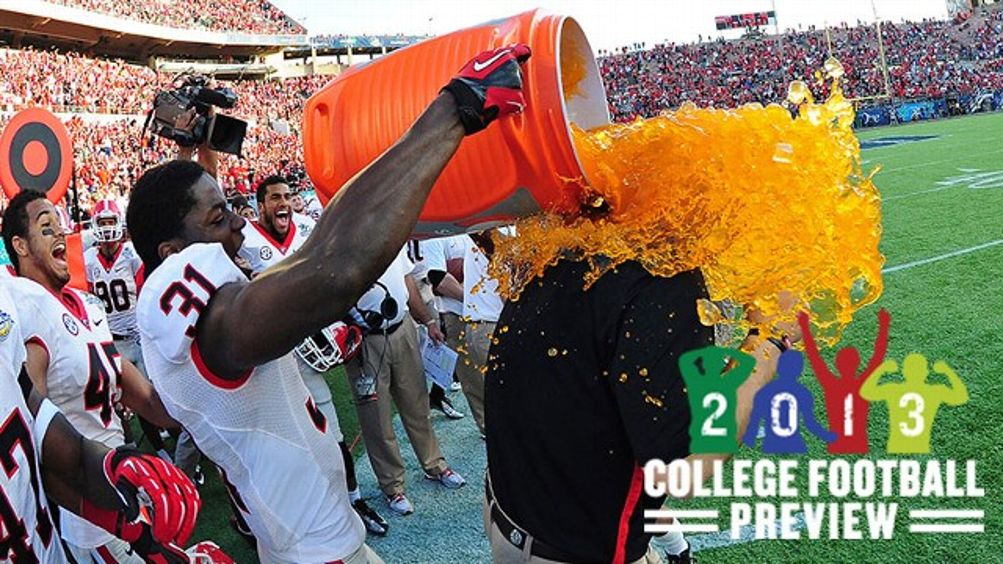 Mark Richt has seen worse, in his 12 years at the head of the Georgia football program, than what happened to his team in Atlanta this past December, when five more yards would’ve sent the Bulldogs to the national title game in place of the Crimson Tide.

Narrowly missing a shot at the title game is a nice fancy problem to have, and is surely more pleasant than losing to Central Florida in a bowl game, but to come this close:

Let’s just say it’s a rarefied environment to operate in, where a 12-win season culminating in a New Year’s Day bowl win can be viewed as something of a letdown, but other programs having bigger problems doesn’t mean the 2012 SEC championship game doesn’t smart. Dwelling on the loss would be understandable — and unacceptable. Richt must not only shake off his disappointment1 at the turn of the new year, but convince an auditorium full of teenagers and twentysomethings that it doesn’t matter anymore, that their frustrations are better channeled into their offseason workouts.

“I think they find out in a hurry that it’s a new team,” said Richt. “We try to turn the page. The season’s over. Whether we were close to winning a championship or went 6-7, you know? I mean, it’s over in the locker room after the last game of the year.”

Nobody had much time to stew over what might have been. Less than a week after the SEC championship game, practice was already under way for the Bulldogs’ Capital One Bowl date with Nebraska. And just days after the Dawgs’ two-TD victory in Orlando — before the new semester of classes had even begun — the team had reassembled to prepare for 2013. Like a lot of programs, Georgia’s team meeting room is set up theater-style, with seating by class. Seniors get the front row, then juniors, sophomores, and freshmen. And even in that first January meeting, says Richt, the remaining players understand there’s only one direction to go from there.

“There’s a few special guys that are young that get it, but there’s a lot of them that just have to start living it out first. The guys in the front row, they’re like, ‘I can’t believe I’m here. It happened so fast.’ And the guys that’re just starting out, they think they’ve got forever, and they really don’t. They think they do.

“And I just think the closer you get to that front seat, the more you realize time’s passing.”

Time is flying with particular fleetness this summer, as the Dawgs return 10 offensive starters and practically no one you’d recognize on defense to face a schedule that opens at Clemson and includes games against South Carolina and LSU, all in September. Get through that, three teams that would be sensible picks to win their respective divisions in the ACC and SEC, and they’re fine. It’s a tall order, and it’s nothing new. “I know this: We’re gonna be a really good team,” says Richt. “But so’s everybody else in our league.”

Have any of these replacement parts on defense surprised him this spring? Richt laughs out loud. “It’s just about the whole defense. People remember your seniors, and they remember who you signed, and they forget about the guys in between. There are a bunch of those guys about to get their chance.”

So: Mike Bobo’s underrated war machine on offense, the hurried construction of an almost entirely new defense, and staring down a September that will make or break Georgia’s 2013 campaign. Just another summer in the SEC. And like every other summer in the SEC, the perennially genial Richt is by all appearances just having a fine time.

“It’s fun,” he said, “to enjoy going to work every day in this type of business.”

• PRAY FOR THE ANNUAL HIGH DIVE. THIS IS NOT A DRILL. One of the most beloved rites of the preseason is Richt’s annual backflip off the high platform at a team pool party:

After enjoying jumps from high places into bodies of water since his teenage years, Richt may have to hang up his board shorts thanks to February hip-replacement surgery. “I’m trying to get my nerve up, but I don’t know how wise it would be to do that right now. I thought by now I’d be a little farther along as far as the confidence level to do something like that, but if you land wrong at all, and your legs spread a little bit in the process, it could be bad. Right now if you ask me, I’d predict that I won’t do it. Maybe I’ll go off the 3-meter, but the 10-meter, I’m not sure I’m ready for that.” Our sincere best wishes to Coach Richt’s hip, because without that backflip it’s not really gonna feel like the end of summer.

• Not an inch to the west, not an inch to the east. After a dozen seasons in the SEC, surely Richt has a favorite in-conference road trip destination or two? “There may be a couple. I just don’t want to give anybody any credit.” That’s the spirit.

• Does anybody actually like those original-song hype videos? Besides the overenthusiastic students in them? UGA has produced a couple of the most memorable examples of the genre, one starring Richt and his musically inclined son, David. “It was fun to do,” said Richt, “but it doesn’t even come close to showing what he can do. If that’s someone’s only opinion of him as an artist, that’s what I was concerned about. His music’s a lot deeper.”2

• There exists at least one FBS head coach addicted to Candy Crush. Mark Richt is not that coach. “My dad has more apps than me. He’s 76. I’m just shocked that he has all these apps that I don’t.”

• Don’t you deprive yourself. Richt limits his Twitter follows mainly to his assistant coaches and recruits, meaning he doesn’t get his daily dose of social media national treasure Watts Dantzler, but “I’ve heard some things.” We fervently hope this was one of those things:

This is what I say to Tornados pic.twitter.com/T6KL8pA0

If you are a Georgia partisan — or, like us, share a home with one — you are all too familiar with the pall a midseason loss to division rival Florida at their annual neutral-site game can cast on the rest of your calendar year. A Halloween weekend in Jacksonville can ruin your Thanksgiving with a staying power that’s not fully understood by mental health officials. What we didn’t know, until noted mathperson Bill Connelly went after it, was that the post–Cocktail Party boost or lull is, like, a mathematical thing:

Following a grisly 17-9 win3 over the Gators last season, the Dawgs enjoyed a cakewalk to the SECCG: 37-10 over Ole Miss, 38-0 at Auburn, 45-14 over Georgia Southern, and 42-10 over Georgia Tech. The 2012 Cocktail Party was maybe the worst-played game we have ever seen happen in real life, but there was Georgia, lining up opposite Alabama in Atlanta that December. Whatever works.

We know one additional thing: If you are eager to not call it the World’s Largest Outdoor Cocktail Party anymore, Florida and Georgia faithful are equally eager to come up with a replacement moniker that is so much worse.

• Required viewing: Those first two games are among the only compelling contests on the Dawgs’ 2013 slate; apart from a late-September visit from LSU and Florida in early November, all Georgia opponents look handily beatable. If Richt can get his squad through the first month, it’s a smooth coast to the Cocktail Party with an even steeper plummet following.