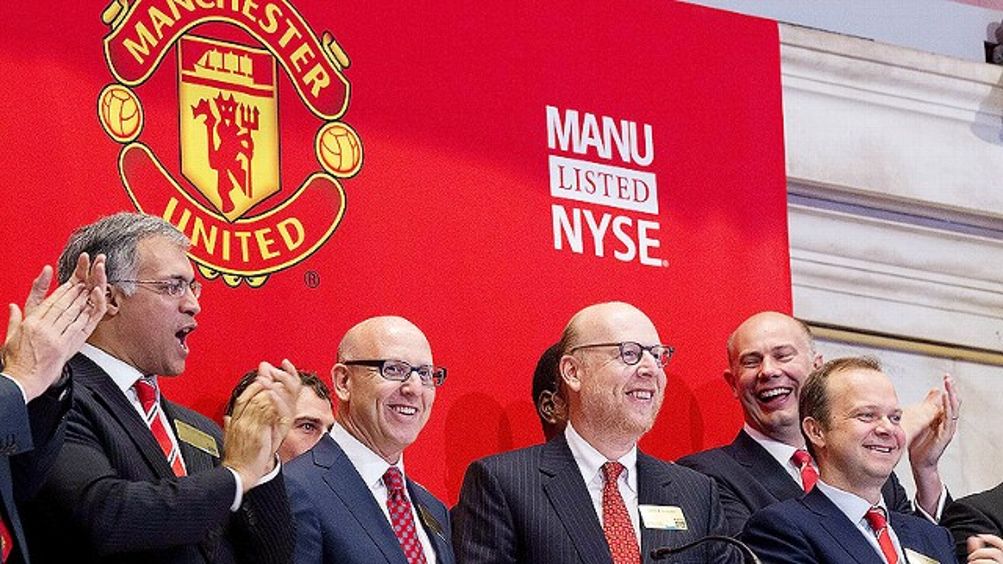 We are all fans here, and part of being a fan involves the desire to prove that you are as much of a fan as the next fan. From lightning round recall of stats or trivia (“Favorite actor: Denzel Washington”) to the authenticity of having been born into your allegiances, there are plenty of ways to win in the homosocial arena of the bar or friend-of-a-friend’s living room. But how many of us are willing to further incentivize those till-the-death allegiances — to make a literal, binding, supra-tattoo investment in a sortie of dudes we will never meet?

Last Friday, Manchester United’s brain trust — those who sit several pay grades above legendary manager (and self-described socialist) Sir Alex Ferguson — floated 16.6 million shares — approximately 10 percent of the club — on the New York Stock Exchange. This wasn’t United’s inaugural foray into the world of securities, and American teams have traded in the past — Boston Celtics and Cleveland Indians shares, among others, were publicly traded for a spell before returning to private ownership in the last decade.1 But this was the first time in recent memory that an offering had been used to raise money with no single purpose (funding a new stadium, for example) beyond a vague promise to repay some debts.

According to Wall Street observers, United’s debut on the NYSE — complete with kitted-out traders — was one of the most anticipated public offerings since Facebook’s, and we all remember how that worked out. Splendidly! Facebook’s steadily declining share values have done little to disturb the fact that the IPO made the company’s principal stakeholders rich forever.2 Friday’s activity reportedly raised about $240 million for United, securing the club the title of the most valuable sports entity in the world and earning ownership and senior management some extra funds, a portion of which will be used to pay off the club’s mounting debts. If you are a child or blissfully ignorant of how the economy works, all of this might seem magical, like generating value out of thin air, or at least monetizing the promise that United — a 134-year-old football club, but also a brand, merchandising hub, and proud corporate partner — continues to win trophies and expand its global fan base. It may not have been successful from the perspective of the typical investor, but it accomplished its goal of making the club’s upper strata some quick cash.

The squeakiest among United’s fiercely loyal fan base have protested the stock flotation, as a continuation of an ongoing protest against everything the club’s owner, Malcolm Glazer (of American Football’s Tampa Bay Buccaneers fame), has done since taking over in 2005.3 For those who only care about wins and losses — or for those who accept that this is what it feels like to live in Late Capitalism — the Glazer Era was inevitable and has been, by most metrics, pretty fruitful: Since May 2005, United has won four league titles and the Champions League.

The intense localness and light jingoism of English soccer meant that an American owner was always going to have a difficult time ingratiating himself with the supporters. But the suspicion toward Glazer and his sons wasn’t merely born out of a light xenophobia. The Glazers represented a break from the tradition, albeit one that had been ebbing for the previous decade. United would no longer be a debt-free and faintly community-oriented club. United would be someone’s investment, and it would move forward ever mindful of the massive debt Glazer incurred to buy it, as well as the behemoth interest payments that loomed.4 Ticket prices were raised and, in recent years, United has exercised more discretion than usual on the transfer market.5 Friday’s sale did nothing to affect the club’s hierarchy: Because of the class of these shares, the voting rights associated with their ownership are negligible. According to the Independent, “a successful initial public offering would reportedly result in investors owning 42% of the shares available but only carrying voting rights of 1.3%.”

Despite my sympathy for the anti-Glazer movement6 and the many persuasive things I’ve read on the amazing Andersred soccer finance blog — I simply could not resist. The novelty of being able to say I owned a fragment of a piece of a speck of Manchester United was too much to pass up. At the very least, I would have a more legitimate reason than usual to do nothing but watch soccer on the weekends, “checking up on my investments” and such. I still had a trading account from when I was in the seventh grade and, thanks to a school project on investing, convinced that frozen yogurt was next (NASDAQ:TCBY). Just as Nelly had owned the Bobcats, my capture of Manchester United was but a click away.

For a few hours last Friday, I sat staring more intently than usual at my computer. I had bought a few shares of NYSE:MANU at $14.02, two cents above its opening price — not enough to jeopardize the household or anything, but enough to ask myself WHY THE FUCK I JUST DID THAT as I read some articles detailing the reasons why this stock made for a terrible investment. (There are too many to link to.) Those numbers on the screen represent actual dollars and cents I earned and have now lost, not “fantasy points.” I hadn’t invested a princely sum of anything. But it was the idea that I had somehow fixed my figurative fortunes to a loser. Did this portend a season of ignominy at Old Trafford? Were our crosstown rivals and their petro-overlords laughing at this pathetic attempt to drum up funds? Was this a metaphor for something? I contemplated selling and minimizing my losses, just so I wouldn’t have to think about it anymore. But that didn’t feel right. Did United give up after the Munich air disaster? Had Ferguson not rebuilt his clubs from scratch, time and again? Did this actually happen? This wasn’t just NYSE:ARS or NASDAQ:QQQ. THIS WAS NYSE:MANU.

Just as Nelly had owned the Bobcats, my capture of Manchester United was but a click away.

It was like watching some perverse Gamecast where there is no narrative or flow, just the random play of algorithmic abstractions. I realized I had bought high and watched with horror as I took a penny-size bath. I clicked refresh over and over, forgetting that only day traders tend to track things so feverishly, and that’s out of necessity. I was caught up in a twisted game of my own design. I kept repeating the words of Clive Tyldesley in the dying moments of the 1999 Champions League final: “Can Manchester United score? They always score.”

They did not score, and in this case, a draw felt like a humiliating loss. The trading day ended with United’s stock back where it began — a disappointing showing and a far cry from the now-laughable $18-to-$20-per-share valuation that had been rumored last month.

What exactly had I been rooting for? The notion of a “team” feels so quaint once “MANU” is one of many stocks clotting the ticker, with a value dependent on how successfully the debt’s been leveraged and how well positioned it is in the global tournament of brand recognition. Is it a franchise? A thicket of corporate interests, of which a team of athletes passing a ball to each other on a field of grass is merely one of many, diversified tentacles? Suddenly the notion of “outperforming the market” — the market being something that, by its very nature, needs to constantly grow — began to make more sense than ever. There are clubs that need to sell in order to buy, and then there are the ones whose resources — backed by debt or the largesse of an eccentric trillionaire — seem to grow exponentially, emergent “financial fair play” regulations notwithstanding. Even if I made back my pennies and earned a few quarters, I would never outgain the market, and that was never the point of United’s stock flotation. It was just a new form of merchandise, something solid melted into air.

I freely admit that there is a deep, stubborn naïveté to all of this. I was once told that I have the financial acumen of a risk-averse 80-year-old. (I was also once instructed by a venture capitalist to share my tips with him, just so he could do the exact opposite.) I hadn’t purchased these shares with delusions of making money. But watching the share price fluctuate only underscored the distance between me — one among United’s 660 million worldwide supporters — and ownership. I suppose I prefer a different kind of powerlessness. At least when you witness a sublime piece of skill or an epic comeback, it restores your faith in a different set of invisible forces.

Which isn’t to say we need retreat to some mystical and ever-innocent Way Things Used To Be, before the Dodgers moved to Los Angeles; George Steinbrenner; Mark Cuban and the owner-as-celebrity; lockouts and work stoppages; Sonicsgate; Yao Ming and overseas markets; Wilpon-Madoff FAQs; “Cablevision”; salary cap wizardry; naming rights; etc. These concerns have been subsumed as part of our everyday debates on the Internet and the AM band, and enough people have embraced the logic of the publicly funded stadium or worried about the media oligarch’s luxury tax or accepted that a bad team is free to pack up and go somewhere else that these things now feel as relevant to us as rosters and play-calling.7

Maybe what’s strange is that feeling of inevitability — of realizing that the childish irrationality of our allegiances is at odds with the increasingly strange realities of the bottom line. The trading day has just closed, and I’m back in the black. After dipping below $14 and momentarily streaking past $15, MANU settled at $14.15. I decided to get out before the situation worsened. I’m dumping my shares and investing in a Fred the Red loofah instead. There are some contests unworthy of the fan’s devotion.