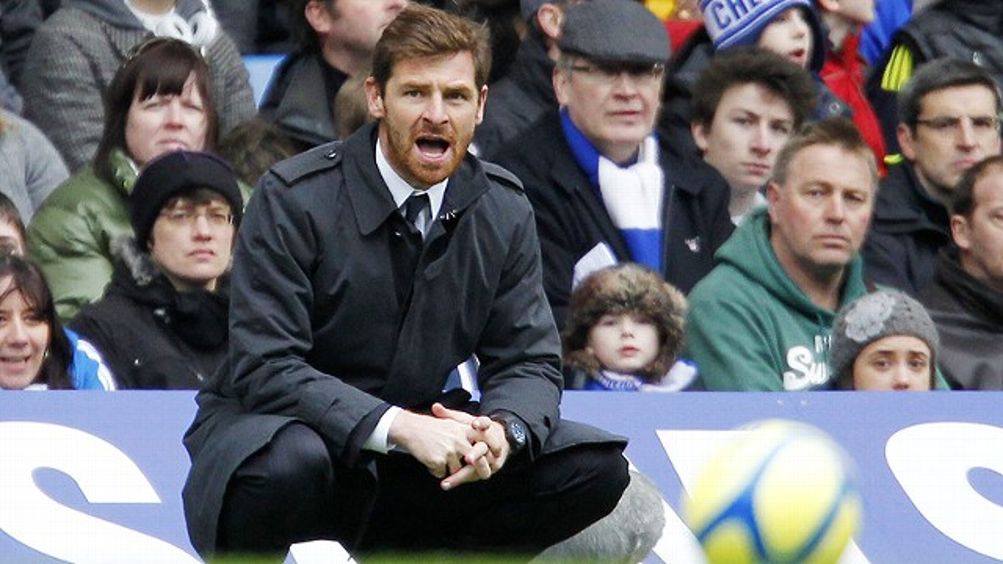 I want Andre Villas-Boas to succeed. It could be because he and I are the same age and I’d like to think I’m at the point in my life where I, too, could manage a Premier League club. (Hey, I’m keeping my options open.) Or it could be that I am mildly charmed by his roughly translated, vaguely post-structural declarations about time and space. For instance: “Players compete, in the end, for their place and for their place towards the future in the team. So if you want to be in the team in the future, you are competing to win something against your colleague. I would put it exactly like that: performance to have reward … reward in terms of results and reward in terms of future continuity.” Slow your roll, Roland Barthes. John Terry has not quite finished Elements of Semiology.

Anyway, I like him. But at this point I think most people would agree that the only reasons he still manages Chelsea are (a) It cost owner Roman Abramovich £13 million to buy him out of his contract with the Portuguese club, Porto, and (b) Roman Abramovich has been too busy in court to pay attention to his disheveled football team this season.

You see, Abramovich might dress like Steve Carell in The 40-Year-Old Virgin and more or less keep his opinions to himself, but there’s one thing we do know about the mysterious oil tycoon: he is a connoisseur — no, a collector — of objects that he considers beautiful.

This is, after all, a Russian billionaire who owns not only Chelsea Football Club but also a yacht called Eclipse. The Eclipse has a fucking submarine. His boat. It has a submarine. So obviously, we’re talking about a real aesthete, is what I’m saying. Entranced by the quick passing and attacking style of clubs like Barcelona, Abramovich has burned through millions and millions of dollars and several managers — including Jose Mourinho, Avram Grant, Luis Felipe Scolari, Guus Hiddink, and Carlo Ancelotti — searching for a tactician and a team that could give him the kind of submarine-on-a-boat ecstasy to which he is accustomed.

That’s why he hired Andre Villas-Boas. At Porto last season, AVB’s side played a high line, compressing the field, switching from defense to attack and swooping down on the opponent’s goal like dragons. In the summer, Abramovich let go of the well-liked, veteran manager Ancelotti and replaced him with Villas-Boas, assuming the meticulous Portuguese trainer would transplant the style of play he employed at Porto to Stamford Bridge.

Then Roman Abramovich went to court. For the last few months, he has been fighting a lawsuit from fellow Russian Boris Berezovsky. Abramovich’s countryman accused the Chelsea owner of betraying and intimidating him into selling shares of the Russian oil company Sibneft for “a mere $1.3 billion.” There are so many delicious anecdotes surrounding this case, including one where Berezovsky, after being allegedly blackmailed by Abramovich, answered this offense by refusing to invite Abramovich to any more of his parties.

While Abramovich made his case to the court, Andre Villas-Boas tried to make his case to the Chelsea players, the Chelsea fans, and the professional Chelsea watchers in the media. He talked about a new leadership, “a new way of being.” Villas-Boas would try to do what several titans of football management before him had failed to accomplish; rebuild Chelsea, both in terms of tactics and personnel, while maintaining the high standards to which the club’s owners, execs, and fans had become accustomed.

How has this gone for AVB? Well, you know the old saying, “You have to choose which hill to die on”? Yeah, well, Villas-Boas has chosen them all. During his short, strange trip, he has abandoned Chelsea’s stated youth policy, farming out some of the club’s mostly highly vaunted prospects (Romelu Lukaku, Gael Kakuta) on loan or burying them on the bench; he has sold two of the club’s most solid, veteran performers in Nicolas Anelka and Alex (who, despite being shaky, would have provided good defensive depth); and gone all in on the idea that Fernando Torres will start scoring goals (he won’t) and David Luiz will learn how to defend (ditto). Meanwhile, he’s benched Frank Lampard, which isn’t the worst idea, but doesn’t look so smart when playing Raul Meireles in central midfield — his lack of defensive commitment was obvious at Liverpool — is the alternative. Also? He marooned Daniel Sturridge out on the wing even though he’s one of the most dangerous attacking players in England right now.

Chelsea had a mediocre start and has just gotten worse. The team has recorded big wins over minnows like Swansea and Genk, but has yet to post a signature victory that could serve as a rallying cry for the season.

As Chelsea’s league standing has eroded, the club falling to fifth in the table, speculation has grown that Villas-Boas, despite the enormous price tag and awesome suits, could be out. The one way he could save his job and Chelsea’s season would be to win some silverware. Villas-Boas needed to advance past Birmingham in the FA Cup this past Saturday to quiet the Crouch End Festival Chorus singing for his ouster. Absurdly, Chelsea’s entire season and this incredibly young manager’s entire career would be decided in a domestic cup game, against a team from England’s second division.

And then they tied. And it was almost worse than if they had lost. Chelsea drew with Birmingham, 1-1, forcing a pain-in-the-ass replay for club. The Blues’ result against Napoli in the Champions League will probably determine whether or not Villas-Boas is the manager on March 6 when Chelsea plays Birmingham in the replay. But the result on Saturday said everything you needed to know about what the Chelsea players and fans think of Villas-Boas now.

On the side of the pitch, Villas-Boas is all GQ fashion covering up a nervous young man. He is twitchy, agitated, and, frankly, confused-looking. And he wears really cool coats. Like their manager, Chelsea’s players looked nervous and bewildered.

Villas-Boas played Ramires, Jon Obi Mikel, and Meireles in midfield. How did they do? This video pretty much sums it up:

Hindsight’s always 20/20 with these things, but more and more it looks as if Chelsea’s failure to pry Luka Modric away from Tottenham before the season began was a huge mistake. Chelsea, and more specifically its forwards, is crying out for a creative midfielder to link the play between the forward line and midfield. If the club knew it was going to stop playing it long to Drogba and start playing it on the ground, hitting Torres in stride on one of his galloping runs, then they needed a player who could make those passes.

Chelsea’s most creative player is Juan Mata, one of the standout performers in the English Premier League; he could be that player, but he tends to at least start on the wing. Without a creative fulcrum in midfield, Chelsea is stuck in neutral.

That being said, I don’t know if even Zinedine Zidane could have helped Chelsea on Saturday. You only need to look at the Birmingham goal to see the sorry state of affairs; five Chelsea players watching the ball bounce to Birmingham’s David Murphy, who launched it into Petr Cech’s goal. And when the ball hit the back of the net, the Blues had a look that said they’d rather be anywhere else in the world than Stamford Bridge. The Birmingham fans sang “You’re Getting Sacked in the Morning” to Villas-Boas as the home fans booed their team.

At halftime, Villas-Boas yanked Torres for Drogba and went to a more direct style of play. Chelsea got its equalizer from Sturridge in the 66th minute. It was almost bittersweet, though; Chelsea now has another match added to its fixture list: an unplanned trip to Birmingham.

After the match, with rumors swirling that Drogba himself gave the team talk at halftime, Villas-Boas was forced to answer pleasant questions like, “Will you lose your job if you lose to Napoli?”

“It’s not up to me to decide that. You have to ask that question to the right person,” he said, and then proceeded to grasp at straws and talk about how Torres, who reportedly stayed in the dressing room for the second half, understood that his benching was for the benefit of the team.

For most of the season, “the right person” at Chelsea has been otherwise occupied. But after watching his team over the last few weeks, you can safely assume that, unless Villas-Boas has a come-to-Jesus moment and his players have a similar come-to-Villas-Boas experience, the notoriously press-shy Roman Abramovich will take back his beloved plaything-in-blue.

Own Goal of the Week: Alex Oxlade-Chamberlain

This own goal, which sealed Arsenal’s exit from the FA Cup, might have been the most impressive athletic performance of the season. Oxlade-Chamberlain, who is probably going to be an absolute beast for England and Arsenal for the next decade, tracks back something like 90 yards to defend, only to catapult the ball into his own net.

Quote of the Week: Harry Redknapp

Acknowledging that FA chairman David Bernstein, who is considering hiring Redknapp for the England job, was in the crowd during Tottenham’s 0-0 draw with Stevenage: “I bet he was impressed with the football I served up, yeah. He was probably thinking, ‘who is this geezer?!'”