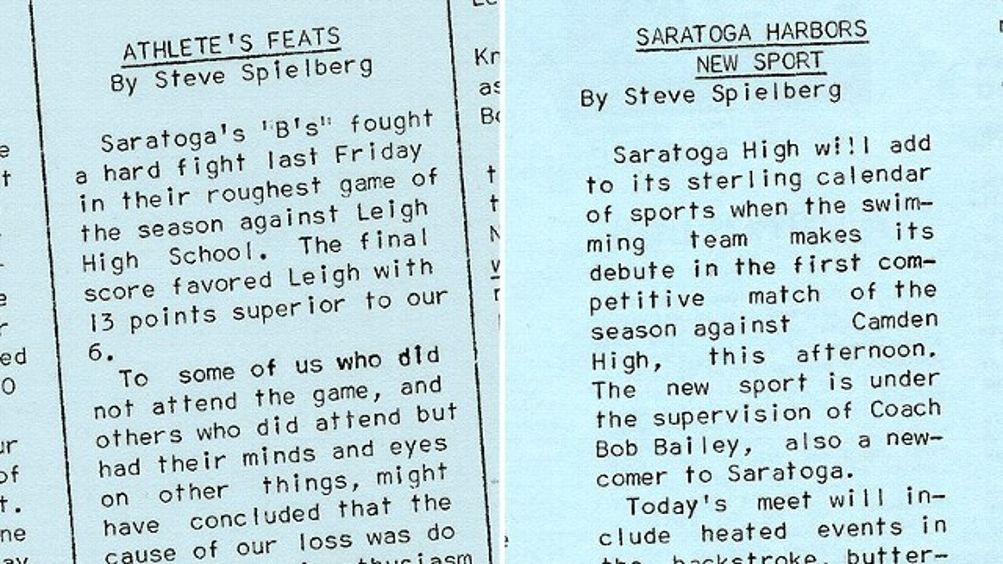 Go to a mysterious place called Saratoga High School, 50 miles southeast of San Francisco. Enter Room 303. Now, tiptoe through Mr. Tyler’s journalism class. If you make it that far, you’ll see a file cabinet. Open it. Inside, you will discover a half-dozen sheets of light-blue paper covered with type. These are artifacts. Sports articles.

As you read the stories of 50-year-old JV football games, you’ll notice a familiar name. The writer is the Oscar-nominated director of War Horse. His byline was “Steve Spielberg.” His column in Saratoga High’s Falcon was “Athlete’s Feats.”1 His attempts at poetry — “nerves were on the brink of disaster” — prove the maxim that the high school journalist is just good enough to write badly.

But for a biographical footnote, Spielberg’s sportswriting phase is particularly rich. Part of Spielberg’s genius is taking the terrors he felt as a kid and translating them, with eerie clarity, into blockbusters like Jaws, E.T., and Jurassic Park. When you read his sports columns, you get to see Steve Spielberg experiencing those terrors in real time. You begin to understand how sportswriting, like moviemaking, was one of the few things that helped Steve make it through the day.

This was fall 1964. Spielberg, 17, had just moved to California from Phoenix, where he’d directed the sci-fi movie Firelight and had gotten famous enough that a local TV station dubbed him a “young Cecil B. DeMille.” In the summer of ’64, he went to Universal Pictures and hustled his way into an internship. “I make movies,” he liked to tell people.

But few of his new classmates at Saratoga cared. Spielberg was just a skinny, smart-aleck senior trying to elbow his way through the social hierarchy. He was close to a nonentity. In the yearbook, he was “Stephen Allen Spielberg” — they’d misspelled his first and middle names.

Why sportswriting? To judge from Spielberg’s references to “basket accuracy” and “professionally executed” touchdowns, he didn’t know much about sports.2 No, the first reason he was drawn to the sports page is what we might call sports-as-movie. As his biographer Joseph McBride notes,3 when on assignment at a football game for The Falcon Spielberg would film the game with a movie camera rather than jot notes on a pad.

In an interesting way, sportswriting became Spielberg’s screenplay. Watch how he began his baseball-game story “Fluke Plagues Varsity,” in March 1965:

Those of us who strongly believe in fate as a documented phenomenon would have had a field day at the Overfelt-Saratoga baseball game last Tuesday afternoon.

It was in the bottom of the fifth … A chain of unprecedented errors plagued our in and outfielders and the scoreboard scrambled to favor Overfelt with five runs to our two.

A neat idea: a curse — a soul-snatching — causes a baseball team to fall apart right there on the field. You could say Steve Spielberg predicted Game 6 of the 2011 World Series.

Here’s Spielberg’s football column from a few months earlier: “As precious seconds ticked away, fingernail fragments flew high into the static filled air … ” See what he was doing? He was taking a chaotic action scene and reducing it to a single, memorable (and probably fictitious) image. Think of the bald, muscled Nazi luxuriously removing his coat before a fight scene in Raiders of the Lost Ark — that’s what Spielberg was going for.

Spielberg loved those flying fingernails so much that, in his Falcon column, he never got around to mentioning the final score of the game.

Steve Spielberg was pretty miserable in Saratoga. As his pal George Lucas once said, describing his own Northern California boyhood, “Although I had a great time, my strongest impression was that I was always on the lookout for the evil monster that lurked around the corner.”

One of Spielberg’s monsters was the slow and agonizing end of his parents’ marriage. His anxiety about kids losing parents, and parents losing kids, showed up later in movies like (and this is a partial list) The Sugarland Express, Close Encounters of the Third Kind, The Color Purple, Empire of the Sun, Hook, A.I., Minority Report, Catch Me If You Can, War of the Worlds, and War Horse. Leah and Arnold Spielberg’s constant arguing made Spielberg long for extraterrestrial deliverance. “I used to imagine strange creatures lurking outside my bedroom window,” he said after making E.T., “and I’d wish that they’d come into my life and magically change it.”

Spielberg’s other monster in Saratoga was anti-Semitism. He didn’t talk much about it until 1993, when he released Schindler’s List. Spielberg recalled classmates tossing pennies at him, as though he’d feel compelled to pick them up. They’d cough “Jew!” as he walked by them in the halls. He was angry and humiliated. As Spielberg later put it, “I haven’t gotten over it nor have I forgiven any of them.”

Writing for The Falcon was a way to navigate this “hell on earth”; in the high school social hierarchy, the newspaper is a third way between the dead-end nerdiness of the math club and full-on jockiness of the football team. Covering sports also gives the high-school reporter a comforting illusion: He feels like he is on the team even if he is not on the team.5 Spielberg’s sportswriting, says McBride, “was part of his attempt to placate the people who were giving him a hard time, by being a hanger-on, by being a cheerleader.”

Put another way: Young Steve was searching for an audience. He was trying to overcome his status as the new kid, the religious minority — and his need to be liked would infuse his movies. As his old friend Gene Ward Smith told McBride, “He didn’t fit my idea of how I divided the human race into two parts — ‘them’ and ‘us’ — ‘us’ is intellectual, ‘them’ is nonintellectual. To me, he was an ‘us’ but he wanted to make himself into a ‘them.'”

Sports, like bighearted blockbusters, was a foolproof way to reach “them.”

Steve was not a kiss-ass sportswriter. For a guy who didn’t know sports, he wrote like Leonard Shecter. “It was the weak defense that menaced our Varsity Basketball team to a grim defeat last Tuesday,” he wrote in one column. He tweaked his classmates’ “unpreparedness,” their “infinite penalties.” After Saratoga dropped a football game, Spielberg imagined a “cloud of disgust” forming on the coaches’ brows.

“In all probability, we could have won last Friday’s game,” he wrote another time. “Unfortunately, the flame of determination just wasn’t there … ”

I won’t venture too deep into Spielberg’s psyche. I’m not Tangina Barrons. But I suspect Young Steve was up to something sly by knocking the jocks. His strategy for fitting in had become a strategy for revenge. It’s the rite of the high school sportswriter. In my last high school column, I wrote a rip job about the baseball team’s failure of senior leadership.6 When I went to the school parking lot a few days later, the first basemen’s mom laid into me for betraying the guys I’d known for 12 years. She was right. My secret glee was that my career was beginning as most of the jocks were walking off the diamond for the last time.

For his snide remarks, Spielberg got it worse — and not from anybody’s mom. According to McBride, he told a pal, “They beat me up because they didn’t like something I wrote in the paper.”

Finally, Spielberg’s stint on the sports page offered him a small sense of control. Spielberg wasn’t the kind of kid who had much control over girlfriends (he had few serious ones). Or his grades (they were good but not fantastic). And he certainly couldn’t control the scene in the halls, where he heard the snorts of “Jew!”

But when Spielberg stepped behind a movie camera, he found his footing. While at Saratoga, he made a nifty posthumous tribute film to John Kennedy. He took a “Kennedy in ’64” campaign souvenir — a wind-up rocking chair that played “Happy Days Are Here Again” — and let it run till the music pitifully petered out. He made Senior Sneak Day, a movie diary of a noble Saratoga tradition. One of Saratoga’s bullies saw the movie and actually came up to Spielberg and congratulated him.

When Young Steve typed out “flying fingernail fragments,” then, too, he was reclaiming his own narrative. High school — his dreary idea of it, anyway — had been rebooted. “Once I could make films,” he said later, “I found I could ‘create’ a great day or a great week just by creating a story; I could synthesize my life. It’s just the same reason writers get started, so that they can improve the world or fix it.” After high school, Spielberg chose the doorway marked “Movies.” Those of us who shared his angst but not his talent? We stuck to sportswriting.