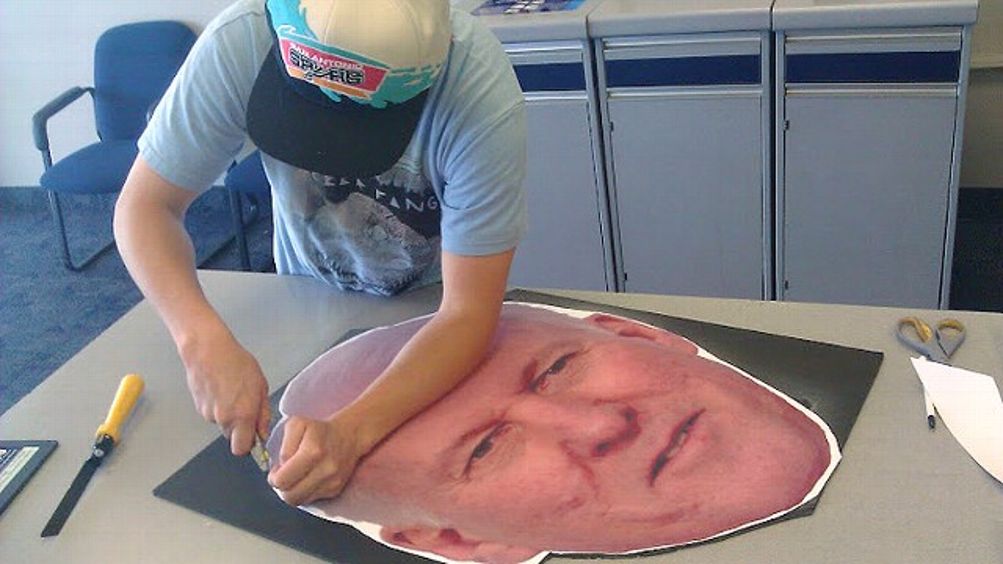 Oklahoma City has become the NBA’s most beloved small market. They have it all: a team of young players who transcend ‘big market individual player buzz,’ a picturesque TV fanscape, and the strongest overall ‘fan brand.’ Outsiders don’t quite think it is completely ‘pathetic’ for all of their fans to be wearing matching T-shirts in the stands. It is so cute for them to be experiencing success for the first time, serving as a larger metaphor for an American community coming together behind a team ‘doing things the right way.’

I decided to go to Oklahoma City to survey the authenticity of the fandom and get a better feel for a city that I would never otherwise visit. The idea of being a ‘road fan’ in a theoretically hostile environment at an important game was next on my list of ‘fulfilling sporting experiences that I romanticized since I was a kid.’ Also, it’s great to write for a website, visit a city, then make rash generalizations that are either too positive or negative.

The night before the game, my bro Travis and I went to a regional casino called Riverwind, 20 miles outside of Oklahoma City. That night Michael Bolton was playing, but the staff claimed that the turnout was terrible, resulting in a light Friday-night crowd. I was still surprised so many people were there, mainly playing slots, but I guess I’ve spent many nights mindlessly staring at a screen hoping for a stroke of luck to change my life, too. Tons of casino attendees were already ‘Thundering Up,’ wearing their playoff tees and hats to assimilate to the regional trend that is an NBA playoff run. Whether it was a slot-machine addict mindlessly pressing buttons on penny slots or a pseudo high roller throwing down two-figure blackjack bets, everyone was ready for the Thunder to tie up the series.

The Thunder have legitimately taken over the area, and it’s the ideal situation when a small-market team becomes imprinted on the identity of a region. There is definitely a feeling of ‘small-town chatter’ about the state of the team and the game on the horizon. Everyone wanted to be at the game to experience the sense of unity that you can gather from the ‘best crowd in the NBA.’ There is a fear of missing out on their franchise’s first championship-level playoff moment. It’s the right mind-set and one that I can identify with — I’ll always remember watching Sean Elliott’s Memorial Day Miracle on the big screen at my friend’s house in 1999.

On Saturday we migrated into Oklahoma City to attend Game 4 of the Western Conference finals. It was time to finally go to Chesapeake Energy Arena, or as it can be referred to by enemy fans, The House That Fracking Built. Oklahoma City feels like just about any other mainly suburban city with a strategic downtown development plan built to accommodate conventions and sporting events. The fans are new and pure, which enables them to exist in a ‘this is what sports are all about’ context.

The atmosphere of the game met expectations, but any team that has fans with pride probably generates a similar result during a playoff game. Thunder fans give so much energy, but eventually they will turn into nuanced fans, knowing that the veterans they’ve grown with only need their energy during key stretches. The Thunder fans were loud, but there was a neediness to their loudness, as if they were perpetually asking for reassurance. There was also a sense of respect for San Antonio as a franchise, just because of the similarities in team construction and their shared small-market inferiority complexes. Hopefully there isn’t a controversial moment that turns the rivalry hostile and bitter (unless the Spurs come out on top).

Earlier in the day, we spent about two hours at a local ‘FedEx Print and Ship Center’ making a giant Gregg Popovich head, attempting to escalate our level of fandom with a piece of custom stadium art. No, we didn’t endorse the practice of turning all the random things that Gregg Popovich said, like “I Want Some Nasty!,” into T-shirts, but the head would serve as a larger metaphor for Pop’s cerebral coaching brand. The Popovich head behind the Spurs bench would give the Spurs a sense of transcendent support in a hostile territory to fuel them to victory. 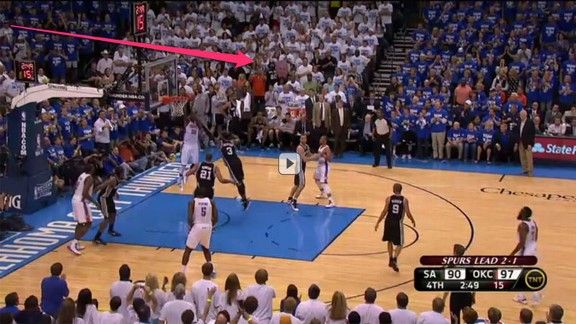 The Thunder dominated the Spurs, and it didn’t look like the Spurs really figured anything out between Game 3 and Game 4. The Spurs, for the most part, just looked confused and angry with each other. Only Stephen Jackson and Kawhi Leonard played with a semblance of focus in enemy territory. It’s hard to tell if the Spurs have ‘run out of gas’ or if they have felt another team seize destiny from them, ripping their championship heart straight from their chest. Sure, some elements of the game were flukey, but it’s not like the Spurs put out a winning effort.

Kevin Durant owned the fourth quarter and ended the game. My friend and I had hit a new low after experiencing the dark side of investing in the enemy fan experience. It was a dejecting moment, since we had anticipated winning the game just because of our mere presence in the sea of Thunder fans. We had sacrificed time, money, and logistical energy in a random-ass city to be closer to our team. It didn’t work out, and the game ended up being decided on the court. Or maybe the Thunder fans just beat us, too. After heckling Shaquille O’Neal for his subpar performance on Inside the NBA, we finally decided to leave the arena.

We stumbled out into the streets of Oklahoma City and saw a well-lit public basketball court within one block of the arena, which is basically only something that could exist in a safely developed downtown area. Two Asian college bros were playing basketball. Travis walked on the court and said, ‘We are going to play you. I am shooting for the ball right now.’ We operated a solid inside-outside game, playing with the heart and focus that we didn’t see from the Spurs in the last two games. We trusted each other, communicated on the defensive end, and made it difficult for them to get the shots that they wanted. It was a clichéd ‘anti-professional sports’ moment where we both wondered if we actually liked the Spurs or the NBA, or if we just loved the game of basketball. At least Travis and I won two games in Oklahoma City.

Here are a few other random observations about Oklahoma City:

Oklahoma City is hoping to ride the Thunder into a new decade of prosperity and development. The city seems destined to be overpopulated with ‘trying too hard to look urban’ new developments surrounding their downtown, just like in Austin, Texas. The personal culture is a more tolerable version of Dallas. It will be interesting to look at the city when Kevin Durant retires and there’s a pretty definitive model on the impact of a Hall of Fame player on the economic development of a ‘small market’ city.

Unless you’re from Seattle, it’s hard not to root for the Thunder, especially because they embody the whole ‘team’ gimmick that mirrors the spirit of America. Thunder fans should hope that one day, they will mature and learn to ‘act like they belong,’ along with Celtics, Lakers, Bulls, and Spurs fans. Right now, they are still in the honeymoon phase, where everything everyone does is just great. And, given what happened in Games 3 through 5, I suppose they might have a point.