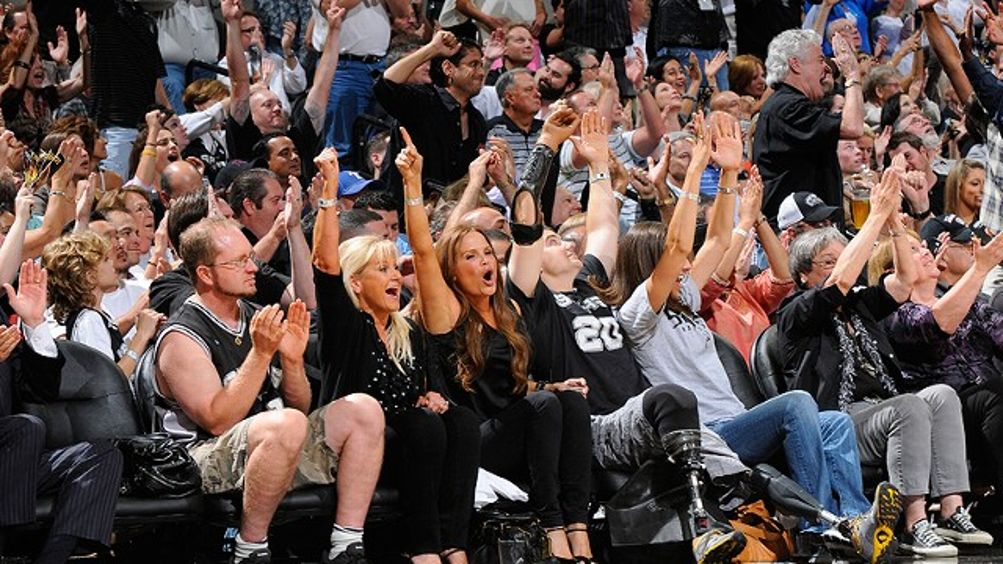 Staying home and watching the NBA has become a comfortable routine — I’ve become that young guy who thinks that sports are best consumed through HDTV and an open laptop. I’m afraid of missing out on the nationally televised context through which ‘America,’ a.k.a. ‘the Internet,’ consumes the game. How could I miss all the instant Twitter humor and tidbits? Becoming a glorified ‘writer on the Internet’ has led me to mastery in simulating experiences as if I have actually experienced them in a personal or tangible way.

Recently, my editor ruined it all by forcing me to go to a Spurs game in San Antonio. I utilized a last-minute StubHub grab to maximize value and proximity. My mind-set was, ‘If this is my only game of the season, I might as well sit really close.’ There is nothing more empowering than the feeling of descending down aisles and aisles of seats. Your face makes the ‘I don’t belong here’ grin. You wish you could build a time machine and tell your younger self that one day, it will all be OK, you will sit in the seats that you dreamed of. Then you feel like an a-hole, and realize some dude just scammed your inner child for mad bank on StubHub just because you are that à la carte consumer who has expendable income to waste on sports tickets.

I purchased proximity, status, and the opportunity to broadcast an elevated level of fandom to my social network.

I ended up sitting right behind David Robinson.

The city of San Antonio forces me to confront my past and evaluate the evolution of my fan behavior. I’ve gone to a few games in the past, but the majority of my Spurs memories were formed through television. This is a common middle-class experience. The only time you go to a game is when one of your parents takes advantage of a promotion through work that is basically aimed at filling some seats in the upper levels. You tell yourself that watching on TV is fine, there’s no overhead, and you don’t have to be one of those people who talk about ‘going to the game’ for the sake of inspiring the ‘Where are your seats?’ from the terrible people who are obsessed with status checking.

In order to ‘get off the Internet’ and enjoy real life, you have to surpass a break-even point that makes ‘real life’ worth it. A crappy seat with unlimited hot dogs, nachos, and sodas is no longer good enough for me. There is something inside all of us that is chasing the VIP experience, a special feeling that you are more important and relevant than everyone else in the context of your choice. I went through a phase of disenfranchisement and angst after too many sporting experiences in the upper deck. Sure, it’s part of growing up and sitting in the cheap seats with the bros, but then you look around and see families in their ‘as good as it gets’ situation. I’d rather pretend that the priced-out fans don’t exist, or at least hope they got a Black Friday deal on a massive television.

In a ‘small-market community’ like San Antonio, the franchise exists as this elite VIP status event. Basically, the city’s wealthiest people create a country club of premium lower-level seats. They put on their post-frat tasteful button-downs, overpriced and strategically faded denim, and yuppie-approved seasonal shoes, then greet one another like neighbors in an exclusive gated community. These people are not exactly the ‘car flag’ purchasing demographic, but that’s not to diminish their connection to the team based on their purchase of premium seats. Spurs fans are an army of faceless believers in our dynasty, maybe because we are the only people who believe it even exists. There really hasn’t been a definitive local celebrity in the crowd since Eva Longoria informally gave up the right to attend games after the Tony Parker sext scandal.

I went to the game with my friend KevCops. We got the ‘Oh this must be some a-hole off StubHub’ look from the people who actually belonged in those VIP seats. KevCops seemed out of place in his post-ironic Los Spurs Noche Latina limited-edition jersey, but I think the country clubbers were eventually amused by his out-of-place heckles, especially after a gaze of death from Mo Williams. Becoming ‘the class clown’ is sometimes the only social survival technique for an outsider in any context.

In that moment of VIP-ness, all I could do was mimic the woman in front of me who kept taking terrible camera-phone pictures the entire game. I sent my blurry, out-of-focus photos to my closest friends and loved ones. KevCops took it further and began FaceTiming with online contacts. This was our broment, forever. It’s difficult to orient yourself in your rented seats, and sensory overload can prevent you from even getting into the natural flow of the game. The game’s clinching third-quarter run, where the Spurs ran away with the game, was more of an emotional experience than the usual process of neurotically checking the score in the bottom corner of your TV screen. I could get used to premium seats, but I think I would need an entire season to learn how to absorb the whole game instead of trying to read the body language of every single player.

It’s always funny to discover VIP areas that you never knew existed in the lower levels of an NBA arena. Places where the hot dogs are grilled on an open flame, not left rolling on some weird metal hot dog maker. Bartenders serve cocktails to premium customers, instead of those diabetes-inducing frozen margaritas in large collectible cups. Employees in this section seem like they are trained in customer service, not just fetching stadium food. When it comes to the game, there’s obviously so many ‘nuances that you can only pick up in real life’: the ability to notice size differences of players, seeing the passing angles that Chris Paul takes, being close enough to remind Nick Young that he’ll always be a Wizard.

It’s human nature to want to be close to something or someone that we love, but I feel like the hunt for the VIP experience within our beloved pastimes has created a new fan dynamic at any relevant cultural event. For some people this drive is a fatal personality flaw that makes them the most annoying people in their Facebook feeds, but it is also a driving spirit of our economy to pull yourself up by your bootstraps and into a VIP area. There is an ultimate VIP experience we’re all searching for, in which we have unparalleled access, proximity, and the ability to broadcast to our immediate social network how close we are to famous people.

On the other hand, it’s weird to ‘be an adult’ and finally understand how much things cost. Will I ever have enough money to buy premium season tickets, and if I did, wouldn’t I just buy a sensible Kia to jump over? That’s why I love the sports blogosphere so much. Not everyone can be a local sporting-event VIP, but we can hyperconsume information to compensate for any insecurities and inadequacies that we have. It’s so much easier to base your self-worth on the size of your television and the type of computer you have than to actually attend a sporting event where you are visibly organized into a class system.

Whether it’s a music festival, an NBA playoff game, or some dumb party where famous people are hanging out, sometimes you just have to remind yourself how much more a previous version of you would have enjoyed it. Then run back to the Internet and write about it in a way that makes you sound self-aware yet ungrateful.