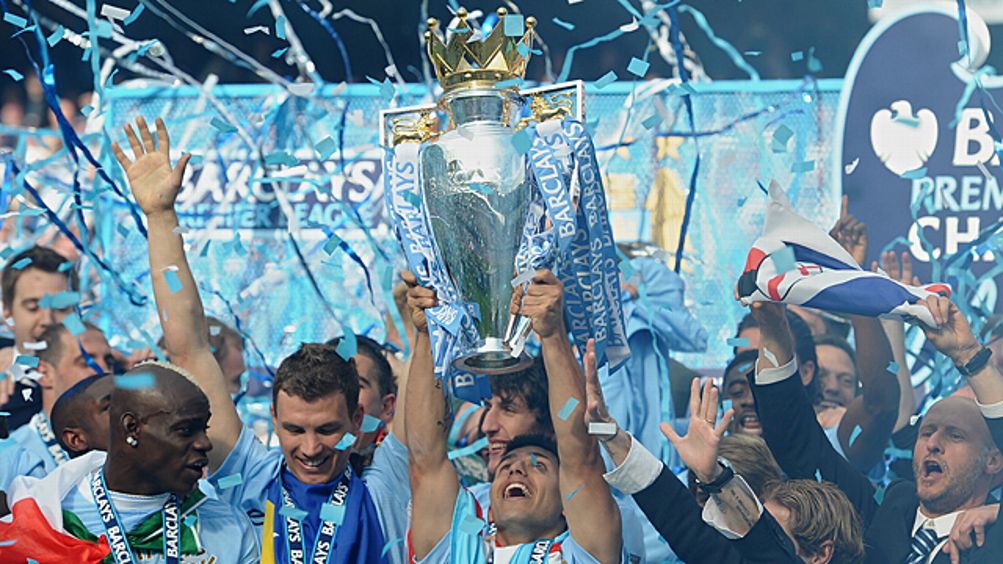 For nearly three years, I’ve been giving myself the same speech. Since my one and only heartbreaking trip to Old Trafford in the fall of 2009, it’s been the go-to pep talk for the voices inside my head.

Having supported Manchester City since the age of 11, finally daring to step inside Manchester United’s famous ground as a 40-year-old and then being forced to witness City lose a soul-crushing classic to a Michael Owen goal that made it 4-3 nearly two minutes after the final whistle should have been blown, this became my mantra:

Nothing can ever hurt me again.

Which, of course, is the most laughable lie I’ve ever uttered.

What happened to City (and me) back in September ’09 was a mere scrape compared to the face-first impaling we flirted with over the weekend. For 91 minutes on the final day of the closest title race in Premier League history, every bone and muscle ached for every long-suffering Blue on the planet. For 91 agonizing minutes of a match that would mercifully last 95, I was fairly certain that Jana Novotna would have let me cry on her shoulder, such were the historic depths of the unraveling to which Calamity City, as we’ve been called over the years, so nearly plunged this time.

By now, I suspect, you know the basics. And if for some reason you didn’t catch SportsCenter‘s blessed two-day infatuation with this one-of-a-kind roller-coaster, here was the deal: Needing only a home win against the team with the worst away record in the division to clinch the club’s first league championship in 44 years — with the visitors playing most of the second half with only 10 men — City tried instead to give us the soccer equivalent of that one-foot putt I.K. Kim yakked in April to cost herself a major.

That is, until City turned it all around with this and this to change the course of the club’s history after four full decades of mostly sabotage.

So many people have asked me what it was like to get the best of United at last in such an unfathomable way. The unglamorous truth: I spent the bulk of that frustrating half-hour after the sending-off of City castoff Joey Barton and before the goals of salvation sneaking looks at my kids’ reactions to the unfolding disaster. I like to believe that my path to City fandom was destiny, but I couldn’t stifle the feelings of guilt over Connecticut-born Alex (8) and Texas-born Aaron (5) adopting my club as theirs. Because they didn’t need or deserve misery like this.

“Typical City” is what they’ve called it in Manchester since the ’80s. And this was the ultimate exhibit: Fall a seemingly fatal eight points behind United with an Easter loss at Arsenal, miraculously erase the eight-point deficit with five near-perfect performances — including a win over United in the biggest Manchester derby ever — and then throw it all away at the finish line to hand the league back to the hated Reds and set up United for the most insufferable round of bragging rights imaginable.

This was so not what I was expecting on what they were calling Survival Sunday. I went into the QPR game convinced that we’d absolutely roll, borderline cocky in the belief that our time had finally arrived, having watched City play that virtually flawless football for a month after the Arsenal defeat when there was zero margin for error. If City could do that — if we had the steel to beat United on April 30 in the most hyped game in Premiership history and follow that up by going to high-flying Newcastle and winning there without a scare — how much resistance could Mark Hughes’s lowly QPR really muster?

So when Sergio Aguero’s goal went in with 94 minutes on the clock, after Edin Dzeko’s header launched the resurrection when all had looked lost, I didn’t even have the strength to celebrate. My kids were shouting and bouncing all over the room, but I just sat there in shock, completely overwhelmed, trying to hold back the tears. And failing.

My kids loved that just as much. They scampered away as I took it all in, screaming for Mom downstairs. They couldn’t wait to inform her: “Daddy’s crying!”

While the imperious Ian Darke and my old pal Steve McManaman were expertly capturing all the madness for ESPN’s American audience, I later learned that Martin Tyler had summed it up neatly for Sky’s viewers in the U.K., too: “From chokers to champions in five crazy minutes.”

None of this, of course, would have ever been possible if City hadn’t won the biggest sports lottery ever back in the fall of 2008. That’s when Sheikh Mansour inexplicably decided to dip into his bottomless Abu Dhabi riches, invest billions into Manchester’s beaten-down little brother, and instantly transform us into the richest club in the world.

But money alone could only catapult City back into United’s zip code for the first time since the late 1960s, when the Blues, believe it or not, were the power brokers in Manchester. To take the gargantuan step of actually toppling United and winning the toughest league in the world — to trump Sir Alex Ferguson at last — it would take more than obscene riches. It would take the craziest of comebacks, in a game for the ages, to cap a season of unmatched drama … as well as a slice of long-awaited (and long-deserved) good fortune that no one could ever buy. Not even the sheikh.

As much as I hate to admit it, The Sports Guy was right. Bill Simmons had the misfortune of watching a huge City-Tottenham game with me in May 2010, which meant watching me melt down in “Typical City” fashion as the newly rich Blues blew their chance to qualify for the Champions League for the first time, prompting Mr. “Now I Can Die In Peace” to write the following Boston Red Sox-inspired passage:

Yeah, I get it. You’re not even that mad. You just feel empty inside. You head into every big game assuming you will lose, and when it happens, it’s a self-fulfilling prophecy. You claim that you have your guard up, only deep down, that guard is lowered just enough that you’re hoping against hope that THIS game will be different. Only it never is. “I get it,” I said. I tried to explain to Steiny Mo that these things can turn only in the most dramatic of ways. It will never be a typical win. It will be a life experience. It will break you down in sections. It will take you to the abyss and back. You will have to be stripped of any and all hope, and then — and only then — will you see a light. That’s the way these things work.

When City went down 2-1 to 10-man QPR, and never looked like scoring all the way into added time, I had given up. All hope seemed lost. I was balled up in my chair trying to come up with something smart to say to cushion the blow for the boys. I was searching for the words I’d need to fill the 140 characters of the most dreaded concession-speech tweet of my life. Most of all, I was wondering how my closest Mancunian buddies Martin and Alan Dodd and Barry Gate were coping from inside the Etihad. They were all there in person in ’68, took me in as one of their own on my first-ever pilgrimage to the Great North West of England in 1996, and, like me, surely had to be wondering if it would ever be our turn to do what Fergie said we’d never do in his lifetime and consign the most famous worldwide brand in the sport to second place.

Turns out that the Blues had to bottom out one last time, imploding mere steps away from the tape, before they could rise up to overthrow the forces of “Typical City” once and for all. In those five crazy minutes, City turned what looked to be the sort of ghastly scar of a defeat we’d never, ever live down into a movie script that spawned record numbers of “I don’t like your sport but that was one of the sickest things I’ve ever seen” tweets.

In England, there’s a saying that comes in handy when trying to make sense of the unexplainable in this game: “Football, bloody hell.” For me, learning how to process success is clearly going to take some time. But something tells me that maybe, just maybe, I’ll start figuring that part out from here.