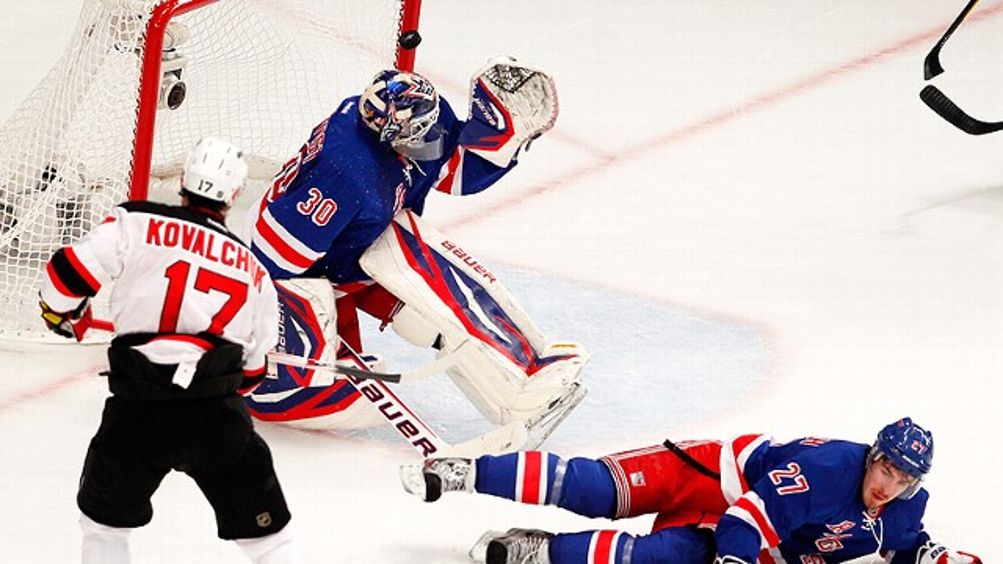 It’s a tough place to play,” Martin Brodeur admitted following his 23-save, Game 2 victory at Madison Square Garden on Wednesday, a place filled with people who love to fancy themselves as making that uniquely so. But he wasn’t talking about the Rangers fans. “There’s so many bad bounces,” he went on. “The ice is not good, the boards are awful and the glass makes crazy bounces everywhere.”

Brodeur has long been outspoken, but he’s also now 40, placing him in a whole new DGAF stage of his career. (He’d be simpatico for many reasons with another known quadragenarian, one being that Mother, mother ocean, I have heard you call / Wanted to sail upon your waters since I was three feet tall actually makes for a pretty decent dig on the infamous MSG ice.)

After Game 1, he was asked about another aspect of playing the Rangers — their dedication to blocking shots — and gave a similarly unflinching response.

“They’re hot at blocking shots,” he said. “We might be able to hurt a few guys hitting one-timers in the foot and their head or something.”

The Rangers have gone with their shot-blocking, slot-collapsing system for pretty much this whole season, but it wasn’t until they came up against the fleeting Hunter Hockey of the nouveau niche Washington Capitals that observers began to completely freak out. Suddenly, shot blocking was no longer a celebrated act of selfless abandon: It was a pernicious vise on everything there is to love about hockey — and it must be stopped.

Without getting too bogged down in the particulars of all the arguments (many well-taken) about the perils of blocking shots, I’ll just give you an idea of the movement’s zealous fringe. The Hockey News‘ Ken Campbell turned to religion to assess the problem, writing that “the only thing we can do is hope it doesn’t succeed, because Lord help us if it does.”

“NHL Home Ice” on SiriusXM radio likened it more to biological warfare, calling it a “pandemic.” And Eric Duhatschek of the Globe and Mail found the status quo so dire that it merited a nostalgic trip back to an idea from the mid-’90s that the NHL should institute “a modified version of basketball’s three-in-the-key rule.” Can you even imagine?

Many of the arguments are silly. Rory Boylen, Campbell’s colleague at The Hockey News, calmly took apart much of the shot-blocking hysteria — this is the lowest shot-blocking postseason in three years, he wrote, and “the Rangers, the whole reason this is even being talked about, are blocking fewer shots than a year ago.”

The NHL might be a “copycat league,” but there’s no reason to believe that the way the Rangers play is somehow infallible. (For starters, they’ve lost more playoff games this year than any other team remaining.) Hockey isn’t solvable, after all. It’s an endless game of rock paper scissors, where there will always be one thing that beats something else.

And as Backhand Shelf’s Justin Bourne wrote, “every year we see the recency phenomenon take hold. Remember when the Stanley Cup Final featured Michael Leighton and Antti Niemi?” The popular conclusion at the time — that you don’t need great goaltending to win a Cup — didn’t quite pan out as far as this year’s crop of conference finalists go. Just ask Martin Brodeur, who has been outstanding for the Devils this postseason. He’d probably be more than happy to chat.

As if the L.A. Kings hadn’t been offensively dominating their series against the Phoenix Coyotes enough, Jeff Carter — who had scored just one goal in the playoffs this season — began getting some bounces Tuesday night, finishing the game with a hat trick. It was the first Los Angeles postseason threefer since Wayne Gretzky had one in a 1993 Game 7 win over the Maple Leafs that put the Kings in the Stanley Cup finals.

The second of Carter’s goals was my favorite, but less because of anything he did and more because look at how fast the puck leaves Anze Kopitar’s stick even in slow motion. I half expect it to start moving backward like the rims on the wheels in a car commercial.

I was reminded of that laser on Wednesday when the Devils’ Ilya Kovalchuk cradled and unleashed the puck in a similar way to score the first goal of the game.

It might just be me, but doesn’t it seem like there’s been an uptick this year in the amount of time hockey announcers spend talking about “time and space”? Plays like this one, though, make you unable to think about anything else.

Piling On the Pylons: The Last Few Days’ Worst Performers

Another en vogue string of words in hockey is “compete level.” And just as with popular constructs like “wingspan” in basketball or “deep dive” in the business world, the term is used to mean both everything and nothing at all. Whatever it stands for, though, the Phoenix Coyotes didn’t have it on Tuesday night, according to the team’s angry goalie Mike Smith.

“As you get deeper in the playoffs, your expectations raise and the compete level goes up,” Smith said. “So far, I don’t think our group has upped our compete level to where it needs to be in the conference finals.”

The Yotes turned up their tempers instead. (If “composure level” was a thing, theirs would have hit Pittsburgh Penguins–like lows.) Phoenix captain Shane Doan was given a major boarding penalty and a game misconduct for a hit on Trevor Lewis in the second period; the Kings scored on the resulting 5-on-3. Smith himself was guilty of a substantial slash to the back of Dustin Brown’s knees, a calculated gamble that worked this time — Brown was assessed what seemed to be more of a lifetime-achievement penalty for diving rather than one that made sense in this particular context — but could cost him in the future. (I don’t think referees, having now been fed so much footage of Smith’s big swipe to the back of Brown’s knees, will be giving him the same benefit of the doubt next time.)1

In the third period, the meltdown continued. Phoenix’s Martin Hanzal joined Doan in the locker room with a game misconduct after a cut-and-dry boarding penalty on Brown from behind. (He was given a one-game Shanaban for the hit, and I was surprised it wasn’t two.) Derek Morris was then whistled for a kneeing penalty on Rob Scuderi that handed the Kings another 5-on-3 advantage — and another Jeff Carter goal. “Frustration can’t get the better of us,” coach Dave Tippett said after the game.

It was an uncharacteristic performance by the Coyotes, a team that during the regular season was the third-least penalized in the league. Even Scuderi said after the game that “it’s not as if they were the dirty team during the season or any of those guys are dirty players throughout the history of their careers.” Phoenix’s frustration is certainly understandable; top producers like Ray Whitney and Radim Vrbata have been as quiet as the Kings’ goalie has been quick. But if there’s one thing that won’t help fix things, it’s handing a man (or a two-man!) advantage to an already ferocious Kings lineup.

“If we feel we’ve accomplished enough by getting here, I don’t know,” Smith said after Game 2. “I’m not taking anything away from them. But I don’t think we’ve played near to what we are capable.”

Oh, hey, everyone is talking about John Tortorella’s monosyllabic and smirking and deeply personally wounding press conferences, which means that not everyone is talking about how the Rangers lost their third straight Game 2! What an interesting coincidence we have on our hands here. (Also, words cannot begin to express how badly I want this threatened media “walk out en masse” to actually take place.)