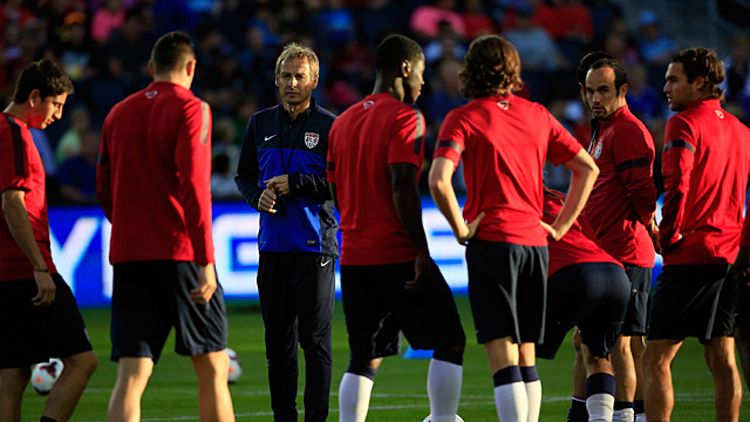 Why, hello there. The United States men’s national team qualified for the 2014 World Cup in Brazil thanks to a 2-0 victory over Mexico in Columbus, Ohio. The win means that the American fan base can stop panicking about whether the Stars and Stripes will reach the world’s richest soccer tournament (which, let’s be honest, was never really in doubt), not worry about Friday’s game with Jamaica, and start concerning themselves with the picking of the 23-man roster. Far be it from us to miss out on the prediction game. Without further ado, we present Jurgen Klinsmann’s 2014 World Cup roster.

These are the easiest choices. Howard and Guzan are shoo-ins, barring catastrophic injury. (And even then, they might still make the squad.) The only spot in question is the third string, and that should go to Real Salt Lake’s Nick Rimando both for the sake of tradition and because he’s the correct pick. Sean Johnson and Bill Hamid are a decade younger than Rimando and will insert themselves into the 2018 picture, but they are not nearly as consistent or as ingrained within this iteration of the Stars and Stripes. But getting the up-and-comers experience isn’t a priority at the World Cup. Historically, the USMNT favors experience over youth in net, taking Marcus Hahnemann as the third-stringer in 2006 and 2010 when he was 33 and 37, respectively. Howard, 27 at the 2006 World Cup in Germany, was the youngest goalkeeper taken by the Americans since Brad Friedel starred as a 27-year-old in 2002. A better debate than the third roster spot is the one about if Guzan can supplant Howard as no. 1.

If goalkeepers are the easiest group to predict, defenders are the hardest. The lack of clear starters at left and right back adds to the confusion. For now, Klinsmann prefers DaMarcus Beasley on the left. He’s probably a lock for his experience and leadership, even if he loses his starting spot to Fabian Johnson, who might be the best left back, right back, and left winger on the team. Regardless of where Johnson plays, the German (born to an American serviceman) will be in Brazil.

World Cup 2010 star Steve Cherundolo is going on 35 and battling back from multiple knee injuries, so Brad Evans, whom Klinsmann loves, is — shockingly — the pick at right back. I’ll take Michael Parkhurst’s versatility, experience, and defensive ability over Edgar Castillo’s nonstop forward momentum as a fullback reserve. Other outside possibilities include Timmy Chandler (not returning to the fold), DeAndre Yedlin (too young), Michael Orozco (not good enough), and Eric Lichaj (no love from the manager). Center back is easier, with Matt Besler and Omar Gonzalez as the presumed starters, backed by Clarence Goodson and jack-of-all-trades Geoff Cameron. John Brooks, who has the highest ceiling but is still just 20, will miss out on 2014 but anchor the U.S. into the next decade.

Michael Bradley, Jermaine Jones, and Landon Donovan can start looking for beachfront property in Rio. (There isn’t any available, but whatever.) After that, the choices get tougher, due to a wealth of options. Kyle Beckerman, despite his limitations, is a near certainty because the win against Mexico showed how effective he can be in an emergency. Maurice Edu and Danny Williams could make a case for his spot, but it’s the RSL captain’s to lose. Graham Zusi and Mix Diskerud should get the call, too, for their ability to add dimension to the attack. Alejandro Bedoya continues to shine in France’s Ligue 1 and, like Beckerman, responded well to a surprise start in Columbus. His pace on the wing and willingness to track back defensively will get him on the plane. Joe Corona’s versatility is the trump card over Jose Torres and Sacha Kljestan (who is perpetually the odd man out for reasons that don’t quite make sense) as well as the solid but uninspiring wing play of Brek Shea and Brad Davis.

The world, or at the very least the U.S. supporters, will expect Jozy Altidore to shine in Brazil. He will certainly have the chance to do so as he should start at the top of the American formation. Clint Dempsey will be in the starting lineup as well, with Eddie Johnson likely to see time either as a substitute or a spot starter. Aron Johannsson is new to the program and would be the youngest member of the 2014 team, but he fit into the system with ease during recent training sessions. Possible replacements include Herculez Gomez, Chris Wondolowski, and Terrence Boyd, but it’s hard to see any of those players taking the spot away from Johnson or Johannsson. Right now, none of that trio is better than the latter duo, and that won’t change before next summer.