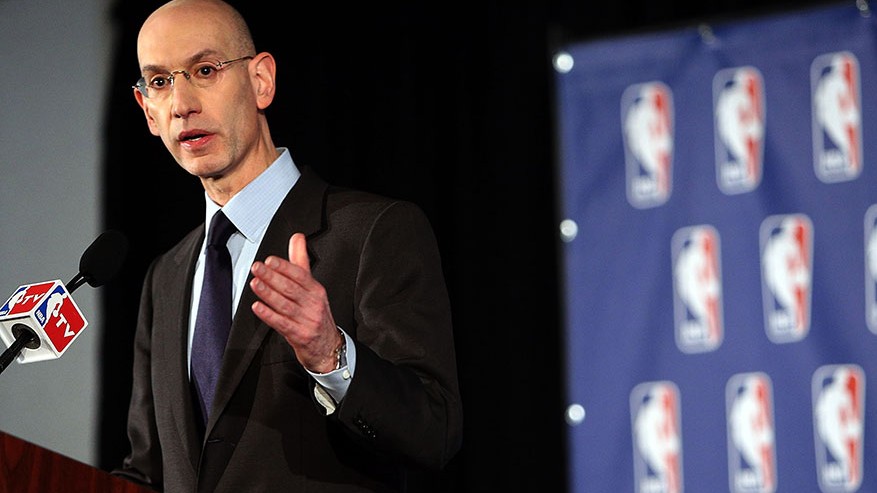 Everyone around the league was excited when Adam Silver took over as commissioner in February. He’s insanely smart, but also open-minded, calm, and friendly — a welcome contrast in those last three ways to his predecessor.

He’d exchange ideas with candor and patience, but there was an undercurrent of concern from a minority of those supporters: Did Silver have it in him to be an ass-kicker when the occasion called for one? A small subset of owners had seen him up close during the 2011 lockout and were confident; others worried Silver lacked Stern’s hammer. Those doubters shook their heads a bit when Malcolm Gladwell backed Silver into a few corners during a sometimes awkward one-on-one at the MIT Sloan Sports Analytics Conference in Boston, thinking, David would never have gone for that.

The concern was mostly about labor relations and TV negotiations, arenas that demand hard-line tactics that can rankle the league’s partners. The Donald Sterling situation was, in a way, a bit easier. Sterling is odious. He is a despicable racist. No one supports him, publicly or privately. Owner after owner said Sterling’s sentiments had “no place in the league” and expressed confidence that Silver would do the right thing. The message was clear: “Throw the book at him and we’ll back you.”

This wasn’t a gray-area case. It wasn’t an ethical quandary, but Silver answered the call on Tuesday more swiftly and strongly than most anticipated, especially since the league has passed on other chances to address Sterling’s known racism. He became the hard-liner, banning Sterling for life and announcing that he will invoke a clause in the NBA’s constitution that allows the league and its owners to force the sale of a team.

Silver responded to almost every question from the media with one-sentence answers. He was outraged, certain in his words. The league needs three-quarters of the owners to vote in favor of the forced sale, and Silver was not wishy-washy when a reporter asked whether he had the votes: “I fully expect to get the support I need from the NBA owners to remove him,” he said. Almost every team has already indicated publicly that they will indeed back the sale of the Clippers.

Another reporter wondered whether it was appropriate to punish someone for hateful words uttered in private, and perhaps recorded illegally. It was an attempt to introduce the bogus First Amendment defense that doesn’t really apply here. Silver could have given a vague answer, or spouted legalese about how the league exists in a weird legal purgatory between private enterprise and public “single entity” exempt from some antitrust laws. He didn’t: “Whether or not these remarks were initially shared in private, they are now public, and they represent his views.”

Translation: We don’t care about the origin. The guy is a doddering caveman, and we are excising him from the league.

It was a satisfying moment.

Silver is going to get the votes, even though there are some owners, including Mark Cuban, concerned about the precedent a forced sale might set. And once the votes are in, league sources say the NBA, Silver, and the league’s owners will control the franchise sale process — not Sterling. The league would vet bidders and make the final call on who gets to run the franchise next. The exact details of the process are unclear, but front-office and ownership sources across the league think the Clippers have a real chance to fetch the NBA’s first $1 billion sales price.

Getting top value will require rehabilitating the Clippers brand after several sponsors pulled out on Monday and Doc Rivers raised the possibility he would not return as coach. Rivers is a player magnet. If he leaves, it would shake a franchise that has been mostly incompetent under Sterling’s non-stewardship for three decades.

Sterling will of course reap the profits from the inevitable sale of his team, but the Clippers need to be on firm footing, both in the long term and tonight, as they continue their first-round series against Golden State. Silver nudged them back toward normalcy and into a less toxic place, though the players, media, and owners deserve credit for pushing the league to take swift and decisive action.

Sterling may fight the sale, but the league’s constitution is a powerful governing document. The lifetime ban should give Rivers and the L.A. players comfort that Clipperdom will be desirable to players going forward.

All of this has basketball implications for the rest of the league — if basketball even matters here anymore. Were Rivers to get out of his contract with the Clippers, he would immediately emerge as a leading candidate for any head-coaching job that opens this summer. That includes the Clips’ current playoff opponent, embroiled in its own internal chaos.

The Warriors in the last six weeks demoted one assistant and fired another, and ESPN.com’s Chris Broussard today reported that the team fired Darren Erman after learning Erman had recorded at least one coaches’ meeting. Multiple league sources confirmed the gist of Broussard’s report, and that Erman was concerned Mark Jackson and other coaches loyal to Jackson were insulting Erman to other players behind Erman’s back.

The team had no choice but to fire Erman. However, the front office is fond of Erman and was upset at having to let him go, according to multiple sources familiar with the matter. The Erman firing and demotion of Brian Scalabrine have raised tensions throughout the Warriors’ organization.

Jackson made a show of firing Scalabrine in front of players and other coaches, but he had no real grounds, and the front office made Jackson find a compromise, per a source familiar with the matter: demoting Scalabrine to the D-League. In addition, Jackson has asked that Jerry West, a high-level adviser in Golden State, not attend most practices and team activities, sources say.

The tension with Erman got weird. Midseason, the team moved Erman’s parking spot to a less convenient place, likely at the behest of Jackson or one of Jackson’s allies on the staff, per multiple sources familiar with the matter. They began changing his duties in strange ways.

The atmosphere has bordered on poisonous, though to the credit of Jackson, his staff, and his players, it has not spilled onto the court. The team plays hard, they’re very good, and they have a chance to make noise in the playoffs despite the ill-timed injury to Andrew Bogut. The players have almost universally spoken up, and quite loudly, in Jackson’s defense. But Jackson has continued to play five-man bench units, and the Dubs’ offense, mediocre all season, goes through stretches in which it is over-reliant on isolation. A full 52 percent of Golden State’s possessions this season ended after two or fewer passes, the highest such share in the league, per SportVU data provided to Grantland.

The consensus around the league is that Jackson is very unlikely to return next season, barring a longer-than-expected playoff run from the Warriors. That is always subject to change, and the team has not made a final decision yet. They have not reached out directly to any potential replacements, per sources around the league. Jackson can still save his job, but the smart money is on Golden State having a new coach next season.

The Warriors, in the event they move on from Jackson, would consider big names beyond Rivers, which is why the Knicks tried this week to accelerate their hiring timetable with Steve Kerr, per ESPN.com’s Marc Stein. New York knows that two or three other appealing jobs might come open after postseason eliminations, and that Kerr would be a candidate for some of them. Also, it doesn’t help the Knicks that Kerr has family connections up and down California.

All the dominoes in the NBA are connected, at least loosely, but that’s just basketball stuff. What happened today was larger than the game. It was an emphatic statement that the NBA is a progressive league that will not tolerate intolerance, bigotry, or repression. The league has the power to extend that statement beyond its 30 teams — into foreign countries, charities, youth basketball, and even its own labor relations.

Those things will be the true test of Silver’s tenure, and it will be many years before we can judge progress there. Banning Sterling was a simpler decision, but professional sports leagues don’t always get the simple stuff right — especially when it comes to broad ethical stances. The NBA did today. Good-bye, Donald Sterling.