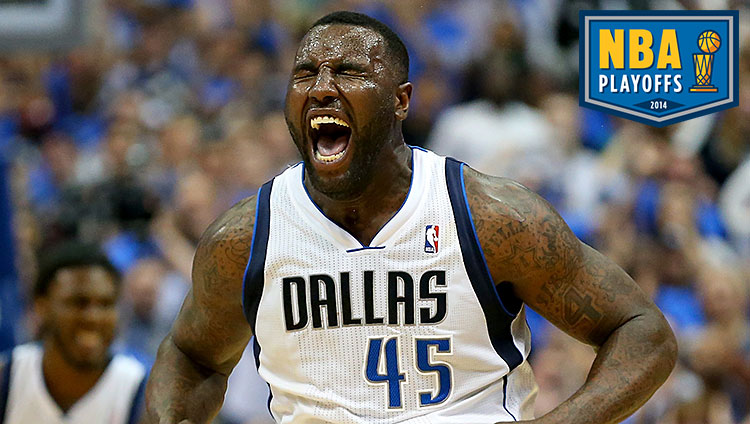 Monday night was basically DeJuan Blair’s Disney Channel Original Movie — let’s call it Small Giant. In Small Giant, an undersize center named KeyJohn Clair (played by Blair) languishes on the bench as his new team, the Pure-of-Heart Ranch Hands, falls into a 20-point hole against his old team, the Neoliberal Oil Titans, whose head coach, Glegg Proppovichesevich, cast Clair off merely because he didn’t like him. (I have yet to workshop this logline.)

It’s Game 4, and the Ranch Hands have a shocking one-game lead over the heavily favored, ice-hearted Barons, but if they squander it now, ALL HOPE WILL BE LOST. In a stirring third-act reversal — the first two acts are just, like, Clair shouting dad jokes at Matt Bonner from the bench — Clair takes the court and scores 12 points in the second half, propelling the Ranch Hands to a comeback … before he kicks Tiago Splitter in the head and gets thrown out of the game. Look, it’s time kids get a little taste of fatalism in their after-school viewing experiences.

Now, all of this is closely based on real life — you could even say it’s more “an actual thing that happened, except with overly literal pseudonyms” — and Blair’s “hostile act” prematurely ended one of the greatest nights of his career. This is all relative for a guy like Blair, who’s never been in danger of making an All-Star team. At this stage in his basketball life, avenging his dismissal by the Spurs with a late-game outburst is pretty much the best he can hope for, and if it causes Shawn Marion to make a joke about “hostile act” being an action movie, then all the better. Blair’s Monday night was his own Disney Channel Original Movie, but come Game 5, Mavs win or loss, it’ll be relegated to the Netflix micro-genre dungeon of time.

Barely, right? It’s already given way in the narrative to Blair’s Game 4 point-explosion-turned-bicycling-with-Tiago’s-skull. Carter’s shocking shot from the corner has become a part of the series’ DNA, but, with eight different playoff contests in action, and four games a night, it’s been squeezed out by the churn of new moments, new narrative-commandeering feats by new supporting players. Remember Mike Dunleavy Jr.’s 35? Do you even remember who Mike Dunleavy Jr. is? Have you been watching his hit television show, The Following? How many degrees of separation are there between you and Mike Dunleavy Bacon Jr.?

I AM NOT THE GOOD GUY.

The postseason eats itself. Troy Daniels may have shot his way into NBA 2K14, but if the Rockets bow out in Round 1, he’ll be put into hibernation for the next six months. There’s a constant jostling for screen time, and it only serves to accentuate the beauty of each bizarre moment. Even more than those random acts of transcendence in the regular season, the Garden scoring jags and LeBron/Durant demonstrations of power, we have no space on the shelf for keeping Dunleavy 35-point games and DeJuan Blair head-kicks and Troy Daniels 3-pointers around any longer than absolutely necessary. The real heads will be out here saying they remember every moment of the Mavs’ run to a trophy in 2011, but I can barely recall the first half of last night’s game, and it isn’t just because I have a dilapidated brain. Every morning, there’s last night’s action and the night to come. And it’s the night to come that offers what we love most about this whole thing: a new plot to twist.