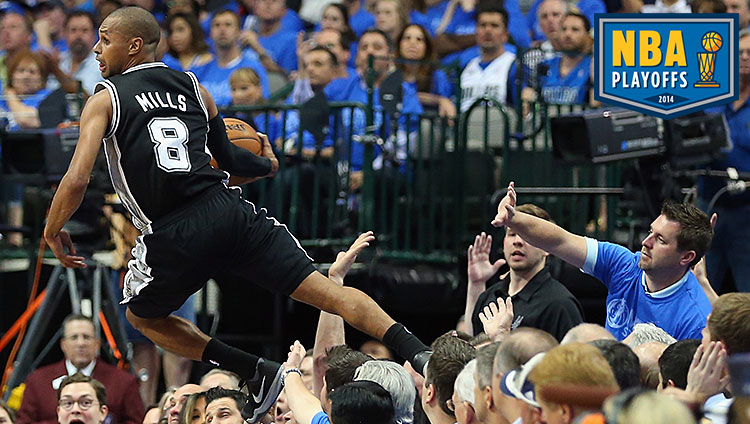 Texas Is the Reason

Chris Ryan: Because it’s not like we can last 24 hours without breaking out our NBA playoffs survival kit of rye whiskey, hot wet compresses, and pure oxygen, right? Another madcap nightcap. Let’s just put this in a list because I can no longer live in a world without order. Here are the best things about last night’s all-Texas duel:

Of course, in a game that featured possibly four Hall of Famers (Dirk, Duncan, Manu, Tony) and a positively Iversonian night from Monta Ellis, the guy who won the game was this dude:

@quixem depending on the pie, but probably cake

Boris Diaw had 17 points, 15 of which he put on Dirk, including this dagger …

He also made me cue up this Lloyd Banks nugget for the first time in, like, seven years.

Man, you want to talk about running the gamut of emotions. DeJuan Blair had 12 points and 11 boards in 16 minutes. He was the heartbeat of the Dallas comeback (the Mavs trailed by 20 in the third quarter), tamed a Spurs frontcourt that was doing whatever it wanted until he put ’em in a headlock, followed misses with putback dunks, and then kicked Tiago Splitter in the head and got ejected. They have written folk songs about lesser feats. They should write one about DeJuan. I don’t know who “they” are.

This came right after Monta got called for a 3-point shooting foul on Manu. Ellis got sandwiched in between Splitter and Ginobili, and Manu pulled a nasty rip through move on him. Basically, Ellis got Spursed. Rick Carslisle might not have Pop’s way with bons mots, but, man, he gives good face.

It says Monta went 6-for-20 in the box score, but I think this one dunk should count for 10 made field goals. The Mavs lost this game, and will probably lose the series, but I feel like they won the night. And Monta had an inefficient night and missed a free throw and a possible game-tying layup down the stretch, and I still feel like he was the man of the match. These playoffs have everything upside down and inside out, and a losing Monta is blowing up my heart more than a winning Manu. This is your brain on playoffs.

Honorable Mentions: The hand gesture the Spurs’ bench made when Kawhi Leonard dunked, the personality crisis Mavericks players would go through when guarded by Kawhi, all the crazy gestures Jose Calderon did whenever he hit a 3, Manu/Timmy pick-and-rolls, basketball.

netw3rk: Perhaps one day future NBA analysts will be able to look back on the 2013-14 Indiana Pacers and make sense of it all. We’re too close to it now, the smoke too thick. For the Pacers, I guess the best you can say about Game 5 against Atlanta is the final score wasn’t a complete embarrassment. Partial embarrassment, for sure, but not complete.

One thing that seems pretty clear: Roy Hibbert should be playing as little as possible in this series. The Hawks can run out lineups with deep shooting at every position, pulling Hibbert away from the hoop, where he transforms from daunting rim protector to newborn foal trying to stand up in the driving rain. Hibbert had zero points, zero rebounds, one block, and four fouls in 12 minutes.

Should Indiana even manage to survive this series, it’s an open question whether Hibbert can return to form. Since February, he has been free-falling in nearly every statistical category. Points, rebounds, assists, blocks, plus-minus, offensive rating, defensive rating, rebound percentage, true shooting, free throw percentage … all down, all while his usage rate has gone up over the same time frame.

Meanwhile, Mike Scott is drilling shots and running upcourt slapping his own ass while Frank Vogel looks like a guy who just lost his mortgage money on a horse race.

With One Hand Tied Behind His Back 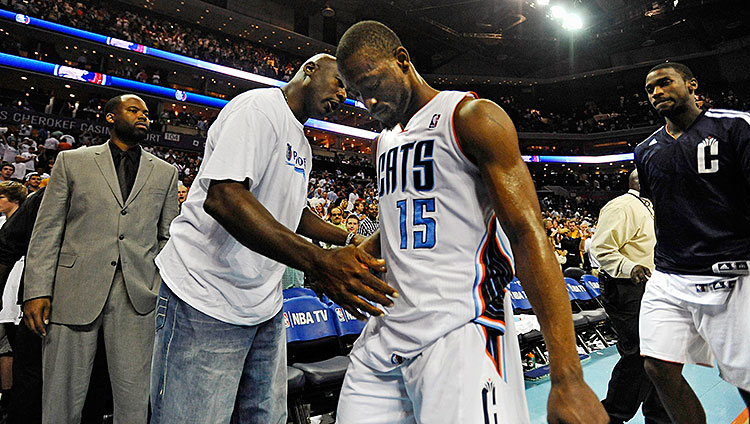 Danny Chau: The Bobcats lost the game and playoff series last night because LeBron James played at a level completely immune to defense. They lost because the Heat were the better team. But they were never rolled over. Charlotte won three of the four quarters, and if it weren’t for a third-quarter collapse, maybe this series would’ve ended in a gentleman’s sweep instead of the real thing. Losing never feels good, but for this Charlotte franchise more than any other, there are levels to losing. There is currency in losing close, hard-fought bouts with the defending champs. It’s not much, but it’s something. And something is better than whatever abyss the Bobcats have existed in the two seasons prior.

There are only so many ways you can say good-bye. The end came last night and it came peacefully. There were no regrets left on the table, nor any central issues left unresolved. Rest easy, Charlotte fans. There will be no ghost of Rufus haunting the Time Warner Cable Arena as the city and franchise usher in a new era. Rufus doesn’t have a reason to linger. The Bobcats are over, but they leave with the one thing that has eluded them from the very beginning: respectability. There’s Rufus fading into the light, and there’s Hugo emerging from it. In our last moments together, I just want to say thanks. Thank you, Bobcats, for giving us something to root for this season, for letting us in on your magical transformation. Thank you for showing us the many faces of hell. I liked this last one the best.