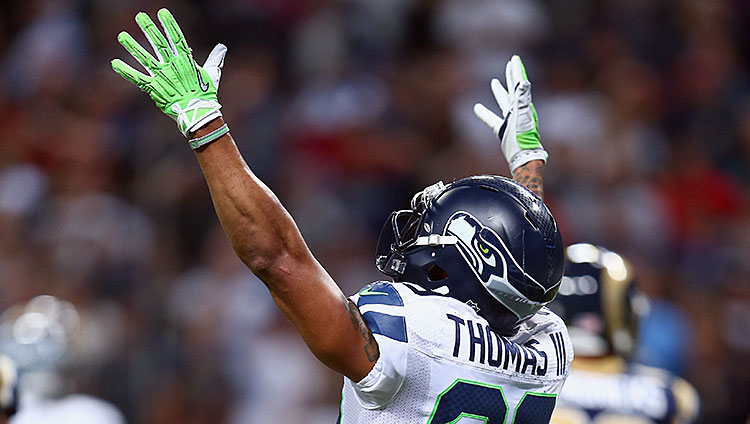 While everyone else was trying to figure out how the Saints fit Jairus Byrd under the salary cap with the massive deal they gave him last month, Earl Thomas was probably somewhere smiling. Last summer, after Byrd had been franchised and was looking for a new contract, Thomas made it known that he wanted his fellow ground-covering center fielder to get paid. Whenever Byrd’s deal came, it would set the market for free safeties, of which Thomas knew he would be king. He was right.

Seattle made Thomas the highest-paid safety in the NFL yesterday, with a four-year, $40 million extension that includes $27.75 million guaranteed — about $2 million more in sure money than Byrd got from New Orleans. The move was inevitable. Right now, Earl Thomas is the best safety in football and still only 24 years old. The Seahawks were going to pay up, and by doing so before Thomas was allowed to hit the market, they likely did so at a discount. If Byrd is worth $26 million guaranteed, 32 open checkbooks and teams with abundant cap room would probably have sent Thomas to at least $30 million.

What’s notable about the Thomas deal isn’t that he got it, but that it’s the extension of a trend in the changing positional values of players throughout the league. If we lump Thomas’s contract in with the rest of the 2014 free-agent class (and again, if Thomas had been a free agent, it probably would have been worth more), it means the two biggest deals handed out this spring were to free safeties.

That note is slightly misleading, if only because the tier of player at other high-paying positions doesn’t match Byrd and Thomas. While those two are maybe the two best free safeties in football, Branden Albert (fourth in the class in guaranteed money at $26 million) barely scratches the top 10 at left tackle. Still, Thomas’s haul is indicative of where future money might be headed.

If we exclude Eric Berry, whose $25.7 million in guaranteed money is a product of his draft position in the final year before the rookie salary scale, the next highest-paid safety in the league is Eric Weddle, who got $19 million guaranteed in his 2011 deal. That means that both Byrd and Thomas’s deals exceeded Weddle’s by more than 30 percent, just three years after he redefined the market. Compare that to cornerback, where Aqib Talib’s market-topping deal this year (considered an overpay by most) is just half a million dollars more guaranteed than Brandon Carr got in 2012 and $2.5 million more than Johnathan Joseph got from Houston three years ago.

Admittedly, Carr and Joseph aren’t the market setters at cornerback that Thomas is at safety. But Richard Sherman is. Sherman is reportedly next in line for a trip to the bank, but even if the Seahawks do make him the highest-paid cornerback ever, the deal would have to include $38 million in guarantees to match how much Byrd and Thomas have trumped their former positional market. That seems unlikely.

Comparing the raw totals, though, we can still see that the value is top-level cornerbacks over even the best safeties, even if that gap is closing. Where free safeties have gained the most ground is in the distinction between types of back-end players.

Back in 2007, fresh off his Defensive Player of the Year win, the Colts gave Bob Sanders a five-year extension worth $20 million in guaranteed money. Sanders was undeniably a force when healthy, but even considering how impactful those massive over-the-middle shots were, it’s hard to imagine a player with Sanders’s style getting anything close to that today (especially after converting that contract to what it would be with the rise in the cap over the past seven years). Somehow, it was $5 million more guaranteed than the deal Ed Reed was given 18 months earlier.

T.J. Ward wasn’t close to being the Defensive Player of the Year, but it’s arguable that he was the best strong safety in the NFL a year ago. Ward’s deal from Denver last month was for $14 million guaranteed, about half of what Thomas got from Seattle.

That’s where we’re seeing the emerging distinction between what type of safety teams now need as the centerpiece of a defense. Players like Ronnie Lott — the terrifying thumpers ruining worlds — were undeniably thrilling, but these days, guys like Thomas define what defenses are able to do. If Pete Carroll is painting a picture with his scheme, Thomas is the nail from which that picture hangs. By having a player like him in the middle of the field, covering more ground and taking away more space than anyone else in football, the Seahawks are free to do whatever they’d like with their 10 other players.

Don’t get me wrong — Thomas isn’t afraid to mix it up. He flies up in run support, is a capable tackler and a willing hitter, but that isn’t what made him the highest-paid safety in NFL history. Byrd isn’t quite on Thomas’s level when it comes to manning the middle of the field, but the idea is the same. As long as players like Calvin Johnson and A.J. Green exist, it’s going to be hard for safeties to get the dollars allotted to the league’s best cornerbacks, but if the past couple of months are any indication, that disparity is slowly fading away. There are plenty of people who would consider Thomas the most valuable member of what was a historically great defense, and it seems the market is starting to believe it too.