Steve Smith vs. The World 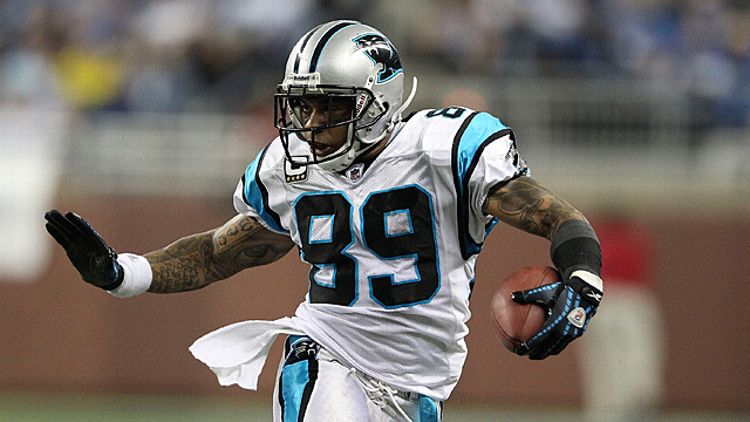 Steve Smith is a fighter. It’s just that he has spent 12 years in Carolina, playing pro football in college basketball country, on the maddeningly mediocre Panthers, so not too many people keep up with his battles. Hell, just the other day, he fired a shot across the bow of his ex–offensive coordinator, current Browns head coach Rob Chudzinski:

The prior offensive coordinator really was positioning himself to just apply for that head coaching job … I think our offense suffered a little bit because of that … At times, we got cute. We did things that weren’t necessarily us, like the under-utilizing of [running back] Mike Tolbert. But we’re out of that. The past is the past.

This is the you-get-half-a-bar of peer reviews if there ever was one. Football is supposed to be about individual battles and team wars and all that, but few NFL players actually exemplify that conflict and turmoil, nor show their emotion and passion inherent in living that kind of life, quite like Smith does. He is one of the more bracingly human athletes that I can remember watching. So here’s a look at his career, via some of his greatest bouts.

Steve Smith vs. His Teammates

Let’s get this out of the way first: Steve Smith beat the crap out of three of his teammates. In 2002 he got in a fight with fellow receiver Guilian Gary. Later that same year, he broke the nose of another receiver, Anthony Bright, during a film session. He was charged with assault for that altercation. Five years later, he again broke a teammate’s nose; this time it was cornerback Ken Lucas.

The account of the Bright fight is pretty horrifying, with reports suggesting that Smith became enraged with Bright after the practice squad player asked for a play to be shown again, and then jumped him after the lights were turned out during a film session (“all hell broke loose”). Bright wound up suing Smith in 2004, claiming that the fight ruined his NFL career.

Since I’m about to talk about what a badass Steve Smith is for the rest of this post, I feel like it’s only right to point out that he has done some pretty deplorable things during his playing career. He knows this; if you want to see how much these incidents have worn on him, watch the E:60 segment about his violent outbursts.

According to an ESPN The Magazine feature on the incident, it sounds like Lucas and Smith had been going at each other in practices when Smith snapped. And the aftermath of that incident has been kind of fascinating. For as disturbing as the fight was, their public and private reconciliation served as a catalyst for the team that season, which the Panthers finished with a 12-4 record. When Smith caught his first touchdown that season, following the fight, he ran over to Lucas and presented him with the ball. Lucas said after the game, “Since day one, since the moment it happened, he has done everything that a man could ever do from a forgiveness standpoint … My hat is off to him. I’m surprised, but I’m not surprised.”

Later, Smith would tell ESPN The Magazine, “Yeah, we’re friends … We just didn’t take the normal way of finding that out.”

Remember Bountygate? Steve Smith does. The Carolina man was one of those reportedly targeted by Gregg Williams’s league of extraordinary cheap-shot artists. Did Smith mind having bounties put on various parts of his body? “This isn’t powder puff.”

Steve Smith vs. Michael Johnson (and the frailty of his own arm)

In 2009, New York Giants safety Michael Johnson broke Smith’s arm. Then Smith broke his arm again playing flag football the following January, in 2010. Lesson one here is obvious: Don’t play flag football with Steve Smith. Lesson two: Steve Smith never forgets. When asked by Peter King if he would be ready in time to play the Giants in the 2010 season, Smith replied, “I’d bet my game check on it … I’m going after him.” Smith later apologized for the comments.

These guys were like Maverick and Goose from Top Gun, except in their version Maverick regularly flew his F-16 right into a mountain. I’m still not sure if Jake Delhomme’s 2009 season wasn’t an act of performance art. Right before the season, he got his five-year, $42.5 million extension. He then celebrated by essentially lighting all that money on fire, throwing seven picks in his first three games, including four in the season opener. It was during that game, against the Eagles, that Smith showed what kind of teammate and friend he was by … well, by sitting down next to a crestfallen Delhomme and breaking his balls a little:

“Hey, I know you feel like crap. I mean, you’re not a very handsome guy anyway, so. But, the performer, the quarterback … I never really liked you as a quarterback. But as a person, that’s who I love. I love you as a person.”

Hold on, that quote needs a soundtrack …

What the shit is going on here?

Sanchez’s reaction? “You have to ask Steve. I wish him and his team a healthy and successful season.”

Good-bye, Von Miller. They will sing your name in the Hall of Fame For Dudes Who Got Laid Out By Steve Smith.

Steve Smith vs. Referees and the Infirm

Here’s Smith after a 2011 loss to the Vikings: “If the ref says it’s holding, I can sit here and say this and that. But at the end of the day he’s the guy with the flag and he calls it … I got a few texts already saying in the HD it didn’t look too bad. But for a 70-year-old man gimping down the field, I guess that’s what he saw.”

The People vs. Steve Smith

Here’s a life tip: If you’re going to go at Steve Smith, know that he very well may go back.

Here he is getting after it with some Eagles fans:

And here he is arguing his moral responsibility to sign stuff for annoying, teenage Jets fans.

“I love my 14-year-old son, but if he was ever talking the way you guys are, he wouldn’t have any teeth.” Word. Parenting.

244 total yards againt the Bears in the 2005 playoffs. MAYYYYYYYS.

When the 2-8 Panthers met up with the 3-7 Eagles last November, Smith was asked to assess the entertainment value of the clash: “Oh, it’s real exciting.” In the same interview, he was asked how hungry Carolina was for a win: “How about malnutrition? Well beyond [hunger] … Searching through the trash, looking for any scraps. I think we’re there.”