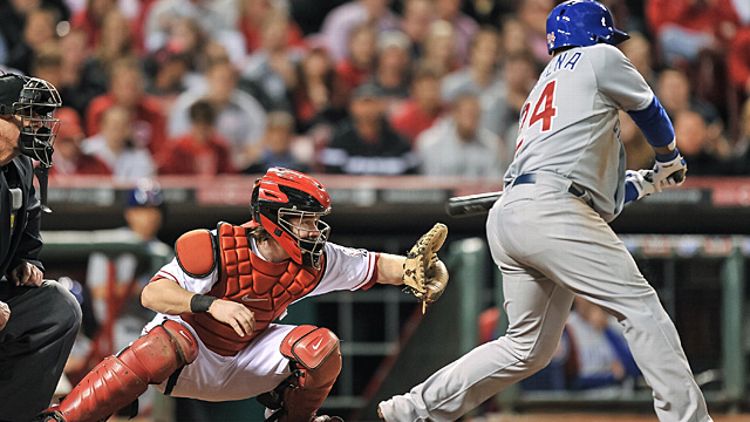 Ryan Hanigan has been a Reds catcher since his debut in 2007, learning the ropes as an understudy to David Ross and Paul Bako before backing up one of baseball’s worst receivers, Ramon Hernandez. After the 2011 season, the Reds allowed Hernandez to leave and handed the starting job to Hanigan, who appeared in a career-high 112 games in 2012. Despite being a backup for his first several seasons, the 32-year-old ranks ninth among major league catchers, according to Baseball Prospectus analyst Max Marchi’s catcher framing statistics, with roughly 57 runs saved due to framing from 2008 to present (or about 0.22 runs per 100 pitches, almost exactly the same rate as Russell Martin). Hanigan’s days in Cincinnati were believed to be numbered when the Reds developed two top catching prospects, Yasmani Grandal and Devin Mesoraco, but the team sent Grandal to San Diego in the Mat Latos trade and Mesoraco has yet to establish himself, so Hanigan’s hold on the job remains strong. I showed him some video and asked him to break down his technique (in a supply closet!) at Nationals Park in late April while he was recovering from a strained left oblique muscle on the 15-day disabled list.

Right here, you’ve got Masset, who’s got a hammer. It’s a big curveball. And there’s guys on base, so I’m set up to block, first. See how wide I am? You see how my elbows are inside my knees? Not all catchers can do that, but it helps, because I’m here already, so all I have to do is drop. If you’re outside your knees, you have to come in.

Are you setting up that low because you’re expecting a low pitch?

I’m setting up that low just because that’s where I set up, that bottom of the strike zone. But I just want to make sure I get my thumb under the ball. If I can get my thumb under it, then I can at least not let it go any further down. That’s the whole thing. It’s about how far your glove moves.

You want to mask the fact that it’s probably out of the strike zone by not obviously moving the glove down to it? Are you trying to reach out and catch it?

Click here for all of our interviews with fascinating people from the worlds of sports and pop culture.
Yeah, before it gets lower. If it’s a high one, I’ll let it get way deep, so it’s [holds glove close to chest], but if it’s low, I’ll try to catch it as far out as I can so it doesn’t get any lower. That one, it’s all about being in a position to block with guys on first and second and a curveball coming.

So with runners on, are you not primarily focused on framing the pitch?

I’m always focused on framing strikes. But I wouldn’t catch that the same way if no one was on base.

From 2008 to present, Hanigan has been above league average in getting strikes on called pitches outside the zone by 2 inches or less:

You’re setting up on the outside corner, so you’re not expecting it to be that high.

That’s just Bronson’s BP fastball. It’s only about 83. And it’s just floating in there. Framing pitches at the top of the zone, you want to be a lot more subtle, because you’re right in the umpire’s eye right there. So if you move your glove all around and really try to do any of that [makes exaggerated glove movement], it’s right in his face. You’re just going to look like you’re trying to get pitches. If it’s a strike, it’s a strike. You don’t need to do anything. And that’s a strike.

Is it easier to get yourself in a position to frame a pitch when it’s going that fast as opposed to [Aroldis] Chapman speed?

Oh yeah. It’s all about getting yourself in the right position. And it really just depends on the pitch.

It seems like you flash the target first, before the pitch, and then …

And you do that regardless of the pitcher?

No, some guys I’ll just hold it there and won’t move it. But you really want to relax. I was always taught to relax just a little bit, because that allows you to adjust to where the ball is.

Do you take any pride or pleasure in the reactions, seeing a guy drop the bat or go back to the dugout muttering?

Yeah. I mean, I don’t necessarily think, “I got that call.” I think it can matter the way you catch the ball, definitely.

That one I really pulled back. I didn’t expect at all for him to call it. I yanked it back up, and I got a call. If I had caught it like this [orients hand to point down again], down here, instead of that way, I don’t get the call. That’s what that’s all about. I don’t really expect to get calls like that very often, but when it works out, it works out. But like I said, I stayed with it, and I kind of stuck it.

If you’re just seeing a guy for the first time, how quickly do you get a sense of how his receiving skills are?

You can tell pretty quick. And you can tell with certain pitchers. It’s all about who’s throwing. Some guys are nastier than others, and you can tell when they’re really just battling to catch the ball, or whether they’re able to work the right pitches the right way. Most guys do a pretty good job, if you’re a big league catcher, but some are definitely better than others.

Do you feel like an umpire tends to use your body as a frame of reference? So if you’re moving outside, it doesn’t look as far outside?

Absolutely. It doesn’t look as far. Anything you can catch in the middle of your body looks more like a strike to an umpire, for some reason. I used to have a problem with umpires when I first got up, because they weren’t used to a catcher that doesn’t set up on the plate all the time. And I’m like, “Look, I don’t want him to throw a strike here.” And they’re all about “Throw as many strikes as you can,” because they’re umpires. But I’m like, “No, I don’t want a strike. I want him to throw a ball.” It’s a purpose, and they’re not used to that.

Runners on again. This is one where you come up almost throwing, but you get the strike anyway.

Are you thinking about the strike there?

Oh yeah. At the same time, I was going to pick off, but Joey didn’t break, or whoever was playing first, we didn’t get the sign right. So I had to hold up. I go staggered when I catch and throw a lot of times. I’ll move in the middle of the pitch to set the angle a little better.

This is Leake. That was a nice one. Because that could’ve been called a ball. My glove, as soon as I caught it, I turned up, right … there. My glove never went even an inch further, as soon as it hit my glove. That’s something you have to time. It’s timing.

How do you improve that timing? Is it just catching thousands of pitches? Are there drills that you did, or particular coaches you worked with who taught you how to do that? Or is it just a natural thing that some guys have?

It’s my trade, so I’ve done thousands and thousands of drills for doing things the right way. But it’s not like I practice this. I don’t practice framing anymore. I mean, I’ll do hands drills, to work on picking. But at this point, this is just like riding a bike. It is what it is. I don’t know how else to say it. I’ve practiced it many times, many thousands of times in the past, with tennis balls, rapid fire, and just trying to do all kinds of stuff. But I don’t think about it.

Do you feel like certain catchers put more of an emphasis on improving that skill than others?

Yeah. I think it’s a big problem when the catcher’s not very good. I’ve been around some guys that aren’t, and it … I mean, if you give away strikes, you’re in such a big hole. Every single pitch, I want my guys to have a purpose, whether we’re trying to throw a ball or a strike, or whatever we’re doing. If you start wasting pitches, you’re just giving the advantage over. Every pitch, the hitter gets more of an advantage. So every pitch has to be purposeful. If you’re giving away calls, that’s not OK. It’s going to screw you real fast.

In the last few years, people have been studying this with PITCHf/x, and they’ve tried to put numbers on it, and the numbers are really big. Because there are just hundreds of borderline pitches like this in a year, and if you’re a guy who gets a lot more of them called strikes than someone else, that adds up to runs and wins over the course of a season.

No doubt. That’s how I always see it.

It seems like people are able to quantify it, more than they used to be able to, at least. And so I wonder whether it’s going to be something that’s emphasized more.

Yeah. I mean, I think it’s always been emphasized. I think this aspect of the game, as a catcher in the minor leagues and coming up, has always been emphasized. You have to receive the ball the right way. If you’re blowing strikes, that’s not going to be acceptable to big league pitchers. If they throw strikes, they expect them to be caught the right way.

But I don’t know how quantifiable it is, because there are so many factors that go into it, in terms of, just, if you’re a veteran catcher or you’re a veteran pitcher, how much respect the umpires have for you.

Do you feel like getting along with the umpire plays a part in it?

I don’t want to try and make this conversation about manipulating umpires. Because they’re going to miss some. It’s just part of the game. It’s impossible not to. But I am trying to give them the best look, and I am trying to see where their zone is, and I am trying to see what we can get. If I feel like we’re not getting fair calls, then I’ll — I don’t ever try and attack them. They’re like the cops, man, they’ve got all the pull. What are you going to do? But I will tell them.

Some guys are different. You can talk to guys different ways. Some umpires will ask you. Because they know I’ll be honest with them if I think it was a strike or a ball. I have enough confidence with our pitchers that I’m not trying to bullshit. I know our pitchers, what they can do. And I’m fine with it as long as they’re getting fair calls. We’ll be OK. I guess some catchers, from what I’ve heard, or what guys try and do, they try and do all kinds of stuff to work umpires. But you’re playing a tough game doing that. These guys have been around. They’re going to pick up on that pretty quick.