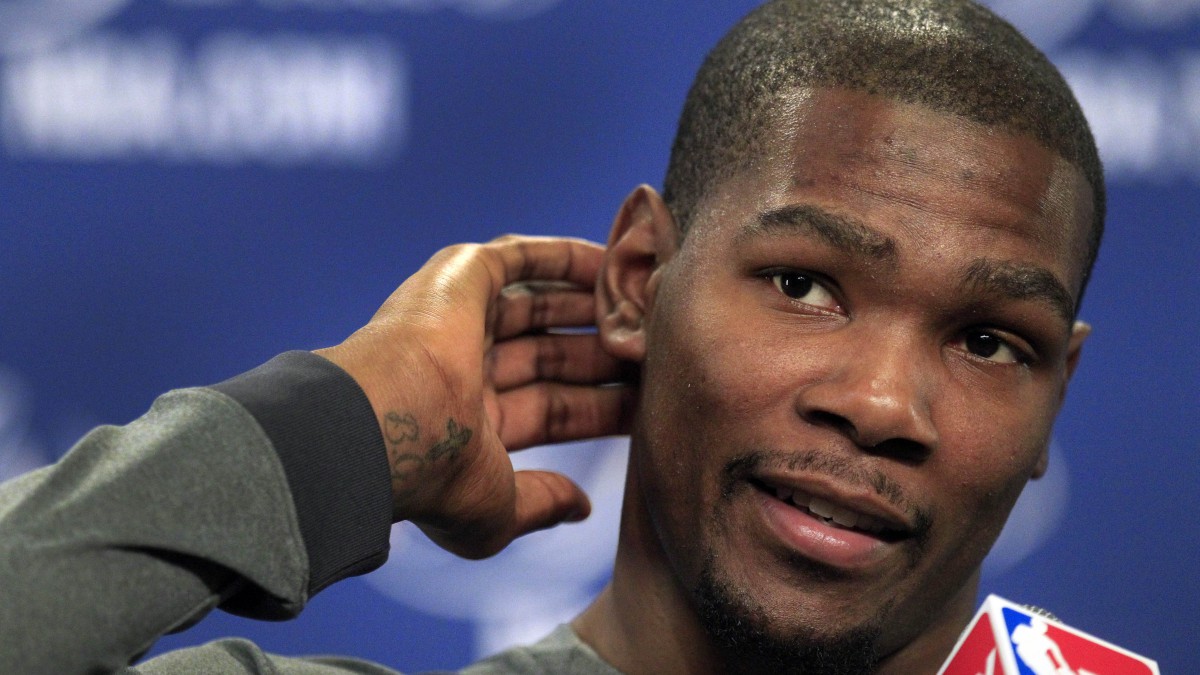 You’re goddamn right we’re going to talk about the scooter.

Maybe you know which scooter I mean. Maybe you don’t, because you live in the South of France and spend your days driving a speedboat while laughing a devil-may-care laugh, in which case bully for you, Tony Parker. I do not drive a speedboat, and since the news came down about Kevin Durant’s foot injury, I never want to laugh again.

This is the scooter I’m talking about: 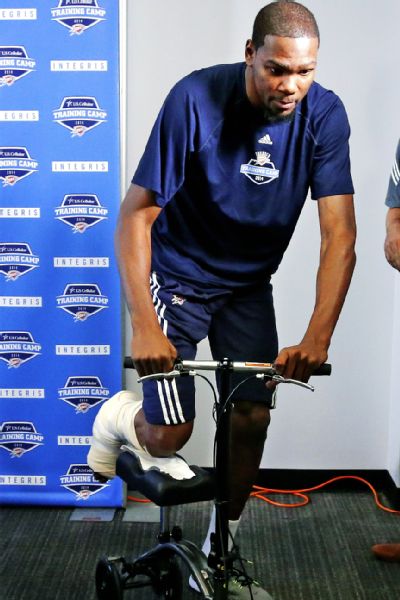 You know. This guy right here:

It’s the saddest little scooter in the world; that’s clear. This is not a scooter of jubilant playfulness, like the scooter piloted by OKC rookie Mitch McGary in his fun KD co-photo-op. This is a scooter of making the best of a tough situation, of gamely struggling against life’s crooked odds. This is a scooter that says you are broken and slightly ridiculous. It’s a scooter of mortality, not triumph. Drake would rap about feeling like this scooter. He would not sit courtside wearing its cap.

It’s — and I can’t believe I’m about to write this; this is Kevin Durant we’re talking about here — it’s a scooter of actual scooting.

Everything you need to know about the coming season.
This, if you don’t know, is the scooter that carried KD to his post-surgery press conference for my beloved Oklahoma City Thunder earlier this week. As media Q&A’s go, the press conference was fairly benign — Jones fracture, surgery went well, taking it slow, team will be fine, validate your parking at the gift shop. There was a Nick Saban joke, I think, at one point. I don’t really know, because the instant I saw the scooter, I stopped viewing the press conference as an exchange of information and started viewing it as the harbinger of my own fiery nightmares. For a second, my brain did that thing where it could only think in memes. I tumbled (Tumblred?) from this: 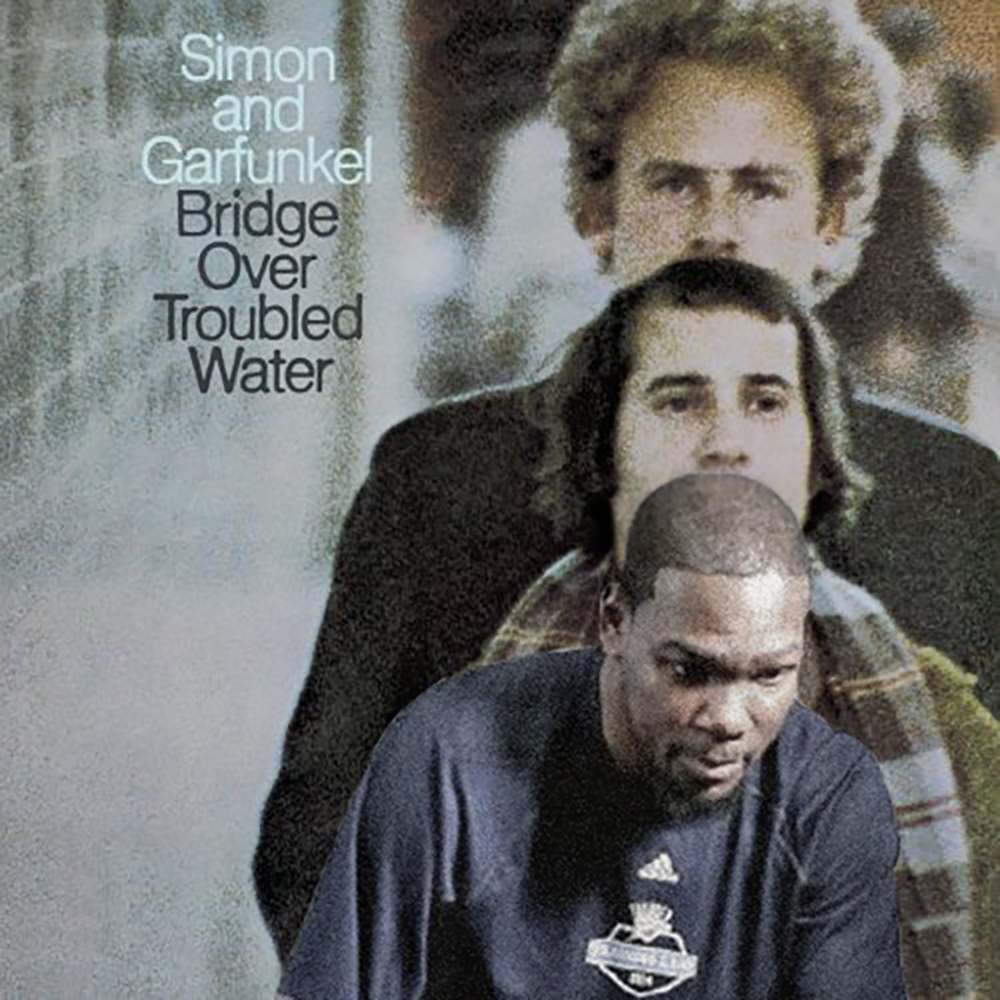 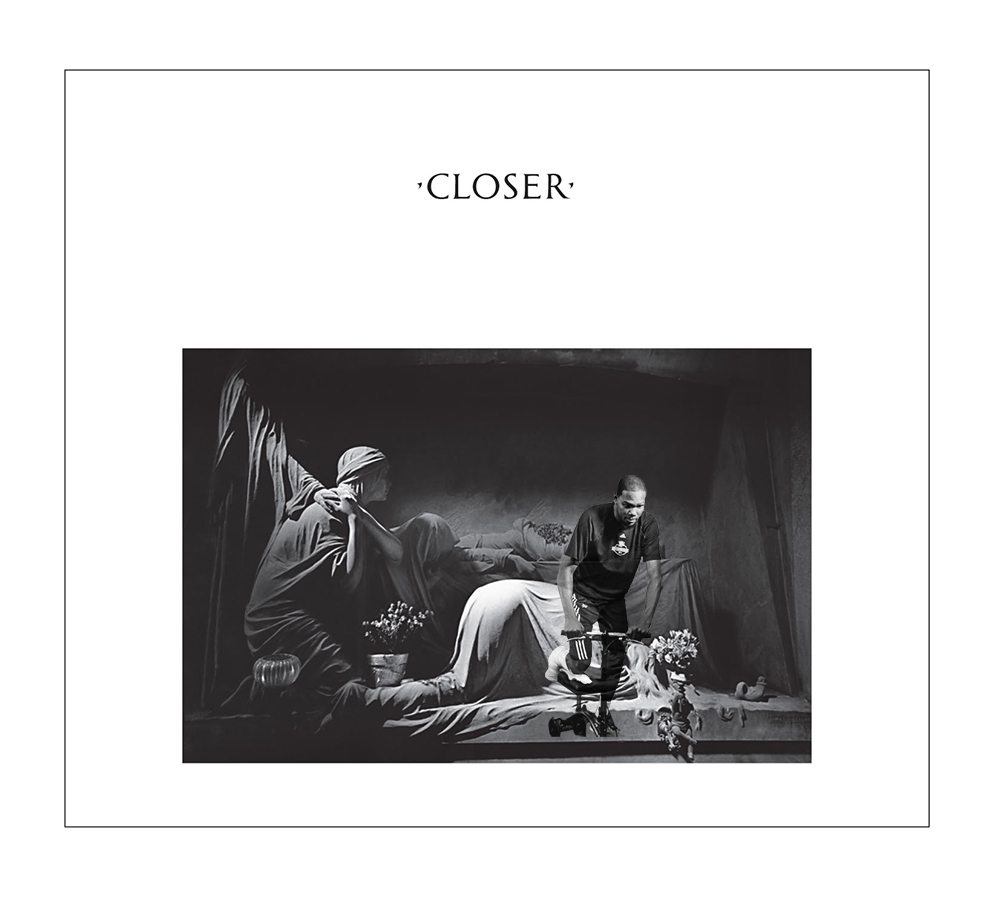 You can know that your favorite athlete is injured. You can understand that he’s not going to play again for months. But until you see his injury expressed in scooter form — scooting, the most demeaning branch of mobility! — you will never truly understand what it means.

There’s a chance, and not even a particularly small chance, that the Thunder will be fine without Durant, at least for a little while. They’ll have Russell Westbrook attacking the basket like the sideways geyser he is, and playing Westbrook without KD has sometimes pushed Thunder coach Scott Brooks into fielding more adventurous rotations. Last year, Westbrook’s own injury trouble meant that he almost never took the court without Durant. But two years ago, as Grantland’s Zach Lowe has pointed out, Westbrook played 280 minutes as the Thunder’s lone superstar, and the team killed — plus-9.5 points per 100 possessions over their opponents. This was at least partly because without Durant, Brooks had no choice but to look for something more balanced than the “two flamethrowers and, uh, I guess some defense” tactics that the Thunder have become known for.

Brooks is a funny coach, one who values improvisation while still having deeply cautious fallback instincts; he’s like a free-jazz Richard Nixon. You sometimes feel like he’s fighting a mighty inner urge to send out a starting five made up of Durant, Westbrook, and three clones of Kendrick Perkins.1 With no Durant to cover for the secret shame of his turtling, Brooks will have to close his eyes occasionally and play Westbrook, Reggie Jackson, and Steven Adams all at the same time. The Thunder won’t win the West just by being canny about replacing Thabo Sefolosha’s minutes, but canniness should see them through Thanksgiving. Immediate collapse is not exactly what I’m worried about here.

What I’m worried about, I guess, is that this could be a preview. OKC has never been without Kevin Durant for an extended period — never, not since the franchise moved from Seattle in 2008. For a player who, especially early in his career, trended toward the willowy end of the superhero-body-frame spectrum, he’s been astoundingly durable. But he hits free agency in less than two years. LeBron just moved back to Cleveland. There are non-crazy scenarios that would see Durant giving up Oklahoma City’s vibrant culture and exciting nightlife for a less appealing coastal city. He could, for instance, go back home to Washington, D.C., his personal Cleveland. So the next two months of making do and juggling role players and hoping Westbrook doesn’t explode until he’s safely out to sea could be our first look at the Thunder’s future. Worse still? It could help create that future.

Now, bear with me here, because I’m about to get hilariously paranoid. But from the square we’re currently standing on, does it really take that many more bad rolls of the dice to end up someplace very bad for the Thunder? Say KD doesn’t recover as fast as he’s supposed to. Jones fractures — a break in the metatarsal behind the little toe — are a little trickier than some other types of foot injury, because the area where the fracture occurs receives a very small blood supply, limiting healing. If Durant is slower coming back than we (sort of optimistically) currently expect, what does that do to the Thunder’s postseason hopes? It’s not as though OKC’s management, which has a famously non-spendy relationship with money, is going to solve this with bold personnel moves. And say the season turns out to be disappointing or even wasted. Durant has had a charmed career in almost every way. But there’s been a lingering sense in some quarters that the Thunder are too small a franchise to win a championship. Doesn’t a setback season this year just underscore the idea that they’ll never get him enough help? Doesn’t he start to think a little more seriously about leaving at that point?

There’s also — as always — the Russell Westbrook factor to consider. The relationship between Durant and Westbrook has never been as tenuous as Westbrook’s critics like to think.2 Still, though — Russ is a delicate mixture. It’s going to be fun to watch the full-court photon-torpedoing that a let-loose Westbrook lays on his opponents. I don’t care how defenses crowd the lane; I’m expecting a lot of dunks that the word “tomahawk” will describe only if it means the cruise missile and not the hatchet.

But Westbrook has never, in his entire NBA career, had alpha-star status on his team. He has never played without Durant for months at a time. Shouldn’t we expect this experience to affect a player as combustible as he is? What if he loves it? What if he’s not very good and it shakes his confidence? What if he learns what memes are? This is uncharted territory, and you never know what Russ is going to do even in very, very charted territory. That’s the beauty of Russ. He could win the MVP; he could be on an Australian walkabout in four months. We have no idea. He could release a country album. I’ll be a little surprised if he doesn’t.

My point isn’t that any of this stuff is going to happen. It probably won’t!3 My point is that the Thunder team we’ve known for the last few years is a mechanism that works largely because Kevin Durant’s presence has so much regulating force. Take that away, and suddenly predicting the future isn’t as simple as circling the day on the calendar when he comes back.

OKC is still such a new team that every new development is likely to be the fan base’s first experience of whatever that development is. We’ve been to our first Finals, we’ve lost our first major star in a trade; now we get to cope with our defining player’s first major injury.4 We haven’t yet seen the team undergo a major shift in character, but it will happen — if not now, if not in two years, then eventually. Nothing lasts forever in sports, or even for very long. That may be why it’s so easy to imagine this week that we’re rolling, rolling on our tiny, comical scooters, toward the end.