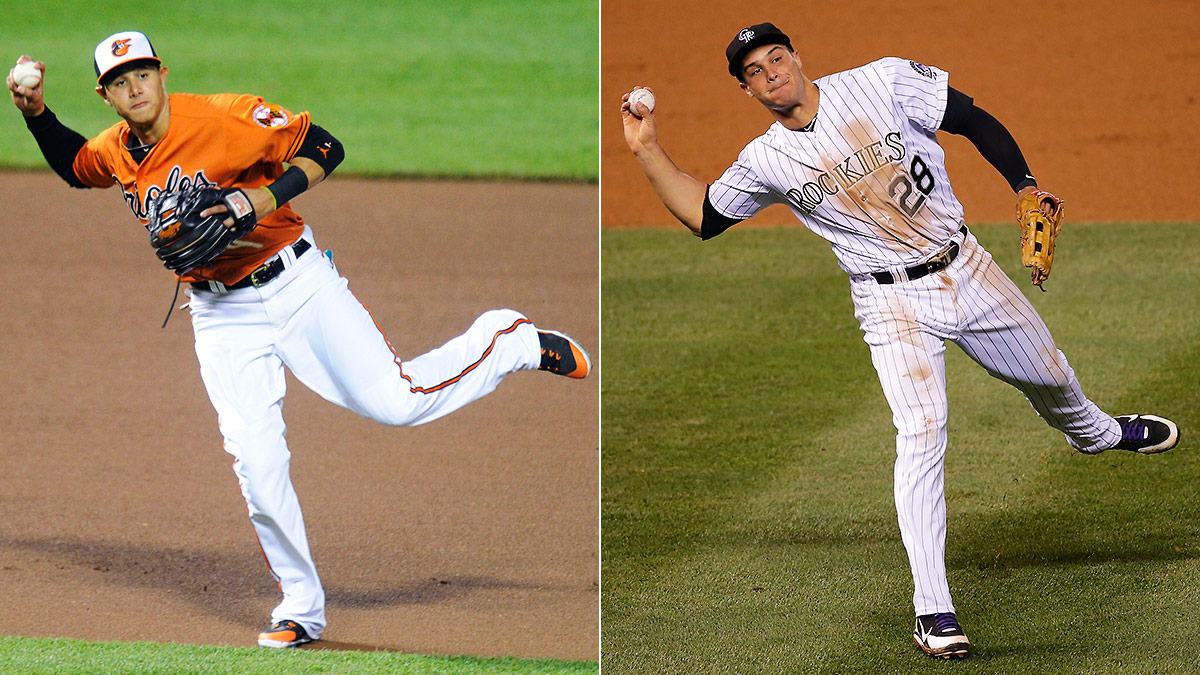 White Sox starter Chris Sale has struck out more than 45 percent of the batters he’s faced in June, a higher rate than any reliever with at least 20 innings pitched has recorded over the full season. Marlins specimen Giancarlo Stanton, who’s hit his batted balls 3.5 mph harder, on average, than any other hitter this year (minimum 100 pitches in play),1 slugged .800 with 12 homers in June before breaking his hamate bone with a swing that hurt him instead of a baseball. With one day to play, Sale and Stanton are this month’s major league leaders in FanGraphs’s Wins Above Replacement.

Close behind Sale and Stanton are two players with less freakish physiques but no less impressive skill sets: the Orioles’ Manny Machado and the Rockies’ Nolan Arenado, with 1.9 and 1.6 June WAR, respectively. Both are third basemen in the front half of their twenties. Both have great gloves and rapidly improved power that’s put them on pace for career years. Both have last names that end in “-ado.” All of these qualities make them perfect fits for Who Ya Got, the series where we perversely insist on making impossible choices between two superstars instead of simply celebrating the fact that they both exist.

WAR is no help here: Machado and Arenado have identical WAR values at Baseball-Reference, with two-tenths of a win between them at FanGraphs. Machado has been slightly better on offense, with a 146 wRC+ to Arenado’s 137, after adjusting for the players’ respective parks and leagues, and he has a playing-time lead of two games and a little more than 20 plate appearances (partly because Machado has led off for most of the season, while Arenado has most often hit fifth). Arenado has been better on defense, nearly doubling Machado’s DRS and UZR scores. According to Baseball Prospectus’s Baserunning Runs, neither player has added or subtracted even one run with his legs. Machado has been successful on 11 of 13 steal attempts this season, while Arenado has yet to swipe a bag. But Machado’s two times caught have come with no outs (which is especially costly), and he hasn’t done a great job of taking extra bases on batted balls.

We could give the edge to Machado because offensive production and playing-time totals — the areas in which he holds slight leads — reflect reality more reliably in small samples than defensive stats do. On the other hand, Arenado has faced better pitchers, judging solely by this season’s results: Out of 326 hitters with at least 100 plate appearances, Arenado has faced the 87th-best group of pitchers, while Machado’s opposing pitchers rank 204th. He’s also seen a less favorable assortment of umpires and catchers, according to BP’s Called Strikes Above Average.

This competition is so close that we could call it based on clutchness, even though in half a season that’s more a function of timing and opportunity than inner strength. Arenado’s hits have been better timed, resulting in a higher Win Probability Added. If we’re considering that kind of context, though, we should also factor in that Machado is playing for a team that’s tied for first place, while Arenado’s Rockies are realistically out of the race, theoretically removing some pressure. Or maybe making it harder to stay motivated! It’s easy to spin this one way or another if you have a horse in the race.

In summary, our instruments aren’t precise enough to measure the value difference. Captain Kirk could’ve used this question to destroy a robot.

Machado, who’ll turn 23 next week, has the age advantage over Arenado, who turned 24 in April. Machado, a third-overall draft pick and a former top-10 prospect, also debuted in the big leagues a year earlier than Arenado, a second-rounder who ranked outside the top 50 in his last appearance on prospect lists. Machado had one of the top-10 age-20 seasons of all time in 2013, when Arenado was one of the worst qualified batters in baseball. At every stage of their careers, Machado has had greater expectations. Only in the last year has Arenado virtually erased the gap.

Neither player is winning any ironman awards for his work. Machado has suffered the more serious injuries, undergoing surgeries on his left and right knees to repair injuries sustained in September 2013 and August 2014, respectively. Arenado, meanwhile, missed 50 days last season with a fractured finger and early-onset pneumonia. The knee surgeries at an early age are obviously scarier, raising the specter of some congenital predisposition toward weakness in an area that’s of vital importance to players, which would affect Machado’s long-term outlook.2 For now, though, the games played and stolen-base attempts in 2015 say Machado’s feeling fine.

Who’s Made the Most Progress This Year?

Like almost every other category, this one will be close. There’s nothing fluky about either player’s production: Their BABIPs are well within (or even below) their expected ranges, and they’ve hit the ball hard. Out of 197 hitters with at least 100 batted balls for which we have Statcast info, Machado’s 92.4 mph average exit speed ranks 17th, topping Arenado’s 91.3, which ranks 34th. In less than half a season, both players have set career highs in home runs. Last year, 16 of Arenado’s 18 homers came at home, leaving him open to “product of Coors” accusations. This year, he’s hit 15 of his 24 bombs on the road, and all of his power stats show a clear positive progression.

The big difference for Arenado this season has been a newfound ability to hammer breaking balls, which for the first time he’s actually hit harder than fastballs. And he’s done so without any notable breakdown in plate discipline, which isn’t a strong suit but also isn’t a problem, since he tends to make contact whenever he swings.

Arenado hasn’t allowed himself to be rushed while preparing to swing. In a season when pace-of-play measures have trimmed more than 10 minutes off the average game time, Arenado’s time between pitches has actually increased by 0.8 seconds, the largest rise among qualified hitters who had at least 300 PA in 2014. Machado’s has decreased by 2.7 seconds, the eighth-largest decline.

Like Arenado, Machado has also upped his power output. But for him, the biggest difference has been an overnight appreciation of the strike zone. Machado’s chase percentage — the percentage of pitches outside the strike zone at which he swings, as tracked by Baseball Prospectus — has dropped by more than 27 percent since last season, the biggest decline among 100-plus players who’ve seen at least 1,000 pitches in both years.

Only four players who’ve met those pitch minimums — Victor Martinez from 2008 to 2009, Nick Swisher and Jonny Gomes from 2010 to 2011, and Brian Dozier from 2012 to 2013 — have sustained a decrease that large over a full season for which we have PITCHf/x data. Machado has stopped swinging at bad pitches, and the quality of his contact has increased accordingly. That’s a tough transition to make, so his offensive overhaul gets the nod over Arenado’s.

Whose Defense Makes Us Do the Most Double Takes?

Arenado was an amateur shortstop; Machado played short right up until he made the majors. Every movement they make says they’re overqualified for a corner. Again, career stats hardly help settle the debate: The two third basemen have the same lifetime fielding percentage, and their DRS and UZR totals per 150 games basically balance out.

Both the Orioles’ and the Rockies’ staffs have allowed especially hard-hit balls to third base, ranking fourth and seventh this season, respectively, so there’s no indication that either player has had it easy. Nor does either have an obvious weakness: Both have been above average on balls hit to their right and their left, as well as those hit directly at them.

If we look at career trajectory, though, we can convince ourselves that Arenado is better today. Over the past season-plus, his defensive stats are superior, and it’s not unreasonable to wonder whether Machado’s knee problems have cost him some fraction of a step. Inside Edge assigns each fielding opportunity one of the following six classifications based on how likely it is to be converted:

Here’s how Machado’s and Arenado’s 2015 completion percentages for plays of each type compare to each other’s, and to the MLB average at third (opportunities are listed in parentheses):

Machado has made a slightly higher percentage of routine chances and a much higher percentage of remote chances, although in the latter case we’re talking about two plays. Arenado more than makes up for those differences with substantial leads in the likely, even, and unlikely categories. He’s the only qualified third baseman who’s converted every likely play this season.

A video is worth an infinite number of statistical tables, so each player’s successful “remote” and “unlikely” plays from this season are plotted on the field diagram below. Mouse over each colored box (orange for Machado, purple for Arenado) to watch the web gems.

Both of these guys are good enough at playing third base to be burned as witches, but Arenado has probably made the more spectacular plays this season, without flubbing the easy ones. If I have to pick — which, sadly, is sort of the point of this post — Arenado earns the rose.

Both Machado’s and Arenado’s value will extend well beyond one ultra-productive month. ESPN analyst Dan Szymborski’s ZiPS projection system sees Machado and Arenado as two of the eight best bets in baseball in terms of projected rest-of-career WAR. If we were to auto-draft all of Major League Baseball by ZiPS, only four non-Machado position players — Mike Trout, Bryce Harper, Yasiel Puig, and Kris Bryant — would be picked before Arenado was off the board.

Machado gets the infinitesimal edge in projected peak season (an average value that either player could easily exceed in any given year). That, combined with his 15-month edge in age, translates to a difference of roughly 7.5 wins, which sounds like a lot but really isn’t, since both of these players can expect to be big leaguers for a very long time.

ZiPS, like any projection system, isn’t all-knowing. The system sees that Machado missed time with leg injuries, but not that the injuries were to his knees, specifically, or that they both required surgery. Maybe that extra info, along with an awareness of the makeup and work ethic that allowed Arenado to overcome early concerns about his maturity and defense, is enough to close the small gap. If Arenado is the player he’s looked like this month — one of baseball’s best power hitters, as well as one of its best defenders — he could eclipse Machado. Either way, he’s about to be better known outside of Denver.

But even if Arenado has equaled Machado this season, he hasn’t quite done enough to change the prevailing belief that Machado will have the more valuable career. The younger player’s pedigree and past success, coupled with his present performance, still make him a higher-probability pick than Arenado, who looks unbeatable because he’s hit eight homers in his last eight games. At some point, the invincibility music that’s accompanied Arenado and Machado all month will subside, but the battle between gold-glove, big-bat third basemen should continue to be one of baseball’s best barstool debates.

Thanks to Keith Isley of Inside Edge, Dan Szymborski, and Nick Wheatley-Schaller for research and graphical assistance.