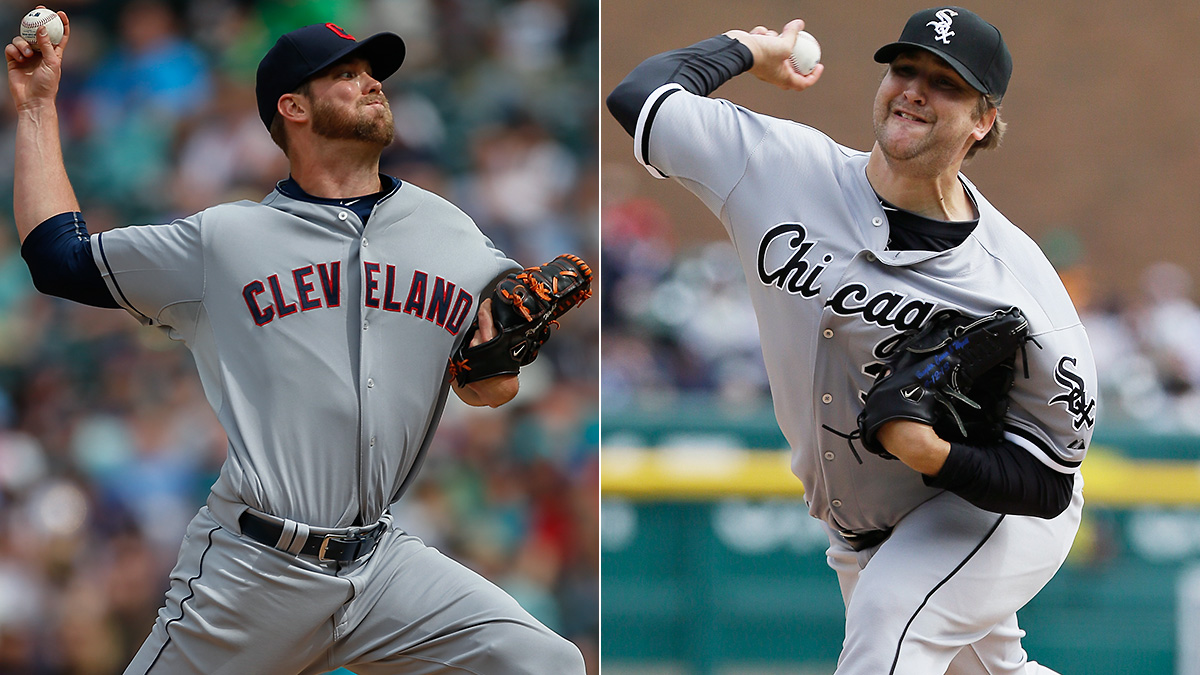 On Sunday in Minnesota, Indians reliever Ryan Webb broke a big league record, and almost no one noticed. It was the same record he’d broken on nine previous occasions this season, as well as on multiple occasions late last year. Webb entered in the eighth on Sunday, down 4-1 with one out and a runner on first, in relief of Zach McAllister, who’d replaced starter Carlos Carrasco and allowed two runs. It took Webb two sinkers to get out of the inning: the first for strike one to Twins catcher Kurt Suzuki, and the second for his signature, a double play, which he’s induced more often this season than any other player with as many innings pitched.1

The Indians didn’t score in the top of the ninth, which meant that Webb was the last Cleveland pitcher. It was the 97th game the big righty had finished during his MLB career. And in that time, he’s never recorded a save.

At no point in baseball history has a pitcher finished nearly as many games as Webb without even one of them resulting in a save. It’s a feat of consistency almost as improbable (if not as impressive) as Energizer Buehrle’s endurance streak. Any pitcher who can overcome the preposterously high hurdles that prevent most hopefuls from ever making a major league bullpen has a decent chance of recording a save: Over the past 10 seasons, 570 relievers have registered one. That’s almost a third of all pitchers who’ve made even a single relief appearance over that span, including slumming starters, moonlighting position players, and September call-ups who never got into another game.

Further, stick in a bullpen for several seasons and a save is virtually guaranteed. Out of 157 pitchers who’ve pitched a minimum of 265 innings over that 10-season span while making at least 90 percent of their appearances out of the pen, only two have gone saveless: Webb, who debuted in 2009, and White Sox reliever Matt Albers, a big leaguer since 2006, who has 86 games finished and held the record until Webb overtook him last year. No other pitcher has ever finished more than 76 games before earning his first save, and the third-place active pitcher, Fernando Abad, trails Albers by 24 games finished.

I wrote that almost no one noticed the new record because in some Internet circles, Webb’s late-inning work was newsworthy. Tipped off by an email from Baseball Prospectus author Matt Trueblood, BP’s Sam Miller and I told a tiny percentage of the world about Webb’s and Albers’s unsexy streak on a March 2014 episode of Effectively Wild, the podcast we cohost. Their dubious distinction struck a chord with our audience, and the pair of low-profile pitchers became cult heroes, on-field avatars for anyone who does a job well without reward or recognition. This spring, the baseball blog Banished to the Pen started a reliever-only fantasy league, dubbed the “Webb-Albers Championship,” in which the goal is to get games finished without accruing saves. “I’ve heard of [the record],” Webb says. “I wasn’t aware it was that in-depth.” Albers says the same, although he understands why their thus-far fruitless quest has captured some imaginations. “It’s one of those fun baseball stats you can look at because there are numbers everywhere in baseball,” he says. “So I think it’s kind of cool.”

Both Webb, 29, and Albers, 32, have been through the wringer this year. Webb started the season with the Orioles, who essentially sold him to the Dodgers for a competitive balance pick. The Dodgers dropped him after a few days, and he signed with the Indians, who’ve used him in every inning from the third through the ninth, in addition to extras. Albers, who signed with the White Sox on the eve of spring training and missed two months with a Royals-inflicted finger fracture, has worked every frame from the fourth through the ninth (and has also seen action in extras).

Without the luxury of planning around a particular point in the game, both pitchers rely on fast-acting liquid pick-me-ups: Albers leans Red Bull, while Webb favors 5-Hour Energy. “What I’ve always done is if the phone rings and I’m asked to warm up, that’s when I’ll take something to get a little blood flow going and take my time getting loose,” Webb says. “Usually it’s like 10 minutes and then you’re in the game. Hopefully it gives it a little bit of time for it to kick in.” If circumstances change and he has to go back to the bench, he’s hopped up for nothing. “I’ve lost a lot of sleep by taking a 5-Hour Energy late in a game and not getting in,” Webb says. It’s hard to imagine more unsettled, and unsettling, seasons. The only constant is the absence of saves.

Non-closers often pick up saves in extra innings, long-relief outings, or games in which the closer isn’t available, so the Webb-Albers streaks could easily have ended any number of times. “I guess I’m surprised that I didn’t throw three innings at the end of a game when we’re winning,” Albers says. Webb sees his seasons with the Marlins — particularly 2011, when he had his only DL stint — as missed opportunities for saves. “A lot of the times in Miami, I was pitching early in the game when I needed to pitch to get out of a situation, and then a guy that might have 20 days in the big leagues is left in the 13th inning when we finally score a run on the road, and gets to get a save,” he says. “That was never me, unfortunately.”

“I’ve been on teams with pretty established closers,” says Albers, who’s blocked by David Robertson in Chicago’s bullpen. “When you have that, the opportunities just aren’t really there.” But there’s also an element of randomness to becoming a closer: In 2007, Albers’s sophomore season, Joe Borowski saved 45 games with a 5.07 ERA. In the wild-card era alone, 17 other relievers have recorded 30-save seasons with park-adjusted ERAs worse than the overall league average (which is higher than the average ERA for relievers alone). Shawn Chacon and Brad Lidge managed 30-save seasons with ERAs over seven. Albers, who bombed as a starter before transitioning to the pen, has a 2.58 ERA in 153.2 innings since 2012 (although his FIP is far higher), and both he and Webb rank among 2015’s top 25 relievers in ground ball rate (minimum 20 IP). Neither is miscast as a middle reliever, but both have had seasons in which they wouldn’t have been bad choices for interim closer roles. “There’s a lot of luck to it, sometimes,” Webb says.

There’s probably also a preference for pitchers who miss more bats. “I do think guys that light up the radar gun turn a little more heads and attention for that role,” says Webb, whose sinker used to sit in the mid-90s when he was typecast as a non-closer while buried in deep Padres bullpens filled with future save-getters. “I’ve only seen a few sinkerballers [get saves].” Albers, who’s never thrown that hard, thinks teams “like [ground ballers] to be able to come in after the starter, to come in with guys on base and be able to go multiple innings as well. So I think that’s maybe kind of kept me in the role where I am.”

In Webb’s opinion, what he does might be even more difficult than pitching the ninth. “I would say that this season in particular, pitching in so many different roles, has been the most difficult to adjust to,” Webb says. “I’m not sure a lot of guys can actually do that.” Although he hasn’t walked an inning in a closer’s spikes, Webb has pitched in plenty of similarly pressure-packed non-save situations, and he doesn’t believe in the so-called “closer mentality.” “There’s not one guy in the big leagues that shouldn’t be able to go out and get three outs for an inning,” he says.

When I asked how he would evaluate a reliever, if not via saves, Webb invoked the common player complaint about people who haven’t played pro ball making up stats, reserving his greatest ire for FIP (which may or may not be because his FIP is currently a run and a half higher than his ERA). But the best example of a misguided, made-up-by-a-sportswriter stat isn’t FIP, WAR, or one of the many other metrics with acronyms that incurious columnists deploy as weak punch lines. It’s the save. “SV” might not be as mockable, but no sabermetric stat is as arbitrarily defined, and few have done as much to dictate the way rosters are structured and players are paid. “There are a lot of happy closers that have gotten nice contracts because of that stat,” Webb says.

If either Webb or Albers eventually receives his first ninth-inning save opportunity, don’t expect to see somersaults, stomps, or archery. “Every once in a while I give a little fist pump when I’m pretty excited, so maybe just like a little fist pump here or there,” Albers says. “But nothing too over-the-top.” Webb is at least open to the idea of deviating from his customary handshake in his inaugural save celebration. “I assume it would be a lot like my other outings,” he says. “I’ll start giving it some thought. I might have to step off the rubber for that last out to think about what it is I’m going to do.”

Saves are silly, but they have some cachet, so there’s still something poignant about two pitchers always being the bullpen’s bridesmaids as fresher arms catch the bouquets. Three relievers — Kyuji Fujikawa, Dale Thayer, and the immortal Emiliano Fruto, who pitched 23 games in 2006 and finished his brief big league career with a 5.50 ERA — have recorded saves in their MLB debuts since Albers entered the league. This April, 20-year-old Blue Jays reliever Miguel Castro, who went straight from High-A to Toronto, earned a save in his third career game. “I watched [Indians reliever] Austin Adams come up and get a save in [his] fourth outing this year,” Webb says. “I was joking with him after the game — ‘It’s that easy, huh?’”

As their games-finished totals climb toward triple digits, neither reliever is losing sleep over his lack of saves, and they’re probably paying less attention to their prospects than the guy who drafted both of them in the games-finished fantasy league. But that doesn’t mean they wouldn’t prefer to be on the board. “I’d like to get one,” Albers says. “I mean, yeah, might as well.”