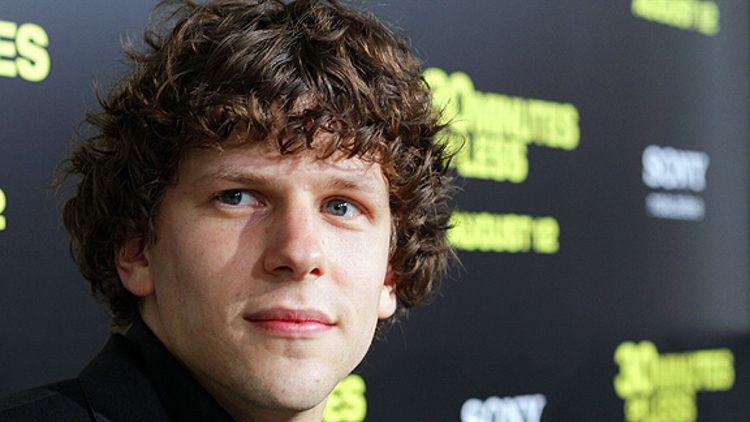 Of his many less-than-Mensa starring roles actor Laurence Tureaud — whose successful career has spanned decades — once said “it takes a smart guy to play dumb.” And history bears him out. Moe Howard, the most senior of the Three Stooges, enjoyed relaxing with some Horatio Alger. Henry Winkler, beloved by millions for jumping over sharks in a leather jacket, was, in reality, a shy Yale MFA grad. And frequent Razzie nominee Jim Varney, of Ernest Goes to Camp infamy, grew up reciting poetry and went to his unfortunately early grave writing screenplays and dreaming of playing Hamlet.

All of which would seem to augur well for Jesse Eisenberg, the heady young thespian, who today follows up his Oscar-recognized turn as one of the slyest, savviest characters of the young millennium by playing one of the stupidest: a stoner pizza-delivery guy who gets outsmarted by Danny McBride in 30 Minutes of Less. Eisenberg clearly has the requisite high IQ to play to the lowest common denominator: the son of a Sociology professor and a birthday party clown (!), he made his Broadway debut the same year he was Bar Mitzvahed and turned down a spot at NYU to focus on film work. One could imagine a Kevin Kline-like career for Eisenberg — a clever craftsman able to go from Sophie’s Choice to eating an entire tank of goldfish as the wildly dim Otto in A Fish Called Wanda. And yet in 30 Minutes or Less — which is looking like a bigger bomb than the one Eisenberg’s would-be bank robber is forced to wear in it — Eisenberg is getting the wrong kind of attention for apparently being too smart to play stupid. “Although Mr. Eisenberg radiates natural intelligence even when his motor mouth is running on empty dialogue, his character is a grade-A moron,” tut-tuts Manohla Dargis in the Times. Roger Ebert is more succinct: “It is impossible to believe him as a character as dumb as Nick.” What happened here? If everyone from trained chemical engineer Dolph Lundgren to Lupe Fiasco can convincingly dumb it down, why not Jesse Eisenberg?

It’s not as if comedy was the problem. Eisenberg’s cerebral stammer has been mined for LOLs in nearly all of his major roles, perhaps most memorably in Zombieland as a shotgun-packing slacker more concerned with the end of his virginity than the end of the world. But even that performance was, in essence, about the humorous gaps in Eisenberg’s undeniable intelligence: a lifetime of videogames had taught “Columbus” how to navigate a flesh-eating apocalypse but not the intricacies of a first kiss. This book-smart/socially dense divide has been at the heart of every Eisenberg performance all the way back to his first, in 1999’s Rodger Dodger where, as a high school mathlete, he learned to drop the backpack and pick up the tab for older women at Manhattan cocktail bars thanks to the misogynistic tutelage of Campbell Scott. In the very underrated Adventureland, Eisenberg shined as an overachiever forced to stew away a summer surrounded by his lessers — the jokes, and surprising emotional tension, coming from the fact that he knows he’s a better match for a pre-vampire-bite Kristen Stewart than Ryan Reynolds. He’s just incapable of making the case. As James Brennan, Eisenberg is venal, clueless, horny, confused, sputtering and, occasionally hopeless. But you could never see him getting anything less than 1400 on his PSATs, let alone finding himself at the mercy of this guy.

But in Hollywood these days, Eisenberg’s natural, genial awkwardness is about as valuable a skill as changing typewriter ribbons. All bros and no brains, the current grody age of R-rated comedies is fueled by a steady stream of profane patter (which Eisenberg can do) and vomit (which he probably shouldn’t). There’s too much natural Zuckerbergian frost to Eisenberg’s schtick to ever believe him waking up with a face-tattoo or finding himself on the receiving end of an incontinent baby — an Eisenberg character would wake up screaming at the first touch of the needle in the former scenario and definitely find a way to duck in the second. Eisenberg — like elder amusing eggheads Albert Brooks or Jeff Goldblum — is much better served when he’s standing above the muck, archly complaining about it, rather than actually diving in. (Of course seeing him get pushed in would be another story entirely.)

No, it takes a very special skill set to be able to plausibly hang Picassos on your wall in reality and put an arrow through your head in performance. So it’s a relief that after this one ill-advised detour into the mainstream trough (more Manohla on 30 Minutes: “rude and crude … the bottom of the barrel!”) Eisenberg ran immediately into the protective, similarly scrawny arms of Woody Allen, another fast-talking performer who couldn’t stop the savvy self-analysis, even when wearing a colander on his head. Luckily, Eisenberg has plenty of other actorly abilities to hide his mentally-deficient deficiencies — he’ll soon get to work playing a “baby-faced counter-terrorism expert” in the definitely not-at-all-funny The Terrorist Search Engine. But it’s worth remembering, even as we all collectively forget about 30 Minutes or Less, that playing simple-minded can be awfully complicated. It brings to mind another, more famous — though entirely wrong-headed — quote from the aforementioned Tureaud: “I pity the fool.”

No, Mr. T. We shouldn’t pity the fools. We should applaud them!