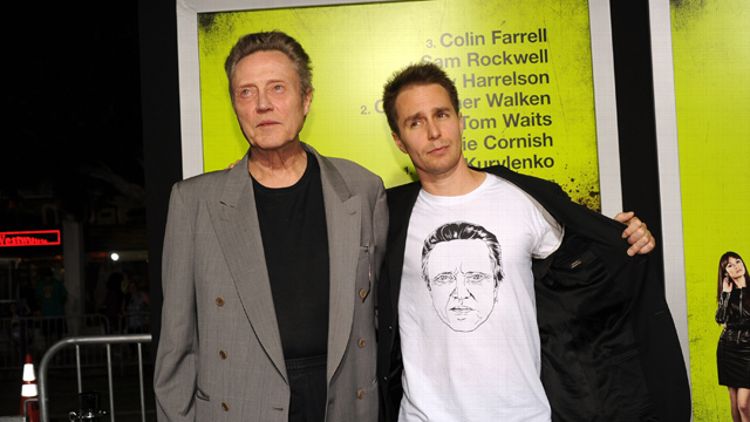 Last week, Christopher Walken and Sam Rockwell were stashed in a top-floor suite of the Beverly Hills Four Seasons while on a promotional jag for their new movie and second collaboration with each other and writer/director Martin McDonagh, Seven Psychopaths. (The first was a 2010 run on Broadway with A Behanding in Spokane.) Your humble correspondent was given a scant 10 minutes alone with the pair, ostensibly to talk about the movie, a strange and sensationalist exploration of psychosis, megaviolence, and puppy love co-starring fellow wackjobs Tom Waits, Colin Farrell, and Woody Harrelson. But Walken (serene and clad in black warm-up pants and a T-shirt) and Rockwell (hyperactive in jeans and availing himself of the PR team’s free yogurt) clearly enjoy each other’s company and did their best to make their own conversation.

Sam Rockwell: Actually, I’m over at the Chateau Marmont.

Christopher Walken: He’s over there with —

The wilder life! So, it’s more sedate around here?

Rockwell: I’ve been trying to talk him into going over there. But he wants to stay here ’cause he’s close to the junket. And he likes boring, so …

Walken: Not only that, I heard about that big traffic nightmare you’ve got.

Rockwell: When they closed the 405? That was only this weekend. It’s done.

[Walken turns to me expectantly.]

I just came from New York! I have no idea.

Walken: Oh, there’s some big — they call it Carmageddon!

Oh, I heard about this. “Carmageddon 2,” the sequel, right? They’re always better than the original.

Rockwell: Yeah! But it’s just the weekend, right? I think it’s done. I think you should come to the Chateau, Chris.

So the two of you met while working on Martin’s play. Were you eager to work together again?

Rockwell: We had a really good time.

[Walken notices that Rockwell has spilled a fat glob of yogurt on the Four Seasons carpet.]

Walken: Look what you did! Come on, man!

Walken: Yeah, that is.

Rockwell: I’m at the Chateau! That’s how we do things!

Walken: [Disappointed.] That’s so typical Chateau. And look what you did on the coffee table!

Oh, boy. This is embarrassing.

Walken: No, no. Look at it. It’s just so typical Chateau.

It’s always obvious when someone’s been staying at the Chateau.

Rockwell: Yeah, right? “You trash from the Chateau, coming over here to the Four Seasons, dropping yogurt all over the floor.”

Feel free to take a moment to get your bearings.

Walken: Yeah. Have some respect over here in the old-folks home. [To me.] It’s an expensive day-care type of thing.

What’s it like going from working together onstage to a movie? Because I figure on Broadway, you get to go home after a good night’s work. On set, there’s nowhere to escape.

Click here for all of our interviews with fascinating people from the worlds of sports and pop culture.
Walken: Well, in the theater you rehearse for a minimum of five to six weeks. And then you get to play it. Which means you get to get better. That’s the great thing about the theater. Usually in the first performances I’m completely panicked. And I pull myself together. By the time you get to the end of the play, you really start to have fun. [To Rockwell.] Huh?

Walken: In movies, of course, that process is all condensed. In the theater you rehearse in order to do the performance. And in the movies the rehearsal and the performance are kind of the same thing. You’re figuring it out and hopefully the camera is pointed at you when you’re doing it.

Walken: It happens on film if you’re lucky.

Rockwell: In the theater you do it in rehearsal and you’re constantly trying to get back to that discovery or —

Walken: In rehearsal you have a good accident that you can repeat.

Walken: In the movies if you have a good accident you hope the camera’s running.

Particularly, in the case of Seven Psychopaths, I’d imagine you hope the good accident doesn’t occur when someone else’s head is exploding and there isn’t enough money in the budget to film it again.

Walken: I don’t know how they did that. It is a funny moment! It’s the first thing I noticed. The first time I saw the movie I saw it by myself, and when [ACTOR’S NAME REDACTED]’s head exploded, it just made me laugh.

Both of you have had ample opportunities to play character roles — Sam, in an interview you once called them “oddballs.” But this is a film with only oddballs and no straight man to bounce off of. Did that affect the choices you made?

Rockwell: Colin would say he’s the straight man. I don’t think he is. But he would definitely be the candidate, right? But he’s a weirdo, too, in the movie. Sorry, what’s the question?

Well, Martin is clearly wrestling with something in the script, his tendency toward sensationalism and violence versus a desire to deal with more serious feelings. But as actors you have to play that conflict too. Chris, your character does some strange stuff, but also has a very tender relationship with his wife.

Walken: For me, it would be counterproductive — is that it? — to think of myself as a type. You just try to play the scene, talk to the other person — it’s really for other people to put it together. You just try to be as convincing as possible. I always thought that if I wasn’t an actor and I was in the movies — I don’t think I’d be a good director because people would ask me, you know, “What is it? What’s going on here? Where should I put the camera?” Or, “What’s my motivation?” And I would say, “Do whatever you want!” And that’s probably not a good thing to be a director.

Walken: But I think I could have been an editor. I think that would have been very interesting. To have all that film and think [claps and rubs hands] oh man, I’m gonna put this over here and switch that scene … Like a painter, you know? They do all that stuff and it’s really magic.

That sounds like the way you were describing rehearsal. It’s a chance to keep playing.

Walken: Yes! But if you’re an editor you’ve got all this stuff. You’ve got all the actors. And you say, wouldn’t it be perfect if he had a certain line here, it’s not in the movie. But when he’s off camera here you’ll hear him say, uh [thinks] “I love you. Will you lend me some money?”

Walken: You know. You do that in post-production. To me that’s one of the grooviest things about making movies.

Rockwell: Yeah. That’s well said. An editor is like a painter. There is a magic in that.

Sam, your character has even broader notes to play in this film and has to do some pretty wild things. But underneath it all is a very simple desire to help his friend write a screenplay. How do you strike that balance?

Rockwell: Well, you gotta try and keep it real. And sometimes you don’t always achieve that. I’ve definitely been guilty of gilding the lily — you know the Shmactor Police will come and arrest you.

Do you keep them on set just in case?

Rockwell: I try and stay away from them. They find me. I’ve been in jail a couple times. But you do the best you can —I think, again, with comedy you want to keep the stakes really high and play it real.

Walken: With comedy, of course, it helps if you’re funny.

Rockwell: That makes me feel funny. You know, as they say, “a bird in the hand feels funny.”

Is that an old actor’s crutch, lunch meat in the loafers?

Rockwell: It’s an old Steve Martin joke, I think. “Hey, Steve? How can you be so fucking funny?” “Well, I like to put bologna in my shoes before I go onstage.”

Walken: Well, you know, there’s something to that! You are funny if you feel funny.

Walken: Of course, the last thing you want to think about is being funny. But some people are funny!

Rockwell: Some people are funny! And some people, their tragedy is funny. Like Gene Wilder. His tragedy is fucking hilarious, right?

Rockwell: But you watch Meryl Streep’s tragedy and it makes you cry. But Gene Wilder’s makes you laugh.

Walken: I did a Funny or Die video with Richard Belzer and I spent the day with him. And the guy is just hilarious. I don’t know! You know? Stitches.

Rockwell: Isn’t he friends with Joe Pesci, too?

Walken: Well, they know each other.

Rockwell: I feel like you and Joe Pesci would be a fun combo. I could see that.

[A publicist knocks to say there’s one minute left.]

OK, since I just arrived from New York I had to ask this question: In most movies, Los Angeles is shot like any other town. But in Seven Psychopaths that insanely bright sunlight is both extremely accurate and present in every scene.

Rockwell: Oh, yeah. It’s a very L.A. movie. [Cinematographer] Ben [Davis] shot Layer Cake and is a very talented guy. The light is definitely intentional. They wanted L.A. to be a character.

It added a certain heightened unreality to the whole thing. It was an L.A. where all of this craziness seemed slightly plausible. Chris, would you agree? You also live on the East Coast.

Walken: I like it here! I always have. I just — I’m not a good driver. Which is a liability. Everyone here is so expert. They blow their horns at you and pass you. Oy. If I lived here I’d stay in the house all the time.

Rockwell: You could survive out here. You just gotta spend a little money on taxicabs.

And on someone to clean up your yogurt for you.

Rockwell: There you go! “Scumbag!”

Taylor Swift's Kennedy Three-Way ... and Other Horror Stories From This Week's Tabloids