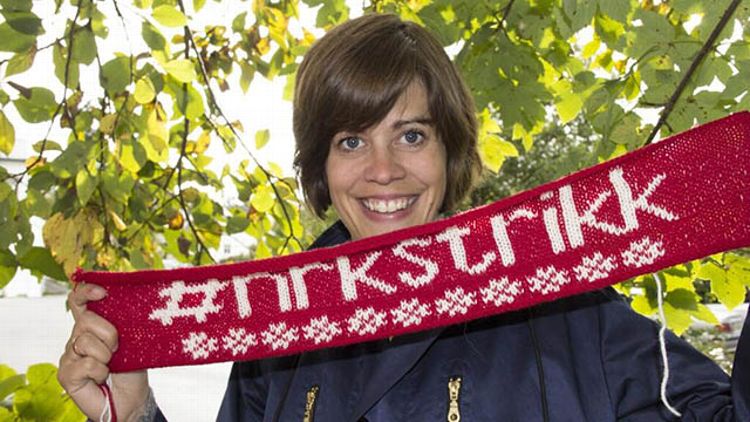 Last Friday in Norway, 1.3 million people watched strangers knit on television. For four hours they tuned in as people talked about knitting, and then they stuck around for eight and a half extra hours of actual knitting. I’m serious.

National Knitting Evening is not the first program belonging to a genre called “Slow TV”: Norway’s public TV company, NRK, is responsible for several. Its predecessors include behemoth-size studies on a train trip from Bergen to Oslo (the station’s first, in 2009, clocking in at seven hours), a cruise ship (a record-breaking five days), salmon swimming (18 hours) and a fire burning (12 hours, and very reminiscent of our nation’s own Christmas Yule Log broadcast). Norway’s population is just more than 5 million people, and more than half of them watched a cruise ship’s voyage for the better part of a week. Friday’s knitting broadcast didn’t fare quite as well in ratings — after all, it did not have the allure of fjords and ripples on its side. But the turnout wasn’t bad, even though National Knitting Evening may have failed to reach its goal — not a milestone viewer turnout, but breaking the Guinness World Record for turning a sheep into a sweater in the least amount of time possible. That, of course, doesn’t matter. Speed runs counter to the point, and breaking records is just sort of a cute excuse to watch something with the kind of appeal that becomes more obvious the more you think about it. Maybe the less results-oriented these marathons are, the better. They’re hybrids of endurance tests and hypnotizing ambient happenings, television that aims to be the opposite of what we’re accustomed to. They’re plotless and unedited, very low on drama and without many cues as to how to feel while you stare and listen.

NRK is reportedly developing an upcoming show called A Day in the Life of a Snail. This is not an untouched subject, as it turns out, but what this YouTube clip doesn’t have going for it is that it isn’t 24 hours long. Slow TV might be not only an antidote to, say, the sculpted (or fabricated) narratives of traditional reality television and documentaries, but to our shortened attention spans. Viewers don’t know what they’re in for, how long the show will run, or if anything will actually happen. In that sense, it mimics life, and this is but one of the many profound thoughts you might have on your third day of watching a boat drifting. Releasing an audience from the apprehension that a shark will fly out of the water to eat the crew of the cruise ship (or that Mrs. Larsen will stab Mr. Kristiansen in the eye with a needle mid-purl) is soothing, but there’s also a little bit of suspense: We’re so used to watching a screen in expectation of a story that it seems impossible there isn’t one.

I watched part of Andy Warhol’s Sleep in an art history class in college. It’s five and a half hours long and — spoiler alert — it’s not exactly jam-packed with twists and turns. (Poet John Giorno wasn’t an exceptional sleeper in 1963, though he may be better at it now.) I was not a huge fan of Sleep, but I was, in 2003, a very big fan of watching my iTunes visualizer or the comings and goings of the fish who lived in my virtual aquarium. Watching someone sleep can make a person feel intrusive, and carries with it different implications than focusing on a mundane activity or just like, nature, man. The intimacy of studying a vulnerable person is now even less appealing than it was in the ’60s, because being a resident of the present means acknowledging the fear, and constant threat, of being captured on film when you’re at your weakest. In fact, Slow TV acts like tryptophan to quell a few modern concerns: being exploited by or tricked by the media, being complicit in a celebrity’s self-destruction, or guiltily and gluttonously feasting on violence that was prepared because someone thought you wanted it (and then having to admit that you did want it).

All this is vaguely reminiscent of the ASMR videos that started receiving widespread attention in 2012. Autonomous Sensory Meridian Response is a pleasurable symptom that some people experience when they watch clips of folks speaking quietly or not at all while brushing their hair or tapping on plastic toys. The sensation has been described as a “braingasm,” but unfortunately it’s not universal. Many of us are mind-prudes and simply can’t get off that way. The failure to get excited by a woman lightly tapping wooden blocks together is frustrating when you can’t catch a tingle, because you know that the tingle is the point, the destination. A crackling fireplace promises nothing; it’s not a quickie, it’s tantric.

NRK’s slow shows have become nationally interactive, with plenty of social media buzz during the broadcasts, but the interactivity their producers tout as critical to Slow TV’s success is forged under different circumstances than those we’re familiar with. The action happens offscreen, in your noisy brain as it wrestles with the quiet: Was this how you used to see the world, before the knowledge of what was happening everywhere else was always at your fingers? It’s like exiting a noisy party by yourself through the back door and walking home, phoneless, while listening to the sound of your shoes crushing snow. You know that somewhere an important event is unfolding, or that, in a distant land, housewives are bickering and orcas are murdering their trainers. But during that walk, you’re coaxed into mindfulness. If Slow TV made its way onto American soil, maybe we, too, would jump (no wait, that’s too strenuous, it would be more of a gradual levitation) at the chance to dip into this sort of self-isolation, pausing to check in with others along our stroll. No expectations, no pressure, just comparing interpretations of a pleasant experience we all once had together, and alone.

Freak Show & Tell: In Rick and Karissa's Cheapskate Competition, There Are No Winners