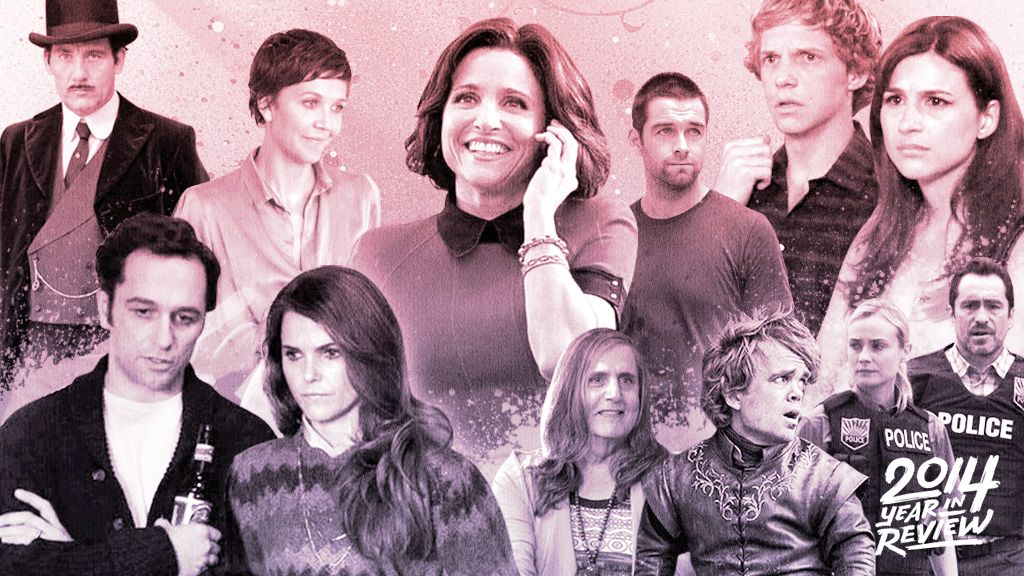 Banshee is as subtle as a fist to the face, as plausible as Rambo, and boasts a body count twice as high as Stallone’s epic. Yet it outclasses dozens of snootier series that didn’t even get within sniffing distance of this list. Why? Easy: Because Banshee doesn’t put on airs; instead it knocks the wind out of everything in its path. As piloted by novelist Jonathan Tropper, the show (about a crook masquerading as a cop in Pennsylvania’s most dangerous small town) is proudly lurid pulp entertainment, a throwback to the beat-up paperbacks that would spin their way from a drugstore rack into the dark hearts and fevered imaginations of otherwise upstanding civilians. Banshee doesn’t stoop to sex and violence. It is sex and violence. It’s a winking, self-aware distinction that makes all the difference.

There are plenty of shows about politics, but even the best of them eventually begin to sound like politicians. House of Cards was convincing as an upstart outsider, but once it was entrenched in the halls of power, it was as gassy and untrustworthy as any incumbent. Give me the partisan pleasures of Veep any day. It’s a savagely realized comedy that slices our gridlocked country right down the middle, revealing D.C. insiders not as proud gladiators in the coliseum but greedy clowns all stuffed into the same, barely functioning car. Nothing made me laugh harder this year than the sight of Julia Louis-Dreyfus (genius as always) collapsing in a bathroom at the precise moment she achieved the ultimate seat of power. The distance from the White House to the porcelain throne is shorter than one would think.

The fourth season of this low-key family drama was its best for all sorts of wonky reasons: The way its constant character shuffling ultimately settled on the best possible pairings; the way it learned to hide heavy exposition inside of transcendent action, like slipping poison into a chalice of wine; the way the expansive world map finally began to fold in on itself, transforming an entertaining, digressive epic into a single, thrilling story. But what matters to me most about Game of Thrones isn’t that it’s one of TV’s best shows. It’s that it’s unquestionably the most fun. For 10 weeks every spring, a certain kind of madness spreads among fans like wildfire on Blackwater Bay. It’s a dizzying, exhilarating streak of breathless recaps, crazy theories, bad puns, and worse Dothraki. (And I haven’t even mentioned the cat!) If this is what the Mad King felt, I wish he had reigned for 1,000 years.

The neatness of Breaking Bad spoiled us. The thing that has made TV great, historically, isn’t tidy resolution but a gleeful, optimistic messiness. Nothing is ever truly off the rails; there’s always room to build more track. (Isn’t “jumping the shark” just another way of avoiding certain death?) Give a promising TV show enough rope and it’s likely to weave a safety net. That’s precisely what happened with the second season of The Bridge, FX’s lyrical border noir. Rebounding from a problematic first year, the show exploded into technicolor this summer. The Bridge crossed borders fearlessly, showing us a nuanced Mexico (and Mexicans) rarely glimpsed on gringo TV. Where other dramas got dirty, The Bridge was unafraid to get weird, giving us Rush-addicted druggies, acorn-collecting accountants, and a cartel leader with a thing for Norway. There was plenty of death on the show, but it thrummed with the chaos of real life. That its reward was cancellation remains 2014’s biggest disappointment. Vaya con Dios.

Industry gospel would tell us that TV is a writer’s medium. The demands of production are too great, the maze of plot too thick for anyone other than the scribbler on his third espresso to be in charge. Then came The Knick, and industry gospel suddenly popped like one of Dr. Thackery’s uncomfortable balloons. Thanks to director Steven Soderbergh, who directed all 10 of these episodes, The Knick seethed and pulsed with a seedy, hypnotic energy never before seen on the small screen. This was an impeccable horror show about early surgery, yes, but it was also itself a kind of radical medical experiment. With his whirling cinematography and lack of patience for the stolid pipe-laying of typical dramas, Soderbergh used The Knick as a chance to rewire our brains on the fly, hooking TV fans on the jittery highs of a new visual language. I already need another hit.

In a year of exceptional British imports, this BBC co-production stands apart. A political thriller set on the shifting sands of contemporary Middle Eastern politics — wait, come back! — Woman was riveting, destabilizing entertainment. It dared to ask the sorts of knotty, real-world questions that are rarely heard even in nonfictional settings: What is the true price of peace? Does hope make you a visionary or a patsy? Can the past ever truly be buried? But beyond the brilliant performances from Maggie Gyllenhaal (as a drowsy aristocrat) and Stephen Rea (as a soft-spoken spy), The Honorable Woman is inspiring for the possibility it presents to our own evolving industry. Hugo Blick wrote and directed every single episode of this limited series, imbuing each frame with a deeply personal rhythm and a slashingly unsentimental point of view. More like this, please.

It can feel invasive to watch Transparent. Each half-hour is so tender, so raw, so intimate that it can overwhelm: Nothing on television is as forthright or fearless in depicting sex and sexuality. Human fumbling has rarely been so funny. But this is the furthest thing imaginable from cringe comedy. Creator Jill Soloway doesn’t have a cruel bone in her body. With a smothering warmth, she embeds the viewer inside the hearts and homes of the extended Pfefferman clan, all of whom are transitioning in one way or another: between gender identities, between sexual orientations, between perpetual adolescence and adulthood, between secrets and the terrible third rail of existence known as the truth. Jeffrey Tambor delivers the performance of the year as Maura Pfefferman, but he’s matched in wit and warmth by the entire cast. The best shows make me eager for more; Transparent makes me ache.

Nothing on television in 2014 gave me as much pure pleasure as the first season of this sour-sweet romantic comedy. Scarred by years in the network trenches, creator Stephen Falk bundled up every noxious cliché in the genre and tossed them from an overlook in Griffith Park. Thus liberated, he got busy making a show about real people in the real L.A.: scabrous, self-hating authors; insecure music publicists; hipster rappers; and Santa Monica Stepfords. Like Jimmy and Gretchen, its skeptical lovebirds, You’re the Worst doesn’t apologize for anything: not for drinking in the middle of the day, not for getting off instead of getting along, and certainly not for spitting in places that can’t be named. All of this is hilarious, sure, but it’s also honest in a way sitcoms rarely are. Happily ever after is boring. What about unhappily right now?

In its near-perfect second season, The Americans trampled over an impossible border. Not the one bisecting the two Berlins or the famously clogged D.C. beltway during rush hour. Rather, over the course of 12 ice pick–sharp episodes, the FX drama found a way through contemporary television’s most intractable divide: the one separating the head and the heart. This is a drama that ticks all the boxes for modern success: a premise that feels like a dare (KGB spies in Reagan-era suburbia), a sexy cast that clicks like a dream. But like any good double agent, The Americans does its best work undercover. The show is relentless in exposing the myriad ways in which ideology, role play, and illusion are central to our national identity — even for those of us who have real names printed on our passports. A marriage is as tenuous as a treaty. A family is much more vulnerable than a cause. We are all spies in the house of love.