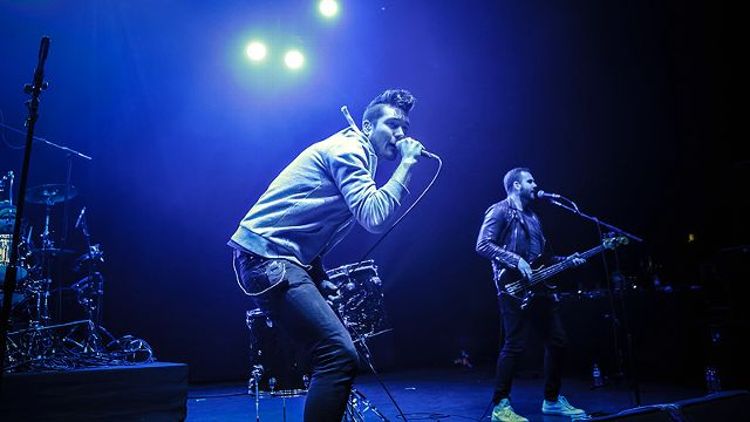 A few years ago, I started using the term “silent-majority rock” to describe bands that garner virtually no coverage in the music press and appear to be devoid of (for lack of a better term) “buzz” — and yet also happen to have hit songs and surprisingly robust album sales. This phenomenon became common after the wave of popular-ish ’00s indie bands — your Spoons, your Animal Collectives, your M83s — crested as a potential game-changing force on rock radio, leaving a generation of near-indie bands to fill the gap with the catchy, palatable singles their more credible counterparts largely failed to produce.

While it’s true that some of these bands — most notably Imagine Dragons and fun. — have gone on to become actual name brands, what most distinguishes a silent-majority rock band is its inherent anonymity. The task at hand is to quietly deliver gently grooving earworms with big, booming choruses that can slot easily in multiple formats next to the latest pop, rap, and R&B hits. These aren’t songs intended to dominate the culture or inspire What does this song say about us?–style think pieces; instead, they are pitched as the middle-management bureaucrats of the pop world, secretly securing their positions on the airwaves for months (even years) as dependably mediocre, one-size-fits-all placeholders.

The thing about being a faceless bureaucrat is that every once in a while, there’s a chance you might be recognized. Such is the case for the English synth-pop group Bastille, whose song “Pompeii” was one of 2013’s biggest “rock” singles. I put rock in quotes not necessarily to impugn “Pompeii” — which is a perfectly fine example of hook-rich and personality-poor radio fodder that vaguely resembles rock music — but rather to underline how many recent rock hits are designed to get lost in the scenery of other songs. “Pompeii” strikes the delicate balance of undeniable catchiness (the serviceable dance beat and Gregorian-like chant in the chorus instantly implant themselves in your brain) and resolute inoffensiveness (there is absolutely nothing abrasive or polarizing about this track) that rock songs must now have to save themselves from getting wiped off the radio playing field.

Even if you’ve brushed up against “Pompeii” at random times in the past several months, it’s possible that you aren’t aware of Bastille, which was formed in 2010 by singer-songwriter–Barton Fink ’do enthusiast Dan Smith. Whether it goes down as a one-hit wonder remains to be seen, but Bastille is far from an overnight success story. It took three failed singles from its 2013 debut, Bad Blood, before the group landed on an international smash with “Pompeii.” Now, Bastille is finally being primed for its stateside close-up: This week it was announced that Bastille will be paired with Jonah Hill as the guest stars on the January 25 installment of Saturday Night Live.

While SNL every so often takes a run at a musical guest that’s not yet a household name, the Bastille booking is sure to confuse and exasperate those who publicly express confusion and exasperation anytime an entertainer they haven’t heard of appears on television. So far this season, SNL has played it relatively safe, musically speaking, mostly inviting performers (like Arcade Fire, Eminem, Katy Perry, Justin Timberlake, and Kings of Leon) who have already appeared on the show and are otherwise firmly entrenched as superstar institutions. The only other “new” act from the first part of the season is in many ways the antithesis of a silent-majority rock band: Haim. The SoCal sister act was arguably the most hyped freshman rock band of 2013, towering over the music news cycle for weeks leading up to the release of its critically lauded debut, Days Are Gone. In the narrative fashioned by smitten music critics (including yours truly), the SNL appearance represented the climax of an important new band’s triumphant coronation. If your perception of reality is formed solely by social media and music websites, it was easy to believe that Haim was the next big thing.

In reality, Bastille (or “Pompeii” anyway) is significantly more popular (for now at least) than Haim. Bastille’s backstory might not be as sexy — the poor man’s Mylo Xyloto rehashes of Bad Blood pale considerably when placed next to the zeitgeist-y genre-bending of Days Are Gone — but “Pompeii” has left a far larger footprint on popular culture than any Haim song. (Haim’s highest charting single, “The Wire,” peaked at no. 25 on the rock chart. “Pompeii” is currently no. 2 for rock airplay and has crossed over as a legitimate pop hit.) While the wave of prerelease publicity carried Days Are Gone into the Billboard top 10, the album is close to slipping out of the top 100 after selling just more than 100,000 copies. Bad Blood, meanwhile, is hanging around just inside the top 40 after moving more than 160,000 units with a possible SNL sales bump on the horizon. (An expanded version of Bad Blood called All This Bad Blood comes out next week.)

So, consider this a warning: You may notice a strong infusion of Bastille and “Pompeii” in your life by the end of the month. This could be the last thing you ever read about them, but your ears won’t be so lucky in 2014.

Epilogue: The band that inspired me to start using the phrase “silent-majority rock” also stepped out of the rock radio salt mines to bask in the SNL sun way back in 2011. This group has been literally silent for a while now, but last week it posted a teaser online promising a new record for 2014.

Anybody remember these guys? Is it possible that 2011 took place 30 years ago?

Ah, yes, Foster the People, a group whose horribly awkward incompetence as a live act on national television has not prevented it from influencing subsequent radio grinders like Bastille (or from putting out a second album). By the way, why did Lana Del Rey and her handlers not use Foster the People as a human shield like Martin Sheen in The Dead Zone during the fallout from her horribly awkward SNL spot just three months later? At least LDR has a measure of charisma; FTP’s Mark Foster’s inability to sing or dance properly single-handedly set back white male cultural advancement two decades.

Anyway, Foster the People will soon have a new album out. Here’s a live version of one of the new songs. The band’s performance skills have not appreciably improved.