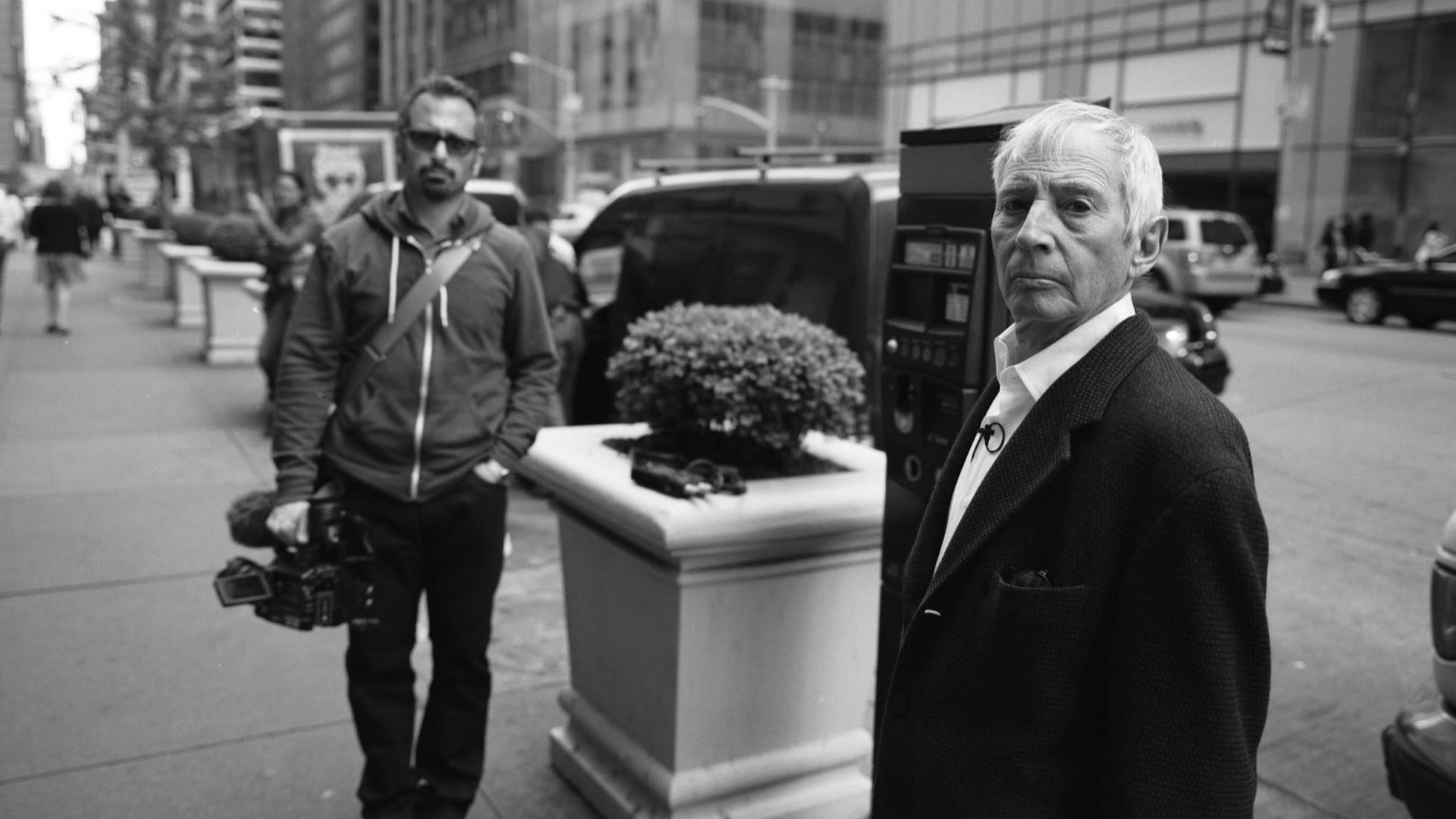 I became enamored of sociopath-watching in the late ’80s, after a therapist gave me an eye-opening reading list. Having been formally introduced to sociopathy, and its closely related cousins psychopathy, narcissism, and antisocial personality disorder, like a self-diagnosing medical student, I started seeing evidence of them everywhere. The potential for that evidence courses through The Jinx: The Life and Deaths of Robert Durst, which airs its season finale this Sunday on HBO, and I’m so eager that I have already eaten four batches of popcorn.

For people like me who obsess over analyzing pathologies and love to watch sociopathy play out both in fiction and the real world, there is such a bounteous bumper crop of locally grown, non-GMO sociopaths waiting to be harvested in media these days that the question must be asked: Are we, as a society, so deluged because we provided the right fertilizer for them to grow? Or is it just that so many of us armchair therapists have read those pop psychology books full of frightening warning signs that we now feel qualified to diagnose the people we once called “assholes” and “criminals”?

Our culture has a long, twisted history of crushing on sexy bad boys and girls in psychic pain who we like to imagine will be healed by the power of our love. We also cherish the parable of the Randle Patrick McMurphy–style troublemaker so filled with pure life force that he makes everyone he encounters reexamine their definition of sanity. Add in that staple of crime fiction, the Dirty Harry/Jack Bauer–esque renegade cop who lives by his own rules, and you get a sizable cast of characters who would score high enough on the Hare Psychopathy Checklist to receive a categorical diagnosis.

One reason is that as drivers of fictional plot, psychopaths and sociopaths are the best. Their egomaniacal lack of fear combined with their invulnerable grandiosity allows them to move virtually any scenario forward. Plus, in an odd way they exhibit extreme versions of traits that we as a society admire. Theirs is, on some level, the purest form of rugged individualism.

Maybe our love for people who live by their own moral compass was born from the lessons of World War II, when the Nuremberg trials showed us that “I was just following orders” was an unacceptable excuse. As mature human beings, we have come to believe that it’s our duty to rise above peer pressure and defy a lynch mob mentality. Naturally, we like our fictional heroes to triumph over these same challenges.

The difference between the 20th-century hero prototypes and the newer, shinier 21st-century ones is that we gave up expecting them to be pure of heart. Tony Soprano was our training wheels. Walter White was our first adult bike. They taught us how to accept and root for the humanity of a sociopath, even after learning that he is not on the right side of things. Dexter Morgan might be the most fully realized version of this model. Like old-fashioned heroes, he kills assorted bad guys. But the contemporary twist is that he understands he’s a psychopath. His real mission as a murderer is in service to some warped personal need. He is an accidental do-gooder motivated by self-absorption.

Suddenly we could all be detectives because, almost instantly, there were videos to study. Often, the sociopaths provided the evidence themselves. We could slow them down and analyze them for the telltale symptoms, like superficial charm or pathological lying. We could watch the sociopath exuding the charisma that comes from being freed from the bondage of empathy, then gasp at how instinctively they know how to play us. Maybe, we would secretly think, if we scrutinized their behavior closely, we might pick up a few pointers about how to spot them before they came sneaking up on us next time.

Then again, it’s possible that our fascination with sociopaths is a form of wish fulfillment. Maybe we are grateful that they provide us with an object lesson on what might happen if we were to play outside the rules. While we wait for them to be stopped, we can watch with awe as they carefully design a civilization for one, then marvel at their blind courage as they charge forward to take whatever they want.

It’s hard not to sort of admire the way they display the appearance of confidence and total control, two traits that not only open doors but can be mistaken for sexual magnetism. It’s why Jamie Dornan was more seductive playing the manipulative serial killer hiding in plain sight on the two fantastic seasons of BBC’s The Fall than he was as the preening S&M-inclined CEO who wasn’t really fooling Dakota Johnson in Fifty Shades of Grey. It’s part of why otherwise-repellent prisoners get letters from interested romantic partners. Sure, they are strange romantic partners, but these days who doesn’t meet those? Between online dating and social networking, our chances of becoming personally, even intimately, involved with that one person in 25 that experts say is a sociopath are far greater than ever before. To complicate things further, because sociopaths are more frequently found in the top echelons of power than the bottom, they have intimidating résumés — not unlike The Jinx’s Robert Durst.

At the end of Episode 5, Durst — its never-convicted “star” and heir to one of the biggest real estate organizations in New York — is implicated in the death of a close friend through handwriting analysis. It was as shocking and riveting as anything I’ve seen on television since the end of my favorite show of the ’90s: the O.J. trial. On Monday, the New York Times reported that the Los Angeles district attorney’s office might reopen the investigation into the death of writer Susan Berman, which authorities have long believed involved Durst.

Bizarrely, this documentary was the idea of the troubled human at its center. The spotlight he claims to be avoiding was no longer on him when he contacted Andrew Jarecki, the show’s director. Currently living as a free man, Durst had managed to avoid being convicted in the homicides of his two “best friends” and the mysterious disappearance of his wife, Kathie, even though there were no other suspects and plenty of evidence. Kathie had even confided to the people closest to her: “Promise me if something happens you’ll check it out. I’m afraid of Bobby.”

Yet here he is, on HBO, allowing these deaths to be reexamined by a director who understands them thoroughly. “The downside of giving an interview is that the interviewer will make me look as bad as possible,” Durst explains in Episode 1. “The upside is that there will be something out there from me. Since I got out of prison I’ve never said a word. I’ll tell it my way and if someone is open to a different way of seeing things … ”

What he doesn’t mention is what we sociopath-watchers know: Like every good sociopath, his life didn’t feel right to him without a high-powered stream of attention.

If there is a Jinx party game to be played, it involves Robert Durst’s deep, involuntary blinking during these interviews. It’s not regular, casual blinking. It’s a hard closing of his eyes; the kind of a blink that resets the clock and makes everything go dark. It happens after every emotionally resonant statement he makes.

“I had to get this corpse out of my apartment. Period,” he recalls, explaining how he sawed the body of his “best friend” into pieces.1 Then he BLINKS. “I got this idea that I was going to cut it in half,” he says, unaware he is referring to him as “it.” Then he BLINKS.

“Did you have anything to do with the death of your wife?”

“I don’t know that she’s dead.” BLINK. BLINK. “I had nothing to do with what caused her disappearance.” BLINK.

“Do you have any theory of what might have happened to Susan Berman?”

“No.” BLINK. “I had nothing to do with Susan Berman’s death.” BLINK.

The Jinx offers the student of sociopathy an opportunity to consider all the DSM diagnostic criteria for sociopathy/psychopathy/antisocial personality disorder. A sociopathic completist, Durst doesn’t miss a symptom. Watch him be glib and frank, with touches of self-depreciation that actually verge on the charming. Listen to him explain how he sees himself as an exception to the rules while examining a video that shows him being taken into custody for stealing a chicken salad sandwich at a drugstore in Pennsylvania, after jumping bail in Texas, even though he had $500 in his wallet and $38,000 in his car.

“I don’t know what gave me the idea that I should shoplift,” he says. “To see if I could get away with it or whatever it was, I decided I’d rather not pay. I was just going to take it.”

Listen to him explain why the alibi he gave the cops on the night of his wife’s disappearance was full of lies.

“It was like a negotiation,” he says without emotion. “You tell someone you did something and that’s it. They don’t go back there. They don’t look for motives. I thought that would get them to leave me alone.”

Then of course he blinks. Hard. Bottoms up!

This Sunday is the finale of The Jinx. After that, we’ll all have to find ourselves a brand-new nest of sociopaths. My advice is not to go searching for CEOs on Match.com, where it’s possible former ladies’ man Durst may have himself listed — too risky. Instead, now is a perfect time to go online and watch All Good Things, Jarecki’s fictionalized account of the Durst story from 2010 starring Ryan Gosling, who does a decent job of playing Durst. It’s an essential companion piece to the series because it satisfyingly fleshes out some of the details of Durst’s behavior while logically speculating on others. If you’re still hungry after that, for dessert there’s an old Dominick Dunne Power, Privilege, and Justice special about Durst on YouTube. Or you could always just immerse yourself in the news and see if you can figure out which other twisted people are probably trying to bring their criminal records to the attention of some director in the hope that he will give them their own show next season on HBO.