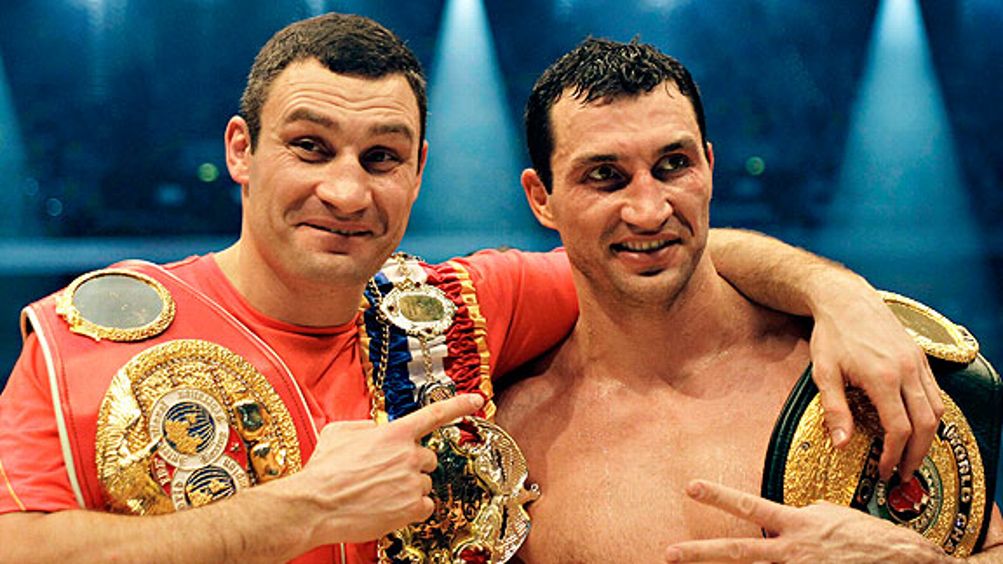 The Klitschko Brothers, Vitali and Wladimir, are the reigning heavyweight boxing champions of the world and arguably among the most dominant fighters in the history of the sport. For years, they have been obliterating opponents, and the two of them now hold all four heavyweight title belts. The Klitschkos grew up in Ukraine before the fall of the U.S.S.R., and now split their time between Germany, Los Angeles, and Kiev, where Vitali has become involved in politics as leader of an opposition party called The Punch.

Today, a documentary about the Klitschko brothers opens in New York and Los Angeles; a wider release will follow in subsequent weeks. Klitschko follows the pair from their humble beginnings through their rise to stardom. The film blends in-the-ring footage with an exploration of the larger forces at play in their lives — the dissolution of the Eastern Bloc, the aftermath of the nuclear meltdown at Chernobyl, the brothers’ powerful bond, and notions of how fighters are born and learn to persevere.

Grantland’s Davy Rothbart went a few rounds with the Klitschko Brothers (around a conference table in a West Hollywood office building) and spoke with them about their journey to becoming world champions.

In the documentary, there’s a fascinating moment, Vitali, where you’re 17 years old and you travel to the United States for the first time with a delegation of Ukrainian boxers. You talk about all the propaganda you experienced growing up in the Soviet Union. What were you expecting when you arrived on U.S. soil?

Vitali Klitschko: My whole life I was told that the U.S. was a horrible country. That everyone was aggressive and that crime was out of control and that everywhere you went people were shooting each other in the street. I also was told that Americans wanted to go to war with the Russians and make us their slaves. At some point, I always believed, I would have to defend my home country against crazy Americans who wanted to control the whole world.

Wladimir Klitschko: Just to give you the full contrast, these days we have an American training camp director from Pacific Palisades, California. I explained to him that when I was 12, I was shooting AK-47s, handling hand grenades, running through underground tunnels, practicing drills, and studying how to get along with tank attacks. He said, “What? When I was 12, I was driving to Disney World to visit Mickey Mouse. What the hell were you guys thinking?” Well, we were preparing. We’d basically been brainwashed.

So when you arrived in America, how did you reconcile what you’d heard with what you saw?

Vitali: I was in total shock. I couldn’t understand why people were so friendly — more friendly than Russia! Good food, beautiful beaches … I felt like a little kid, in awe of things. I always thought there was only one type of cheese, you know, the thing we’d always called “cheese.” And in a grocery store, I saw a hundred kinds of cheese! It was amazing. My mouth was hanging open. When I came home, everybody wanted to know what the U.S. was like. At the time, it was easier for a Russian to travel to the moon than to the United States. When I explained what I’d seen, it made quite an impression on people.

Wladimir: He brought me back a special gift — a bottle of Coca-Cola. In the Soviet Union, everyone had heard of Coca-Cola, but nobody had tasted it! I was so happy.

And I understand you developed a taste for Western movies, too?

Wladimir: We had Chuck Norris posters on the wall of our room, and a lot of Arnold Schwarzenegger posters. I loved Conan the Barbarian and The Terminator. Red Heat was the best.

Are there fighters or athletes who have inspired you?

Wladimir: I would say that Roger Federer is pretty amazing. And Manny Pacquiao — he’s such a tiny, little lightweight guy, but the way he fights makes people so excited. And I went to a basketball game a couple of times here in L.A. to see the Lakers, and in Florida to see the Miami Heat. I loved to see all those big, tall guys jumping around and making scores. I know he’s retired, but I’m a big fan of Shaquille O’Neal, his game and his personality. I have a pair of his shoes in my office. You see the size of his shoe and think, This is not real, this couldn’t belong to a human being. But he is human!

You guys were 10 and 14 in 1986, at the time of the Chernobyl nuclear disaster. How did that affect you?

Wladimir: We lived just 60 miles from the accident site, near the Kiev airport, on a military base where our father worked. I remember helicopters and airplanes taking off and landing constantly, leaving for Chernobyl to drop off lead to absorb the radiation.

Vitali: Our father was one of the first on the scene. He spent months there working on radiation containment and cleanup.

Wladimir: When cars and military vehicles came back from Chernobyl, they would wash them off at the base where we lived. The water they used to rinse off the cars formed big puddles. Me and my brother and our friends would play in the puddles with little paper boats. At the time, no one knew how serious the radiation problems were. Eventually, all the kids from my school were evacuated and sent down to the Azov Sea in southern Ukraine. Much of the city was emptied. But Vitali stayed.

Vitali: The explosion affected the life of our family and also millions of people around the world. Our father, he died two months ago from cancer. The doctors said it was a result of his contact with nuclear fallout. I have never cried so much.

Wladimir: A few weeks ago I went to visit Chernobyl for the first time. I had to see the place. You carry these radiation meters with you, and there are rules about where you can walk and where you can’t. Radiation is hard to comprehend — you can’t smell it, you can’t feel it, it’s not warm, it’s not cold, you can’t see it in the air, but still it remains. I went to a school where one of the classrooms had been left untouched, just like it was on April 26, 1986. It was eerie, like a time machine — everything looked the way things had looked in Soviet times, with all of the same books we’d had in my classroom when I was a kid. The attendance sheet on the teacher’s desk was marked “April 25,” which was a Friday. The explosion happened on Saturday.

What do you think are the lessons to be learned from Chernobyl?

Wladimir: That nuclear plants are not stable. Just one mistake through technology or human hand can cost lives for generations to come. We’re only seeing the beginning with what has happened in Fukushima, Japan. Even the United States had a near meltdown on Three Mile Island. These tragedies aren’t local. Radiation doesn’t recognize borders. A meltdown in Japan or India, say, is a danger to the whole world. Wind circulates the radiation everywhere. Water quality is affected. We all eat the same fish. We use products from all over the world — if something is contaminated, it will cause harm. After Chernobyl, thousands and thousands of people, if not millions, were given a death penalty and had to pay the price, our father among them.

Did you see any hopeful signs for the people living around Chernobyl?

Wladimir: I’d heard about how bad things are, and, yes, there are a lot of health issues for people, especially the kids. But I also see people rebuilding and carrying forward. Me and my brother are financing some projects for kids in Zone 2 and Zone 3. These are the communities closest to Chernobyl (Zone 1 is uninhabitable). I understand why people would choose to return — this is home to them — so we want to help make it the best place to live that we can.

Vitali, you’ve recently taken an interest in politics. You ran twice, unsuccessfully, to be the mayor of Kiev, and your Punch party has claimed a large number of seats in local legislatures. As someone who’s used to winning, is it different being in the political ring than the boxing ring?

Vitali: There’s a huge difference. Politics is a dirty game. We have our rules in boxing. In politics, no rules. Especially a young democracy like Ukraine. It’s more like MMA.

Vitali: Ukraine has huge potential. It’s a great country — the second-biggest in Europe, with almost 50 million people. We just celebrated our 20-year anniversary of independence. But in 20 years, we have not seen big results. It’s very painful to read about Ukraine as the most corrupt country in the world. We can change a lot of things and increase the standard of life for everyone in Ukraine to the level of the U.S. and countries in Western Europe. But first we have to change the rules of the game inside Ukraine.

How do you believe that you, personally, can best effect change?

Vitali: From inside. Look, we can make demonstrations, but it doesn’t work. We can knock on the door, and the doors will be closed. But if we enter the realm of politics and work from inside, there is potential for change. Sports has given me the opportunity to travel around the world and see new countries and meet so many different people. I’ve gained new perspectives. Now we have more than 10,000 people as members of our party. To all of them we stress the importance of two things: a moral approach to life, and professionalism. We are preparing for the parliamentary elections next year. It won’t be easy, but if we can win even a fraction of the seats in the new parliament, we’ll have a chance to make real, lasting change in the Ukraine. It’s an exciting time in the world — democracy, in all its different shapes, is rolling around to new countries all the time. To have a chance to shape the democracy in my home country is an honor.

Vitali, you have two sons and a daughter. If one of them said they were interested in pursuing boxing, what advice would you have?

Vitali: Well, they have always preferred horse racing, tennis, chess, and the piano. But the oldest one, who’s almost 12, just a couple of months ago he said, “I want to be a boxer.” I was like, Okaaaaay. Boxing is a good sport, but I told him, “Hey, it’s not easy.” I know it looks great and he sees his father on the red carpet, in the limelight, world-famous, but behind that is a lot of hard work. A lot.

There’s a famous French film director, Claude Lelouch. He was a big boxing fan, and he once said, “Boxing is the cruelest sport, but the one that is most similar to life.” In boxing, you need to have a goal and fight for it. Sometimes you deliver punches, sometimes you find yourself on the floor, and that’s when you need to find the power to stand up and fight again. In the end, you will be the winner if you have enough heart and enough patience. Life has the same exact rules.