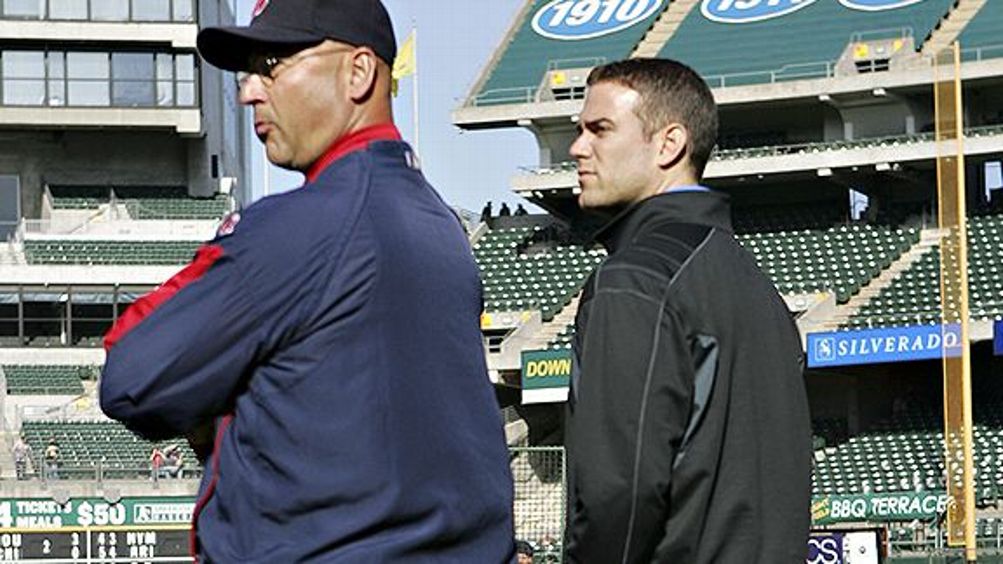 Tito Francona is tired. He is sitting at his desk in the manager’s office located at the far end of a small locker room in a ballpark — Fenway Park — approaching its 100th birthday.

He is wearing white uniform pants, a red hot-top and black spike-less athletic shoes, a Red Sox cap on his hairless head. And he is staring at a cluster of numbers on the screen of a laptop. The numbers run alongside the names of those players who are in the starting lineup of the Baltimore Orioles, the Friday night game about four hours away. The numbers are mathematical guidelines to the recent baseball past: What Baltimore players did against Red Sox pitchers. Where players are most likely to hit the ball if they connect with a curve, a slider, or a cut fastball.

“I used to do these by hand,” he says. “Did it before all this math stuff and computers got so big. Did it without knowing it. When I managed the Phillies. Did ’em all by hand then. Would sit down with a pencil and a piece of paper and go through opposing lineups. Took forever. Now it’s all on these things, computers.

“And I suck at computers,” he is saying. “I’m a one-finger guy with them. I can get around on a computer OK using one finger but it’s not my favorite thing.”

“How you doing otherwise?” he is asked.

“He’s OK,” said the Red Sox skipper, now in his eighth summer of employment with a club that dominates daily discussion in New England. “Guys in his squad in front of him on patrol got hit the other day. Tough day for him. Good thing though, he loves what he’s doing.”

The father now talking about the son: 26-year-old Lt. Nick Francona, United States Marine Corps, halfway through a six-month, one-day tour leading a rifle platoon in a long war that has forever ravaged a country locked somewhere in centuries past, Afghanistan.

“Awful, ” the manager says. “I’m doing awful. My wife’s doing worse. I think about it all the time. Worry about him all the time. Hard not to. Try and stay away from the news about it. Try not to watch TV when stories about it are on, but it’s there, you know? It’s always there.”

The phone on his desk rings and Francona reaches to answer with his left hand, the right-hand index finger slowly scrolling through the Orioles roster on his laptop, his eyes narrowing behind glasses, looking, always looking for an edge.

“Yeah Theo, what’s up?” he says, pausing to listen to the guy on the line, Theo Epstein, the 37-year-old general manager.

“Yeah, I spoke to Buck Showalter about that … OK … Talk to you later.”

“Theo,” Francona says, hanging up, a smile creasing his weary face. “How do we get along? We got through eight years here together. We haven’t killed each other. I’d say we get along pretty good.”

The Major League Baseball season runs from early February, across spring, through summer, and concludes for most players and teams just as Columbus Day approaches. The season, longest of all the majors and quite exhausting, is a bit like dating a nymphomaniac; it demands daily performance. And in Boston the expectation is always to play toward Halloween.

In some aspects the game has changed irrevocably since a young Tito Francona, his father’s first baseman’s mitt on his hand, ran to sandlots in the small Pennsylvania town where his family lived. Managers today are provided tools to compete that were simply not available 20, even 10 years ago. They have access to a Niagara of information sometimes spoon-fed by a generation of front-office young people who have rarely played actual games.

“People, some writers I guess, get that wrong you know,” Tito Francona points out. “Theo and the guys working for him, they’re not in here six times a day with stats telling us what to do. We get stuff before a series begins and it’s valuable. I study it. I do.

“But it’s about more than numbers,” he says. “I remember a few years ago, we’re playing the Yankees on national TV and one of the kids in baseball ops — he’s not here now — says to me about five hours before the game, ‘You got Mike Lowell in the lineup?’ And I say, ‘Yeah.’ And he says he doesn’t do well in the matchup with Chien-Ming Wang, who was pitching for the Yankees.

“I say to the kid, ‘So you don’t want me to play him?’ And he says, ‘Yeah’ and I tell him, ‘OK. Look over there. There’s Mikey Lowell’s locker. He’s over there. You go tell Mikey Lowell he’s not playing in a national TV game against our biggest rival ’cause your fucking numbers tell us not to play him. See what kind of reaction you get from him and then come back and tell me.’ Course Mikey Lowell played that game.

“That doesn’t happen a lot, though. It works pretty well, the numbers stuff and us down here.”

“What are the biggest differences between you and Theo?” Francona is asked.

“There aren’t a whole lot,” he answers. “We talk every day. It’s good. We’re not yelling ‘Shut the fuck up’ at each other either. He knows I value the input I get from him and the guys in baseball ops, but he knows my world down here in the clubhouse is different from theirs.

“I get it. He knows I get it. And he knows getting a player in winter is different from getting a guy ready in the seventh inning. In uniform you’re looking at today. Right now.”

Two different worlds. Francona and Epstein. They are characters out of a kind of baseball version of Upstairs-Downstairs the old PBS series about class and expectation. One is Ivy League. The other is Summer League. One grew up dreaming of baseball. The other played it, raised in a house with a father who made a living at it in the major leagues.

Terry Francona is 52 years old, a baseball lifer from New Brighton, Penn., where the median annual family income today is roughly $31,000. The town is 30 miles northwest of Pittsburgh, and it is a place where men worked factory jobs and women knew how to stretch every grocery dollar, day to day, week to week. He went to high school there, attended the University of Arizona, was a 1980 first-round draft choice by the Montreal Expos.

Theo Epstein, 37, grew up in Brookline, Mass., median annual family income, $120,000, in the shadow of Fenway Park. He went to Yale, was sports editor of the Yale Daily News, got a job as a summer intern with the Orioles, parlayed his energy and his instincts into a front office position with the San Diego Padres, came home to Boston when John Henry, Tom Werner, and Larry Lucchino purchased the Red Sox in 2001. Took over as general manager in 2003, a lifelong dream in his back pocket at age 29.

The other day Epstein was sitting in a conference room located in the bowels of the ballpark, in a space that used to be part of an old bowling alley before it and much of the rest of Fenway was renovated and rebuilt under the watchful eye of Lucchino and ballpark architect Janet Marie Smith. He is a confident, disciplined, self-contained young guy, cautious with language and body movement, always alert that in the crazed media atmosphere that surrounds the Red Sox, one dropped syllable or the wrong adjective could put thousands of talk-show callers into crisis mode. In addition to statistics, the semantics of baseball have changed, too, young front-office people far less reliant on one of the locker-room staples of the game: The F-Bomb.

“What do you think Tito said about you?” I ask Epstein.

“Ahh,” he says, “he probably said we worked really well together. That we understand each other and respect the differences between our two jobs, and that he knows I have his back.

On the walls of the conference room were several white-boards filled with names of high school and college players just drafted, along with others to be looked at in fall ball leagues. The future hanging right there. The immediate, game no. 89 on the march to 162, four hours away.

“Actually we’re like an old married couple,” Epstein adds. “I can usually tell from his facial expression what kind of mood he’s in. And there is an element of ‘his’ world versus ‘my’ world in the relationship, but we’ve learned to pick our battles, and as well as I know him he knows me too.

“Communication is different in the clubhouse than it is in a boardroom. The heartbeat that exists in the clubhouse … you don’t find that same type of heartbeat in the front office. There is a cloak of intensity in the clubhouse that doesn’t exist here,” the general manager points out. “There is a little more objectivity here in this office. We see the game at 10,000 feet. Tito sees it 50 feet away. Tito is looking at tonight’s game and those of us in baseball ops, a lot of the time, are looking at the next five years.

“His job is clear: Win tonight’s game. That’s his focus. Ours is that, as well, but the focus is also on the years ahead. That’s the inherent conflict between the two jobs, his and mine. It’s the subjective versus the objective.”

“What did you want to know from him when he interviewed for the job?” Theo Epstein is asked.

“That’s interesting,” he replies. “The big thing was what kind of relationship would exist? Would both of us be willing to say anything to the other without worrying about hurting feelings?”

“Right before I interviewed for the job with Theo, I called Mark Shapiro of the Indians. He’s one of my best friends in baseball and I asked him what I should do,” Tito Francona was saying earlier. “He gave me good advice I still use today. Mark told me, ‘Just don’t try and bullshit him.'”

“It’s become like a family relationship,” Epstein says. “You can’t bury things. We get them out in the open. I recognize the limitations of my view and my background but the two of us work well together.”

Epstein had just returned from lunch with his father, Leslie Epstein, who retired as head of the creative writing department at Boston University. The day before, a 39-year-old Texas firefighter sitting at a Rangers game alongside his 6-year-old son had died after falling out of the stands in pursuit of a foul ball tossed toward him as a generous gesture by Texas outfielder Josh Hamilton.

A dad’s dying young, at a ballpark, his little boy bearing eternal witness, clearly touched Epstein. He is sometimes labeled as cold and impersonal in his approach to whom he wants on or off his roster and what his club’s needs are, but what took place in Texas clearly triggered a reality he knows well: He is a young man living a dream.

“When I heard about that I wanted to have lunch with my dad,” Theo Epstein says. “What an awful story.”

In the manager’s office, Francona, his son Nick constantly on his mind, was attempting to lose himself in the landscape of a baseball game about to be played with the Baltimore Orioles.

“Theo knows,” Francona says with a slight laugh. “He knows he’s already looking at next year’s draft and he knows I’m down here looking at the seventh inning tonight. That’s the game.”

Mike Barnicle is an award-winning journalist. This is his first article for Grantland.