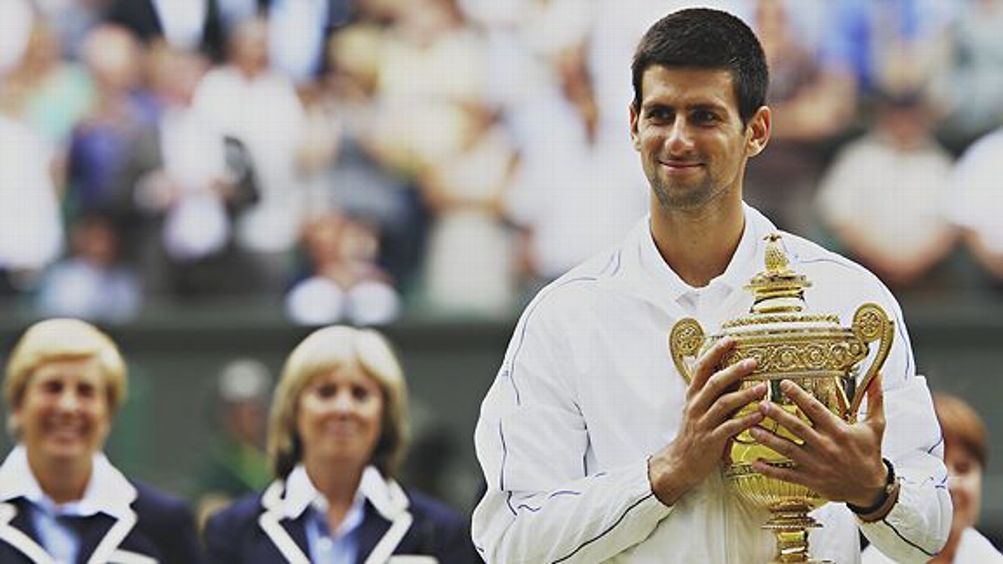 During the long, gray decline of the Sampras generation, the top players mostly rode out their glory years within the same hierarchy. Sampras was the best, Agassi was a credible rival (albeit one who never really presented a threat to Sampras’ legacy) and the supporting cast, the Rafters and Kafelnikovs, scrapped for whatever they could get. The young players who eventually inherited the no. 1 ranking from Sampras were all kids like Gustavo Kuerten and Lleyton Hewitt — clay-court nerds and scrambly overachievers who didn’t topple their predecessors so much as wander into the void they left.

In the Federer era, the story has been different. Just when it looked like Federer had bulwarked himself in for a years-long reign of dominance, Nadal roared into contention, taking down Federer while the preppy-casual champ was still at his peak. Suddenly we got to see what it looked like when Federer had to fight for his life, and on top of that, we got the thrill of watching a spectacularly talented young player struggle to prove himself against an established champion. The rivalry produced some of the greatest tennis the world has ever witnessed, upending every pundit’s “who’s the greatest of all time” calculations. It could be sad (watching Federer get crushed in the ’08 French Open final), it could be epic (the entire 2008 Wimbledon final, when Federer dropped the first two sets, then won two tiebreaks to even the match before falling 7-9 in the fifth), but it was always the sort of drama you can count on seeing only a few times in your life as a sports fan.

Last Sunday, in the Wimbledon final, the succession happened again. This time, Novak Djokovic did to Nadal what Nadal once did to Federer, taking the match, and the championship, 6-4, 6-1, 1-6, 6-3. After a year of picking the Spaniard off in smaller tournaments1 while piling up an overall record of 47-1, Djokovic finally beat the king. As with Nadal-Federer, the key wasn’t just that the younger guy won, but that the loser lost despite playing really good tennis. Over the first hour or so of the match, Nadal’s first-serve rate was 91 percent. During the middle phase of the match, when Djokovic started dictating every rally, Nadal sometimes hit three or four shots in a row that could have been winners against any other player. Each time, Djokovic managed to keep the ball in play en route to a winner of his own.

Because Nadal was so solid, all the pressure fell on the mind of Djokovic. Could the younger player hold up against the inevitable onslaught from the proven champ? Djokovic’s win took tennis to a very high plane — someplace noticeably better than Nadal’s near-best. It was as perfect a symbolic coup as you could stage. Not only will Djokovic be no. 1 when the new ATP rankings come out, he validated his astonishing year by seizing the crown from the (former) best player in tennis in the biggest match in the sport.

The argument that Federer is the top player ever to hoist a racket is pretty straightforward: He’s won 16 Grand Slam tournaments (two more than Sampras), won five straight Wimbledons and five straight U.S. Opens, turned in three of the greatest years in tennis history from 2005 to 2007, once won 11 Grand Slams in four years (a record for either gender), and played in 23 Grand Slam finals in a span of 32 majors (Ivan Lendl is second on the list with 19 in 40). The numbers are all on Federer’s side. The case for Nadal is a lot shakier, but it’s also simple to make: If Federer is the best ever, then why does Nadal always beat him? Nadal’s overall record against the Swiss player is a pretty decisive 17-8, and if you rack up that kind of ownage against the player everyone thinks is the greatest, and then you go out and win a bunch of Grand Slams yourself, well, how are you second to anyone?

In other words, the Federer-Nadal rivalry has confounded our normal assumption that greatness, wins, and dominance are all inextricably linked.2 Federer has the most wins, but Nadal has dominated Federer. So what matters more? And while we’re not quite there yet, Djokovic’s win at Wimbledon threatens to mix things up even further. Djokovic has now won five straight against Nadal while Nadal was ranked no. 1 in the world, including wins on all three surfaces and in a Grand Slam tournament final. What happens if Djokovic — who doesn’t dominate Federer, as their French Open semifinal this year proved — turns out to dominate Nadal? We’re looking at the possibility of a greatness equation in which, measured by overall results, Federer > Nadal > Djokovic, but measured by dominance, Djokovic > Nadal > Federer > Djokovic. It’s as if math looked at all the talent at the top of the men’s game right now and spontaneously burst into flames.

I realize it’s frivolous to start evaluating Djokovic’s world-historic significance, or even Nadal’s, while they’re both in their mid-20s.3 But, if nothing else, the crazy dissociation between Grand Slam titles and head-to-head domination demonstrates the intensity of conflict in men’s tennis. You can’t take anything for granted; everything is always at stake. The English journalist Jacob Steinberg wrote Sunday: “This isn’t the best time to be excellent at tennis. You have to be perfect.”

Not since the late ’70s/early ’80s has men’s tennis been this cool. Apart from the fact that the power-topspin game was so emphatically on display (and that the tournament’s organizers keep slowing down the grass to make it play more like Roland Garros), Sunday’s final almost felt like a throwback featuring McEnroe or Connors or Borg. There was one insane stretch early in the second set, just as Djokovic was achieving liftoff, when the players kept trading huge shots, ripping crosscourt backhands, pumping their fists and yelling after every point. With Djokovic leading 40-15 on Nadal’s first service game in the set, Nadal parried the Serb’s return with a delicate drop shot that left Djokovic scrambling to catch up. Djokovic slid and ripped back an utterly impossible sharp-angled, cross-court backhand. When Nadal failed to reach it, the Djoker ran backwards, pounding his chest and screaming. It was the perfect exchange because it highlighted how, when tennis is played at this level, every point carries the possibility of greatness.

Whenever the “dynasties vs. parity” debate comes up in team sports, I always think that what you really want is to have a bunch of dynasties playing against each other at the same time. Well, in tennis right now, Federer is still really, really good. Nadal is smack in the middle of his prime. Djokovic’s dominant year makes both those players more interesting in the same way that Nadal’s rise a few years ago raised the stakes for Federer’s legacy. Federer will surely regroup for at least a few more deep runs in majors. Nadal is going to figure out how to run around his backhand against Djokovic. It’s going to be fascinating to watch Djokovic for the rest of the year, and it’s going to be equally fascinating to watch the older players try to adapt.

After this Wimbledon, the last two kings are dead.