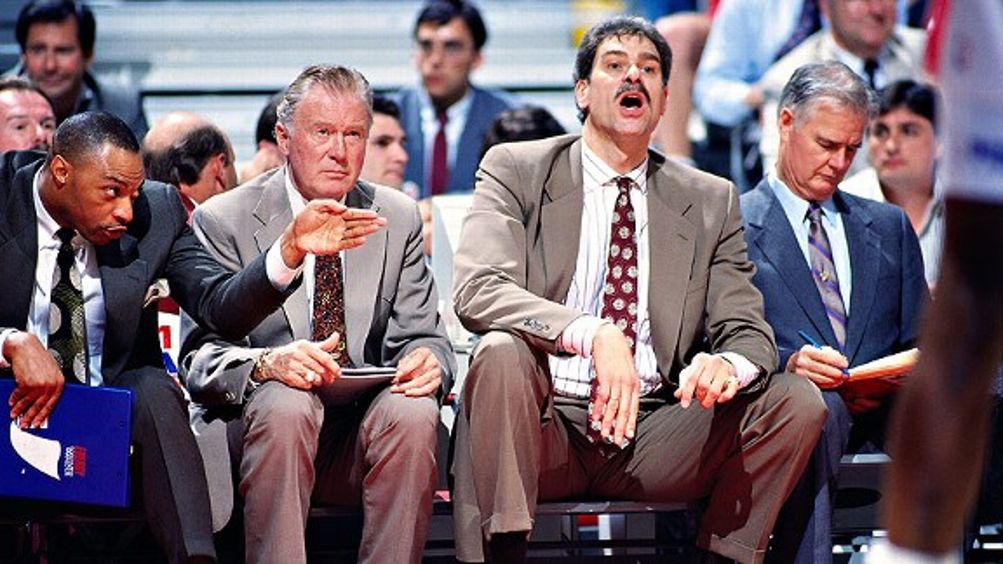 The Triangle offense has been, pretty much irrefutably, the single most dominant offensive attack (in any major sport) of the past 20 years. Since 1991, teams running the Triangle have won 11 of the 20 possible NBA titles. Obviously, that statistic is a little disingenuous: Those 11 championships involve only one head coach and are distributed between two dynastic teams (both of whom had greater talent than virtually anyone they faced). If you install Michael Jordan or Kobe Bryant into any offense, you’ll win 60 games. The Triangle was not the reason the Bulls won six titles and the Lakers won five. But the Triangle was what both teams used exclusively. It wasn’t the explanation for their success, but it was central to their operation. It was a component of their dominance. Which is why it’s so strange that — today — not one team in the NBA uses the Triangle. It’s a dead offense.

So why did it die?

The easy (and lazy) answer is that no one uses the Triangle because it’s too complex. As a rule, coaches are plagiarists. When a coach sees something that works, his natural inclination is to steal the idea — except, it seems, if the sport is basketball and the scheme is the Triangle. It’s arcane and intimidating. Everyone seems to understand it a little, but almost no one understands it completely. It’s both familiar and enigmatic: The Triangle is perhaps the only offensive set any casual NBA fan can identify by name, despite the fact that no one outside of Phil Jackson’s coaching sphere can describe how it works with any clarity. But that dissonance, argues Jackson, proves nothing.

“The Triangle is extremely simple,” Jackson insists. “You just need enough energy to get up and down the floor, because it’s a 94-foot offense. Everything happens in 4/4 time, like rap music. That’s how I always described the tempo to players.”

Of course, what Jackson considers uncomplicated isn’t a universal condition — moments after claiming that the Triangle was “extremely simple,” he mentioned that there are approximately 35 different options that can be used when the ball is reversed to the top of the key. The Triangle relies on its practitioners’ ability to read an opposing defense in real time, so it’s only as simple as the dumbest player on the floor. That’s part of the reason it never became normative. Another might be Jackson’s perception as a deeply Zen dude, which might make a traditional meat-and-potatoes man wince. But there’s something else here that’s harder to quantify; there’s a prejudice against the Triangle that goes beyond its technical details. It’s almost as if some people want the Triangle to disappear.

“People will sometimes look at a team and say, ‘Those players won’t work in the Triangle. The Triangle won’t work here.’ And that’s so ridiculous,” Jackson says. “People just have this attitude about the Triangle, like it’s this pariah offense. That’s totally wrong. It just takes a little time.”

If Jackson’s use of the word “pariah” seems overly dramatic, consider this: I spoke with another coach about the Triangle for more than an hour, but only after agreeing our conversation would remain off the record. His reasoning? He fears being perceived as a “Triangle coach” could marginalize his reputation. The conventional wisdom is that coaches who love the Triangle are inflexibly married to its principles and unwilling to adapt to new personnel. Whenever a team using the Triangle struggles, the Triangle absorbs the blame.1 And since so few people really know how (or why) the Triangle works, it becomes a circular criticism. “No matter what I say in this interview,” the coach told me, “nobody will understand this offense. It’s impossible to explain over the phone.”

This is true. Even after conducting these interviews, I’d be lying if I claimed to completely understand how the Triangle is supposed to work. I know the architect of the offense was Tex Winter and that former Bulls assistant Johnny Bach was integral to its adoption in Chicago. I know the base alignment of the Triangle is a human triangle on one side of the floor — a center on the block, a forward at the wing, and a guard in the corner. An explanation of everything else requires a chalkboard and a year of experience. But here’s what our unnamed coach told me:

1. The Triangle is considered a “flow offense,” in which player movement is the most important detail (set plays are rare). It’s also considered a “mirror offense,” because the same things happen on each side of the floor. Neither of these qualities is unique or even uncommon.

2. The strength of the offense is that all five players are interchangeable and that anyone on the floor can occupy the post (assuming that player has the best post matchup).

3. There are passes players are automatically supposed to make if they receive the ball at certain positions on the floor against specific defensive alignments. These decisions are called “automatics” (and those automatics are what the players need to mentally internalize).

When the Bulls ran this offense in the ’90s, the key adaptation Jackson made was moving Scottie Pippen to the top of the key and playing Jordan as a forward (in Los Angeles, he made a similar tweak with Lamar Odom and Bryant). But those players would have succeeded in any offense. The real advantage of the Triangle is what it does for players with less ability. Most NBA sets are static; they require perimeter players to create their own shot, usually off the dribble. The Triangle’s relentless off-the-ball movement allows standing jump shooters to contribute within their own preexisting skill set. This is why it worked so well for John Paxson and Steve Kerr, and even for guys like Sasha Vujacic and Luke Walton. You don’t need four or five athletic scorers to make the Triangle work. Two is plenty, because it amplifies the value of role players.

“When I look at Oklahoma City,” the anonymous coach said, “I see a team that is built to run the Triangle. They are so designed to run the Triangle that it’s almost a joke. Imagine them running a two-man game on the weak side with [Kevin] Durant and [Russell] Westbrook. Who the fuck is gonna stop that?”

In theory, no one. In practice, everyone, because Oklahoma City doesn’t run the Triangle. Nobody does.2 And that reality is more complicated than the offense itself.

When Jackson coached the Albany Patroons, he initially used a flex offense.3 He felt CBA players needed structure. It wasn’t until he became an assistant for Doug Collins in Chicago that he converted to the Triangle.

“When I came to the Bulls, Tex Winter and Johnny Bach were the assistants,” says Jackson. “I was relatively ignorant about NBA offensive systems. Well, maybe not ignorant. But certainly naïve. And Tex4 was a big proponent of his offense. At the time, we were running through a sequence of ineffective point guards. Kyle Macy. Sedale Threatt. Sam Vincent was brought in. Craig Hodges was there. But Tex would always argue that you didn’t need a great point guard to win in the NBA. This idea of the point guard dominating the ball is a relatively new idea in the game of basketball, really. … One of the things that’s pretty obvious [about my coaching career] is that I never had to fight to get a dominant point guard. Because once you do that, defenses can align themselves against that one guy. You can pressure the point guard high on the floor and move the ball away from whomever you want to shut down. That was always my defensive philosophy against people like Isiah Thomas and John Stockton.”

This, it seems, is one of the less reported motives behind Jackson’s affinity for the Triangle: By decreasing the import of the lead guard and having two players share ballhandling duties, the offense’s emphasis was shifted to the baseline. That brand of thinking conflicts with the current NBA climate, in which so many point guards have emerged as high-profile superstars. It also explains why the Triangle met with such resistance in Chicago until Jackson took over in 1989.

“Doug [Collins] had a hard time with the Triangle, because his backdrop as a coach was Hank Iba,5 who coached him in the ’72 Olympics,” Jackson says. “He really believed that the guards should be at half court when a shot was being taken on offense [in order to stop transition], so he didn’t like the idea of a guard being stuck in that corner.”

When asked why the Triangle is disappearing, Jackson suggested that it’s a hard offense for an impatient person to teach to modern athletes: “The problem with the Triangle is that you have to teach the most basic, basic skills: Footwork. Where you stand on the floor. And if you have the kind of player who wants to attack and score every time he touches the ball, he will hurt this offense.” In general, Jackson sees the league imprudently moving away from post-oriented sets: “The game is evolving into a 3-point shooting game. You can’t win a championship with a European offense, like what Phoenix has run for the past few years. But that seems to be the style people are copying. My issue with a team like Miami is always, ‘Who is going to score in the post?’ An interior game is still key, even if you don’t have a high-scoring center. Clearly, that’s what Dallas has with Dirk [Nowitzki], and that was the difference in last year’s championship series.”

It’s fun to talk about the Triangle with Jackson,6 mostly because he’s smart and candid about everything. Yet it’s possible that this willingness to express unvarnished opinions is part of the reason the Triangle is dying: Jackson is widely viewed as arrogant. He engenders jealousy among his rivals (and seems to enjoy doing so). His acolytes are few and far between. Unlike most coaches who’ve had major success, he hasn’t spawned a significant coaching tree of former assistants — his only real tentacles into the league have been recently fired Timberwolves coach Kurt Rambis and ex-Mavs coach Jim Cleamons (currently working in China). Neither ran the Triangle in totality. Jackson’s NBA impact has been massive, but his ongoing influence will be muted. It appears that he will not be remembered as the NBA coach who ran the Triangle best; in all likelihood, he will be remembered as the only NBA coach who ran it at all. If the Triangle truly dies, it dies with him.