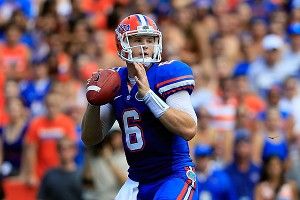 A quick one this week, amigos, with a rundown of the top 10 games and Your Perfect Saturday:

Big Ten fans will be unhappy to see that I chose this one over Michigan-Nebraska, if only because the Big East is starting to look like a pretty interesting race, and Kent State, at 6-1, is on a crash course with Ohio for a MAC East championship game on November 23. It feels like there might be upset potential here, but Kent State’s blowout loss to Kentucky earlier in the season should give you pause.

Fans of schadenfreude and suffering should turn in to watch Carolina. After a depressing setback against Duke last week, the annual loss to State will be more painful than ever. Both teams still have outside shots to win their division.

If you told me 10 years ago that Duke would be playing a mid-season game with Florida State in 2012 that actually had ACC title implications … I would have asked you for the final score so I could make a lot of money. Look, I’m gullible! But most people wouldn’t have believed you. And yet, there’s Duke, yucking it up all alone at the top of the ACC Coastal Division after that incredible 33-30 win over UNC. Will FSU give them a sound whooping? Almost definitely. But this is still heady territory for the Devils, and Duke fans will most certainly enjoy it.

“Oh darn,” I said last week, as Ohio State’s backup quarterback threw an interception with 2:40 left. “I was enjoying that whole Urban Meyer–lives-a-charmed-life story.” The Buckeyes trailed by eight, and their starting QB, Braxton Miller, was in the hospital. So what happened? Meyer gave a positively Meyeresque pep talk, and ole Kenny Guiton came back and led his team to a 29-22 overtime win. Every OSU game is now required viewing. This is the worst 8-0 team in history, but I love them anyway.

That sneaky sound you hear is USC trying to creep into the title race through the backdoor. The formula is simple — beat Oregon next week, beat Notre Dame at the end of the season (hopefully when they’re undefeated), take down Oregon State in the Pac-12 title game, and hope Kansas State loses somewhere along the way. But they have to survive tricky games like this, on the road against a team that can put up a lot of points.

5. Cincinnati at no. 16 Louisville

It’s Friday night, and Louisville is desperately trying to keep its undefeated record. They almost bit it last weekend against South Florida, and Cincinnati is easily a team of that caliber. The winner of this game will likely challenge Rutgers for the Big East title and a BCS shellacking.

I want people to note that I was on the Kleinapple Express Heisman train before anyone. I’m the damn conductor of that train. Seriously, I want some credit. Hey, where’s everyone going?

What is it about Mark Richt that makes me enjoy watching him lose? He seems like such a nice man. It must be that my soul is impure. Anyway, Jeff Driskel will throw 19 touchdown passes in this game.

The worst part about Alabama’s dominance is that games like these, which look awesome on paper (two undefeated teams! SEC West implications!) end up as blowouts. Damn you, Nick Saban. I’m going to pronounce your name suh-BAHN from now on to make you sound like a French intellectual. It’s my only weapon.

Count me as one of the idiots who thought Tommy Rees should be Notre Dame’s starting quarterback. I think we saw pretty clearly what happens when you lose Everett Golson’s mobility against BYU, and man, are the Irish going to need mobility against Oklahoma. The Sooners are another team that could slip their way into the national title hunt despite a home loss to Kansas State, but the big problem there is the lack of a Big 12 championship game. They would need a lot of help.

Have a remote and a computer handy. All times are Eastern.

We’re back to the days of crap games in the noon slot.