Why MLS Cracks Down on Homophobia Harder Than Any Other League 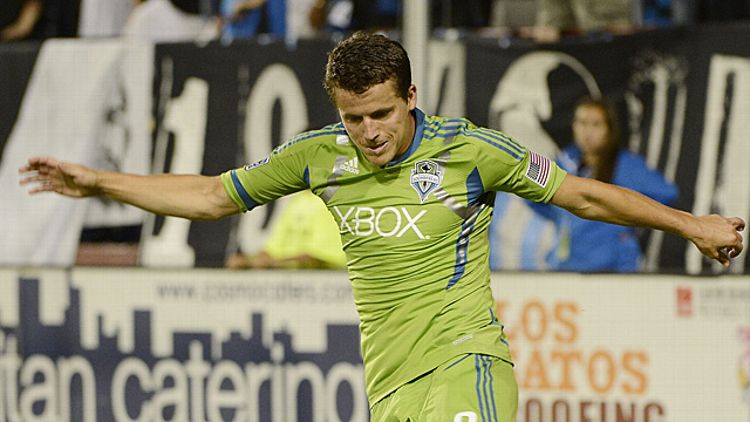 Last Thursday, in the waning moments of the Seattle Sounders’ playoff victory over Real Salt Lake, left back Marc Burch was caught on camera calling an opposing Real player a “f—-t.” (Fair warning: Links to YouTube clips in this piece might not be suitable for your workplace.) The follow-up from Burch was immediate: a seemingly heartfelt letter of apology. The response from MLS commissioner Don Garber was just as swift: an undisclosed fine, an order that Burch attend sensitivity training, and a three-game suspension that effectively ended his season.

When a league fines or suspends a player for saying something it considers inappropriate, it’s not just levying a penalty, it’s also making a wager. A bet that a certain dollar amount or number of games will convince its fans and other interested parties that it takes the slur seriously.

By that logic, all four of America’s largest leagues — the NFL, the NBA, MLB, and the NHL — have long gambled on the idea that their fans aren’t overly concerned about players using homophobic language. The only professional league that seems to take seriously the risk that gay slurs will alienate its biggest supporters is also the country’s youngest: Major League Soccer.

For those who’ve been paying attention, the Burch suspension wasn’t a surprise. Earlier this year, when Houston Dynamo midfielder Colin Clark was caught calling a Sounders ball boy a “fucking f—-t,” he received the same fine. But though they now could be considered commonplace in MLS, Clark and Burch’s suspensions remain an outlier in other professional sports.

In April 2011, a TNT camera caught Kobe Bryant yelling “fucking f—-t” at referee Bennie Adams, who’d just given the Lakers star a technical. After a quick mea culpa, Bryant oddly told a sports radio host that his comments “should not be taken literally.” Commissioner David Stern’s judgment — a $100,000 fine — may seem like a fortune to most, but it was pocket change to Bryant. It represented just .04 percent of his salary that season (a league-leading $24.8 million), came with no suspensions, and was appealed. (A spokesman for the NBA Players Association refused to say what came of that appeal.)

In July of that same year, Philadelphia Eagles wide receiver DeSean Jackson told a caller on a radio show that he was a “gay-ass f—-t.” And though commissioner Roger Goodell hasn’t been shy about rendering harsh, unilateral, legally questionable verdicts (see: Bountygate), Jackson wasn’t punished. (It’s worth noting that Jackson’s comments occurred during the lockout.)

Neither was Philadelphia Flyers forward Wayne Simmonds, who allegedly called New York Rangers winger Sean Avery a “fucking f—-t” during a game two months later. The NHL claimed it couldn’t substantiate the slur, something that can’t be said for anyone with access to YouTube and a reasonable ability to lip-read.

Finally, this past September, then Toronto Blue Jays shortstop Yunel Escobar was suspended three games not for anything he said, but for what he wrote on his eyeblack: “TU ERE MARICON,” which roughly translates to “YOU ARE A F—-T.” Escobar’s three-game suspension may seem significant, but the number becomes far less impressive when you consider that a baseball season lasts for 162.

By comparison, Burch was benched for his team’s three most important contests. At the time, before losing to the Los Angeles Galaxy, the Sounders were two games away from the league championship. And his suspension represented nearly one-tenth of MLS’s 34-game season. Had Stern or MLB commissioner Bud Selig used the same math, Bryant would have been forced to sit for eight playoff games, and Escobar 14.

What do all these incidents tell us? First, that when it comes to insults, “f—-t” is a popular insult among 21st-century professional male athletes. These men are competitive. And what their competitive instincts seem to have taught them is that they can gain an edge by calling into question the manliness of their fellow competitors — or, in Bryant’s case, a ref — a job that is most easily accomplished with this one particular insult. The second thing that seems obvious is that no matter what they say, the actions of each commissioner suggest the taunts aren’t taken as seriously in other leagues as they are in the MLS.

Moral judgments about who’s right and who’s wrong could probably fill an hour of blather on talk radio. But they aren’t as interesting as this question: Why is MLS different? Why are its punishments for the same crimes so much harsher than other leagues?

There is no one answer. Commissioner Garber declined to comment, and it’s impossible to know exactly what motivated him to make the call. Yet the best guess comes down to one word: demographics.

Compared to other sports, MLS’s fans are young. This is true whether the evidence is anecdotal — in three years living in Seattle, I can’t ever remember seeing an AARP-qualified Sounders fan — or quantitative: Among Americans between the ages of 12 and 24, pro soccer (both of the MLS variety and otherwise) is the second-most popular sport, behind only the NFL and slightly ahead of the NBA. And it doesn’t take a degree in political science to understand that, generally speaking, the younger you are, the more likely you are to have progressive views on homosexuality, and an intolerance for words that seek to demonize it. Which is part of the reason the MLS’s big PR push this year was a campaign called “Don’t Cross the Line,” a series of smartly produced commercials featuring stars speaking out against the full buffet of discrimination: bullying, sexism, racism, and, most notably for our purposes, homophobia.

“The commissioner is here to run a business,” says a source within the league office who wanted to remain anonymous. “We’re doing what we’re doing because it’s the right thing to do. But we’re also appealing to the millenial generation. According to ESPN’s own numbers, our audience skews younger than anyone but the X Games.”

The real test of that business’s devotion to anti-discrimination rules will come when the MLS’s version of Bryant makes his own scandalous comment. Earlier this year, David Beckham kicked a ball at an opposing player that hit both the player and a referee. For this he was given a yellow card and a one-game suspension, a noticeably lighter penalty than what was then handed down to three other, non-global brands who behaved similarly later in the season, leading some to speculate that he’d been given preferential treatment.

But until that Beckham test comes, all available evidence suggests that MLS will continue to bet on its newly established no-tolerance policy as something that’s both good for business and good for the game. A gamble that no other league seems willing to take.