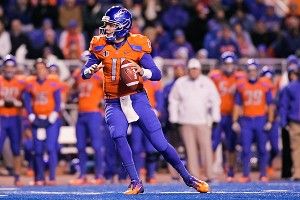 According to the individuals whose job it is to quantify NFL prospects, Brock Osweiler stands six and seven-eighths inches taller than Kellen Moore; according to these same men at Scouts Inc., Osweiler receives an overall “grade” of 87 as a prospect, while Moore gets a 42. This makes perfect sense: If forced to choose between a quarterback who is potentially too tall to play the position and one who is potentially too short, the choice seems obvious. And yet if I were forced to place a thousand-dollar futures bet on which of these quarterbacks will be in the league five years from now, I would probably put my money on the little guy.

This is not just because I have a confirmed reputation as an unabashed Boise State apologist, and this is not because I have anything against Osweiler, who seems like a decent young man with exceptional hair who probably went on many dates at Arizona State. During his visit to Jon Gruden’s dank chamber of “What’s up with that?” film study, Osweiler came across as a polite kid who studies Bartlett’s in his spare time. (“I’m a big quote guy,” he said, and Gruden zinged him with a quote about potential meaning you haven’t done a damn thing yet, and then they had a mesmerizing discussion about pitchforks.) Moore, meanwhile, was a little more reticent with Gruden, which prompted a Grantland-employed friend (hint: His name rhymes with “Muck Mosterman”) to goad me, via text message: “Kellen Moore will not make it in the NFL. No charisma.”

It’s true that Moore does not have the charm of Robert Griffin III or the goofy intellectual aura of Andrew Luck or the route-running ability of Ryan Tannehill or the Alpha Beta coiffure of Osweiler; he is married, and studying for his graduate degree in kinesiology, and he played for Boise State, which wouldn’t make any difference if he were six and seven-eighths inches taller, but makes a difference because he doesn’t look like an NFL quarterback in the first place. Never mind that Moore has always defied expectations: He’s one of the most accurate throwers and prolific winners in college football history; he elevated Boise into a perennial national contender; he picked apart the fifth-ranked defense in the country in last year’s season opener against Georgia. Scouts Inc. ranks him second (behind Luck) in “mental makeup,” but he just doesn’t feel like a guy who’s built for pro football. “Let’s face it, the no. 1 job of a scout is to keep your job so you can feed your wife and kids,” Moore’s father, a high school coach, told USA Today. “If you pick a 6-5 quarterback and you make a mistake, you probably won’t get fired. If you take a chance on a 6-foot quarterback, you’re taking much more of a risk.”

All this is understandable human behavior, and all this is the reason why Moore will probably slip to the late rounds of the draft, when Osweiler and Brandon Weeden and Kirk Cousins and Nick Foles and Russell Wilson and the other second-tier quarterbacks (behind Griffin and Luck) are already gone. The odds that any of those prospects — including Moore — will become All-Pro quarterbacks are slim; everyone who gets drafted late now points to Tom Brady, and everyone who is too small now points to Drew Brees, but those are once-in-a-generation exceptions to the rule.