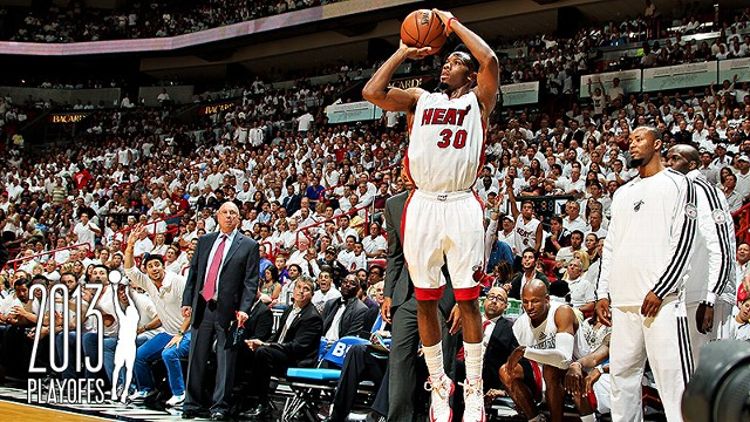 Who Is He? Norris Cole.

Where Is He From? Cleveland State.

His Game in 25 Words or Fewer: Quick point guard who’s struggled as a shooter and turned the ball over too much. Adequate on-ball defender, but fouls too often.

Best Wikipedia Tidbit: After moving through all the typical basketball banalities, the “Personal” section provides a couple solid candidates:

Best YouTube Clip? I have no idea why embedding is disabled for this video, because we should be doing everything we can do share it with the world. Here’s a rundown — LeBron and Norris Cole, at a season ticket holders’ event, dancing to “Superstition” while playing one of those Guitar Hero–but–dancing games. My main takeaway is that LeBron clearly owns this game and plays it all the time. I’m also sort of confused about why there’s an MC trying to hype this up like it’s a Rucker game.

I feel comfortable using this only because he got up so quickly. Although I guess that’s because his face literally bounced off the floor.

In his senior season at Cleveland State, Cole averaged 21.7 points per game, an impressive number even against lesser competition. Much of his damage, as you can see above, came via the pick-and-roll and him pushing the ball in transition. Joseph Treutlein of DraftExpress was just about dead-on in every bit of his evaluation of Cole following his final college game. He never shot the ball at a high level in college, his frame raised some questions about an ability to finish at the rim, and he’d developed into a solid one-on-one defender. Cole relied mostly on a combination of changing speeds and savvy to get to the rim, and his handle of both the ball and a half-court offense in college makes his turnover numbers in the NBA somewhat surprising. It should also be noted that Cole has been sporting the high-top fade since college.

Best Tweet: Let’s start with the basics. Cole’s Twitter name is “NoNo,” his handle is @PG30_MIA, and he has no bio. I’m in favor of all these things. Cole tweets sparingly — except when it comes to big-time sporting events. Everyone live-tweets the Super Bowl, but Norris Cole was really into last year’s Olympics. And I’m not talking about the stuff everyone’s into. I’m talking about judo.

Also, like all people I’d ever be interested in having a conversation with, Norris Cole loves Coming to America.

Meanest Tweet @: There’s probably something from an early-season game where he went 3-for-12 and turned over the ball a few times, but after scrolling through literally thousands of marriage proposals, claims of a Big Four, and talk about how the Bulls just can’t stop Norris Cole, I got frustrated and gave up.

Is He Saber-Friendly? Normally? No. For this season as a whole, Cole struggled with many of the same things he had problems with as a rookie. His turnovers per 36 minutes decreased by 0.6, but that’s only because his usage rate also dropped considerably, from 21.8 percent to 17.0 percent. His turnover percentage actually increased, from 17.7 to 18.4, while his assist rate, already notably low, decreased.

As a scorer, Cole improved, but there wasn’t really any place to go but up. His True Shooting percentage for the year was 48.3, still well below the league average, even though his performance from 3 increased by nearly eight percentage points (to 35.7) from his rookie year. One culprit is free throw shooting. Cole shot just 65 percent on his 80 attempts, 17 percentage points less than than his career figure at Cleveland State and 12 percentage points worse than last year. He also struggles to score when he does get into the lane. Cole converted on less than half his shots inside of 8 feet, below the league average and an issue for someone without a reliable 3-point shot.

Miami was better offensively and defensively without Cole in the game. Offensively, the Heat’s points per 100 possessions fell by seven points, and defensively, they were more than four points better. A big reason for that, though, is who wasn’t on the floor when Cole was. Any lineup without LeBron James is bound to perform worse, and an average of 11 of Cole’s 19 minutes per game came without James on the court.

Should We Know Him? Apparently so, because in these playoffs, not many of his saber struggles have mattered. Cole has lit up the Bulls in both of Miami’s wins, and his shot chart for the playoffs is just silly. He hit his first eight 3s of the postseason, and several of them came in huge spots.

There’s a chance that Cole’s performance from 3 is an aberration, but looking at his numbers as the season’s gone on, he has improved. Cole shot 46.7 percent from 3 after the All-Star break after shooting just 26.4 percent before it. As a point guard on this team, the ability to shoot from the outside is paramount, and if Cole can continue this type of performance while providing the defense he has in this series, the minutes will be there. By several accounts, Cole is a hard-working guy who’s interested in improving his game. It’ll take some time to see if this playoff stretch is the product of that work or a random spike (as most of these things are, it’s probably somewhere in between), but right now, he’s giving the Heat a huge lift when they’ve needed one.