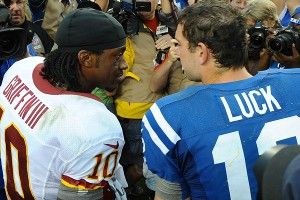 The arrival of Andrew Luck and Robert Griffin III into the National Football League could not have gone much more swimmingly. In fact, while expectations were high for the top two picks in the 2012 draft, it’s arguable that they’ve both exceeded whatever lofty expectations they rode in on over the summer. Luck is leading a team that went 2-14 last season on an improbable playoff run in the AFC South, while RG3 has become the league’s most exciting player and might even be the best player in the NFC East this year. Fans of the Colts and Redskins — and good football — have to be ecstatic at what their respective organizations are set up to do over the next 15 years.

Which one is the Offensive Rookie of the Year? Since they’re about to spend the next 15 years being compared with each other to figure out which player from the Class of 2012 is the more dominant quarterback, there’s no reason for that to start any later than now.

I think the best way to figure that out is to make a case for each player from the perspective of his campaign, see whose case makes more sense and is easier to argue, and put that player in the lead with five games to go. Since I’ve spent the week hearing from just about every Giants fan I know that they’re terrified to play RG3 this Monday night, let’s start with him.

The Case for RG3

1. The Numbers To an extent that I don’t think people realize, Robert Griffin’s numbers as a quarterback — of any vintage — are ridiculous. Compared to Luck statistically, Griffin looks like an entirely different player.

Those are truly staggering differences. Luck looks like your typical above-average rookie quarterback, a talented player prone to mental mistakes and forcing throws at the wrong times. His rookie year is not much different from that of the franchise quarterback he succeeded in Indianapolis; in 1998, Peyton Manning led the league in interceptions (28) in his up-and-down rookie campaign.

Griffin’s performance is basically unprecedented for a rookie quarterback. Pro-football-reference.com uses index statistics that compare a player’s performance to the league averages for a quarterback during the season(s) in questions to see how they performed in the context of their day; by those measures, Griffin has the second-best era-adjusted completion percentage for a rookie quarterback with 200 attempts or more, narrowly trailing Ben Roethlisberger. He’s fourth in yards per attempt, with only Roethlisberger, Marc Bulger, and Mark Rypien ahead of him (and the latter two were playing after a year or more of sitting on the bench).

The only rookie quarterback since the merger to throw interceptions less frequently or have a better quarterback rating than Griffin, again adjusted for era, is Dan Marino. So, basically, RG3 is right up there with Marino and Roethlisberger as the most statistically impressive rookie quarterback in NFL history — and that doesn’t even take into account his impact as a rusher.

2. He’s Had No Receivers Despite Washington’s best efforts to spend money this offseason and procure RG3 some weapons to throw to, their receiving corps has fallen apart this year. After shelling out big bucks for Pierre Garcon and seeing him catch that long touchdown pass from RG3 against the Saints in Week 1, Garcon’s been injured virtually all season. Josh Morgan has been more notable for costing Washington their game against the Rams than for anything else, and Fred Davis tore his Achilles and is done for the year.

Washington’s leading receivers are 33-year-old backup Santana Moss, 2011 third-rounder Leonard Hankerson, Morgan, and 2011 sixth-rounder Aldrick Robinson. Backup tight end Logan Paulsen has taken over for Davis. If Griffin were really struggling this year, we’d be looking at his receiving corps and saying that he didn’t have anything to work with, just like we did with Blaine Gabbert in Jacksonville. Instead, he’s been brilliant with these very same players.

3. He’s Captured the Cultural Zeitgeist We would be naive to ignore that RG3 has become a phenomenon in a way that few young quarterbacks have, especially during their rookie seasons. Washington has a way of turning their star athletes (or their Nick Youngs) into larger-than-life figures, but Griffin would be a superstar in any market. Without a truly dominant team or a player running away with the MVP this year, Griffin’s arguably become the biggest story in football. That shouldn’t be enough for him to win the award on its own, but it absolutely means something in terms of his case.

The Case for Andrew Luck

1. He’s the Big Winner Luck’s statistics don’t compare to Griffin’s, but he’s been part of a revolutionized organization that looks to be headed to the playoffs. After going 2-14 a year ago, the Colts are now 7-4 and almost surely on their way to a stunning wild-card berth. The Colts made other changes in their lineup and brought in a new coaching staff this offseason, but it’s clear that the biggest difference between last year’s team and this year’s model is the gap between Curtis Painter and Andrew Luck. While Griffin’s Redskins have as many wins now (five) as they did all of last season, they have just a one-in-five shot of making the playoffs.

2. Luck Has Won With Less While Griffin’s receiving corps is a group of nobodies, Luck has virtually nothing to work with short of Reggie Wayne. Outside of Wayne, Luck’s targets have been rookie third-rounders T.Y. Hilton and Dwayne Allen, along with Rams castoff Donnie Avery and injured second-rounder Coby Fleener. His running game has been virtually nonexistent; while Griffin has enjoyed the services of breakout star Alfred Morris on the ground, Luck has been saddled with the combination of Vick Ballard and Donald Brown. In fact, while Griffin has done far more cumulative work as a runner, Luck has been incredibly efficient in his scrambles. He has five rushing touchdowns, which is more than the rest of his team combined.

Furthermore, while their schedule masks the pain, Indianapolis’s defense is truly bad. They’re 22nd in points allowed, and the only teams they’ve been able to hold under 20 points are the Jaguars, Bills, Titans, and Browns. In terms of advanced metrics, the Indianapolis defense is last in the league in defensive DVOA, and they’re not good at anything, since they’re 31st against the pass and 32nd against the run. You can argue that there’s certainly talent there, since Robert Mathis and Dwight Freeney are on the roster, but virtually every impact name on Indianapolis’s defense has missed their fair share of time this season, and Luck has been forced to lead the team to victories without them.

3. He’s the Leader Had he struggled, it would have been extremely easy to give Luck a writeoff for this 2012 season. Turning around a 2-14 team is hard enough, but once Colts head coach Chuck Pagano was forced to leave the team to undergo leukemia treatment, it would have been totally understandable if a young, talent-poor team treaded water or regressed in his absence. Instead, the team has rallied around their coach, and Luck has become the team’s de facto leader in the process.

There’s absolutely no reason to criticize Griffin for taking on several endorsement campaigns before and during his rookie season, but I wouldn’t be surprised to learn that Luck left endorsement money on the table so he could shave his head in support of his coach. He’s not just the face of the franchise; he’s its unquestioned leader in a time of serious adversity, too.

And the Winner Is …

I certainly don’t think that this is a finished race for Rookie of the Year, and I think there are extenuating circumstances that make the case less cut-and-dried on either side, but if the question is simply “Which of these two players has performed better this year?” I think the evidence pretty clearly points to Robert Griffin III. I’m not a slave to statistics when it comes to measuring an individual player’s performance — the individual stats in football just aren’t good enough to trust them that implicitly, whether they’re old-school stats or advanced ones — but the difference between the two players in that table above is pretty stark. If there were plenty of soft factors pointing toward Luck that Griffin didn’t have any reply to, I think it would be fair to call it a toss-up, but Griffin has spent the year throwing to backups and has the lowly Redskins in sight of .500, even if they fall short of the playoffs. I suspect that people who are more wowed with quarterback wins as a stat will see Luck earning a likely playoff appearance and punch him in as Rookie of the Year without giving the idea much further thought, but given each player’s contributions to their team, a wild-card berth just isn’t enough for me to ignore the chasm in performance between the two players. Barring a notable collapse from Griffin and a five-game stretch of brilliance from Luck, I think RG3 is going to be the deserving Offensive Rookie of the Year.