Who Are Those Guys? DeMarre Carroll and Mike Scott! 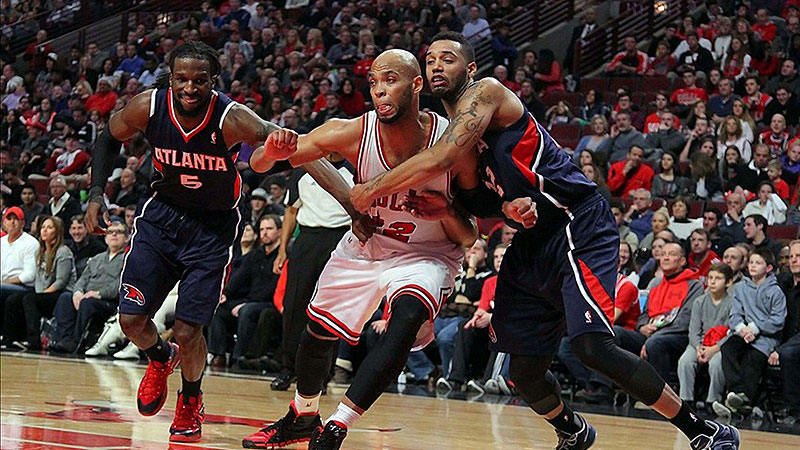 Who Are They? Mike Scott and DeMarre Carroll of the Atlanta Hawks!

Where Are They From? The South. Scott is from Chesapeake, Virginia. Carroll is from Birmingham, Alabama. Carroll spent his first two years of college at Vanderbilt, from 2004 to 2006, before transferring to Mizzou in 2007, where he played for two years. Scott played for Virginia from 2007 to 2012, earning a medical redshirt for the 2010-11 season.

Years Played: Carroll is playing his fifth season in the NBA; Scott is in his second.

Scott’s Game in 25 Words or Fewer: Undersize 4 with scorer’s mentality. Can post and face up. Given the green light to launch 3s this season, has not wasted that opportunity.

Carroll’s Game in 25 Words or Fewer: A “3-and-D” swingman full of energy and hustle. Was given the nickname “Junkyard Dog.” It’s not original, but sums up his game well.

Bio Tidbits: In 2007, Carroll was shot in the ankle outside of a nightclub. He was also diagnosed with liver disease, which might require a liver transplant after his playing days are over. Neither of these problems has affected his basketball career, evidently.

Since These Guys Rep Atlanta, What Would Be Their Spirit Young Thug Track? Carroll wears nothing but True Religion, so it’d have to be “My Everythang.”

Scott (who happens to be a Young Thug fan) might suggest “Get TF Out My Face,” by Thug and Rich Homie Quan, but “Twitter Song” reflects his social media awareness, even if he’s more of an Instagram guy.

If Mike Scott Took the Pew Research Center’s “How Millennial Are You?” Quiz, How Millennial Would He Be? Incredibly millennial. He handles his own media requests from a personal Gmail account. Oh, and dude has at least six emojis tattooed on his right arm.

Should We Know Them? Sure! The Hawks have stumbled mightily of late, but it seems likely that they will make the playoffs even after a disastrous eight-game losing streak. The streak ended with this past weekend’s impressive win against the Knicks. It served as a statement for a 2013-14 Hawks team that has played nearly half the season without Al Horford. At their best, the Hawks give off a similar vibe as the post-Melo, pre-Shaw Denver Nuggets, that kind of utopian NBA team that is capable of winning games without any one player as the dominant figurehead. Carroll (24 points on 8-of-14 shooting) and Scott (30 points on 11-of-14 shooting) both went off for career highs in that game, a common occurrence for athletes playing against the Knicks this season.

Since Horford went down with another torn pectoral muscle in late December, Scott has been entrusted with the spark-plug role off the bench, rare for a 6-foot-8 power forward without all-world athleticism. In that time frame, Scott has shot better than 50 percent from the field and 41 percent from 3 on more than three attempts a game. The numbers are even better in the four games since the All-Star break, where he’s averaging nearly 17 points a game on 61.4 percent shooting from the field and 64.3 percent shooting from 3. Scott is largely a product of Kevin Love’s success. Minnesota’s undersize, largely floorbound stretch-4 has inspired and enabled teams like the Hawks and Celtics to maximize the skill sets of their undersize bigs. Scott, who only attempted one 3 for Atlanta as a rookie (he missed), is now taking two and a half per game. It’s the best thing that could’ve happened for him.

Carroll’s performance against the Knicks is only the latest highlight in what’s been an outstanding 2014. Since January, Carroll has averaged more than 13.3 points, 5.4 rebounds, and two assists, with nearly two steals, while shooting 52.8 percent from the field and 42.3 percent from 3. Carroll, who has played on five teams in as many seasons, stepped into a depleted wing rotation and has soared above and beyond. (Check the birdplay!) The Hawks are all stepping up to fill the void left by Horford, and Carroll has put it upon himself to do as much as possible for his team. After the Knicks game, he told Hawks blogger Bo Churney, “I’m trying to develop into a leader, because I think that’s what we’re really missing on this team.” He’s been a fan favorite at every stop, both for his motor on the floor and his willingness to engage with the community off it. Last year in Utah, he invited fans to join him and his cousins for a night of bowling and pizza. What a guy.