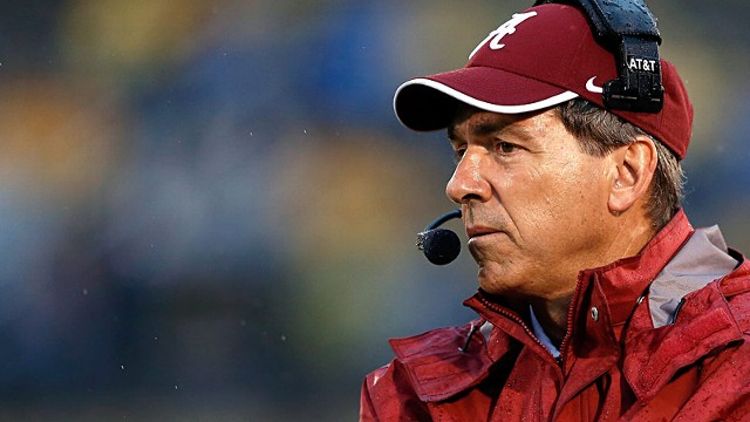 If I learned anything from The Grey, it’s that inevitable doom can be a big help with self-reflection. That’s why as I sat on my couch Saturday afternoon, waiting for Nick Saban to dismember my alma mater’s football team, I started thinking about how exactly it was that we got here. My four years at the University of Missouri were the most successful in the football program’s history. From 2006 to 2009, Mizzou won 38 games. In 2007, they spent a week as the no. 1 team in the nation. From 2009 to 2011, only Alabama produced more first-round picks than the Tigers. Still, when the dust from The Great Realignment Shakedown of 2010 cleared, and the Big 12 powers found their respective dance partners, Missouri was left at home, alone, in sweatpants.

The doomsday scenario of everyone bolting for the Pac-36, or whatever it’d be, never played out. Texas stayed, and in turn, kept the future of the Big 12 subject to its whims. Publicly, there was a united front among the remaining schools to keep the conference strong and intact. Privately, it was hard for Mizzou to forget that feeling of debilitating loneliness. So when Texas A&M jumped to the SEC for some stability and middle-child attention-grabbing, Missouri followed close behind. At the time, it all made sense. But Saturday afternoon, as I watched Alabama run out onto Faurot Field, I couldn’t help but picture old friends Saban and Gary Pinkel sitting in a Columbia hotel room, the former with a psychotic smirk on his face, asking Pinkel, “If the road you followed brought you to this, of what use was the road?”

About half an hour or so before kickoff, I made myself a Bloody Mary and invited two Mizzou friends over to watch. I figured if I were going to do this, it’d be best to do it not-entirely sober and with some company. The Tide got the ball first, and before anyone had gotten to my place and before I’d gotten halfway through my drink, Eddie Lacy went 73 yards off right tackle, and with 14 minutes left in the first quarter, it was already 7-0. Soon, my friend Ricky arrived, and described the desire to watch the game as well as anyone possibly could: “The reason I’m watching this is the same reason that if we were in the Old West, I’d go see a hangin’.” He’d been there for a few minutes before he noticed the apt cable description of whatever it was we were watching (“game” doesn’t seem appropriate): “A beaten-up Tiger offense squares off with one of the nation’s top defensive units.” CBS was apologizing before the game started.

Last year, Alabama and its NFL defense used a very simple formula to get to the national championship. The team they were playing was not going to score, and eventually, Trent Richardson would. This season, quarterback AJ McCarron’s shackles were loosened in his second year as a starter, to the point that he was one of the names grouped below Geno Smith in conversations about the Heisman Trophy. Saturday, there wasn’t much need for any of that fancy passing stuff. As the first quarter reached its final minute, the Tide had three touchdowns on the ground and were up 21-0. Shortly after, Missouri’s freshman (and backup) quarterback Corbin Berkstresser attempted to end the life of his running back with a late pitch. The ball hit the turf, and even after a Mizzou recovery, the camera flashed to a girl in the stands, wearing a yellow poncho in a driving rain, looking as sad as I’ve ever seen anyone look. A bit later Bama running back T.J. Yeldon leaped 15 feet into the end zone to make it 28-0, and then a crack of thunder sent the referee to midfield. “The game is being suspended due to lightning strikes,” he said. It sure was.

The carnage subsided a bit after the delay. Mizzou returned the ensuing kickoff for a touchdown, much to the excitement of the 37 or so people left in the stadium. That wasn’t enough to garner much hope, but the Bama fumble on their next possession was. The fumble was followed by a three-and-out. An Alabama botched punt snap deep in their own territory was rendered moot by a sack-fumble soon after. Mizzou managed a field goal early in the third, but those would be the Tigers’ last points. The Tide rolled to another touchdown in the fourth to make it 35-10. At one point in the final frame, the rushing yardage total stood at 301 to -7. Berkstresser, who was replacing oft-injured starter James Franklin, finished 12-for-29 with 126 yards and two interceptions.

The backup quarterback didn’t help, but the afternoon was similar to Mizzou’s trip to South Carolina earlier this season in how it informed my understanding of the SEC. Even as the ball bounced Missouri’s way from time to time, short fields and big breaks didn’t seem to matter. Here, where they play this grown-man football, the offense can’t save you. Enjoy every yard. Because they’re not coming easy.

Midway through the fourth, CBS sideline reporter Tracy Wolfson gave a report from the ground. The gist was that her socks were wet and she was excited to get home. I think that went for everyone at Memorial Stadium on Saturday afternoon — well, save Nick Saban. Up 42-10 with a couple minutes left, the camera panned to the livid, soaked coach tearing into someone after a personal foul. I miss the Big 12.