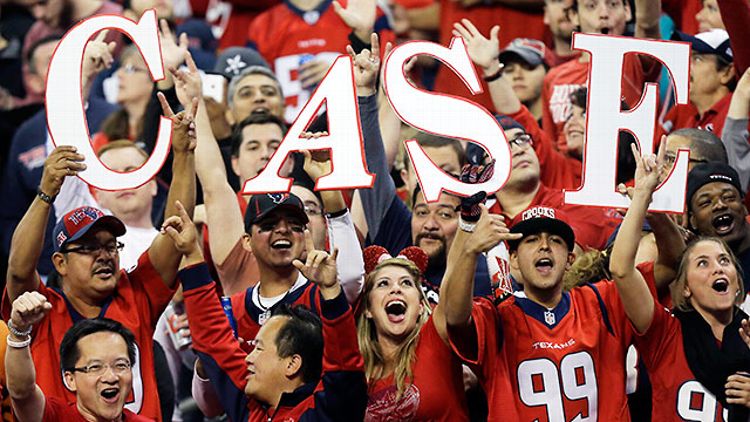 As the days grow shorter, my fantasy team’s playoff hopes grow slimmer. The trade deadline is a week from tomorrow, and as I begin to accept my squad’s doomed fate, I’m faced with an ethical dilemma for the ages. Do I unload my few remaining healthy studs — Cam Newton, Matt Forte, and Josh Gordon — to my leaguemates for next to nothing and money on the side, or is my dignity more important? I’m leaning toward the former, but only because I really don’t want the dude currently in first place to win our league. That makes it OK, right? Good.

As I continue to ponder this question, here is your definitive Week 10 preview.

1. QB Case Keenum, Houston Texans: Houston’s only healthy running back isn’t a deceased former NBA player or a longtime fiction writer, but he might as well be. With Arian Foster looking unlikely to play amid nagging back issues and Ben Tate’s four broken ribs making it hard for him to “breathe and laugh” — which is especially problematic now that Wade Phillips is the interim head coach — the Texans are left counting on some dude named Dennis Johnson to run the ball against Football Outsiders’ top-ranked defense.

Keenum has to face that same defense, but he can stand up straight and properly inhale, making him a better weapon than anyone else in the Texans’ backfield. Accordingly, expect offensive coordinator Rick Dennison to really lean on the passing game, which should eliminate fantasy owners’ qualms about Keenum’s tough matchup. Still available in 92 percent of ESPN.com leagues, Keenum is a solid Tom Brady or Aaron Rodgers replacement in Week 10.

• Those 51 points would rank 27th among kickers, tied with the Texans’ Randy Bullock, who’s far and away the worst player in the NFL according to Google News.

• With one more touchdown pass against Oakland, Nick Foles would’ve surpassed the 51-point mark in a single afternoon.

• Perhaps most damningly, Richardson has scored only 47 more points than Mark Ingram. (For the mathematically challenged, that means Ingram has notched four fantasy points in 2013. ROLL TIDE.)

So, yeah, unless your name is Ray Rice, you’ve probably had a more productive year than Trent Richardson. Moreover, with four consecutive games of five points or fewer, Richardson certainly isn’t showing any outward signs of improvement. For the first time in his professional career, Donald Brown isn’t the worst former first-round pick in his backfield.

And yet … I can’t shake the feeling that Richardson is going to have a decent outing sooner or later, if only thanks to the law of averages. Despite his struggles, he’s seen double-digit carries all but once this season, and Week 9’s three targets gave owners hope that he’ll become more of a factor in Indy’s passing game as well. The Rams are coming off a game in which they surrendered 49 rushing points to the Titans, including 11 to the lowly Shonn Greene, so this is as good of an opportunity as any for Richardson to deliver an expectation-shattering performance. Granted, at this point, 70 yards and a touchdown would constitute an expectation-shattering performance for T-Rich, but his owners would surely be elated with such a stat line.

3. Titans D/ST: Chad Henne against Alterraun Verner. A Justin Blackmon–less Jaguars offense against a Titans defense that has forced multiple turnovers in six of its eight games. Maurice Jones-Drew against the passage of time. The second-worst offensive line in the league against Jurrell Casey. Shahid Khan’s mustache against the ghost of Bud Adams.

There’s a reason the Titans D/ST was the most added player/unit in fantasy this week, and it’s not because of Karl Klug’s sizable fan base. In fact, the Titans D/ST is now owned in 66.6 percent of ESPN.com leagues, which is fitting, since the unit will more or less perform a satanic ritual on Henne. (Bernard Pollard’s an expert.) More importantly, with the Chiefs on a bye, the Titans could easily be Week 10’s highest-scoring defense.

1. QB Seneca Wallace, Green Bay Packers: I realize that most owners aren’t going to fall for Wallace, but I still feel compelled to make sure you all know that SENECA WALLACE IS NOT A VIABLE FANTASY OPTION WHATSOEVER, EVEN IN TWO-QB LEAGUES. There’s no chance of a Matt Flynn–versus-the-Lions situation here, not given Wallace’s 6.29 career yards per attempt and constant off-target throws. And with Eddie Lacy blossoming into one of the league’s most effective running backs, Mike McCarthy would be wise to completely avoid the forward pass. If McCarthy gives in, though, avert your eyes.

2. RB Lamar Miller, Miami Dolphins: Over the past two weeks, Miller has rushed for 194 yards and 20 fantasy points, and suddenly he’s being treated as a legitimate RB2. This is some bullshit. It’s also an aberration.

First of all, these performances came against two teams (New England and Cincinnati) with decimated defensive lines, whereas this week’s opponent (Tampa Bay) boasts a healthy D-line and a stout run defense. Second of all, while it’s impossible to predict what overall effect the Incognito-Martin saga will have on the Dolphins, losing two starting offensive linemen is never a good thing for the run game. Anticipate a return to low-end flex numbers for Miller.

3. TE Julius Thomas, Denver Broncos: The Chargers have been absolutely abysmal against opposing receivers this year, and they haven’t even played the Broncos yet. They finally host Denver on Sunday in a matchup that’ll surely exacerbate these horrendous stats: San Diego is 28th in the league against WR1s, 31st against WR2s, and 31st against other receivers. It’s safe to assume that every member of the Broncos’ receiving corps — even tiny ol’ Trindon Holliday — will scorch the earth in San Diego until Qualcomm Stadium is a pile of ash and rubble.

However … the Chargers have held their own against opposing tight ends, not allowing a touchdown to one since the opener. Considering how consistently open Denver’s receivers should be, a relatively unproductive day seems inevitable for Thomas, especially as he battles a mild ankle sprain. If nothing else, though, we can still support Thomas in his disdain for certain foodstuffs:

Can someone please explain why the Vikings are the NFL’s prime-time darlings this year? And why the schedule maker responsible for this atrocity hasn’t yet been fired? After tonight’s game, the Vikings will have pulled off the Monday Night Football–Sunday Night Football–Thursday Night Football trifecta in a matter of four weeks, which has to be some kind of record. I mean, Adrian Peterson’s exciting and all, but the rest of the team …

But while the Vikings certainly don’t deserve this unremitting national spotlight, they are perfectly capable of scoring fantasy points in droves when faced with a softball matchup. Enter the Redskins, who surrender more points to opposing running backs than any other team. Peterson could easily annihilate this group for 200 yards and two touchdowns. Moreover, as ridiculous as it sounds, Christian Ponder is an acceptable Brady fill-in/QB2 given this matchup. It might go against every fiber of your being to start Ponder, but I promise you won’t be disappointed. (Of course, come next week, Ponder had better be far, far away from your roster.) Hell, Greg Jennings might even make an appearance tonight! WHO’S TO SAY CORDARRELLE PATTERSON WON’T TAKE ANOTHER KICKOFF TO THE HOUSE? The possibilities are truly endless against Washington’s feeble D.

Now, I still expect the Skins to win by two-plus touchdowns, because while the Redskins have a terrible defense, the Vikings have a terrible team. RG3 will see plenty of garbage-time action, and that’s where he’s made his biggest mark this season. And while I have no way of predicting which one it’ll be, some Redskins tailback/halfback/fullback/H-back/slotback will rush for multiple touchdowns. There’s no reason to think Pierre Garcon can’t follow up last week’s 172-yard performance with something similarly spectacular, and hell, if Jason Witten just scored 16 fantasy points against the Vikings, why can’t Jordan Reed? The only thing this game will lack is a walk-off safety.

NO, THAT IS NOT ERIC DICKERSON.

Welcome to 2013, where Zac Stacy is a fantasy stud. Please don’t be alarmed to see Mr. Stacy’s name ahead of Frank Gore’s or C.J. Spiller’s on the Week 10 rankings; this was bound to happen as soon as Kellen Clemens became the Rams’ starting quarterback, because, of course, Kellen Clemens isn’t really a starting quarterback. He’s a slow-moving, battery-operated action figure whose only ability is handing off to someone far more skilled than he is. And frankly, he’s pretty good at it.

The Rams have played consecutive close games against clearly superior opponents by feeding Stacy with 26 and 27 carries, respectively. The Colts are up next, and they’re also clearly superior, so an extra-hefty dose of Stacy might be the Rams’ only hope. His prospective workload alone should vault Stacy into top-five RB territory this week.

• RB Rashard Mendenhall, Arizona Cardinals (owned in 77.4 percent of ESPN.com leagues): Bruce Arians expects Andre Ellington to max out at 15-20 carries per game, which means there should be a role for Mendenhall in Arizona’s offense once he returns from a lingering toe injury. Conversely, Mendenhall has been putrid all season, averaging a Richardsonian 3.1 yards per carry, and he lost the starting job to Ellington in just one week. With a reduced workload, Mendenhall doesn’t possess an ounce of fantasy value. Verdict: Cut him, unless your league rewards negative gains.

• WR Jarrett Boykin, Green Bay Packers (53.5 percent): Just look at that game log! Ever since Randall Cobb went down, Boykin has accrued 14 receptions (on 17 targets), 207 yards, a touchdown, and 26 fantasy points. And unlike Cobb, who thrives thanks to speed and finesse, Boykin is a physical beast. However, with James Jones back, owners can’t count on as many targets going Boykin’s way. Oh, and Seneca Wallace plays quarterback like a deer on bath salts.

Verdict: Cut him. The Jones factor doesn’t bother me too much, because Boykin may simply be the better player, but Wallace renders any WR3 valueless in fantasy.

• WR Marques Colston, New Orleans Saints (93.3 percent): You spent a fourth-round pick on him, and he’s too talented not to start producing at some point. Furthermore, he posted solid numbers in Weeks 1-4, so it’s like he’s been MIA for the entire season. However, one-point performances are one-point performances no matter when they come, and Colston has had three of them in a row. Set aside the fact that you invested so much preseason capital in him, because that’s not how winners think. Drew Brees has forgotten about Colston, and so should you. And yet … Verdict: Keep him. I know the last month has been tough, but there isn’t a single widely available receiver with Colston’s week-to-week upside. Just bury him on your bench if you’re that dissatisfied, and wait for him to reemerge.

Inspired by the great Bill Barnwell, we’ve decided to add a weekly feature to keep all the cellar-dwelling owners [sheepishly raises hand] engaged with the fantasy season. This week’s challenge comes to us from @sqaulltimore, who dares you guys to win with Indy’s immortal Griff “Gryffindor” Whalen at WR1. (I realize it technically makes no difference whether he’s at WR1 or WR3, but Griff Whalen at WR1 would be a sight to behold.) Do this thing, tweet me a screenshot of your victory, and we’ll include the most impressive one(s) in next week’s post. I will also be participating.

Good luck! For the record, Grantland is not liable for any damage you or your team may incur from starting Gryffindor Whalen.

Zaza Pachulia Is Buying the Bucks' Court. No, Seriously.

Boogie Gets Busy, Bargs Goes Airborne: A Quick Check-in With the Triangle All-Stars