Zaza Pachulia Is Buying the Bucks’ Court. No, Seriously. 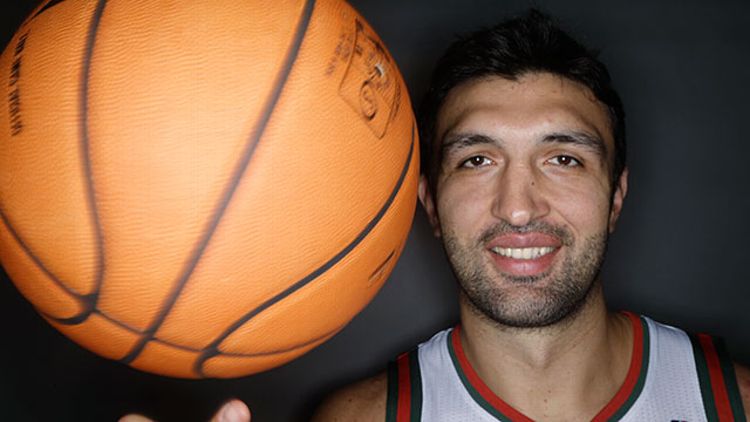 It has been a weird start to the season for the perpetually funky Milwaukee Bucks. Five rotation players are dealing with injuries, including Brandon Knight, the team’s most important offseason acquisition. One of those players, LARRY SANDERS!, is under investigation for his possible role in a nightclub brawl that may have involved people getting hit over the head with bottles.

The team’s marketing and creative group, perhaps the league’s best, installed a brand-new floor intended as an artistic homage to the court used at the MECCA — the Bucks’ old arena. It immediately became the league’s most daring and interesting court design, with two giant, shaded “M‘s” you might miss if you didn’t know they were there.

And then, because these are the Bucks, and the Bucks are funktastic, they had to cut short a preseason game and remove the new floor after players kept slipping on it. The Bucks will resurface the new floor and eventually install it as planned, but they are using last season’s court for now.

The slipperiness has delayed a feel-good ending to the Bucks’ predictably idiosyncratic floor saga: Zaza Pachulia is buying the old one for an undisclosed sum of money, he told Grantland this week. Pachulia plans to donate the old floor to the basketball academy Martve, in Tbilisi, Georgia, where Pachulia learned the game as a kid. (Toko Shengelia of the Nets also played there growing up.) Pachulia began playing there about 20 years ago, and when he went back last summer to conduct a youth clinic, he was surprised to find the same floor, he says. “It’s in really bad shape,” says Pachulia, who hasn’t yet told the school he will be supplying a new floor at some point.

That’s in part because Pachulia hasn’t closed the deal with the team, though everyone involved hopes Pachulia can complete the deal. Pachulia has to buy the floor from the Bradley Center Sports and Entertainment Corporation, not the Bucks, and the two sides are still talking. But everyone is optimistic the floor will end up in Pachulia’s Georgia. Pachulia will allow only cautious optimism, because he tried to work the same deal with the Hawks when Atlanta changed floors a few years ago, only to see things fall through in the end, he says. As soon as he heard the Bucks would switch floors, he asked ownership and his own team of advisers if it might be possible to try again.

“This is my dream,” Pachulia says. “I want to make this happen. It would be really exciting for me, and for the kids in Georgia, to have a chance to play on an NBA floor. So many superstars have played on that court, from the Bucks and other teams.”

Pachulia demurred when asked about possible price points, but a brand-new floor costs $115,000, league officials say. Pachulia jokes that he is angling for a discount, especially since the Bucks have had to continue playing on the floor past its planned expiration date. “As much as it’s being used,” Pachulia says with a laugh, “I have to think the price is going down.” He’s also kicking himself for failing to close the deal early, since he could have made some extra cash loaning the floor to the suddenly floor-strapped Bucks. “I was trying to rent the floor back to them and make some money,” he says.

The deal should close eventually, and Pachulia vows to be at Martve for the grand-opening ceremony. And he has a warning for the next generation of Martve players: “They better take care of the court.”