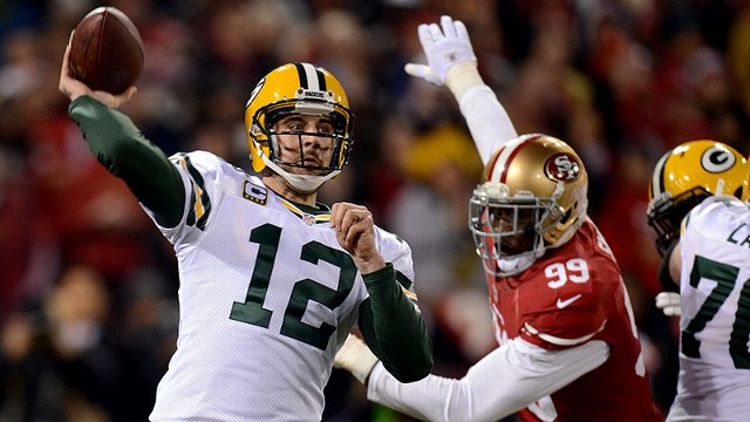 I want to hate Aaron Rodgers. I really do. As a Bears fan, it’s actually my duty, but for whatever reason, I can never muster the requisite anger. Even when I get a chance, like when Greg Jennings was busy filling his Rodgers burn book this summer, I somehow always side with Rodgers. It’s problematic, and quotes like this one don’t help:

That’s Rodgers from Wednesday, talking about whether the 49ers — who passed on Rodgers with the no. 1 overall pick in 2005 — was still a “revenge” game. I’m all for bringing up Tombstone whenever possible, mostly for the peak Kurt Russell mustachery and peak Val Kilmer everything. But here, Rodgers’s words are particularly apt — not only for his situation but for Week 1 across the NFL.

It started last night, when Peyton Manning, Rahim Moore, and the rest of the Broncos were given a chance to avenge their season-ending (cringe-inducing, soul-crushing, city-flattening) loss to Baltimore in last year’s playoffs. It continues all over the league on Sunday, including in San Francisco. Rodgers may not carry a personal vendetta against the Niners anymore (he so does; the Chip on Aaron Rodgers’s Shoulder developed consciousness around 2001), but as a team, the Packers were embarrassed by San Francisco in last year’s divisional round. Other opportunities for possible Week 1 vengeance include:

It’s likely that the Revis trade, Sean Payton’s suspension, and the Cowboys’ o-fer at home will be mentioned in the opening minute of each respective broadcast, and if it weren’t for the quarterback catastrophe in New York, I’d bet each would be the first item mentioned in the run-up to kickoff.

That so many opening-week games would involve a bit of history makes perfect sense. The NFL knows a few things about presenting an intriguing TV product, and the way to inject a story line before a single game has been played is by carrying something over. What better way to keep football rolling than by starting where last season ended.

For those games, that might be reason enough to watch, but for others, we understand that you might need some more convincing. Starting today, the Triangle will feature a weekly viewing guide for the slate of games ahead. Whether it’s an individual battle or a pairing of teams that’s piqued our interest for one reason or another, we’ll be giving you a few things to watch for as you navigate the channel-flipping chaos of the NFL season.

Every week, I’m going to do my best to relate to people who have things they love in this world and recommend one game whose three hours might be better served playing with children, or running errands, or whatever else normal humans might do on a Sunday.

For now, this recommendation will involve the Raiders until further notice. I wish I was kidding when I say that I can’t imagine a single reason to watch the Raiders. Unless Terrelle Pryor turns into 2011 Tim Tebow (awful but magical), the Raiders don’t even provide a twisted sort of entertainment. Pryor will probably be spending most of Sunday afternoon scurrying away from Colts pass-rushers. After already losing starting left tackle (and viable NFL starter) Jared Veldheer to a torn triceps, replacement (and 2013 second-round pick) Menelik Watson missed yesterday’s practice with a knee injury. If Watson misses Sunday’s game, that leaves Khalif Barnes and Tony Pashos as Oakland’s starting tackles, which should thrill all those fans of the 2008 Jaguars.

Plenty of people wondered what the Bears were thinking when they took guard Kyle Long, who started just a handful of games at Oregon, with the 20th overall pick in April. But after a great showing against San Diego in his second preseason game, it looked like Phil Emery might have been onto something. Then the Bears traveled to Oakland, where Long and fellow rookie lineman Jordan Mills rolled over the Raiders defensive line and sent me to a dangerous place where hope and excitement thrive and Jay Cutler is allowed to live without constant fear of being mangled.

The first test of Long’s rookie season will also be his biggest one, as Geno Atkins is indisputably the best defensive tackle in the NFL. The main problem Atkins presents is as a pass-rusher. He had 12.5 sacks a year ago and was actually fourth in the league in hurries, according to Football Outsiders. Those are rare totals for an interior lineman, and by the end of last season, they helped explain the part of Atkins’s game that most fans now know well. What’s less lauded is his talent against the run; Atkins was second among defensive tackles in run stop percentage last season, according to Pro Football Focus. His ability to dominate games really does stretch to every down.

On run plays, Long will likely be involved in a number of double-teams with right tackle Mills, but the Bengals will be doing everything they can to get him alone on the rookie guard on passing downs. If Long can slow Atkins down, Bears fans will know a lot more about what they have in this year’s first-round pick.

Our weekly pick of one player we’ll be going out of our way to watch for at least 10 plays.
David Bakhtiari, T, Green Bay Packers

Last season, the Packers finished 31st in the NFL in Adjusted Sack Rate, and in an effort to protect their $40 million quarterback, Green Bay flipped its offensive line this offseason. That meant moving tackle (and 2011 first-round pick) Bryan Bulaga and Pro Bowl guard Josh Sitton to the left side. The plan lasted until about midway through the first week of training camp, when Green Bay lost Bulaga to a torn ACL.

Replacing him at left tackle is fourth-round rookie David Bahktiari. The Packers had some familiar options available for the left side (2012 starter Marshall Newhouse is still on the roster), but they eventually decided on Bakhtiari. Much like Long, Bakhtiari is being thrown straight to the NFL wolves, as he’ll be lining up across from Aldon Smith in his first NFL start. The rest of the Packers offense (and the rest of the Packers roster) is that of a contender, and whether Bakhtiari can hold his own at left tackle will go a long way in determining just how good Green Bay can be.

My Game of the Week

I’m not sure what would have to happen on Monday night for anyone to be surprised. Have you paid attention to the Eagles this offseason? And we still have no idea what Chip Kelly’s actual offense will look like! Philadelphia could win or lose this game by 50, and I wouldn’t blink.

Really, though, there are more unknown elements in play with this game than in any other. Within the larger scope of Kelly’s offense will be the performance of Michael Vick and a (hopefully) healthy Eagles offensive line. Eight players started up front for the Eagles last season. This year, 2011 Pro Bowl tackle Jason Peters returns, and the Eagles added a right tackle with the fourth overall pick in Lane Johnson. If that group remains intact, the worst part of Philadelphia’s offense from a year ago could be its best.

On defense, the Eagles are moving to a 3-4 defense, and it means new roles for several of their most vital players on that side of the ball. Fletcher Cox looked like a future star at defensive tackle last season, but he’ll be sliding over to play end in the new alignment. Trent Cole, one of the better defensive ends in the league for the past five seasons, is moving to outside linebacker, and that leaves Mychal Kendricks and DeMeco Ryans manning the inside.

For Washington, we know what everyone wants to see: What does a post-injury Robert Griffin look like? When left to his own devices, I don’t expect Griffin to take off any less than he did in his rookie season. The version of RG3 that fans saw last season was already one who’d come back from a torn ACL (suffered during his time at Baylor), and at a certain point, instincts are just that. The difference will be in Mike Shanahan’s willingness to use Griffin as a runner — a vital part of Washington’s success running the ball and consequently, in using play-action a year ago.

No matter how he’s used, part of the excitement surrounding this game, at least for me, is just in seeing Griffin play again. Lost in the arguments about Shanahan’s decision in last year’s playoffs were just how enjoyable Griffin was to watch last year. A healthy RG3 is a godsend for Washington fans, but he’s also pretty damn fun for the rest of us.

The Actual Game of the Week

Revenge talk aside, no game features two better teams than this one. The Packers have had all offseason to solve the read-option and how the 49ers used it against them last year, but Jim Harbaugh and Greg Roman have had just as long to figure out what the next iterations might include.

There are a few areas where the specific matchups between these two teams could tell us a lot about them as we start the year. Without Michael Crabtree, the 49ers are desperate for options in the passing game, and top to bottom, the Packers may have the best secondary in the entire league. Their cornerbacks — Tramon Williams, Sam Shields, and Casey Hayward — can compare to any other trio in the NFL, and we may know early on just how badly Kaepernick can struggle without his best receiver.

The same might be true for San Francisco’s secondary as it attempts to combat Green Bay’s starting set of wide receivers. Losing Chris Culliver for the season means that Nnamdi Asomugha will take over on the outside if the Niners still plan on using starting cornerback Carlos Rogers inside in nickel situations.

For Green Bay, the main concern will be the same as it was a year ago — holding up against the Niners offensive line in the running game. No team’s starters lost more games to injury last year than the Packers, and although it turned out to be a good thing in some spots (Hayward taking over for Charles Woodson as the nickel corner), in others, it meant relying on backups not up to the job (Erik Walden replacing the now-healthy Nick Perry).

This one is worth paying close attention to, because if I had to guess, I’d say it isn’t the last time we see it this year.